Let’s find out in our review if Ender Lilies: Quietus of the Knights is really another valid metroidvania for Nintendo Switch

Write one review per Ender Lilies: Quietus of the Knights per Nintendo Switch it was a real treat for a reason. From the humble Xeodrifter of Renegade Kid, who today is better known (in part, at least) as Atooi, to the more noble and recent Hollow Knight, one wonders if that of the metroidvania is not a “too much” that is a “good thing”. We are happy to communicate, already at the beginning, that this is not the case at all. Side-scrolling platformers devoted to exploring a large map, including Bloodstained: Ritual of the Night and the upcoming Metroid Dread, are experiencing a second youth on the Big N hybrid.

By this we do not mean, however, that the gender is redundant, far from it. Just don’t expect Ender Lilies to reinvent the wheel because he will not. What the game has to offer, for reasons that we will explain better later, is “just” a very good exponent of the genre. The tones and the atmosphere are the masters, but under the hard shell of the aesthetics and presentation there is an even more austere (but still welcome, up to a certain point) gameplay made up of arduous fights and really hard to die bosses. And no, we refuse to dig up the Dark Souls jokes – they get bored after a while.

In the review phase on Nintendo Switch Ender Lilies: Quietus of the Knights gave us the reins, needless to do it on purpose, of Lily, priestess awakened in the gloomy and desolate realm of Finished. The curse called necropiggia he transformed the good people of the kingdom, from merchants to knights, into hideous monsters. It will be up to Lily, that is, us, to purify and save their spirits. The world of Finis, no longer able to react to the presence of the Unclean, has fallen into disrepair, and Lily awakens in a church lost in the ruins to remedy this tragedy. Okay, maybe a comparison with Dark Souls can fit here.

However, Lily remains a little girl helpless unable to defend himself, but luckily for us it will be a mysterious black knight who manages the clashes from the very first moments of the game. The grim figure will materialize in time to attack, remaining invisible during the exploration phases. Visually, the effect translates as the various Persona of the homonymous series (see if you make a comparison with the Arsene of Smash or that of Persona 5 Strikers). The ghost, in addition to composing the skeleton of the fights, will be only the first of the many spirits that will accompany us throughout the adventure. 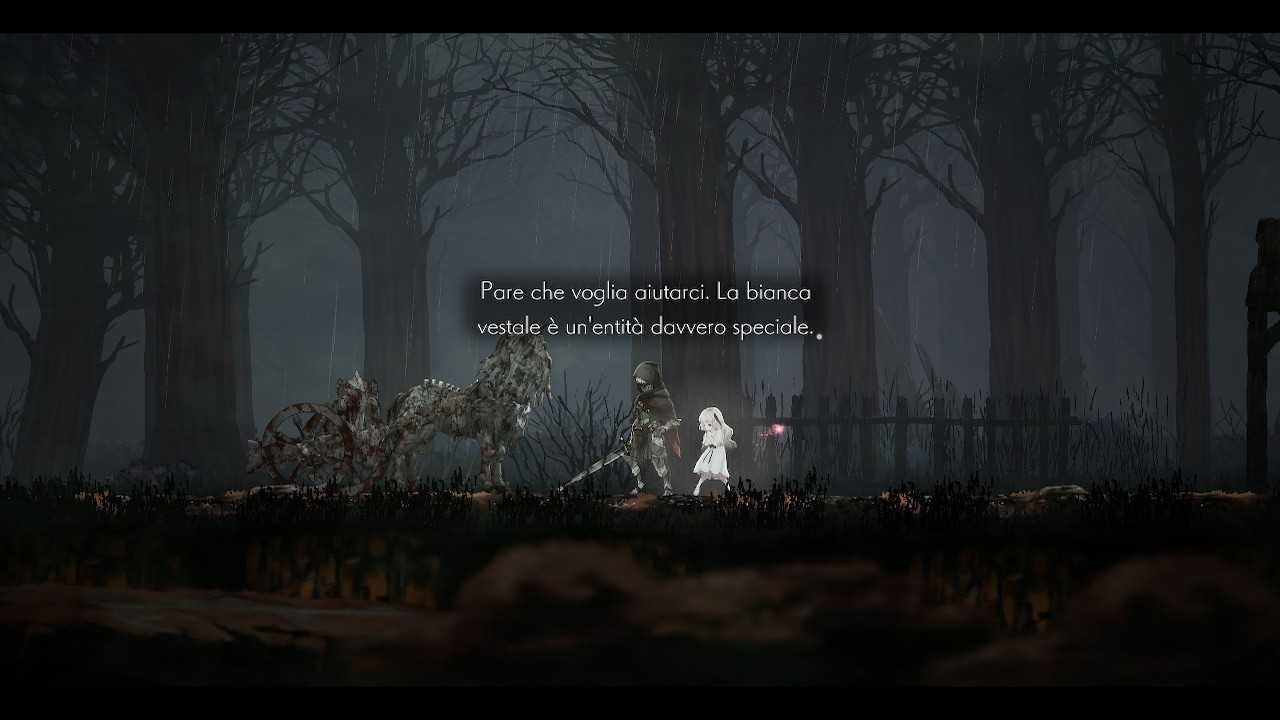 I boss certainly not lacking in the game world of Ender Lilies: Quietus of the Knights, but in the review phase in the Nintendo Switch version we found an extra incentive to defeat them. Usually, the only reward is progress. However, not unlike Crash Bandicoot 3: Warped or any Mega Man, we will literally come out stronger in this case. For each purified soul (and for each defeated boss) we will be able to use theskills central to our advantage. Whether it’s a hammer, a raven to attack with from a distance, or underwater swimming, there’s it all.

In order not to expire in the so-called “OP”, however, only six can be equipped at a time, divided into two groups of three that can be exchanged at the push of a button. In practice it is a combat system very similar to what Koji Igarashi has poured into Bloodstained: Ritual of the Night (to whose title, as well as for Castlevania: Symphony of the Night, this game alludes very clearly in its own), only a little ‘more immediate. In fact, we would dare to say that our object of analysis knew overcome their muses with an approach that is easier to customize, and for this reason at times even more elegant.

As you progress through the game, it is possible to obtain some tools organically, while venturing into the labyrinthine environments of the game. With these objects it is possible boost up their spirits, permanently increasing their effectiveness. In addition, benefits can be obtained through relics, such as increased attack power or an additional slot to heal. Finding them won’t be easy, but as with any metroidvania, progress makes exploration easier. In addition, without Shantae’s absurd unlock requirements, fast travel will be of enormous help to us.

Experimenting with various spirit sets is definitely encouraged, as Ender Lilies: Quietus of the Knights certainly he doesn’t go easy on the difficulty. While we strenuously refrain from comparisons with Dark Souls on a superficial level, a Souls-like soul in combat is more than present. While one enemy alone is hardly a threat, a multitude can cause serious problems for Lily if you don’t play cunning with the abilities of the spirits. Running and hammering the attack button is of little use, while the caution placed in waiting for an opportunity to counterattack is the key to winning.

In the boss fights of Ender Lilies: Quietus of the Knights, being reviewed on Nintendo Switch, we found that the latter follow a clear pattern in their attacks. However, as their health declines, their strength increases, enhancing their attack power and also affecting the variety of moves available to them. Dodge it’s absolutely vital to survive, and luckily the game doesn’t fail to provide you with a save point before each fight. We talked about experimentation, and each refreshment point allows you to do it after each defeat.

It’s not just the combat that takes its cue from Dark Souls, though. Even the way the same settings and the letters scattered around the game world they tell us the plot with the dropper is very similar to the classic from From Software. To be clear though, it’s a comparison that’s once in a while elevate the title we are talking about and also a lot. The exploration, if not for the objects, is very encouraging for those of you who want to build the intricate puzzle of the plot. There are plenty of snacks and morsels to pick up, but we can guarantee you it’s worth it. 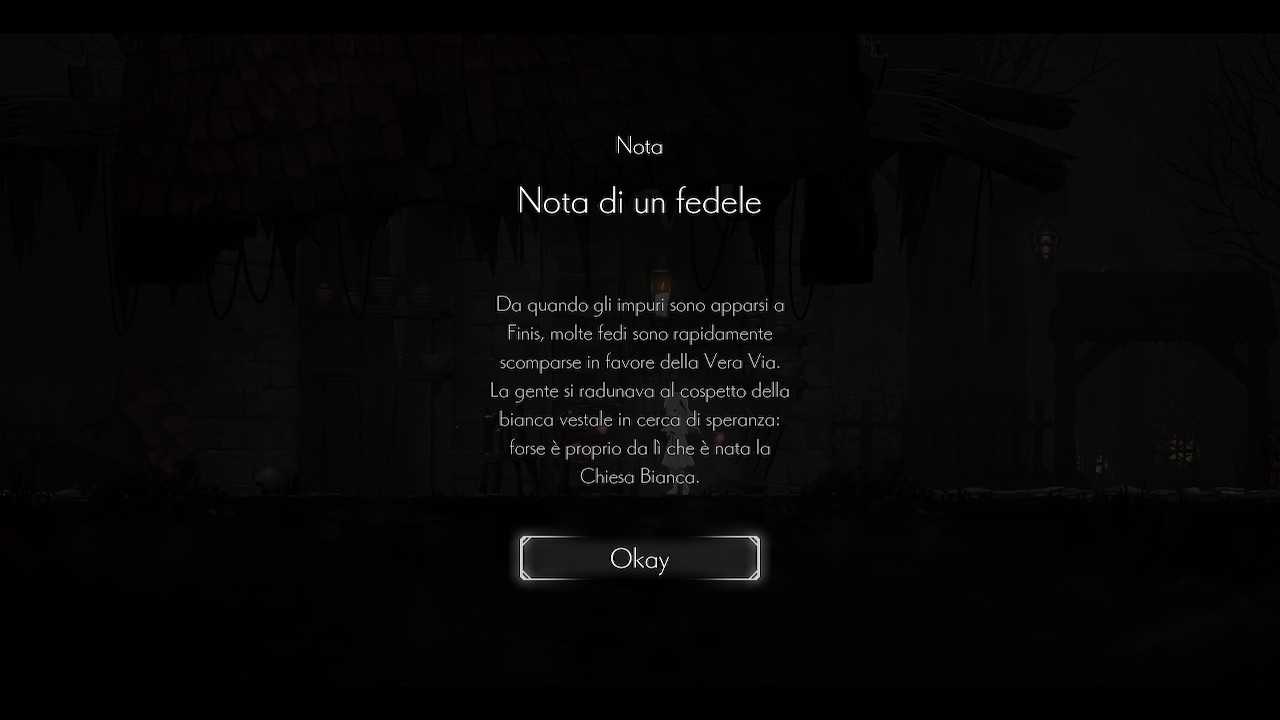 From software with love (and harmony) – Ender Lilies: Quietus of the Knights review for Nintendo Switch

The painstaking care of Ender Lilies: Quietus of the Knights leads us to talk about it well in the final bars of this review of the Nintendo Switch version. Starting from the graphics, although the gameplay is side scrolling it all benefits the phenomenal art direction visible on screen. Everything from the intimidating design of the enemies to the subdued glow of the fauna has been curated with an attention to detail that borders on the manic. If we consider the state in which Bloodstained has reached the hybrid of the Big N, by comparison this title is more than two inches above.

In a similar and complementary way to diving, the soundtrack it is simply stellar in its variety of instrumental pieces, from understated piano to orchestral pieces that wouldn’t be out of place at an Earthbound Papas concert. Some songs, in particular, just didn’t want to get out of our heads even after we finished testing the game. And since the development team’s official Topic channel is available, we thought it would be a good idea to share this pleasant “torture” with you, so you too get a taste of what awaits you.

It’s not that the title is exactly free from little ones drops in framerate; in many places in the game we have found them. It is never about serious problems, but in comparison to the wonderful ones sixty frames per second the dips in question are almost an eyesore. However, with what we have said so far, it seems more nit-picking than anything else. The game remains a true delight in graphics and sound, with excellent gameplay that ties the whole experience together. It is about one of the best metroidvania on Switch? Not only that, it is also one of the best of 2021, as well as one of the most curated exponents on the console.

Ender Lilies: Quietus of the Knights passes the test of our Nintendo Switch review with flying colors. The excellent graphics engine, with dull colors but also bright where needed, combined with the soundtrack will hold you by the hand in a memorable experience. The gameplay is an excellent glue, especially given the high potential guaranteed by experimentation. It is a sometimes tough title, however only the occasional drop in framerate separates it from ten with academic kiss. For twenty five euros and a minimum of fifteen hours to complete, it is definitely worth arousing the knights from their silence.

A dark and brutal but extraordinary metroidvania