Zagreus is back once again to try to escape from Hell: let’s find out together, in this review of the PS4 version, if it’s still worth getting Hades back in hand

It’s hot. In these days of this damn sultry summer, many of you will be on vacation or on vacation perched by the sea. Many others, as well as those who write to you, do not even see the shadow of holidays and do nothing but say, between one working day and the next, that it’s hot. An alienating heat, which empties your soul. And what better way to survive the summer heat than to roll up your sleeves and once again face a long and exciting adventure rising from the depths of the underworld? No, we’re not drunk and it’s not the high temperatures that make us chatter … maybe. Sit here next to us: Zagreus is back.

We have talked extensively about Hades in a rather verbose review of the Nintendo Switch version that you can find by clicking here. The Supergiant Games title is coming tomorrow, August 13, finally also on the current and last generation consoles (PS4, PS5, Xbox One and Xbox Series X | S) and we had the opportunity to get back to the Supergiant Games game , after an unexpectedly long exclusive for Nintendo’s hybrid, at least on the console side. If you are among those who have never played Hades, what are you waiting for? Go and do it immediately. If, on the other hand, you already have hundreds of hours on PC or Nintendo Switch and want to know if it is worth buying it back in the console version, follow us in this new review of Hades in its PS4 version!

Since always, starting with Bastion, Transistor and then arriving at Pyre, the guys of Supergiant Games have never had, as a purpose, the idea of ​​creating sequels to their titles. Precisely for this reason, in the console version of Hades you will not find any kind of additional content unrelated to the previous one for Switch or PC. We then found ourselves once again taking on the role of Zagreus, the little-known son of Hades, in his attempt (or rather countless attempts) to ascend from the depths of the underworld to the surface. The reasons that will lead him to have this sort of “teenage rebellion”, in full contrast with his father’s will, are revealed practically in the very first hours of the game. In order not to ruin anything, however, we avoid revealing them in the review.

Hades is in all respects an action-rpg in isometric roguelike view. This means that each Zagreus escape attempt will correspond to your match, at the end of which, whether you win or not, you can return home with a long list of materials and knowledge of the impressive game world. And you will have to be mentally prepared because, although the game mechanics of Hades are quite simple and intuitive, to learn how to use them really well and finish the climb the first time you will still need a few hours, depending on your experience with the titles of the genre. . And above all, you will need to be prepared for it is once the surface is reached that the real Hades begins. 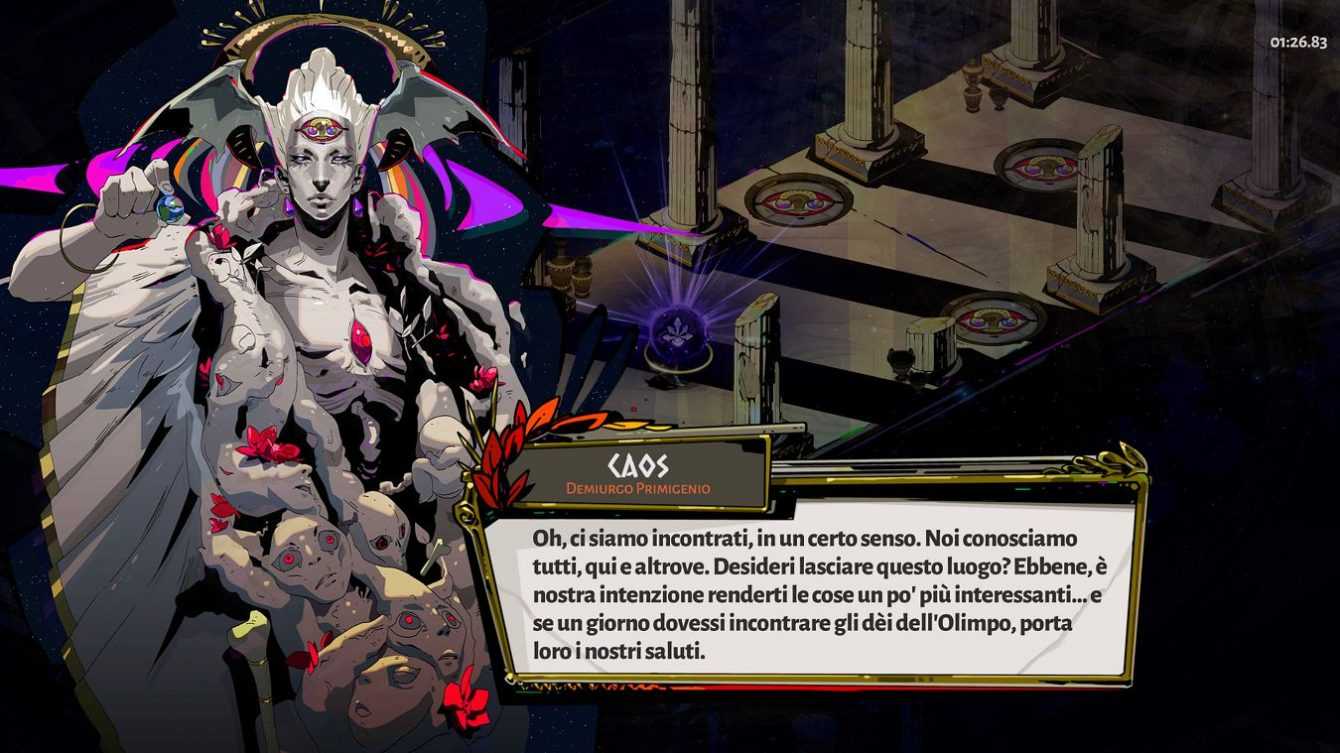 The fascinating and addictive gameplay of Hades will lead you to gradually ring more and more games and defeats, never frustrating and fruitless, in a whirlwind of hours stolen from your incredibly devastating daily life. We assure you that we are absolutely not exaggerating: playing Hades is a real drug, if you let yourself be taken by the adrenaline action, the depth of the mechanics and the incredible responsiveness of the command inputs. Fans of the genre will find bread for their teeth also thanks to the many possibilities for customizing the difficulty.

If we accompany the excellent gameplay of Hades with an exuberant, unique and incredibly interesting narrative, you will understand well why the final product got, in our review for Switch, a vote practically close to perfection. Supergiant Games has been able to reinterpret the Greek-Roman mythology that we all know perfectly in pop sauce, creating interactions and relationships between the various mythological figures and our Zagreus full of meaning and food for thought. As well as witty jokes and damn funny dialogues. 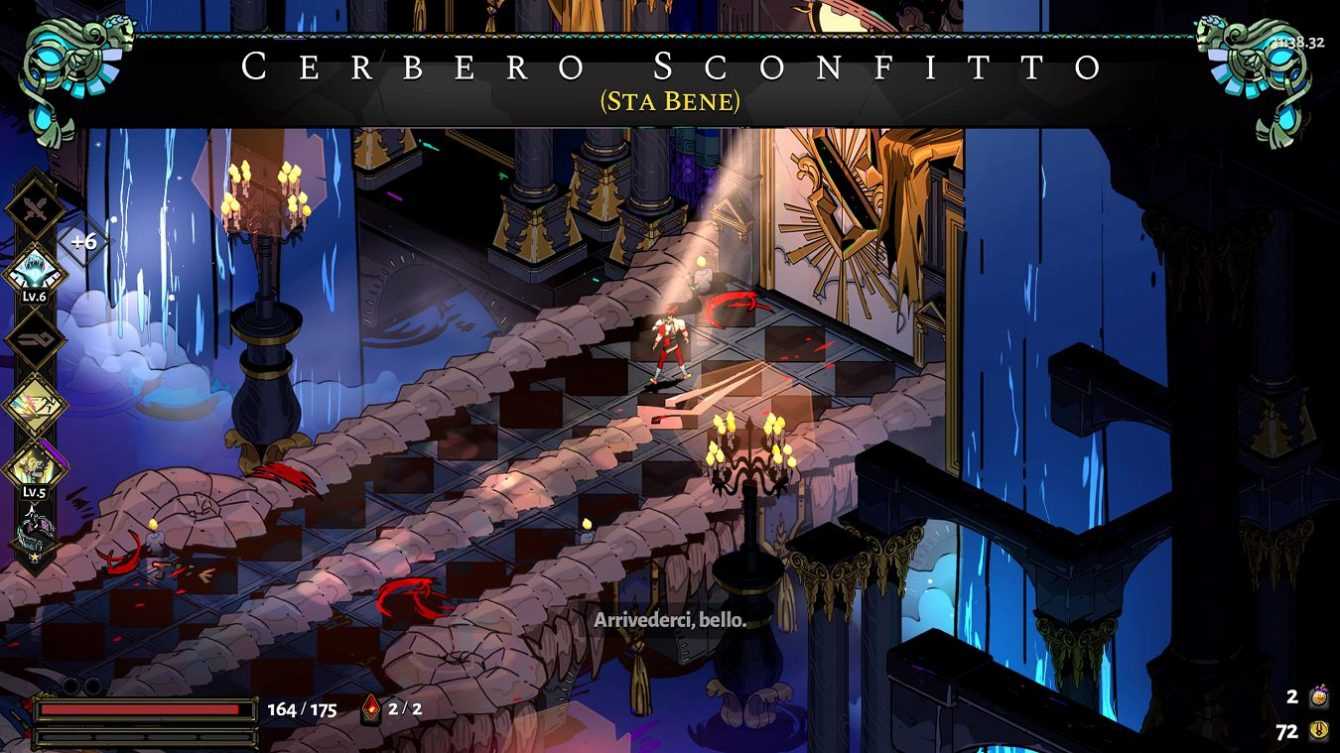 There is also the little Cerberus – Hades PS4 review

From Achilles, friend and teacher of Zagreus, at his side at all times both physically and spiritually, to Hypnos, an eccentric entity who will greet us every time we return to Hades. From the infernal hound Cerberus, a sweet three-headed dog who bends over to the cuddles of his master, to Nyx, “mother” and consultant to a young man in the midst of adolescent crisis. The various figures present have all been reinterpreted by Supergiant Games, both temperamentally and aesthetically, in a superfine way, original and terribly interesting. All interactions with Zagreus will bring some more information to your Code, expanding dramatically what is, in effect, a new Olympus. Or rather, a new Hell.

We don’t want to bore you further by giving you details on gameplay and script, because we went through them thoroughly in our old Nintendo Switch review. As mentioned at the beginning, in fact, the version arrived on the new and old generation consoles is practically the same in terms of content, so we refer you directly to what was written in February to get a complete overview of the game. What we will deal with in these last paragraphs of review is, of course, the technical department of Hades on PS4 Pro, the hardware used in this case to evaluate the porting. 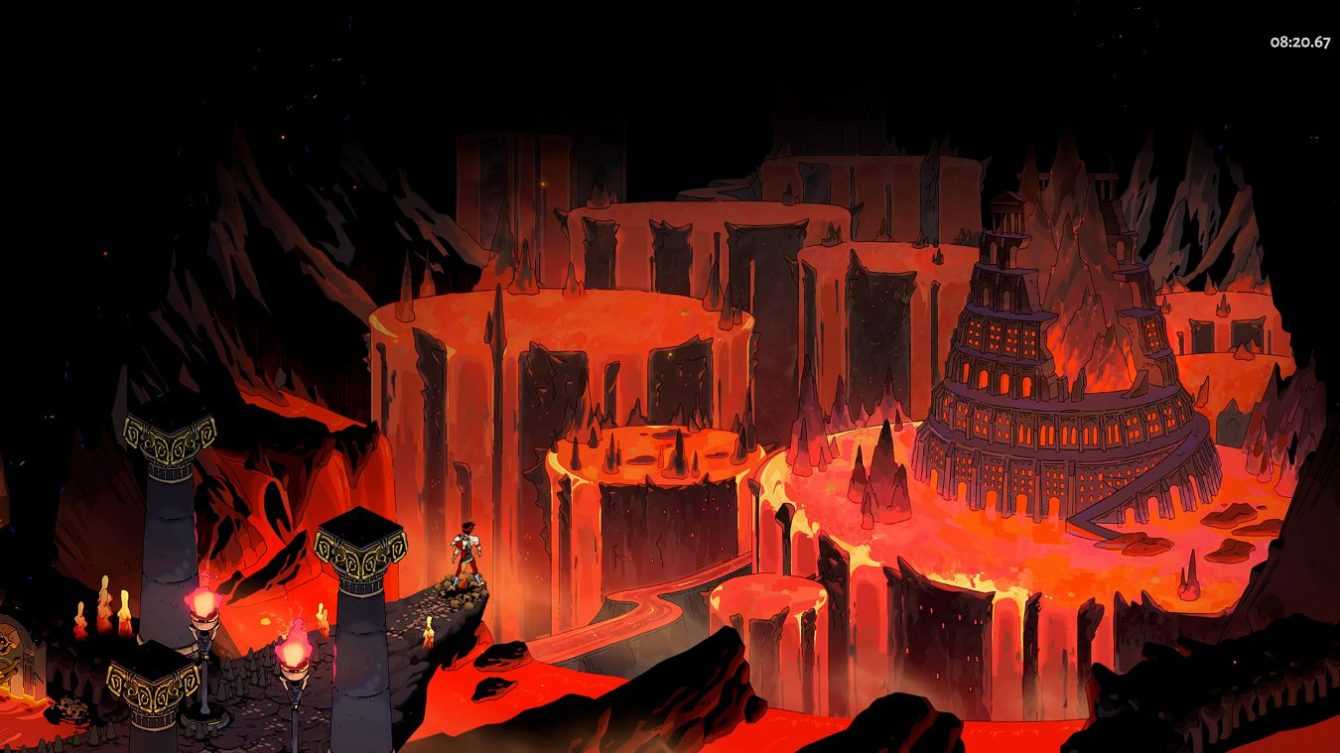 While we weren’t on a next-gen machine, the Supergiant Games title performed remarkably well on our proprietary PS4 Pro. Hades runs stably at 60fps, without any kind of slowdown even in the most hectic situations, at a resolution of 1080p, which makes the various rooms of the dungeons and the rendering of the magnificent sprites created by the team even more fascinating when compared to the 720p of Nintendo Switch. On PS5 and Xbox Series X | Yes, on the other hand, the game runs stably at 60fps at 4K resolution. We are aware of the implementation of some features regarding the Dualsense controller from Sony, but having not tried the title on this machine we refrain from any kind of comment.

A small side note that, if you like, could be considered a “lack” compared to the version for the hybrid console from Nintendo. What has obviously been lost with this port is Hades’ game and go nature, peculiar feature of the portability of Switch. It is not so much a defect, as a criterion of choice if you have never tried the Supergiant Games title and want to choose between the various versions available. A real inconceivable defect is, however, the complete absence of saved games shared between the various versions of the game, present instead between that Nintendo Switch and PC. So resign yourself: if you have already spent hundreds of hours in the company of Zagreus, you will have to start the climb all over again. 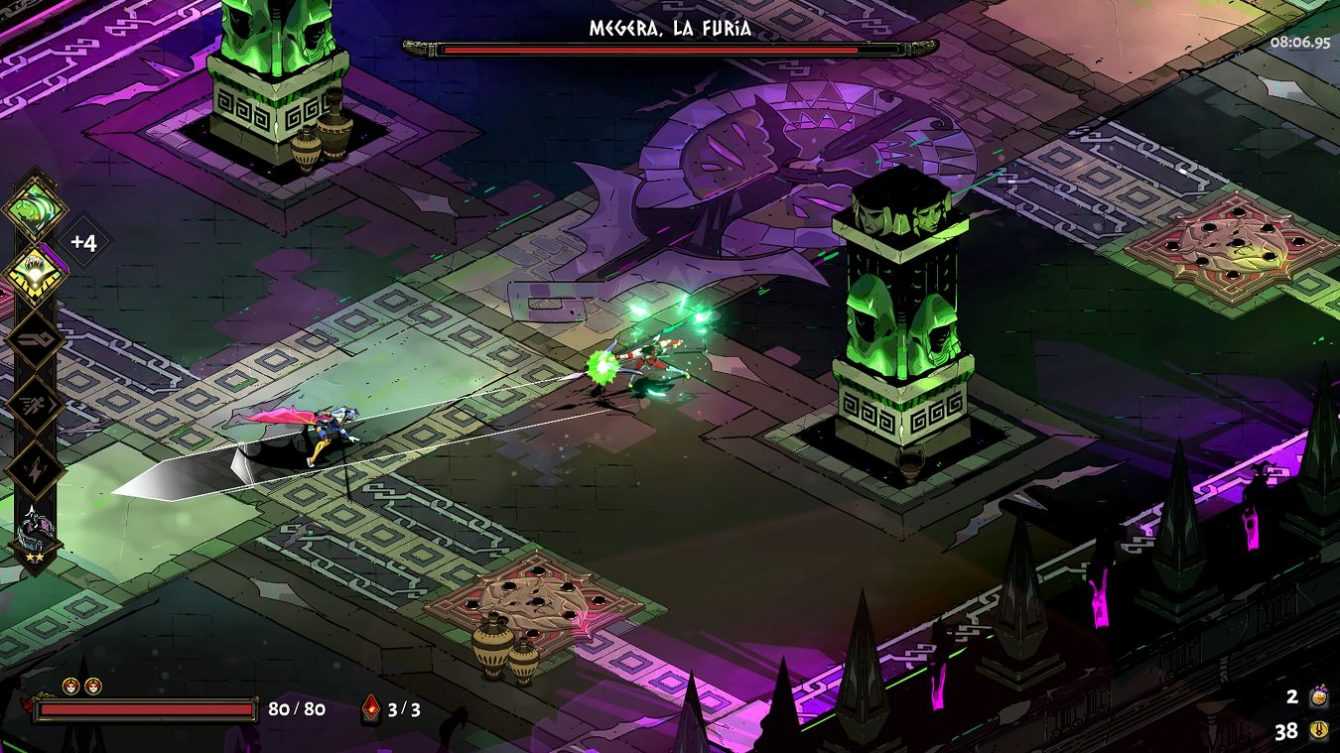 … And what does it matter?

To wrap up this review of the PS4 version of Hades, we still can’t find any reason not to recommend the game from Supergiant Games. In this version you can have the compromise that many were looking for between the Nintendo Switch version, certainly less powerful but more immediate, and the PC version, which technically remains obviously the top among all those available. If you’re willing to forgo the Switch’s portability and hit-and-run type of experience, and also don’t have a PC capable of running the title, this is definitely your best option. And then let’s face it: who can really make one game of Hades?

Hades is currently available on PC and Nintendo Switch and will be released tomorrow, August 13th, on PS4, PS5, Xbox One and Xbox Series X | S. Have you already stripped the Supergiant Games title? What do you think about it? Write it to us below in the comments, we will continue to keep you updated with all the news, guides and reviews on videogame and tech! And if you are interested in game keys at affordable prices, we recommend that you take a look at the InstantGaming catalog!