The Halo saga has marked the lives of many players on Xbox 360, but the need to move towards the future ultimately leads to the closure of the servers, at a rather close date.

Online games are titles difficult to maintain: they need constant support from launch and a team that is fully responsible for managing servers and players. Halo has always been incredibly successful on Microsoft consoles, even after Bungie, one of the original developers of the saga, decided to become independent. Having said that, sooner or later we must let go some games, also to give way to create new ones. So, the Xbox 360 Halo titles that have so far always had their online servers open will soon see closure, after the date initially decided at the end of 2020. it was later moved.

Halo on Xbox 360: the official date of the server shutdown

In December 2020, Microsoft and 343 Industries had explained the situation, stating that the shutdown of the servers was necessary, since the time taken to maintain them online prevented the possibility of create and support new video games. However, this would not have taken place until the established date, or December 18 of the following year, and would have affected all the Halo that they used technology 360 games. This meant that the Master Chief Collection would still be playable, as it was based on the Xbox One system. At the time, Microsoft also removed the option of buy digitally the securities concerned, to avoid inconveniences. 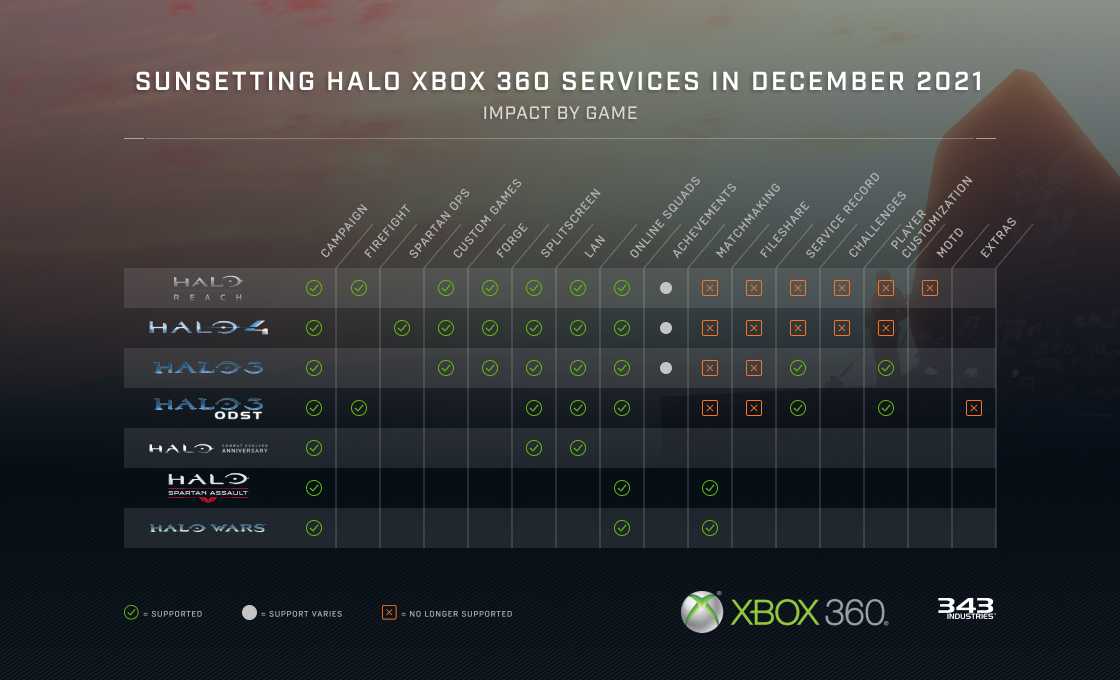 The chapters that will undergo this intervention are Halo: Reach, Halo 4, Halo 3: ODST, Halo: Combat Evolved Anniversary, Spartan Assault and Halo Wars. The official announcement took place just a few days ago, with a post clearly exposing how Xbox 360 online multiplayer servers will start when shut down. not anymore on the announced date, but postponing the matter a little further, as of January 13, 2022.

Answers are provided to most common questions that fans could ask themselves, as well as attaching a graphic showing the features that will no longer be available once the online multiplayer mode is closed. Meanwhile, the Halo: Infinite campaign has finally been revealed, which maybe it could be a worthy replacement to the now obsolete titles.

Keep following us on TechGameWorld.com for more gaming news, and check out the Instant Gaming store for low-priced games.