Horizon Forbidden West, the new title by Sony e Guerrilla Games, has finally been released and many players are having fun exploring the mysterious western lands. The prehistoric-futuristic world of the game is very fascinating indeed, but it also hides many pitfalls. In fact, exploring these lands you will surely come across mammoth mechanical creatures and very unfriendly groups of human beings.

Fortunately Aloy is a great fighter and has all the credentials to face any danger. Unfortunately, however, her ability is not everything and to face the dangerous enemies of the west you will also need the righteous equipment. For this reason we have decided to write this guide, where we will tell you about some of the best weapons of Horizon Forbidden West and we will also explain where to find them.

The best weapons of Horizon Forbidden West they are not very easy to find and as a result, it may take some time to get one. For this reason, before talking about the most powerful equipment, we want to mention you the most useful ones to use in the early game.

First we want to talk aboutHunter’s Bow, the game’s starting weapon. Despite being very simple, this tool is perfect for facing a large number of different opponents. Thanks to its wide range and its fairly high damage you can in fact kill human enemies very quickly and give a lot of trouble to the machines. Forward the bow also owns one upgrade slot which, if used well, will allow you to make it even more effective in the early stages of the game.

In addition to the bow, another very useful weapon for the early game is the Frosty Slingshot. This weapon is capable of dealing very high damage and is also capable of applying it status congelamento. Freezing will allow you to slow enemies while making them more vulnerable to damage from other weapons, making them perfect for use against more agile machines. Scourge of the Sun – Horizon Forbidden West: guide to the best weapons

Now is the time to talk seriously about the best weapons in Forbidden West and first we will start from Scourge of the Sun.. This very powerful hunter’s bow it is capable of dealing devastating damage from long range and is capable of flinging arrows infused with the elements fire, ice and poison. As if that were not enough then this weapon also possesses well five upgrade slots and many passive perks which will further improve its performance.

To get this very powerful weapon, however, you must first clean up all the rebel camps scattered around the game world. Basically the camps there are only fivebut once you have freed them all you will have access to a secondary mission that will take you up to a sixth secret camp. Once you destroy this camp as well, you can finally get your hands on the Sun Blight.

The Sky Slayer is a devastating thunder-thrower that will allow you to annihilate any enemy with ease. This weapon is in fact capable of launch both incendiary and explosive attacks, making it suitable for facing armored and non-armored opponents. In addition, thanks to the presence of five slots for the upgrade, you can make it even more devastating than normal.

The Sky Slayer is certainly the best weapon in its class, but unfortunately it will not be possible to obtain it quickly. In fact, to get your hands on this tool you must first complete “GEMINI“, one of the last missions in the main story. You will then be able to access “The way home”A very long side mission which once completed will reward you with The Sky Slayer.

Wings of the Ten – Horizon Forbidden West: guide to the best weapons

Let’s now move on to Wings of the Tena very powerful one legendary slingshot. This weapon is capable of firing adhesive bullets able to immobilize enemies making them easy targets for your attacks. just remember to act quickly after blocking an opponent, since the effect of the weapon does not last too long.

This weapon is also quite difficult to obtain, given that to unlock it you will first have to collect all 12 black boxes sappeared for the game map. Also to access some of the black boxes you will need advanced tools that you can only get by doing a lot with the main story. If you are interested in finding all these special collectibles, below you can find a simple list of the areas in which they hide: The Ruin of Carja it’s a warrior’s bow specialized in close range combat. In fact, thanks to this weapon you will be able to deal serious damage very quickly enemies stupid enough to get too close to you. In addition the Ruin of Carja also uses armor-piercing bullets and is capable of inflicting fire elemental damage add-ons that will allow you to quickly knock down even the toughest ice machines.

Unfortunately however this weapon is one of the most difficult to obtain of the whole game. In fact, to unlock the Ruin of Carja you will have to first Complete all four Challenge Races in the game. These races are nothing but races in which you will have to ride a car and be the first to complete a predetermined path. On the surface, this challenge may seem simple to you, but in many cases it will not be easy at all to get to the top of the podium.

Pride of the Creator – Horizon Forbidden West: guide to the best weapons

Unfortunately, the Creator’s Pride is the hardest weapon to obtain in Horizon Forbidden West, as you’ll need to complete a major challenge first to find it. Before you get your hands on this tool in fact you will have to complete all the tests of the hunting grounds by obtaining the maximum score.

Of all the hunter’s bows in the game, Shadow Seeks Death it is certainly one of the most effective against machines. This weapon specializes in the destroy the armor of the enemies electrocuting them at the same time thanks to its very powerful electric arrows. Plus this bow is also extremely fast and consequently will allow you to hit even the fastest enemies with a large number of arrows.

To get this excellent bow you will first need to gain access to the Arena and subsequently participate in a large number of challenges to get medals. Once you have accumulated a total of 80 medalsyou can finally go from Dukka to the Maw of the arena and exchange them for the Shadow Seeker Death. Fall of the Forge – Horizon Forbidden West: guide to the best weapons

The precision arcs they are weapons designed to inflict very high damage from great distances and among all those present in the game the best is certainly the Fall of the Forge. This very powerful weapon is in fact capable of fire both piercing and plasma arrows, and has five slots for the upgrade that will allow you to make it even more lethal. The only downside to the Fall of the Forge is his low rate of fire but, considering that it is designed for long distances, this problem is easily negligible.

To get this weapon you will have to follow the exact same procedure that we told you about in the previous paragraph. Even in this case, in fact, you will have to face a large number of challenges in the arena and bring Dukka 80 medals.

The Explosive Forge is perhaps the most powerful piece of equipment ever in Horizon Forbidden West. This devastating weapon is capable of decimating even the largest and most powerful opponents with ben three different types of armor-piercing shells. Also, thanks to ammunition explosiveis also capable of easily decimating small groups of enemies.

The Blasting Forge is certainly a devastating weapon and also in this case to get it you will have to earn 80 medals in the arena. This means that if you want to get all the legendary weapons of Dukka you will have to accumulate a total of 240 medals.

Return of the Ancestors – Horizon Forbidden West: guide to the best weapons

The Return of the Ancestors is a very special weapon that will allow you to throw a energy disc which will strike the enemies and then return to you. Once the bullet is close enough you can try catch it on the fly with the right timing and, if you can, the next cast will do more damage. In this way you can increase the power of your weapon more and more and inflict a lot of damage while wasting very little ammunition.

This weapon is very powerful and fun to use, but unfortunately it is not easy to obtain. To find the Return of the Ancestors you will have to collect as many as nine ornaments and deliver them to Stemmur. Below you will find a list of places to find all the ornaments: Ready for the hunt

This concludes our guide to the best weapons in Horizon Forbidden West. Now all you have to do is explore the game world and try to get them all. However, if you are interested in learning more about the new Horizon, then we suggest you dtake a look at the other dedicated articles present here on our website:

Horizon Forbidden West is now available for PS4 and PS5. If you are interested in staying up to date with all the news on the world of video games and much more, then continue to follow us here on TechGameWorld.com. Furthermore, in case you want to buy some games at an advantageous price, we suggest you take a look at the many offers on Instant Gaming. 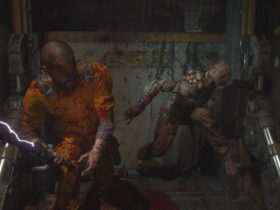