Intel breaks into the market with the new 12th generation CPUs, and we will tell you ours in the i5-12600K review

We have in our hands one of the new processors of the recent family Alder Lake home Intel. The manufacturer of Santa Clara with this family of processors it has set itself only one goal, that of earning and in some ways snatching a good slice of the market from the red team, proposing a family in an improved version, but above all more mature.

In breve, Alder Lake, brings a breath of fresh air not only to the consumer market, but also simply in terms of engineering innovation. At the examination of the new structure we find ourselves in front of the first structure dedicated to desktop CPUs produced in 10 nanometers by Intel.

An architecture that evolves with respect to the classic structuring of a Package, here, now, we have what is called a hybrid, high-performance architecture. Alder Lake CPUs boast both High Efficiency Cores and High Performance Cores, does that sound familiar? If it is, it is because you are thinking about the structuring of processors dedicated to the Mobile world, and you are not mistaken, because the idea is very similar. We have also dwelt too much, so let’s get to the heart of the review of this Intel i5-12600K, and especially find out if this CPU is right for you or not!

Let’s start by saying that this new generation is completely different from the previous ones, also in the reading of the technical specifications, and we will explain it starting from the structure itself.

Unlike previous generations, we are not dealing with a single Package structure, here we have two souls and one body to use a metaphor. In fact we will have one dedication area to host those who are called P-core (Performance core), and the area dedicated to hosting E-cores (Efficient Core). For the former, Intel relied on the consolidated and reliable Golden Cove architecture, for the latter it opted for the new Gracemont structure, this allowed them to be able to build a CPU capable of handling a excellent performance / consumption ratio, but above all a central communication system that manages the two structures super efficiently and in real time, like a sort of director, it is not by chance called Intel Thread Director.

And here lies the real innovation brought by the giant Intel, this chip mentioned above is able to understand when to activate one or the other group of processors, so as to guarantee maximum performance, but related according to needs, to real needs. Are you watching a movie? Will the Golden Cove processors not be called into question, move on to work on a heavy project loaded on Adobe Premiere? The film will pass in the background and will be entrusted to Gracemont processors, by activating the Golden Cove processors for the most demanding Threads, all managed automatically by the Intel i5-12600K and, all while the user does not notice anything, as we will see later in the review.

In fact, this control center will constantly communicate with the operating system, and on the basis of millions of factors, including the performance of the TDP, will manage the structuring of the work. If that wasn’t clear enough so far, we’ll simplify things with two words: artificial intelligence.

Intel has made extensive use of this new frontier of science to make its processors smarter, password, maximum efficiency, lower consumption. This is the key equation to follow. In fact, in order to achieve this, Intel had to collaborate closely with Microsoft. Without the accompanying software, these features could never have been effectively exploited. In fact, with Windows 11 the innovative Intel Thread Director controller is perfectly managed and recognized. But even with Windows 10 it is possible to take advantage of these functions. But beware, Linux and Chrome OS are also working on its support.

The new Golden Cove are the most powerful and efficient processors ever made by Intel, which spared no expense, even inserting a single controller dedicated to each Core, which communicate with each other in real time. This structure has allowed the extension of the Cache, a better management of the buffer, and the expansion of Hyper-Threading. In support, the Efficient Cores represent the real winning move of Intel. With the same clock, speed and efficiency significantly higher than previous generations.

We welcome DDR5 and doubling the bandwidth | Intel i5-12600K review

The innovations brought by Intel certainly do not end here, because we obviously have the support for DDR5 e, al PCI Express 5.0.

For what concern Express 5.0, literally doubles the available bandwidth for video cards and storage devices (able to exploit it for both software and hardware reasons), already very high bandwidth in 4.0 solutions. All 12 Gen Intel CPUs specifically support 20 PCI Express lanes, to be precise, actually 16 PCIe 5.0 and 4 more PCIe 4.0. As for the memories instead, Alder Lake has a controller that manages two channels, this means that it supports memories DDR4-3200 and the new ones DDR5-4800. Are DDR5 RAM just a crude performance boost to raise the numbers? No, not at all, they are an architectural requirement (at least for the most powerful solutions, and for specific software where you can really appreciate the clear leap forward). The multi-layer multi-core structure requires huge data flows to ensure correct operation, for this reason the DDR4 bandwidth flow is significantly lower, and represents a problem if you have to exploit all the power. The transition will still be slow and gradual, in fact at the moment you will find both motherboards with support for the new DDR4 and DDR5, always Z690.

But what changes with the new Z690 motherboards? The most visible changes catch the eye already by observing the socket, which changes physically, now it is called LGA 1700, able to support new CPUs with up to 8 DMI lines now, now in Gen 4.0.

Differently with regard to the P (Performance) -Core, we have a 3.7 GHz Base Clock, and a 4.9 GHz Boost. In terms of consumption, on the other hand, we have the data, at least indicative, of 125W come Base Power, and a maximum target of 150W, to support the operating mode Maximum Turbo. We have the integrated iGPU, and it’s one UHD Graphics 770.

The numbers do not say everything, especially the benchmarks, they are not indicators of real performance in everyday use, but this is certainly not always the case, you need to make a distinction and know how to interpret them. For this reason, we certainly conducted several tests to measure performance, but mostly during the test we focused a lot on analyzing the structure of the CPU, trying to understand the management secrets of energy efficiency, and how P-cores alternated with E-cores.

Starting from Geekbench 5, we wanted to see the summary performance in Single Core e Multi. Performances that have returned safe values ​​comparable with a Ryzen 5 5600X, indeed, even surpassing it in different contexts. This i5, being specialized in performance / consumption ratio, and having a preference for Single Thread operations, it shows a perfectly balanced processor.

Balanced in the vast majority of the operations we perform daily, except for specific uses. These great performances in Single-Thread, combined with as many excellent performances in Multi Core, make it perfect for Gaming.

We then ran a performance calculation test in OpenCL, for the Integrated GPU, and the result places it firmly in a medium-high range. Target to which Intel strongly aims with the i5 series. 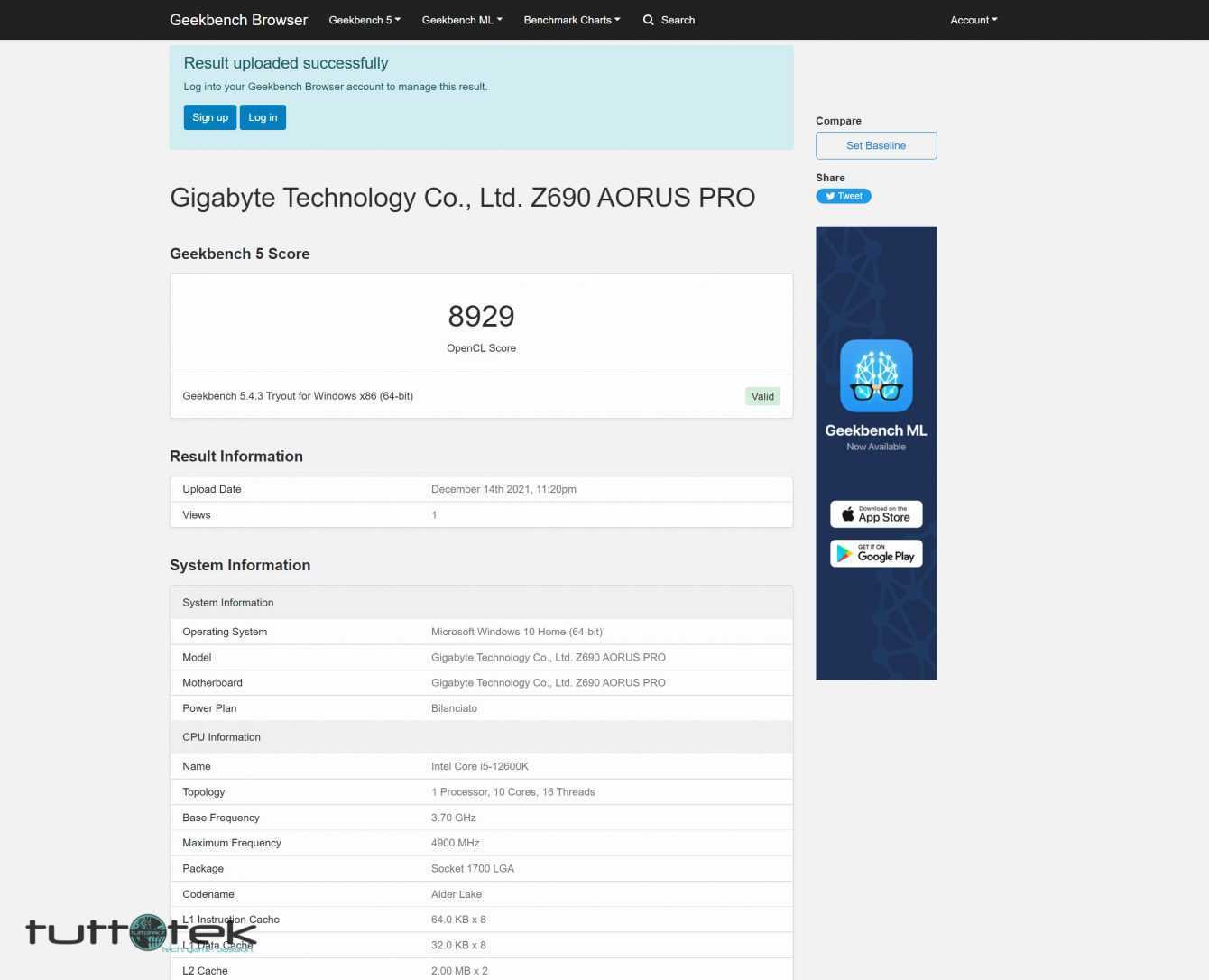 Moving instead to another software that we have used, that is the well-known Cinebench, we found really interesting values. With the version of Cinebench R20 in Multi we obtained a trend that fluctuated between 6000 and about 6100, always stable, with many applications in the background, on the other hand, we reached about 5600.

In Single Core, on the other hand, we touch about 700, with a trend between 650 and in fact, 700. These are truly incredible performances for the market segment to which this processor is proposed.

But let’s now analyze the performance trend of the processor in question. 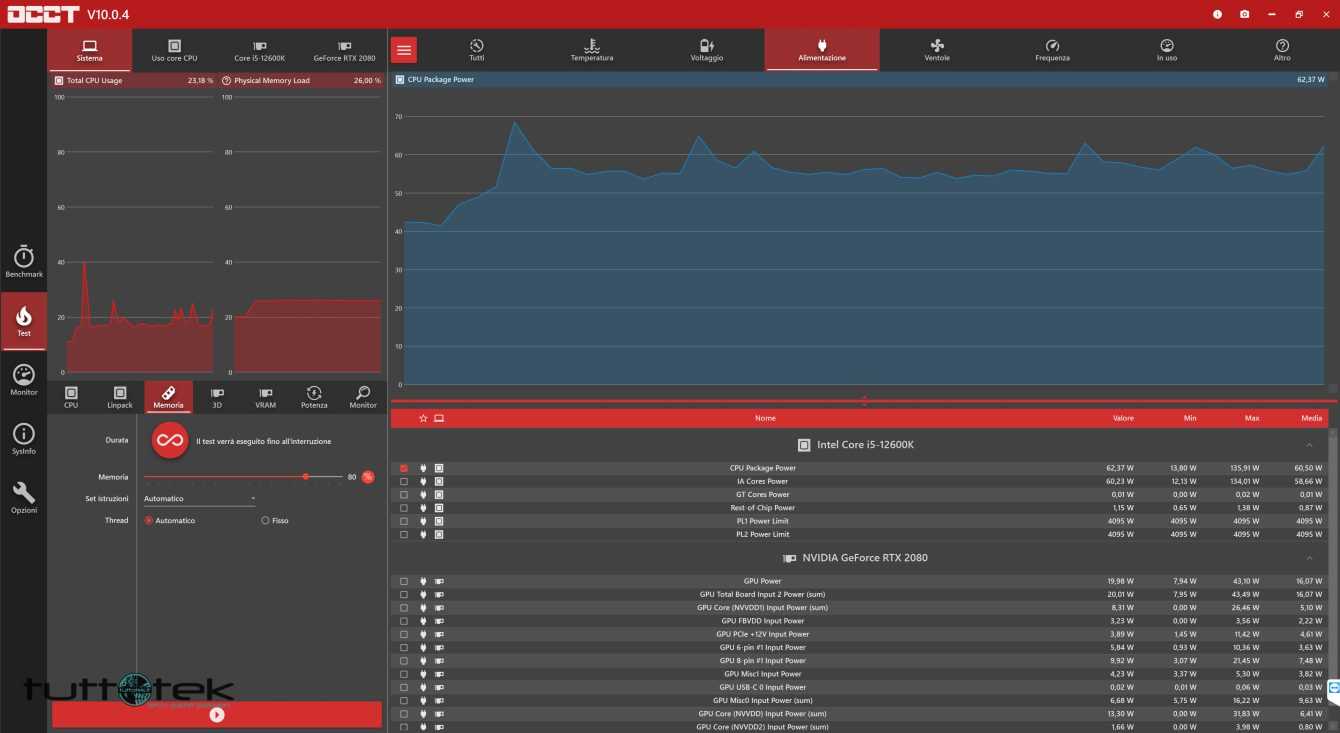 This is the trend recorded during use purely in Single Core, therefore, with applications that took into consideration some cores of the E-Core group, keeping the P-Cores almost deactivated. Despite the very high performance generated, especially for applications that yield Single Thread flows, we have found excellent consumption management.

At the very least, the oscillation was between a constant minimum of 40 W to a maximum of 50/55 W, the equivalent of a 3-4 year old laptop, an efficiency, which compared to the generated single Core performance is really excellent. During testing for our review, this Intel i5-12600K did register of the minimum peaks at 60W, but they are not the constant.

The SiSoftware Sandra professional diagnostic application highlights the performance flow of the E-Cores. We therefore note a linear trend, a good constant band, and excellent performances given by the Cache. The new management system works well, and you can see it clearly.

We continue our review of this Intel i5-12600K with the analysis of the Max Vattage. If instead we go to recall the P-Cores, we do not exceed the actual 130W. Are so many? On average, certainly there are not few, but we are talking about a quantity of Wattage that during daily use, especially in games, is difficult to reach, but this threshold makes us understand how the trend with more software and applications can be. light. Like the Game, simple web browsing, and “Office” work, it travels between 30 and a maximum of 70 Watts, which for the performance it is able to offer is not bad at all.

Let us remember that it is still a K series, and therefore in the DNA it has the ability to go much further, so this trend value is more than normal.

The internal thermal management is also good, compared to our system, and, at the Max W. achieved, it is not bad. As you can see in a trend that very much recalls the use of P-Cores, performance always remains constant.

Let’s analyze instead about 50 minutes of … 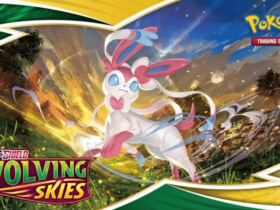 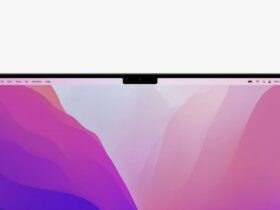 Apple explains the notch on the MacBook Pros

Acer Chromebook 314 review: not for everyone