It is now a sort of trilogy: after having dedicated our previous one top 5 to the best optional clashes of the series, let’s move on to the other category excluded from the list of the most iconic opponents and draw up, for the last time, a list of boss taken with both hands by Kingdom Hearts. Specifically, this time the focus will be on the antagonists at the center of the final battle. For this reason, and we tell you in advance, expect some colossal spoilers on each of the games involved. The main reason why we warn you is, after all, also the same for which we are here.

In fact, we are here to celebrate the relatively imminent arrival on Nintendo Switch of the entire saga, that is Kingdom Hearts Integrum Masterpiece. The list of games in this collection for now exclusive to the cloud consists of the first of the two rules of the ranking: only one example per game. It is not a prerogative to be taken for granted: Birth By Sleep, after all, technically has four different final bosses (five, if we count Final Mix). The second rule requires that every fight, in order to be classified as “conclusive”, must come after the last save point of the game.

“Go to that country, Mister Hyde”

And speaking of Kingdom Hearts: Birth By Sleep, this is where our top 5 of the best final bosses starts from. But which one will we have chosen? We decided to opt for the inner Vanitas, namely Ventus’ last opponent. The clash takes place inside the heart of Ventus (it’s a complicated story, but we tried to better explain the terminology of the series) and follows three fundamental revelations in the arc of the saga. Not only are the Nesciens all from Vanitas, but the latter is literally the dark side of Ventus snatched from him years ago.

The third revelation, however, surprises the longtime fans the most: in a burst of irony, the director of the series Tetsuya Nomura has given this cruel antagonist the same face and the same voice as Sora (in both dubs). Just to blend as many designs together as possible, Vanitas takes on the pose of Riku in combat. To make the conclusion of the story of Ventus phenomenal, there is a particularity: theDimensional Union, Birth By Sleep’s reinterpretation of the invocations that alters the moves available to us, here it is forced with Vanitas himself. The result are contextual attacks very spectacular. 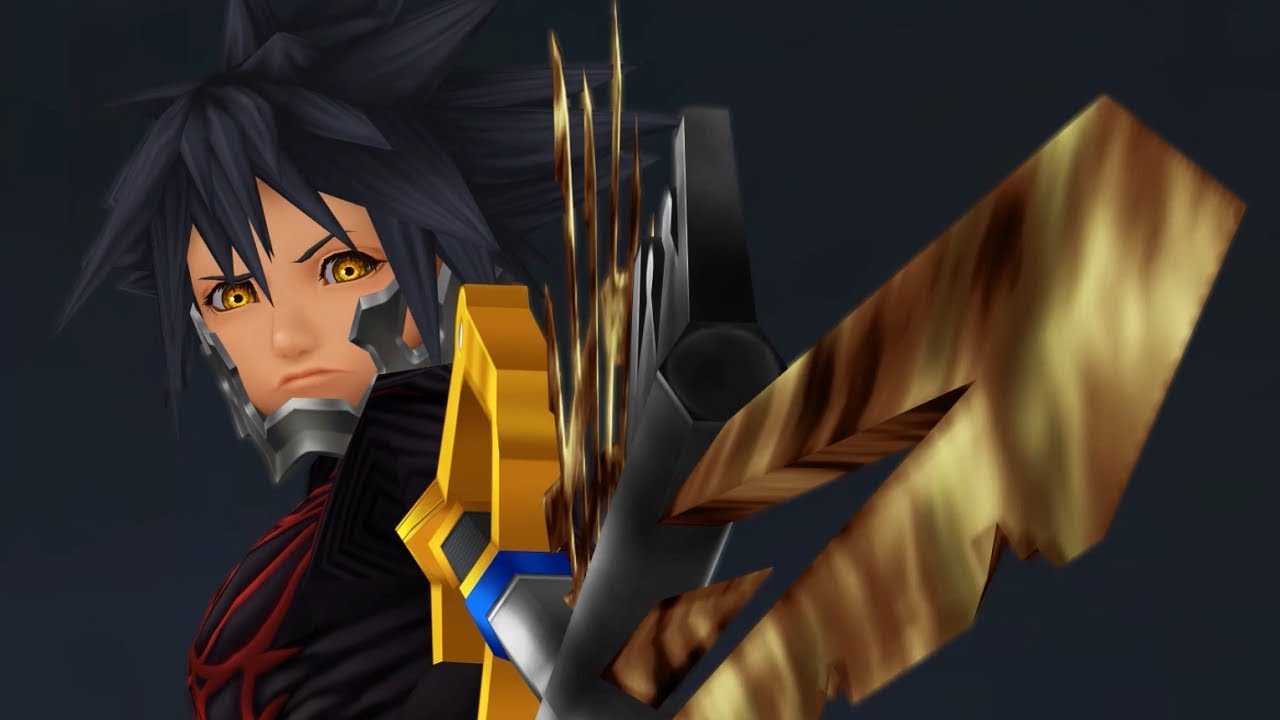 The top 5 continues with a very old-school final boss: that of the very first Kingdom Hearts. As we recalled in our cube root “universal bible”, the Heartless are manifestations of pure darkness, which in terms of design translates into demons with mostly rounded and “cute” shapes. And then we have Ansem, follower of darkness, which at the end of the adventure challenges us to a duel and then leaves us in the company of a huge Darkside. During the battle, however, it is evident that it has “gone to change”, and in the darkest abyss of the World’s End awaits us … well, you can see it below.

World of Chaos, compared to the entire sample of final bosses seen below, follows the canons of Square-Enix much more closely. The yellow eyes typical of dark creatures are present both on the face of the dark Ansem, both on the Guardian behind it and on … whatever the face of this colossal organic cluster is, but there is nothing conventionally “cute” about it. that is. On the contrary, Sora, Donald Duck and Goofy (upper right quadrant, to give an idea of ​​the proportions) will have to fight for their own lives and, in the various phases of the battle, the protagonist will have to literally tear the titan to pieces by recovering the companions one at a time. Simply iconic. 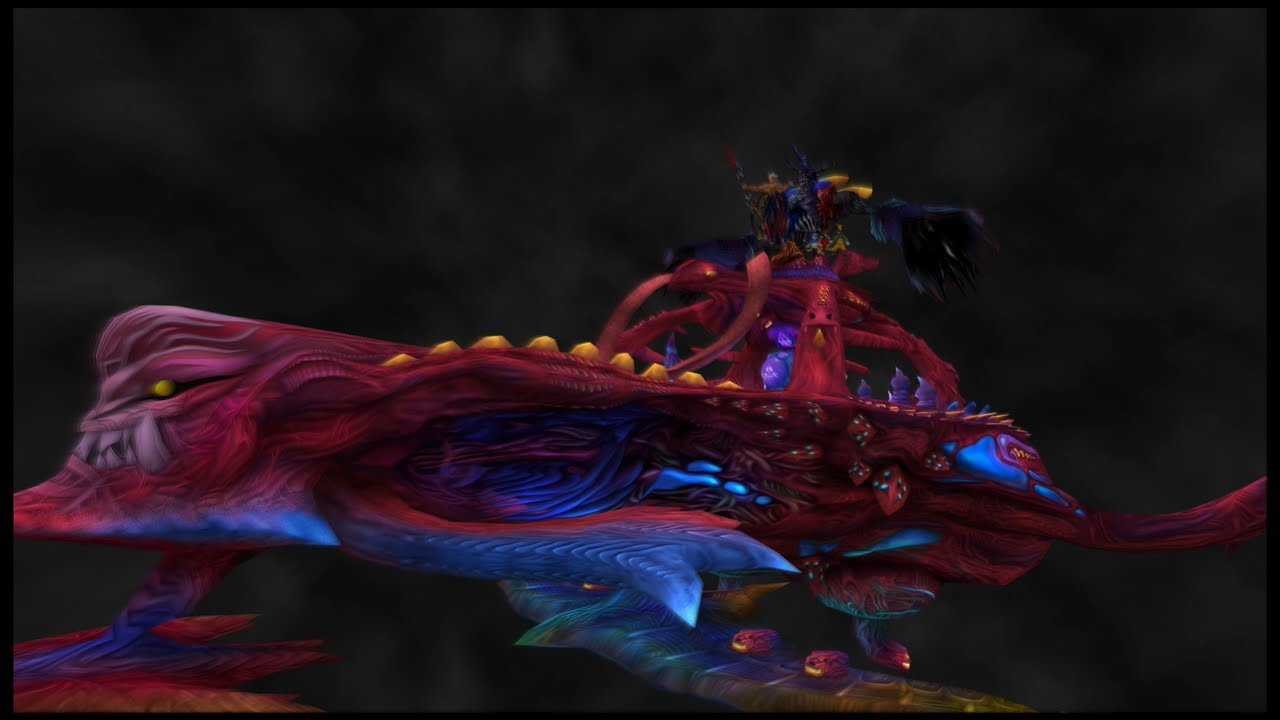 If the previous boss was Xehanort’s simple Heartless (who stole the name from the real Ansem; it’s… complicated, but you already know it), what will the original ever be able to do at its best? To give us an answer he provides Kingdom Hearts 3D: Dream Drop Distance, which by promoting an enemy from optional to final opponent has clearly weakened it. The Young Xehanort he is no longer that “unknown” who in Birth By Sleep made us suffer the pains of hell, but on the other hand he has been able to keep intact his dominion of time. And it is with this that the confrontation becomes interesting.

The battle is as duel as you might expect, despite Young Xehanort’s attacks being lightning fast. However, you are never faced with someone who play dirty until you hear him shout “Time, stop!” as soon as it takes the final blow. Use the command Change reality it will be essential to be able to hit the clock that separates us from victory, but it will only be at this point that the enemy will go out of his way to prevent us from reaching it. Failing to do so will lead us to relive the entire fight from the beginning. It is not the last fight before the credits, but before the battle the story of Sora must be concluded and it is not possible to save later. 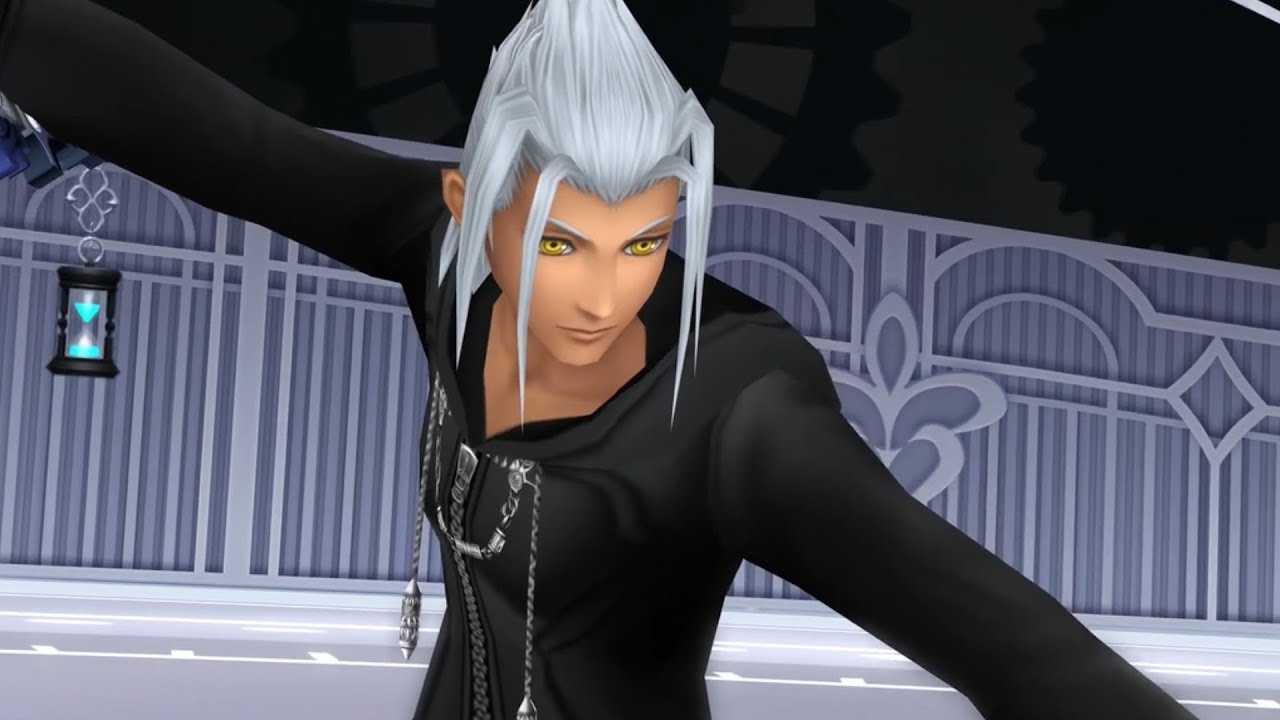 We could also title the section “The forced choice” and fans of the saga would have guessed who we were alluding to anyway. Yes, it was inevitable that he would appear in this ranking Kingdom Hearts 358/2 Days, but even if we never wanted to break down Xion in the end it is she herself who wants it. After having revisited, without any joy, the Disney worlds to place devices, in the many phases of the battle Xion uses them to replicate Sora’s abilities. As much as Roxas (and we with him) wanted to work things out another way, Xion’s fate is ultimately to fall apart. Literally: his memory fragments will return to Sora, in a coma after the events of Chain of Memories.

If we quickly summarized the heartbreaking confrontation with Xion, it is because unlike Young Xehanort here we intend to include, on an equal footing, what (with no bailouts in between, as the rule dictates) follows the fight. Tetsuya Nomura has also somehow managed to include a conceptual trailer for the second numbered chapter and integrate it into the gameplay. To make it even more impressive the duel with Riku it is the passage from the technical peaks of the trailer in computer graphics to the limits of the Nintendo DS hardware. But, you know, a Roxas with two Keyblades is well worth a “lower” platform. 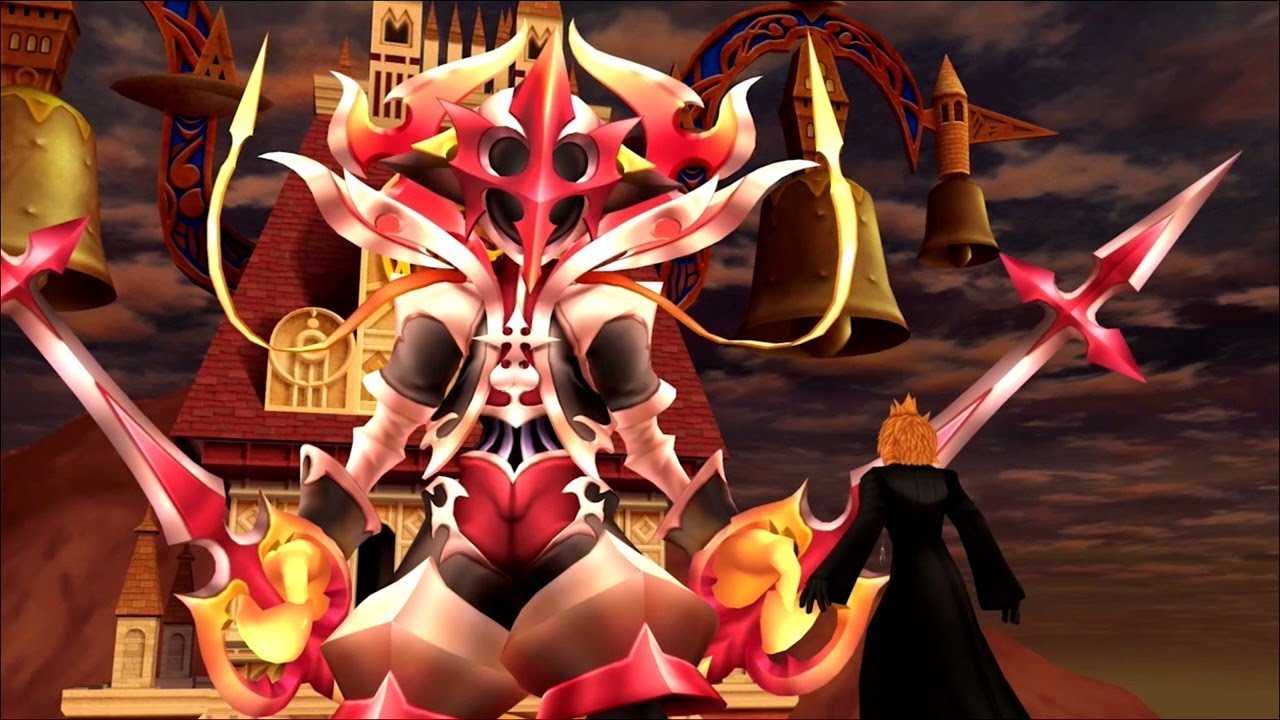 The most chaotic condominium meeting ever

We mentioned the “second numbered chapter”, and then we said to ourselves, “why not close our top 5 with the final boss of Kingdom Hearts II? ” That’s right, no Master Xehanort from the climax of the third episode: no, the top of the podium is all for Xemnas. As the Beatles made their guitar “cry gently” in the eponymous song, the battle against the head of the original Organization XIII was able to make our PS2 cry in their time. Perhaps for this reason, this time Donald and Goofy will not be with us, but in their place we always have the support of Riku.

Or maybe they left the scene in view of the apocalyptic proportions of the battle. And what a fight! Here a clean, delayed burst in pure anime style, applied to entire buildings, is just the tip of the iceberg. The skyscrapers will soon find themselves being sent back to the sender, quick time event dopo quick time event, while the World that Does Not Exist collapses in on itself. The last part of the fight sees us against Xemnas in the middle of total nowhere … and, for a brief moment when all seems lost, we take the reins of Riku to inflict the final blow. What more could you want, apart from reliving the battle on Nintendo Switch sooner? 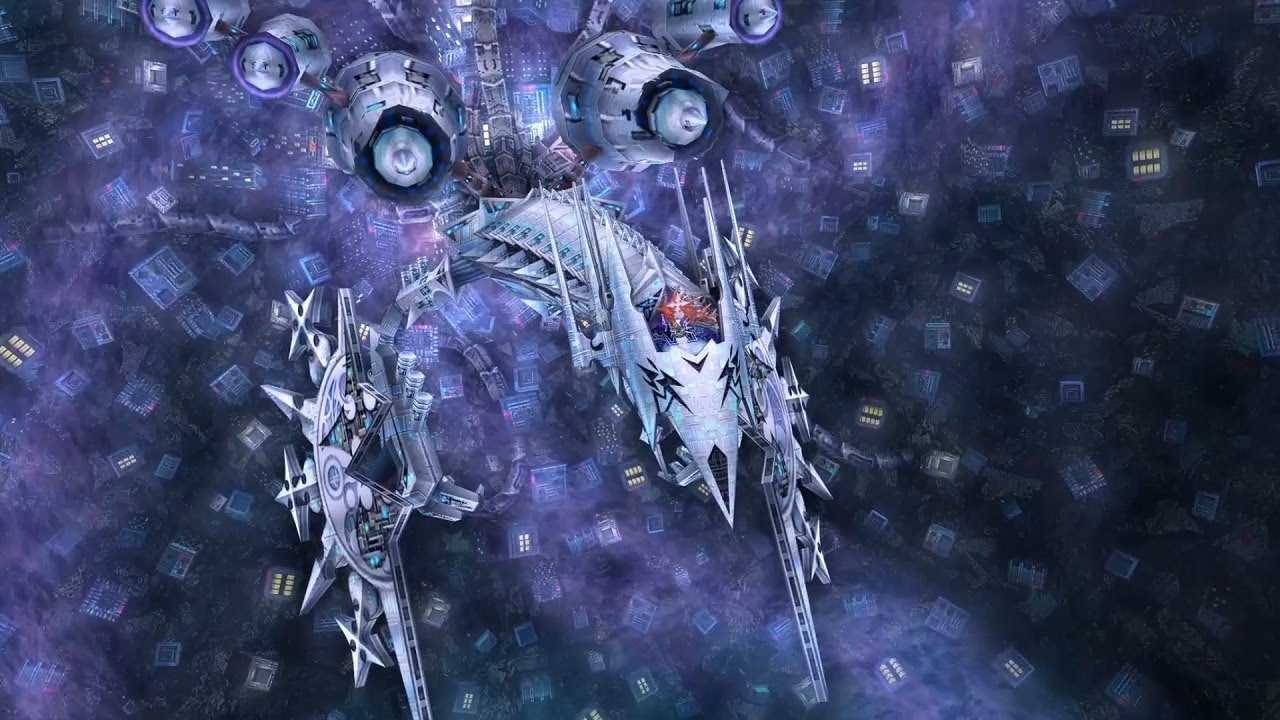 Incastrati: the series by and with Ficarra and Picone 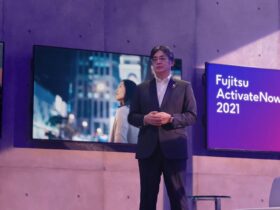 Fujitsu ActivateNow 2021: how digital technology can help our tomorrow 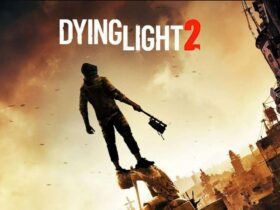