Kirby is finally back for a new and colorful adventure. Let’s find out how the spherical Nintendo hero fares in this review of Kirby and The Lost Land

When, surprisingly during the Direct last September, Nintendo and HAL Laboratory decided to present a new main title of the Kirby series to the world, a large slice of the community rejoiced. Yes, because this new title, the first entirely conceived in 3D (and those who are not new to the series know well how important this aspect is), immediately showed that it had all the credentials to take the saga to a new level. Will he have succeeded? Here is the review of Kirby and The Lost Land.

A rather chubby hero

Among the complex and varied ranks of characters in the Big N, Kirby is certainly a figure capable of getting noticed. The term figure is not used here by chance, as the simple but not trivial design of the sympathetic protagonist can be considered as one of the most characteristic features of him. Kirby is a rosy, round-shaped creature who lives in the land of Dream Land, the scene of the events of many of the previous chapters, and, if you are interested in the lore of the series, you can find a complete in-depth study in our dedicated special.

One of the novelties of this chapter, however, is the change of location. The plot, told through pleasant cutscenes, sees our hero and all the inhabitants of Dream Land sucked into a mysterious vortex, which teleports them to an unknown land, rather resembling a post apocalyptic version (obviously in cartoon style) of ours. real world. Here Kirby will discover that the bizarre army of beasts has kidnapped the Waddle Dee, and will decide to embark on a journey to free them, in the company of Elfilin, a funny little blue creature similar to a Chinchilla. 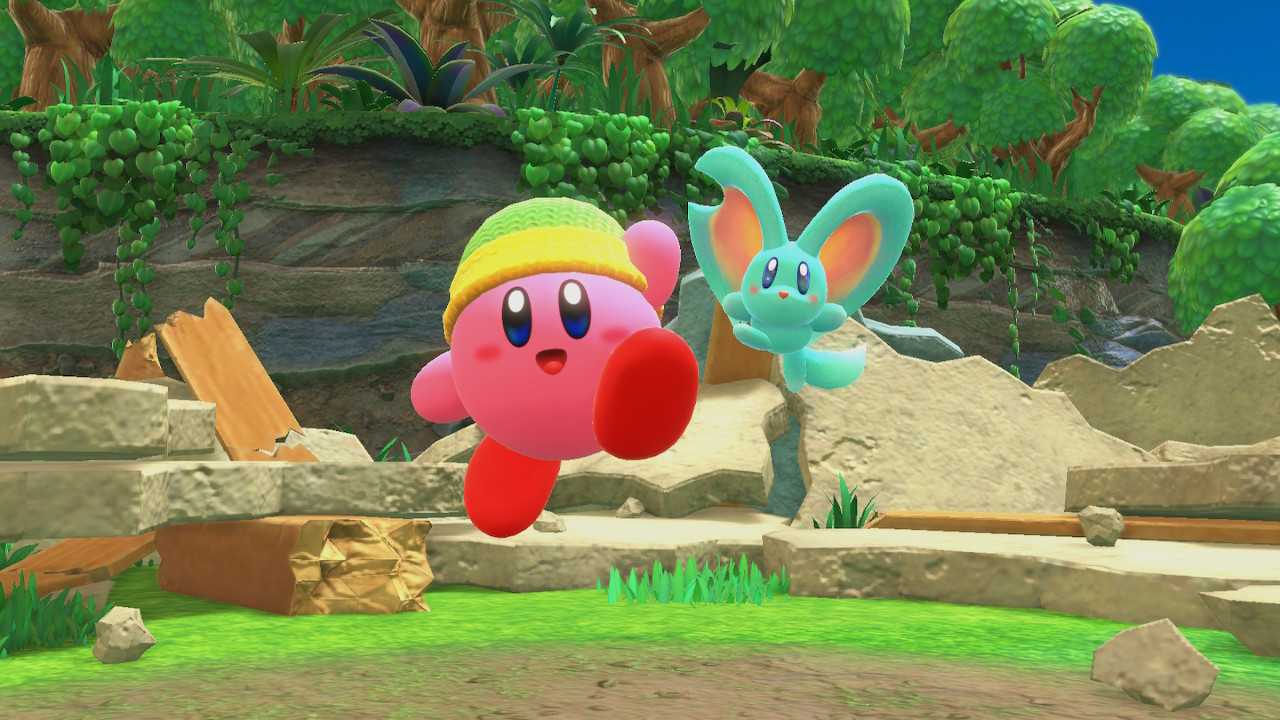 Being basically a platformer with action / adventure elements, the player will be called upon to overcome various levels linked together by a world map, but the peculiar abilities of our chubby hero allow you to approach obstacles in a rather different way from the classic exponents of the genre . In fact, Kirby has the ability to inflate like a balloon to fly in the air, and to suck in one’s enemies to copy their powers. These abilities will also return in a big way in Kirby and The Lost Land, but, as we will see better in this paragraph of our review, they will also be accompanied by a whole new ability: the Boccorphosis.

The latter can basically be seen as an evolution to the nth degree of our ability to copy enemies, but aimed mainly at the most unlikely objects of the surrounding landscape. From the beginning to the end of the adventure, the rounded hero Nintendo will prove his body elasticity by swallowing cars, drink dispensers, road cones three times the size of himself, and so on and so forth.

Without going into details so as not to spoil the surprise, we have found some truly brilliant and fun transformations, compared to others a little less memorable. However, it is a well implemented mechanic and able to elicit a laugh on several occasions, but which remains mostly relegated to some moments or well-defined sequences. In short, as fun as it is, do not expect the level reached by the transformations in Super Mario Odyssey, but be ready to really see all the colors. 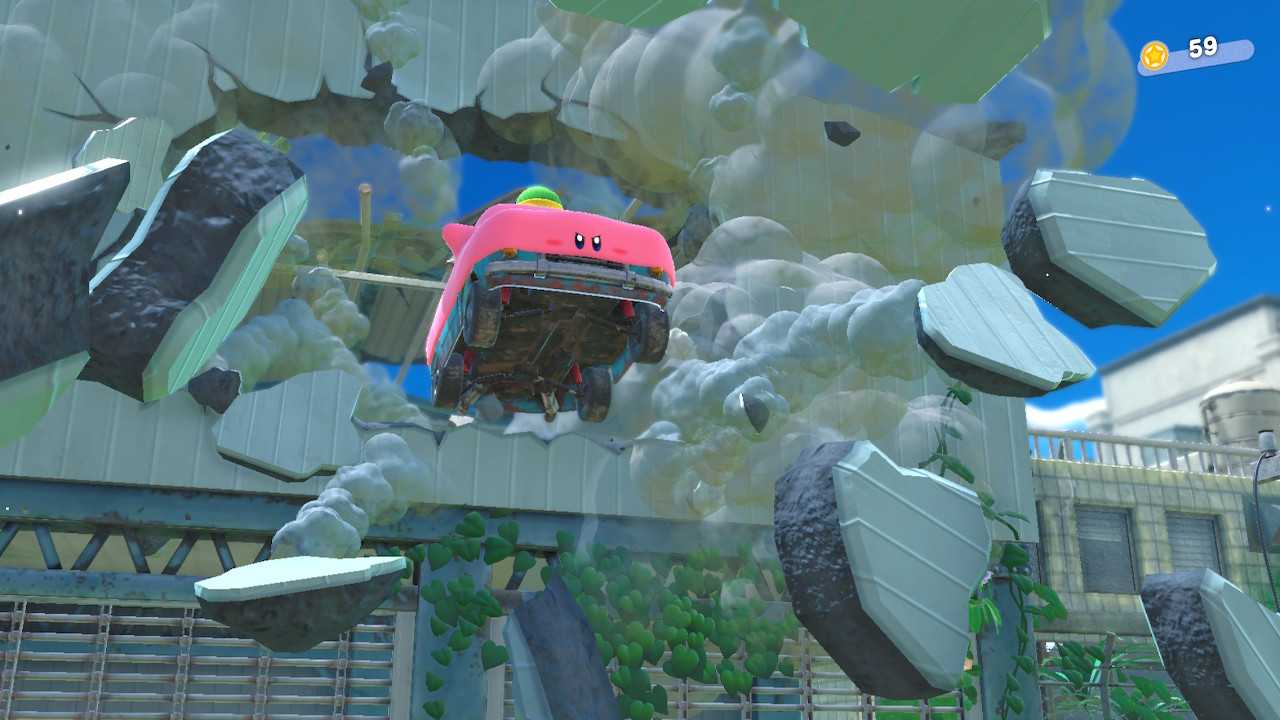 Lots of Objects to Find – Kirby and The Lost Land review

Although at the first announcement, someone had considered a similar approach to Super Mario Odyssey regarding the structure of the game world, in this review we can confirm that Kirby and The Lost Land takes a rather different path. Wanting to make a comparison at all costs with a chapter in the series dedicated to the mustachioed Nintendo plumber, we could say that Kirby’s latest adventure is more comparable to a Super Mario 3D World. In fact, we have levels, divided into worlds (as per tradition, each with a predominant theme), and made up of areas that will be traveled to reach a single end, although along the path there are various secondary roads, secret rooms and hidden shortcuts. .

Where the title shines is in fact precisely in the fresh and well-thought-out level design, with always different and never predictable choices. Each level will be explored from top to bottom carefully (there will be no time limit within which to reach the end) to find all the hidden secrets, free the imprisoned Waddle Dee, collecting coins and stickers (statuettes depicting characters, enemies and objects game). Every now and then we will have to clash with mini bosses in the middle of some levels, and at the end of each world there will be the real boss, to be challenged in battles for the most part really pleasant and successful.

For those who wish it is also possible to face the entire adventure in the company of a friend. The local co-op mode will be available shortly after the first bars of the game, and by activating it a second player will take control of a Waddle Dee Helper. The latter will obviously not be able to absorb enemy abilities like Kirby, but will be able to float in the air for the same amount of time and will also be armed with a spear with which to perform various offensive moves to help Kirby during the main levels and the fights against the boss. A gimmick that we really appreciated and that allows you to pleasantly share almost the entire gaming experience. 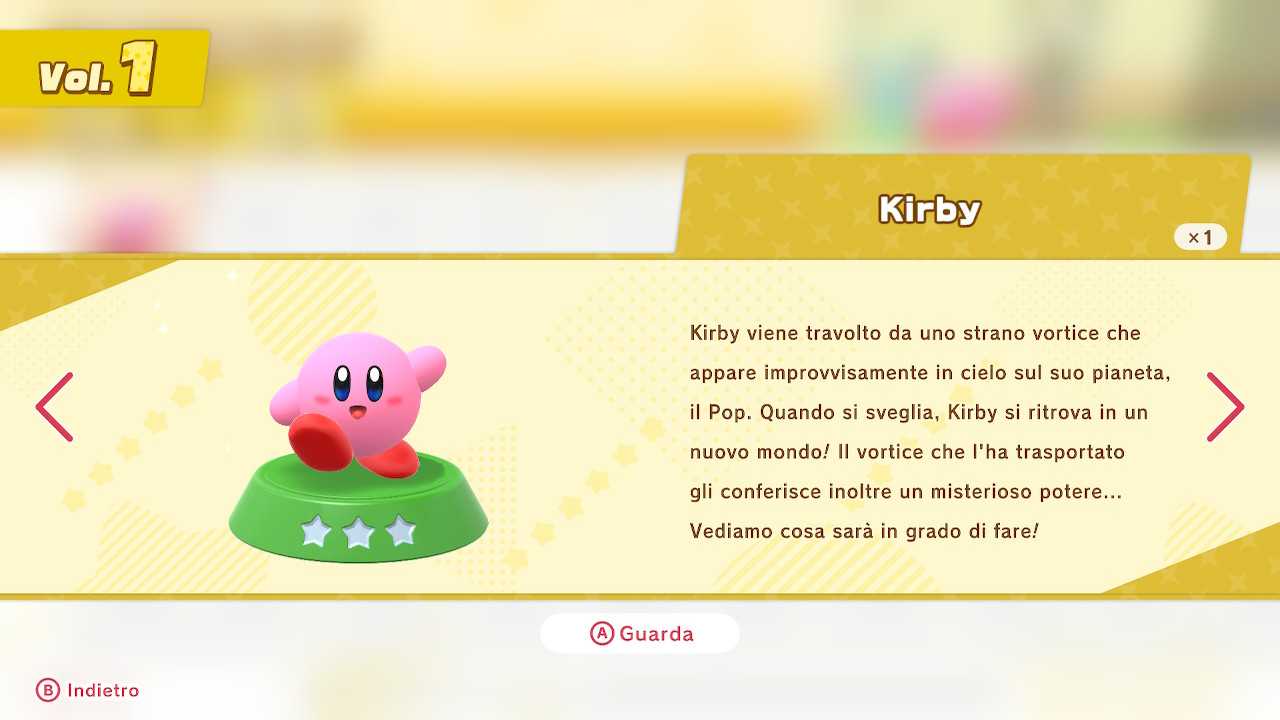 City of the Waddle Dee – Kirby and the Lost Land Review

The Waddle Dee that we will free during our adventures will repopulate the City of Waddle Dee. Between one level and another we will be able to return at will in this city, which will essentially act as a hub, in which we will be able to carry out a whole series of activities. As the number of Waddle Dee freed increases, the village will expand with new buildings, allowing you to access mini-games, shops where you can buy cures and miscellaneous items, an area where you can review gameplay footage, and more.

Special mention should be made for the armory, where all the skills you have discovered are available. During your adventure you may come across projects that will allow you to upgrade (even more than once) the skills. To do this, however, you will also need to pay a price in coins and deliver Rare Stones. The latter can be obtained mainly by completing the numerous Treasure Routes, or secondary challenges on the map in addition to the standard levels. These will be tackled only in single, and will require you to complete within a time limit a shorter and full of obstacles level, using a given skill among the different discoveries.

If taken individually, the number of abilities obtainable by enemies turns out to be on the whole sufficiently varied. Of course, the most demanding may want an even wider choice, but if we also take into account the different Boccomorphoses present, the figure appears decidedly appropriate. The enhancement of skills then allows in some cases to also substantially change the powers that our hero will be able to acquire, thus adding even more variety to the gameplay, also because these enhancements always remain reversible at all times. 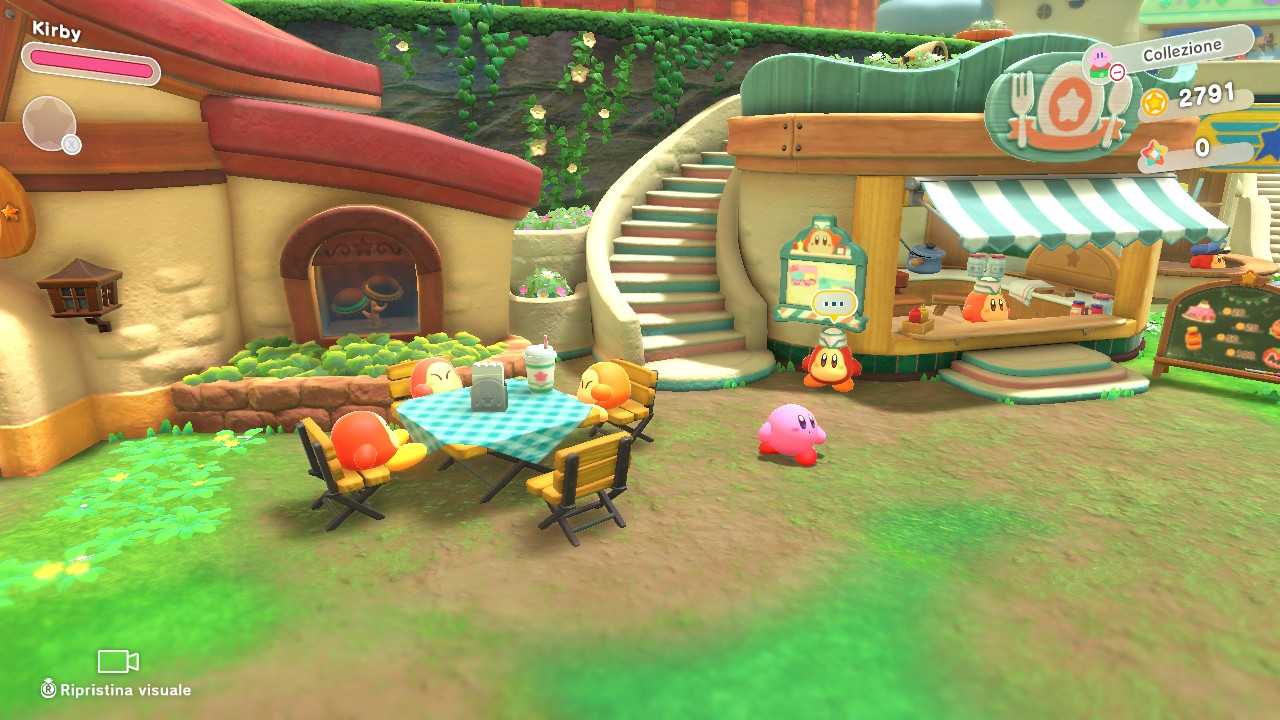 The Missing Dimension – Kirby and The Lost Land review

The feeling pad in the hand is the same as in the previous episodes and all the classic gameplay mechanics have not in the least affected by the transition to three dimensions, but have actually benefited sincerely from it. Newbies approaching the series for the first time will be able to count on a fluid, intuitive and well calculated gameplay, while the historical fans of the saga will immediately feel at home from the very first moments of the game. In addition, several well-known faces among the enemy ranks will also make a welcome return, to which new funny and bizarre beings are added, determined to put a spoke in the wheels. 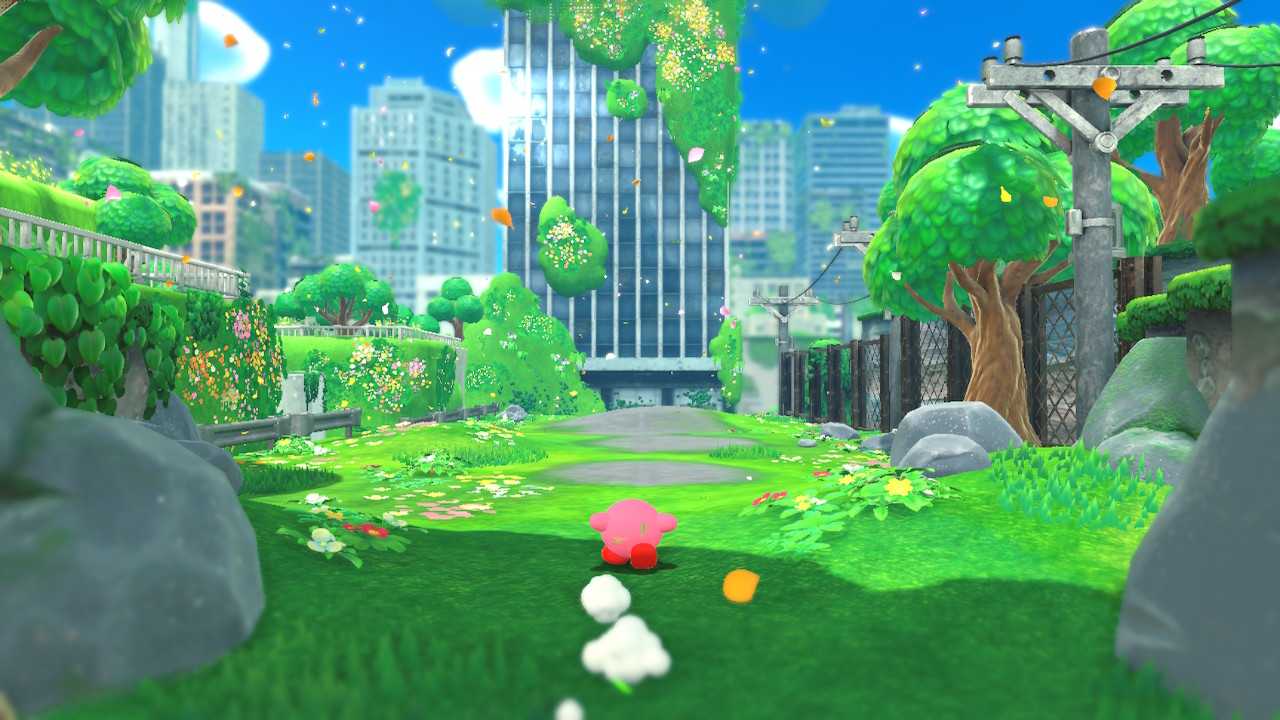 An Adventure Open to All – Kirby and The Lost Land Review

Since its origins, the Kirby series has always had an eye towards an audience less accustomed to platform games, and even this chapter is no exception. At the beginning of the game we will be able to choose between two difficulty levels, called Breeze Mode (the simplest) and Storm Mode. Although well balanced, the degree of challenge of the experience, even choosing the second of the two difficulties, is always very permissive, especially when compared with the average of the genre, rising a little (but not too much) only in the case of some secondary challenges. While this choice was made precisely to ensure more accessibility to the title, on the other hand there could be a real risk that some more experienced players find the experience boring. 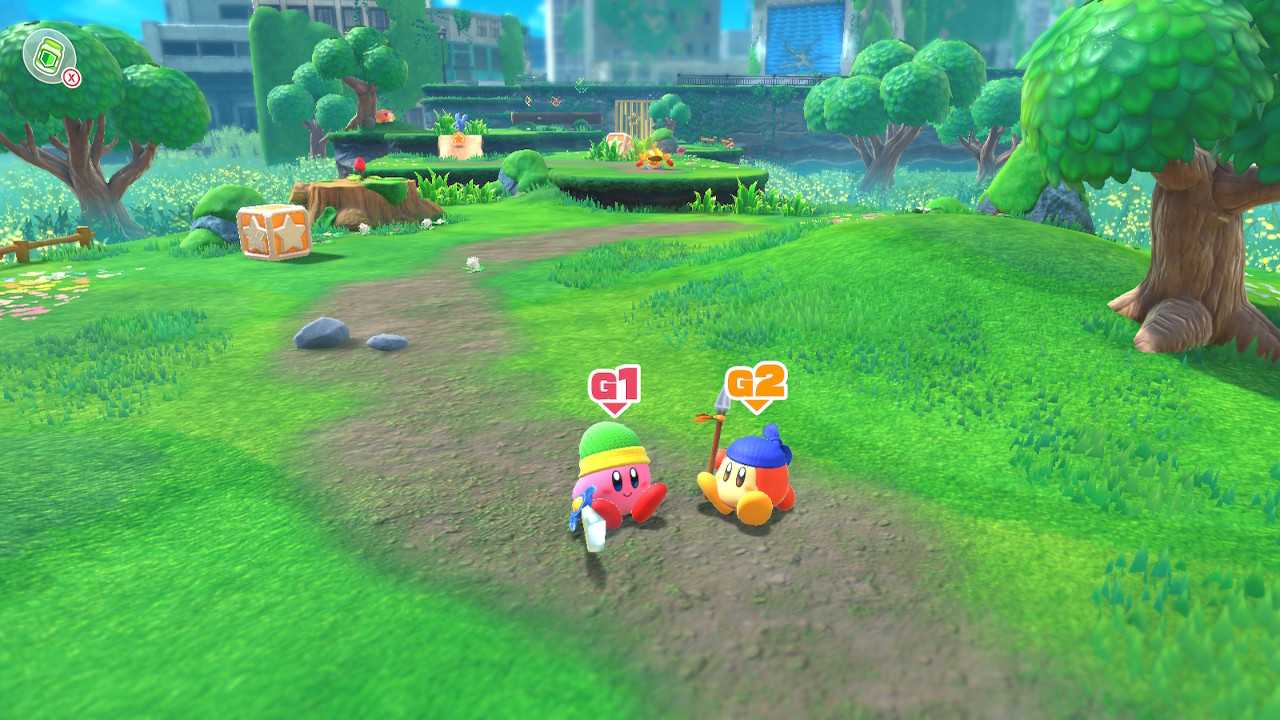 An Idyllic World – Kirby and The Lost Land Review

In our review of Kirby and The Lost Land we cannot fail to talk about the technical sector. Artistically, the title is a joy for the eyes, thanks to lively and colorful scenarios. 60 frames per second are not reached, but the frame rate remains firmly anchored to 30 fps, also thanks to some small sacrifices in the animations (which are a bit jerky on more distant objects and enemies), but which do not undermine the final visual rendering . For the rest, the typical mastery of Nintendo productions is absolutely present here, and explodes with force from every pixel on the screen from the very early stages of the game.

The gameplay is clean and almost bug-free, the attention to detail is obsessive in every area, resulting in a game world full of small details that only an attentive eye (or ear) will be able to find. Noticing these thousand shades gives a unique sensation and allows you to appreciate the title from other perspectives. Try to listen carefully to the chirping of the birds during the very early stages of the game and you will understand what we are talking about.

The audio sector, which has always been held in high regard in Nintendo-branded productions, also deserves sincere applause. The sound effects are exquisite and really well done, while the music ranges between always different genres, sometimes citing classic songs from the series, but mostly leaving room for new themes (the main one is proposed in really all sauces) that almost surely you will find yourself whistling for a long time. 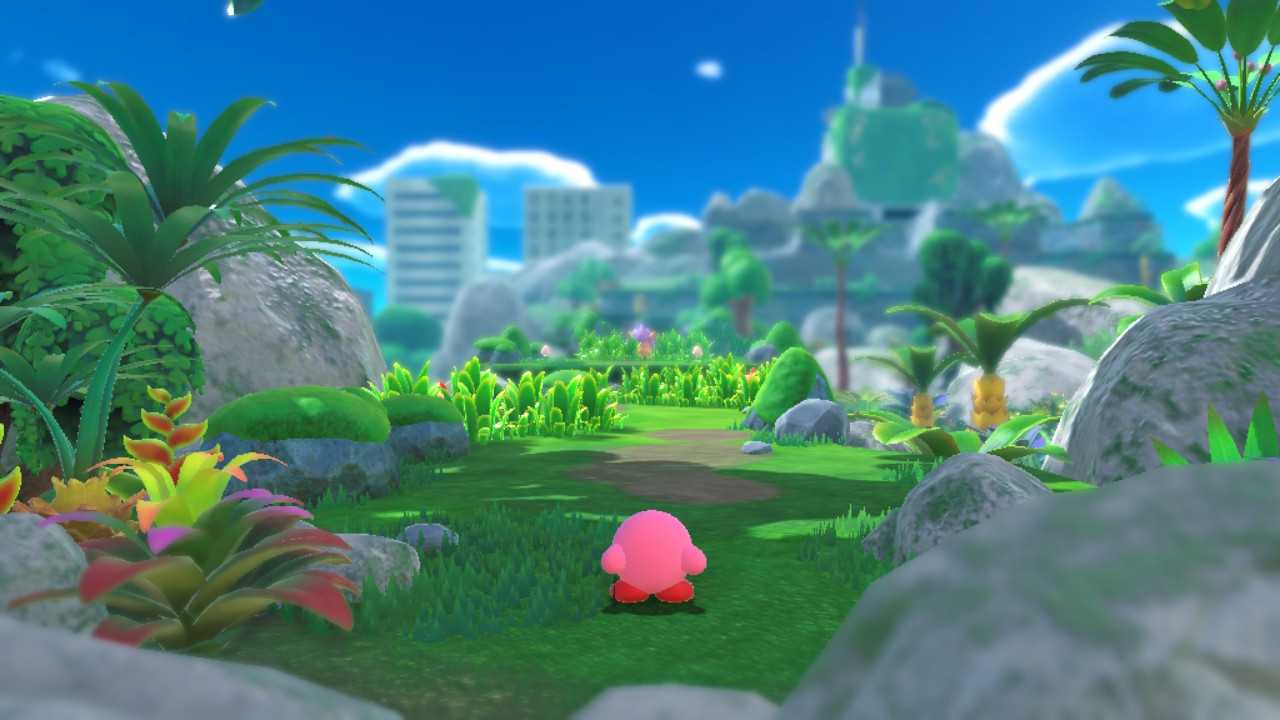 Kirby and The Lost Land is a great return. A title full of things to do, which does not distort the mechanics …