The only Lamborghini not named after a Spanish bullfighting bull, one of the most loved cars of recent decades. The legendary Lamborghini Countach this year has blown out 50 candles since its debut as a Concept Car at the 1971 Geneva Motor Show, and to pay homage to it, the Sant’Agata Bolognese company seems to have a incredible and unexpected return. From the official Instagram page, you can see a hidden silhouette and one unequivocal sentence: Lamborghini Countach is returning. So let’s find out everything we know so far about the return to the market of one of the most iconic Lamborghinis ever.

What is Lamborghini Countach? Heir to the Miura, protagonist of the rooms of thousands of fans

To understand why this is important news, it is necessary to know what Lamborghini Countach is and what it represents for the Lamborghini world and for the car world in general. We talked about Lamborghini in a recent episode of Auto for Dummies, which I leave you in the links at the bottom of the page. For those who missed it, however, the Lamborghini cars born in 1963 from the passion for cars of Ferruccio Lamborghini, founder and owner of Lamborghini Tractors. Ferruccio’s dream was to create sports and fast cars that bore his name, and in a few years his dream soon became a reality.

Lamborghini’s first cars, the 350 GT and GTV, were cars with very traditional aesthetics and mechanics, which did little foreshadow the unconventional future of the company established in Sant’Agata Bolognese. The turning point came with the Miura from 1966, the first Supercar in history. Equipped with a rear V12 engine, incredible aesthetics and crazy theatricality, the Miura began to show Lamborghini’s potential. So, after about 5 years of production of the Miura, the Bolognese company decided to take a step forward, launching a car with the most modern aesthetics, and with innovative technical and aesthetic solutions. 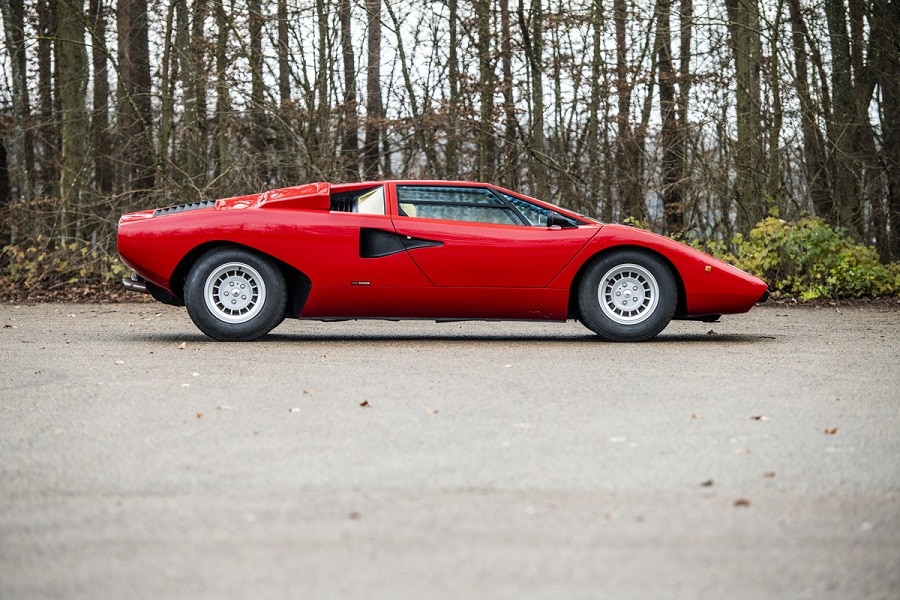 In 1971, at the Geneva Motor Show, a new concept car was born, the Countach. Equipped with a linea a cuneo to say the least extreme, full of edges, low, tapered and with unprecedented scissor doors, Countach soon became the most desired and coveted Supercar by young people all over the world. Its unique and inimitable aesthetic was the result of the work of the Turin designer Marcello Gandini, of the Bertone stable, which with her inaugurated and made famous the wedge line that will then impose itself in the following years. 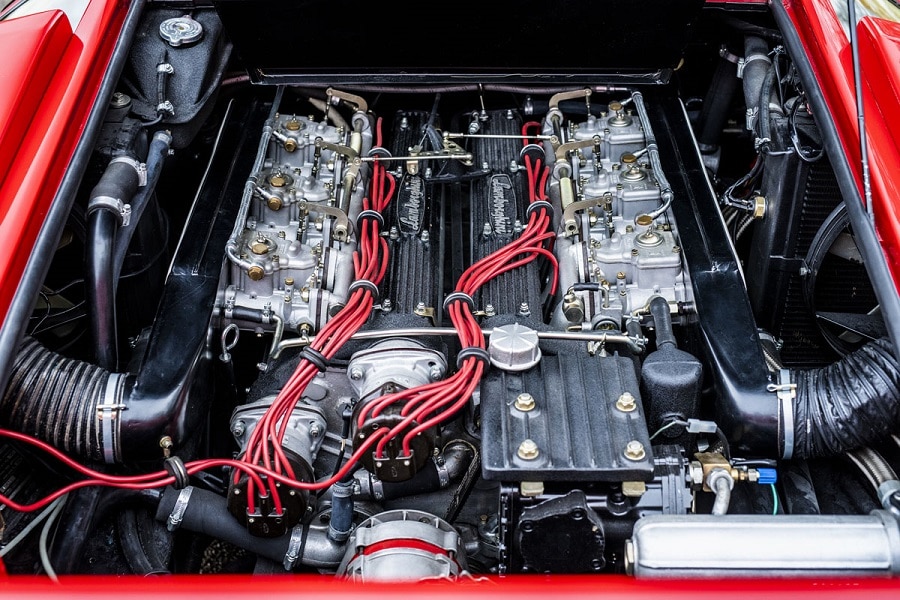 If, however, Countach was memorable from an aesthetic point of view, also from the point of view mechanical the Bolognese Supercar was not joking at all. After two years of refinement, in fact, in 1973 the production version of the Countach debuted, the LP400. The name already indicates the largest Announcements: the position of the engine, center-rear and placed in the longitudinal direction. Hence the acronym LP, Longitudinal Posterior, carried with pride by all the supercars of the bull after her. The idea behind this solution was that of concentrate all the mass as much as possible in the center of the car, to ensure optimal weight distribution. The engine then was the V12 naturally aspirated designed by Giotto Bizzarrini from 4 liters already mounted on Miura, capable of approx 375-380 CV. Performance is still incredible today, with a top speed of over 300 km / h. 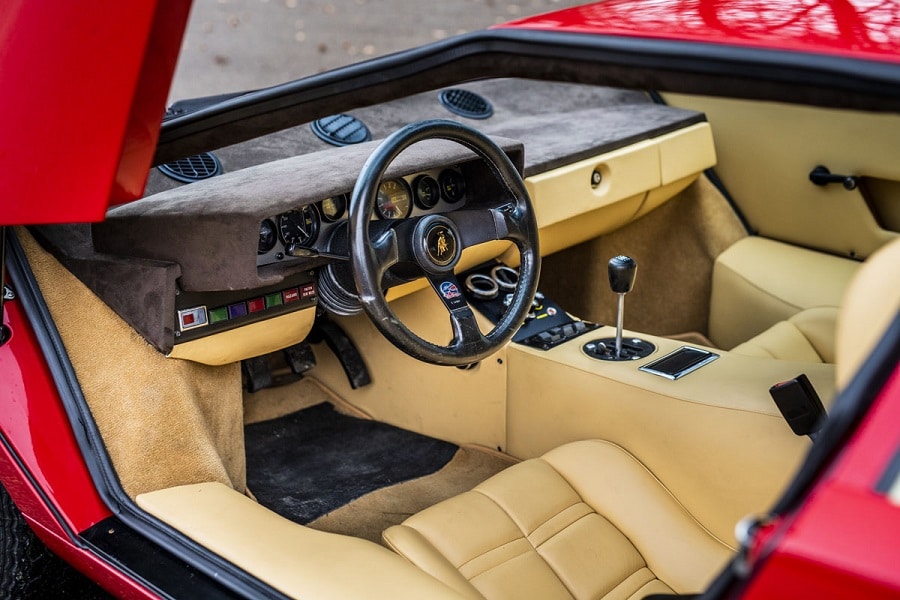 Countach is not only the most extreme and revolutionary Lamborghini in the history of the Emilian brand, but it is also the longest-lived: born in 1971, it was abandoned only in 1990, almost 20 years after the first presentation. In the meantime, many versions have followed, from the LP400S, the LP5000, to indicate the new 5.0-liter engine, the 5000 Quattrovalvole equipped with enormous ailerons and extreme aerodynamic appendages and the last 25th Anniversary, which celebrates 25 years of activity of Lamborghini. After 2,049 units and 19 years of life, the Countach gave way to the much more modern Diablo 31 years ago. But now, it’s ready to go back.

The origin of the name Countach: not a bull, but a piece of Piedmontese famous all over the world

Before going into the news, however, a little is a must excursus on the name carried by this legendary Lamborghini, Countach. Traditionally, in fact, all production Lamborghinis (excluding prototypes and particular versions that followed one another over the years) they proudly carried a name linked to the world of bulls. Among the names of legendary bulls protagonists of bullfighting such as Diablo, Huracàn or Murciélago, names of breeders such as Miura or of breeds such as Gallardo, the link with the Bull, Ferruccio Lamborghini’s zodiac sign, has always been central in the cars of Sant’Agata. There is only one exception in this more than fifty-year tradition: you, Countach. 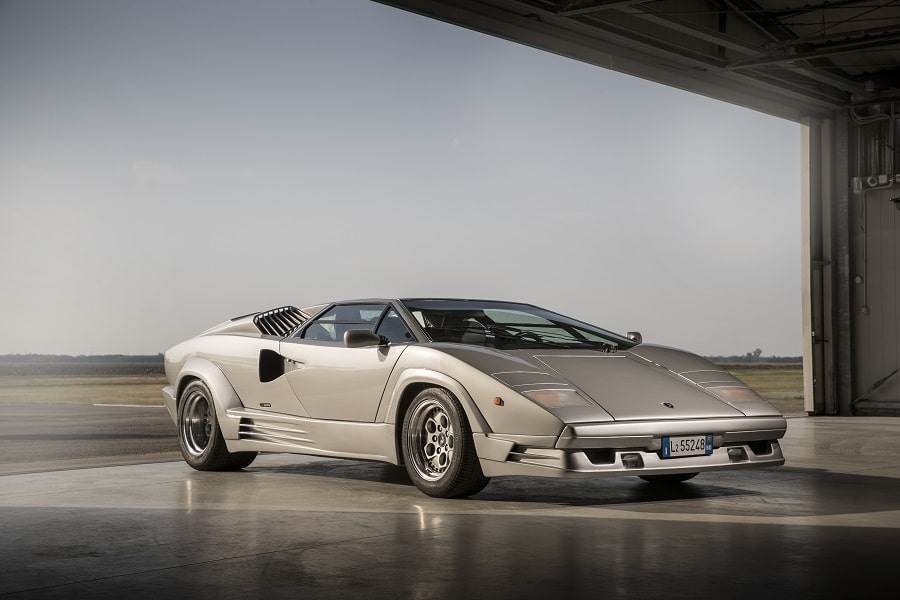 For this name, in fact, the links with the bull world are totally non-existent. Indeed, surprisingly the origin of the name Countach is neither Anglo-Saxon (as has been thought for many years) neither Emilian, but Piedmontese. As mentioned, in fact, the lines of this legendary car are the result of a fellow citizen of the writer, Marcello Gandini from Turin. The brilliant designer at the time worked at Bertone, another very Piedmontese company based in Grugliasco, on the outskirts of Turin. Most of the company’s workers, including another famous Turin, Giorgetto Giugiaro, they were Piedmontese, including many collaborators. 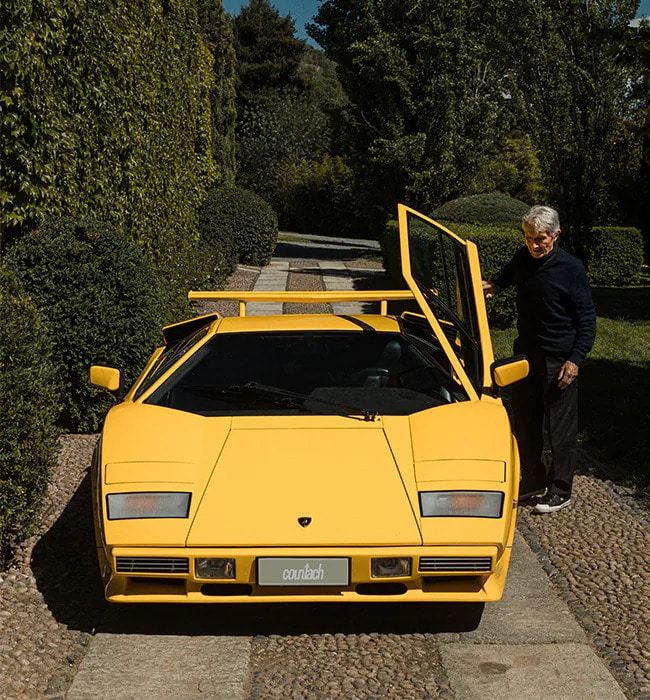 Gandini himself recently silenced all the stories and legends that had been created around the name Countach, telling Lamborghini the true story of a particular name. The focus of the story is a profilist, who made the locks at Bertone. From Gandini’s story, it was the classic barotto, peasant in Piedmontese. “He was two meters tall, with huge hands and he only spoke Piedmontese, he hardly ever used Italian. ”, says Gandini. Piedmontese is also a very particular dialect, with a sound and a phonetics that makes it more similar to French than in Italian. This particular character used to use dialectal and very colorful expressions during the day. The most used and loved, however, was Contacc !, which is pronounced just countàch. This word, which literally means contagion, has however become over time an expression of wonder and amazement, like perbacco! or damn it!. 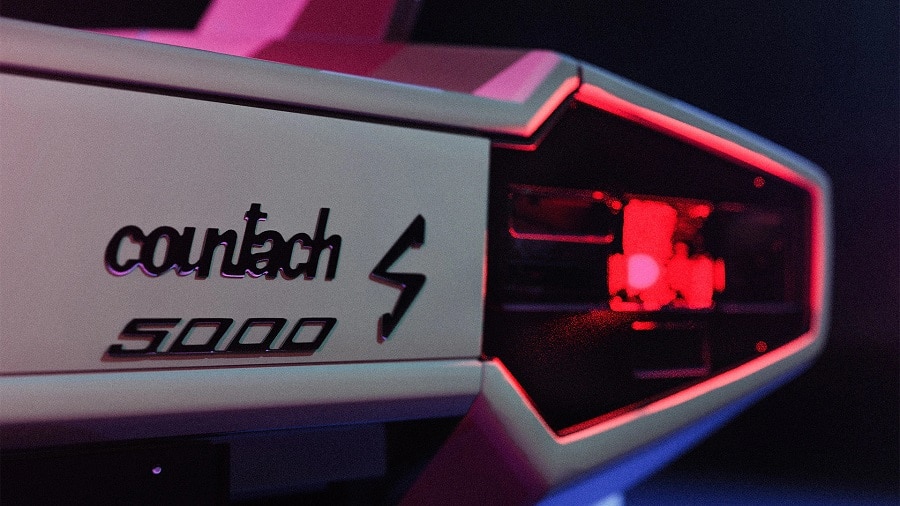 Gandini says that, during the long nights of work towards the Auto Shows, he often joked a little to have some fun in Bertone. “To keep up with spirits, there was a frondic spirit. So I said: “We could call it Countach!”, To joke, to say an exaggerated joke, without any conviction. But next to me was Bob Wallace – legendary New Zealand mechanic and Lamborghini test driver, ed -. So, I jokingly asked him how it sounded to an English-speaking ear. He said it in his own way, in a strange way. It worked. We immediately made the writing and we stuck it. “. The name also appealed to the Lamborghini management, and so it reached the eyes and ears of the world there Lamborghini Countach, the Bolognese car with a Piedmontese name.

The great and unexpected return: Lamborghini Countach under a cloth and in an emotional video. How will it be?

After this little lesson in the history of motoring, therefore, we understand what the name Countach really means for Lamborghini. After the legendary Miura, the Countach was the car that marked the turning point for the House. From a small second-floor factory, Lamborghini with its Countach became an object of desire, made itself known all over the world and this model became one of the most desired throughout the 70s and 80s.

A real milestone in the history of Lamborghini, which today more than ever becomes the heritage of the Sant’Agata company. As said several times by the management of Toro, and first and foremost by the President Stephan Winkelmann, “Our future is our history”. A sentence that in recent months had passed a bit on the sly, but that late yesterday on Lamborghini’s social profiles it finally took shape.

On Twitter we find a very adrenaline-pumping video, which refers to the myth of Lamborghini Countach among the young people of the 70s and 80s, who competed to spruce up their rooms with a poster of the legendary car of the Bull. its Instagram, on the other hand, Lamborghini hid more, “showing off ”under a cloth an unmistakable wedge-shaped silhouette, with an unequivocal caption: The new Lamborghini Countach is coming. 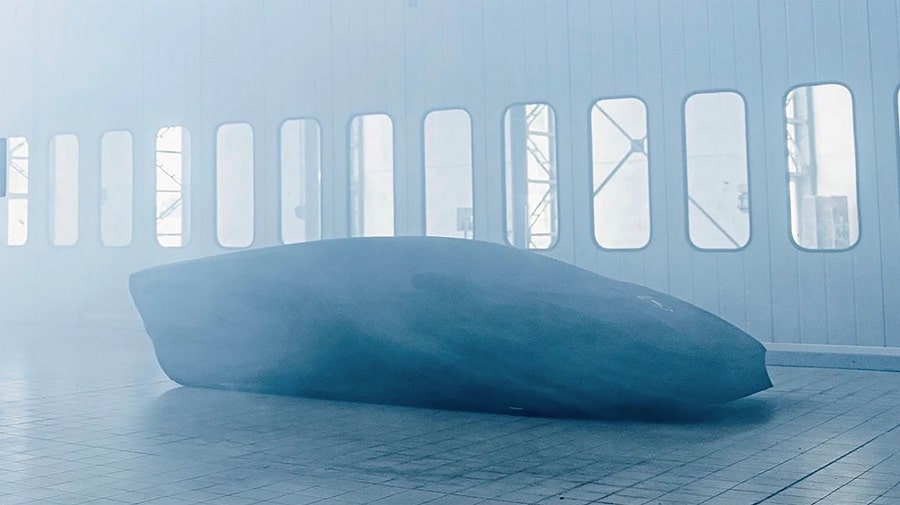 The House of Sant’Agata has not been unbalanced at all, neither on the aesthetics, nor on the positioning nor on the mechanics of this new Countach reborn 50 years after its first life. The rumors speak of the replacement for Aventador, which just this year celebrates 10 years of career. In reality, however, it was Lamborghini itself that let slip a little more about its mechanics.

Check a name on the Unica App: LPI 800-4. What this acronym means: hybrid, integral and very powerful

More precisely, the preview comes from the Lamborghini Unica app. For those who do not know, in fact, Unique is the Companion App dedicated exclusively to Lamborghini customers, which can only be accessed by invitation and which, in these hours, has given del Toro customers a very juicy preview. 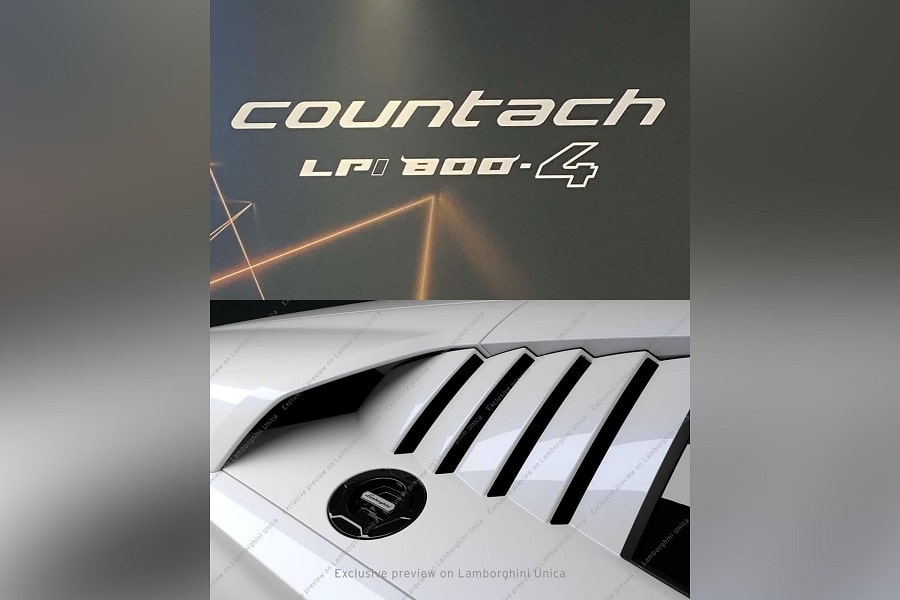 By browsing the app it is in fact possible to discover one very small anticipation of what will be the future Countach. You see one white bodywork showing the four scratches on the rear pillar, one of the countach’s many distinctive signs. You also see a petrol cap, which makes us understand that there will still be a thermal engine under the hood, but above all we read the official name: Lamborghini Countach LPI 800-4.

As we told you before with the original Countach, you can understand many things about a Lambo from the initials. Let’s start from the beginning: LPI. LP is an acronym we already know: it means Longitudinal Posterior, and indicates the position of the engine, precisely in the central-rear position and in the longitudinal direction. The surprise, however, is in the unpublished I at the bottom. Its meaning can only be one: Hybrid. So will Countach be the first hybrid Lamborghini? What kind of system will it be? We will probably be faced with a sistema ibrido plug-in like that of Ferrari SF90 Stradale, or to remain in the Volkswagen Group (of which Lamborghini has been part of since 1998) of Porsche 918 Spyder. 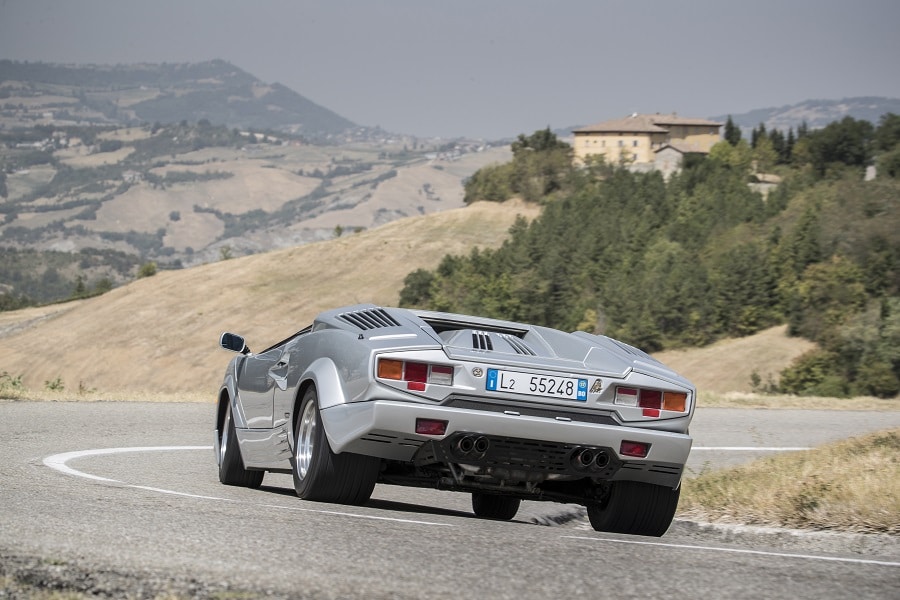 Then we come to the numerical part, 800-4. Unlike the original Countach, where 400 indicated the displacement, today the three digits indicate horsepower. 800 then …