There was a time when the wireless earphones they were used to listen to some podcasts, an undemanding playlist for those who were willing to give up something in terms of quality. But LG Tone Free T90Q during the tests of our review they proved to knowing how to do much more. Not only from the point of view of audio quality but also for the many smart features. Ranging from earphone hygiene to the possibility of make old TVs wireless too or the treadmills in the gym. Here’s what we think of these (much more than just) headphones.

Opening the box of the LG Tone Free T90Q earphones, we are faced with a small white ‘macaron’: LG has chosen a perfectly round case and very contained. We really appreciate it, because not only are they small enough to fit in any pocket but they fit comfortably, unlike many rivals. The case has a diameter of 54.5mm and a height of 29.6mm, weighs only 38.6 grams.

On the case you will also find due LEDone to show the state of charge and one the activation of the technology UV nano to sanitize the headphones (we’ll talk about it later). The USB-C input is on the back, while on the left you will find a switch that will serve for connect analog devices (we’ll talk about this too, don’t worry).

The earbuds themselves are pretty simple in shape, reminiscent of AirPods with a thin stem that goes towards the face when you wear them. They weigh only 5 grams one but they have an excellent grip in the ears: even during training they do not move (although, as always, we suggest special headphones for running).

The simple style, however, should not make you doubt the build quality, which in the time we spent trying the LG Tone Free T90Q for this review surprised us positively. They have one IPX4 resistance to sweat and splashes of water, but they seem resilient to us in general. We also really liked the silicone ‘grommet’ (you can find three in the box, along with a USB-C and an AUX cable), which adheres perfectly to the headphones and ensures firmness.

In short, they are very well built and well made. Often they will go unnoticed, but not all tech accessories have to be “fashion statements”: the style of these earphones is subdued, but undeniable.

Let’s move on to the analysis of the audio quality, which we must admit did not thrill us at the first listen. We plugged the headphones into the smartphone, checked that it used the best possible codecs for playback via Bluetooth 5.2 (he chooses them automatically) and we listened to some tracks from Kendrick Lamar’s latest album. THE powerful bass to enjoy hip-hop were all there (thanks also to the dynamic drivers in 11mm graphene), but something was missing in the high tones.

Even tracks with large dynamic range such as Free by Florence + The Machine were a bit too low-pitched. We downloaded the LG Tone Free app (really feature-rich, which we’ll talk about later) and found that the basic equalizer is su “Bass Boost”. That doesn’t sound bad at all, but for our taste it looks like it a little too “processed”risking losing details in the most complex tracks. 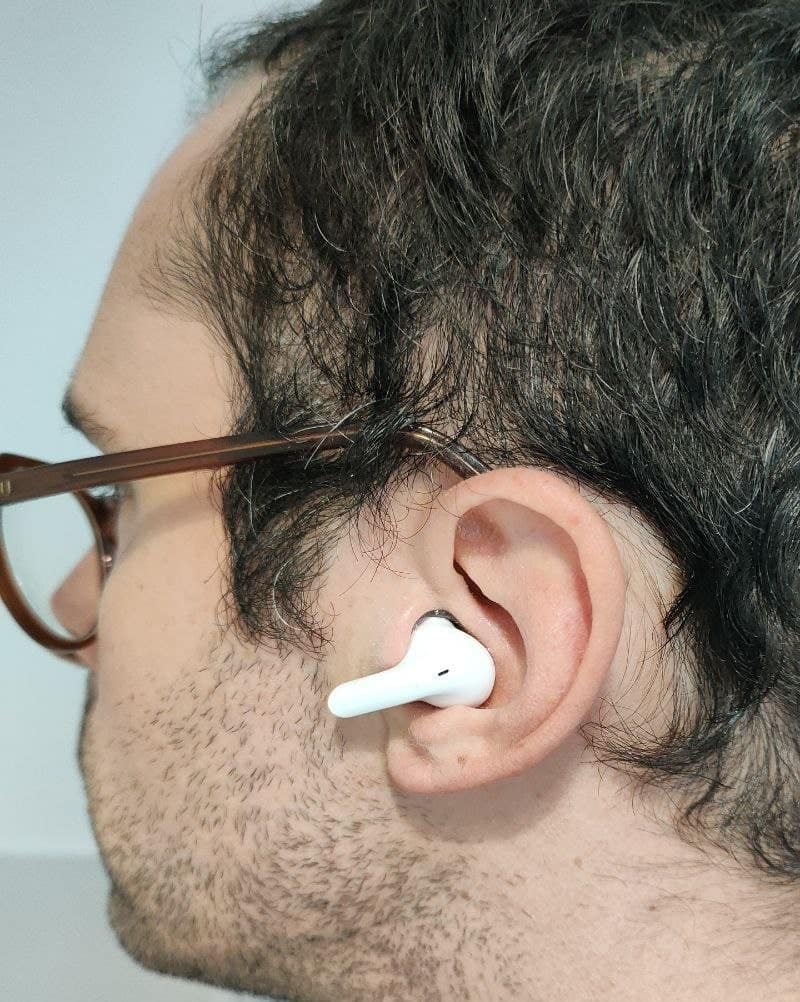 LG worked with Meridian on those presets: in addition to Bass Boost found Treble Boost, Natural, Immersive e 3D Sound Stage. Unfortunately, the Natural preset was also a little too altered for our taste. We also tried to adjust the EQ manually, but we were not entirely satisfied. Don’t get us wrong: removed a small slice of audiophiles who want a “pure” reproduction of the tracks, for most users the LG and Meridian’s audio choices will be compelling. But we would have preferred something different. Mainly because they support SBC, AAC, aptX Adaptive for high-resolution audio.

However, we were impressed by the quality of thespatial audio of these little earphones. Immersive and 3D Sound Stage allow you to structure the headphones to the maximum for those who love spatial audio: we watched a couple of episodes of a TV series that we have to review and we are really there feel center stage.

There is also the possibility to activate theHead Tracking di Dolby Atmos, which allows you to hear the sound as if it came from the sound source on the screen of a movie on TV or a video on your smartphone. It is truly impressive and enhances the viewing experience.

The ANC noise cancellationalso aided by the excellent adhesion of the rubber pads on the earphones, has us really convinced. It is on a par with the best competition (even the one with the Apple on the package) and remains under only some dedicated solutions, which however do not have half the functions. In this category, hard to find better.

The transparency mode it’s not quite as record-breaking, but it does its job when you need to follow a conversation or if you’re at a crossroads. Although, when you have to be careful, it is better to remove an earphone and thus block the playback, and then resume it simply by inserting the earphone into your ear. A feature now common in this price range, but very well done by LG.

As for the calls, the listening quality is really excellent and your voice will also be handled very well by the headphone microphones. The people we called there they felt very goodand although some background noises (from the wind on a bicycle to the snapping of fingers next to the earphones) could be heard, the voice remained clear and understandable. 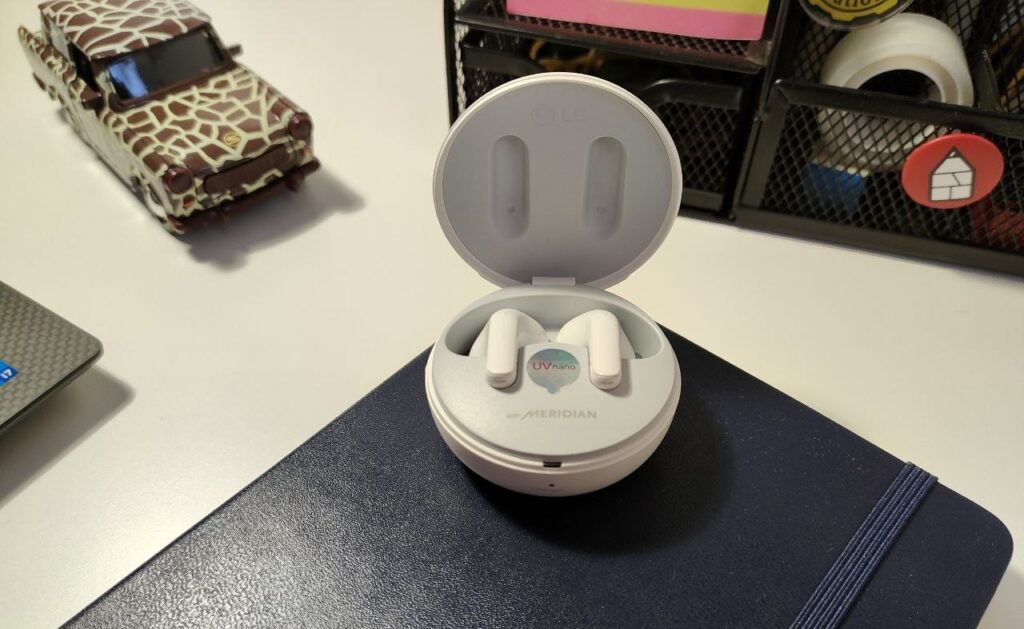 We also really enjoyed the ease in learning a manage the touch controls of these headsetsi, which you can adjust from the app (there is also the possibility to raise or lower the volume with ease). From receiving calls to activating the voice assistant, after a bit of running in we never made a mistake in calling the right command.

L‘app LG Tone Free allowed us to really make the most of the T90Qs during this review. And trust those who have tried a lot of headphone apps: they are usually much, much less useful. By connecting the earphones you can first of all view and modify the various touch controls in a very intuitive way. You can then activate the various features of the equalizer that we told you about.

The “Test My Best Fit“, Which helps you to find the best adherence with a test to choose the right rubber pads. We needed to use the larger ones, although they weren’t the ones that suited us most. But we have to admit that the app was right: Noise cancellation is increased, as well as grip while training or talking. 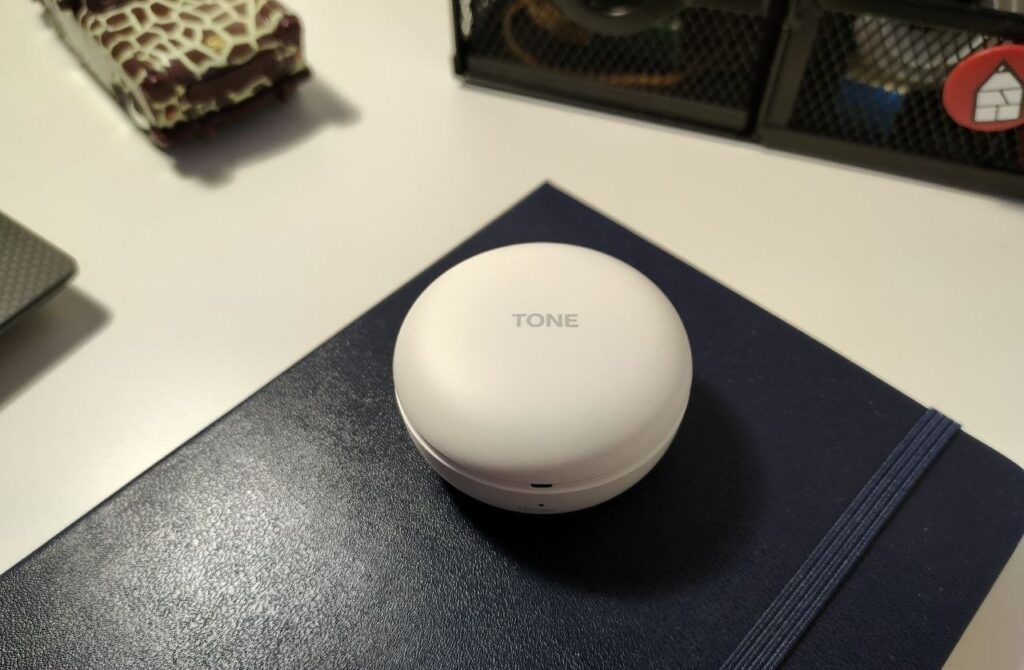 You can also activate the automatic Play / Pause when you remove the earphones, manage the noise reduction and block the touchpad, as well as manage the notifications from the various apps in a truly capillary way. There is also the function Find My Earphones, to make a loud sound and find them if you ever lose them. And in the Lab section you can test novelties like the Game mode and the Whisper mode (to speak without being heard).

And then there is the possibility of always keeping the UV Nano function, which usually only works when the case is charging. This technology, according to LG, allows you to eliminate 99.9% of bacteria from the headphones. It does not remove earwax or other dirt, so take care of your earphones anyway: but it is an added safety.

In addition, you can manage the audio quality of the function from the Lab Plug&Wireless, which may be our all time favorite feature. With the USB-C / AUX cable supplied, you can connect the headphone case to a device without Bluetooth. Like gym treadmills, an old TV or sound system. But also old Nintendo portable consoles or any other product with AUX output. And listen to music without a cable. A feature we loved.

LG proclaims up to 9 consecutive hours of listening with ANC off and 5 with ANC on, and we must admit that we have not strayed far from these results. This is not something unheard of, but more than what most users need.

The housing adds 20 listening (without ANC) and recharges in less than an hour, even if that’s enough 5 minutes of charging to get to an hour of listening. There is also the ricarica wireless: a truly complete package.

LG Tone Free T90Q Review: Are They Worth Buying?

LG proposes the Tone Free T90Q at the price of 229 euro, which is a figure where competition is really fierce. And if you were only looking for headphones for audio quality, there are solutions (usually more voluminous) that can do better, at least for our tastes: it seems to us that the sound is a little too processed.

Ma the LG Tone Free T90Q would be wasted just listening to music and a few podcasts. You can use them for immerse yourself in movies and TV series with three different spatial sound options, you can wirelessly listen to old TVs or stereos with the Plug&Wireless. All with a pair of light and discreet earphones, always sanitized with the tecnologia UV Nano and with an app that works really well (in an industry where only a few apps that work decently).

If you only want to listen to a few playlists, these headphones …