An adventure that has the flavor of a gothic fairy tale, in a world dominated by chance and chaos. Lost in Random is available for PC, Xbox One, PlayStation 4, Switch, and PC via Origin and Steam.

Lost in Random: the launch trailer

From today it will finally be possible to play Lost in Random, a title born from the collaboration between EA and Zonik Games. Players will find themselves in a dark and distorted world, where chance reigns supreme. The game, already winner of the Best Indie Award a gamescom 2021, is available for console and PC. In particular, it will be possible to play it on PlayStation 4, PlayStation 5, Xbox One, Xbox Series X | S, Nintendo Switch and PC via the EA, Origin and Steam app.

Lost in Random tells the story of two young sisters, Even and Odd, who find themselves in the hands of the evil Queen and her dark dice. Separated from Odd on her twelfth birthday, Even enlisted the help of Dicey, her nutmate, to cross the lands of the six kingdoms and save her sister. Dicey and Even will face explosive dice battles, which will lead to gigantic board game arenas.

“We were fascinated by the idea of ​​exploring the feeling of uncertainty as a starting point for Lost in Random, rather than focusing on predefined game mechanics,” he explains. Olov Redmalm, Game Director e Lead Writer di Zoink Games. “The dominant theme of randomness helped us be creative in every aspect of the game.”

The Lost in Random dialogues are signed by Ryan North, author of Adventure Time, Marvel Comics’ The Unbeatable Squirrel Girl, and more. The graphic style is instead inspired by Tim Burton, Sahaun Tan and Alice in Wonderland. 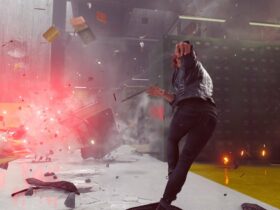 God of War Ragnarok: it will be the end for the Norse saga of Kratos