Manage the wireless connection inside your home or in a business environment it is not at all simple. Often, in fact, the thickness of the walls or the distance from the main router have a great impact on the performance of the Wi-Fi network to which you connect. Fortunately, there are some devices created to improve these problems regarding wireless networks, such as irouter mesh, Wi-Fi repeaters and powerline adapters: but how to understand which of these three is right for you?

What is a Wi-Fi mesh router?

To understand what a router mesh we must first of all dwell on the first part of the name. A router is an indispensable device in every home or office with an internet connection, which manages and allows the exchange of data between your environment and the internet itself. Obviously it does not stop there, because it also deals with managing security, protocols, port forwarding and much more, but simplifying it can be said that it is the router (hence router) of the internet to your home.

A mesh router, therefore, performs the same operations as a regular router provided by your internet service provider (also called ISP), but it doesn’t stop there. Multiple mesh routers within the same building, such as your home, allow data to be exchanged between them, allowing devices further away from the main router to connect to the internet via the nearest mesh device.

The peculiarity is that, unlike for example range extenders, they create un the only internet network within the environment. This means that if you move from one room to another, the device will not lose its internet connection it will “dock” to the nearest mesh router smoothly without interruption. Obviously the various meshes must be placed in such a way that they are able to communicate with each other, so according to the model you will have to respect the maximum distance.

Various mesh router devices on the same network can also be defined satellites that carry the signal everywhere. Coverage, using this option, is potentially unlimited since you can connect many satellites that communicate with each other by distributing the Wi-Fi network in every corner of the house. And, being all part of the same network, you will not notice that you have passed from one satellite to another. Each mesh router, in addition to being equipped with Wi-Fi antennas, is equipped with LAN ports to allow a wired connection with your PC.

What is a powerline (with Wi-Fi capability)?

a powerline adapter allows you to transfer the internet over long distances using the electrical network of the home or office. In practice, the first powerline must be connected to the current and to the main router via an ethernet cable, while the second and all subsequent ones are powered by the current and carry connectivity around the environment via the electrical network. These are useful in large environments where it is necessary to bring the internet to a remote room compared to the one where the main router is present, and two mesh routers would be too far apart to talk.

Powerlines are usually equipped with one or more ethernet sockets for LAN connection and the more modern ones also have antenne Wi-Fi per be able to connect wirelessly. Each powerline has a maximum speed expressed in Mbps which identifies the data transmission speed possible both via LAN and Wi-Fi. Obviously, the performance of the connection also depends on the quality of the electrical network in the environment.

What is a range extender instead?

Also called Wi-Fi extender or Wi-Fi repeater, it is a device – as can be deduced from the name – that allows you to extend connectivity within the home or business environment. They have been outclassed by the more modern and performing mesh routers, but they still are useful in small contexts where you want to extend your wireless network without spending too much. They have less functionality and customization than a mesh satellite. They simply retransmit the Wi-Fi network they receive from the main router, often forming a secondary one. In this case, therefore, it is necessary to choose which network to connect to, whether to the main one or to the one created by the range extender.

Like the other devices, they are available in different versions, which in addition to the wireless antennas provide LAN ports to connect to with the ethernet cable.

Mesh vs powerline vs Wi-Fi repeater: which one to choose based on cost? 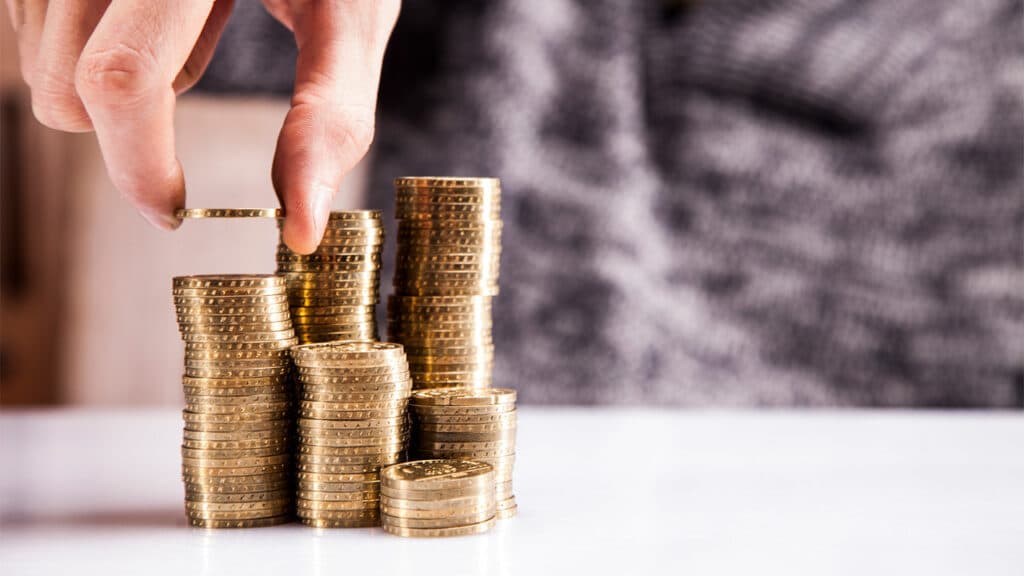 There are sectors in which it is better to invest in quality products than to save money perhaps regretting it later. But, if your goal is to improve your connection keeping a low budget, mesh routers are the devices to exclude. Each satellite is a complete router in itself, so the price obviously goes up. Repeaters / range extenders are the cheapest choice of the three solutions, in fact, they can be found starting from € 20. Obviously these don’t offer the flexibility, customization and security benefits of meshes, nor the coverage and performance of powerlines. The latter are less expensive than mesh systems, but must be purchased in at least 2 units, so they will cost more than classic Wi-Fi repeaters.

Which to choose based on performance?

First of all, to address the issue of performance, it is necessary to distinguish between bandwidth and signal coverage / strength. Bandwidth determines the amount of data that can be transmitted during a connection, and it is important to purchase hardware that makes the most of your connection’s bandwidth.

Taking this parameter into consideration, the worst option will be Wi-Fi extenders. Their performance is largely based on acquiring a Wi-Fi signal and repeating it, but in this process the bandwidth can decrease, taking advantage of only a part of the true capabilities of your connection. Mesh routers perform at their best in this sense if used in a medium-sized environment, since the speed of a satellite will also depend on its proximity to the main mesh router. If your environment is very large, and covered by a single electrical circuit, the best choice for conserving bandwidth is the powerline.

If you take it into consideration instead coverage, so how much space within an environment they can cover, and the strength of that coverage, we again find ourselves excluding Wi-Fi repeaters. Extenders will typically give minimal improvements in coverage and power, as they are simply repeating the available bandwidth and speed from where they are delivered. Mesh routers, on the other hand, can be used to bypass difficult physical obstacles in your environment, such as thick walls and long corridors that greatly diminish Wi-Fi coverage. However, as with repeaters, coverage and signal strength will depend on proximity to the main router. And they will have to be placed in strategic points. The best choice, again, is to adopt a powerline that, taking advantage of the power line, will not mind extended walls and environments.

However, it should be mentioned that powerlines do not automatically switch your device to the new connection as you move around the house, as meshes do. This means that your smartphone will still remain connected to the first unit, even if the coverage is really low and if there is a powerline closer around you. 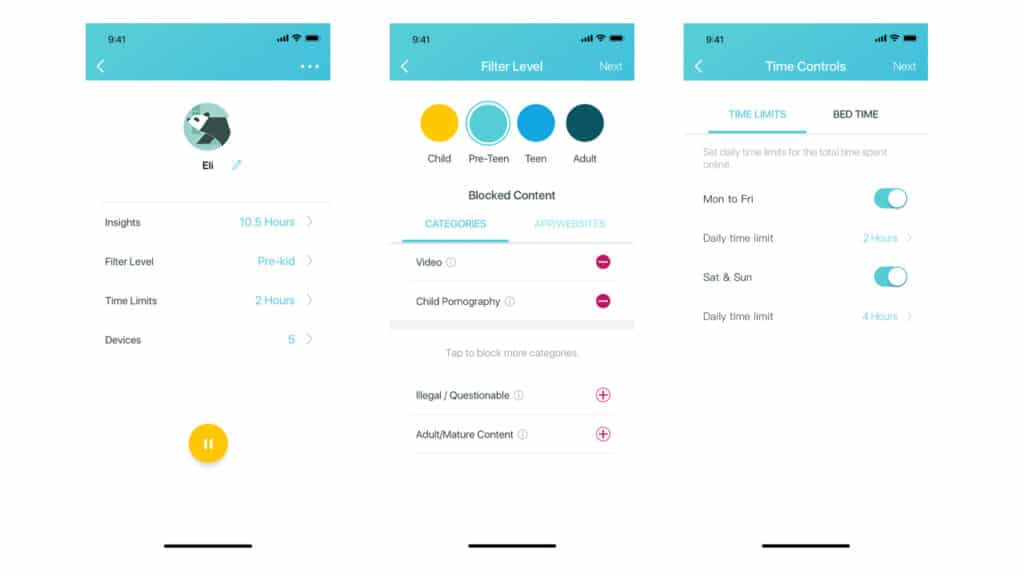 An example of customizing a mesh network. Photo: TP-Link.

If, on the other hand, you also want to consider the aspect of the safety, the best choice is i router mesh. They usually have dedicated applications that allow you to manage and configure the network, as well as security and other options such as parental controls. They often have a dedicated encryption protocol and applications usually allow the creation of secondary networks with different credentials.

The right hardware for you

As you may have understood, each of these devices allows you to extend and improve your home or business connection, but with some differences. And, as often happens, there is no right or wrong choicea. In definitiva Wi-Fi repeaters are the cheapest, but they are good only over short distances (in a house distributed over several floors it already becomes problematic). And especially if you don’t need to customize your network too much, or use particular security features. THE router mesh they allow better customization and never lose the connection while moving from one end of the house to the other, but they are more expensive and must be positioned in an intelligent way along the environment to be covered. Finally i powerline they are positioned in the middle, both for safety and for other functionalities, but they win as a cover since they can be positioned at opposite ends of a house using the power line.

Wi-Fi mesh and powerline, the hybrid that conquers 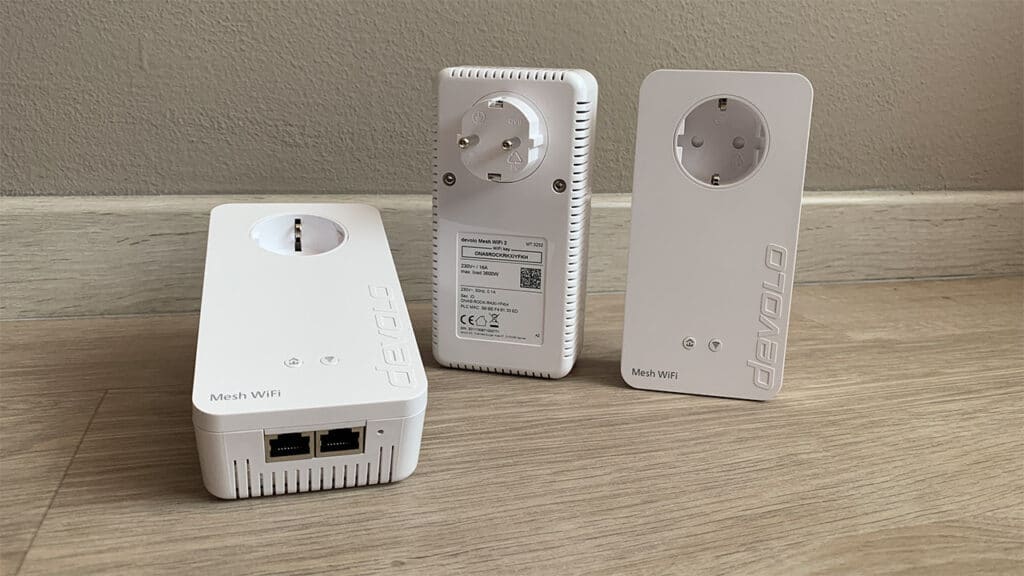 In the last period some companies have also made gods hybrid mesh devices with powerline, which therefore combine the best features of the two categories. An example is the TP-Link Deco P9, which we have personally tested and which we recommend, which allows the creation of an extended Wi-Fi network – without signal loss by moving from one corner of the house to another – even in areas not reachable with pure Wi-Fi mesh technology . All thanks when adding powerline support which uses the electrical system. Devolo Mesh Wi-Fi 2 and Devolo Magic 2 Wi-Fi devices also use mesh and powerline technology. Obviously this hybrid technology involves a price increase but you will not regret it: in our opinion it is the best solution to extend the wireless connection at home.