It doesn’t happen often, doing this job, to stay to enter. MG, on the other hand, succeeded, bringing his own to the Italian market a little by surprise first fully thermal car, the petrol-powered MG ZS. With this spacious and technological compact SUV, the revived Morris Garages wants get serious on the Italian market, focusing on technology, electrification of the range and a very high quality-price ratio. We have tried the new MG ZS and the first electric of the new generation of MG, Marvel R, in a first contact he made to us understand what MG is made of. Are you curious to find out how these new cars behave?

The MG strategy: electrification and technology for everyone, starting with the petrol-powered MG ZS

As we told you at the beginning, it almost never happens that, at a presentation, we can be amazed. Today, in fact, we arrive at the events prepared and already prepared for what we will experience. As with all rules, however, there is a ‘exception. The revived MG brand, which we have already intercepted as one of the most interesting emerging brands, has pulled out of the hat the unprecedented MG ZS is petrol, the first fully thermal model of the renewed Morris Garages, an English brand born in 1922 and part of the galaxy since 2007 SAIC Motors.

For those unfamiliar with SAIC, this is the first Chinese manufacturer, and of the seventh global automotive group in terms of units sold, with an annual production of over 7 million cars. A colossus therefore, which in MG has a brand with an important history capable of returning strongly to the European market. After officially returning to the UK in 2011, it took MG another 10 years to return to the rest of Europe as well. In 2019 MG arrived in the Nordic markets with its electric proposals, while in this one 2021 yes you are establishing in the rest of Europe, including Italy.

I numbers behind MG’s return to Italy are very important. In a few years, with a pragmatic and valid range, MG got the1.5% market share in the UK, and also in the rest of the continent it is laying the foundations for a truly surprising future. In 2020, in full pandemic, MG totaled 29,000 units sold in Europe, not bad for a brand that until then disappeared from the radar. In 2021, with the timid arrival in the most important markets such as France, Germany and Italy, MG reached 37,000 units sold in October, 2/3 of which are electrified.

MG is a brand reborn from scratch, in Europe as in Italy. Started with very few employees now MG Italia has more than 20 central professional figures, with a network of dealers more and more extended, which will count by the end of the year 40 dealers and 70 outlets scattered throughout Italy. “We do not have nothing to envy to other builders, and we built it all in either 8 months“, He proudly declares Andrea Bartolomeo, Country Manager of MG Motor Italy. “Each month we achieve 100% more sales than the previous month, and we got to 1,000 registrations in 2021, with a network still under construction. 2021 was a year of transition: i2022 will be the real launch of our brand “.

The MG range is expanding, but always with an excellent quality-price ratio

In the few months of presence on the Italian market, we began to know one lively range and in full transformation. Obviously, the small and light sports cars that MG has become famous for are a thing of the past. That type of car no longer excites. The focus of the public is no longer on mid-engined, rear-wheel drive sports cars, as was the last MG of the “old guard” to be produced, the TF, ma su SUVs and electrified cars.

MG therefore managed not to remain too anchored to its glorious past, and to rise from the painful closure in 2005 with strength and enthusiasm. The new thermal MG ZS and the electric Marvel R are in fact included in a lively proposal in full transformation, forming the starting point for the electrified world which also includes MG Marvel R, the other protagonist of the day. The MG range is pretty varied, with models already on the market and close to their debut very interesting. At the moment, in fact, in Italy we have known, in addition to the ZS EV, the electric version of the car tested today, also the MG EHS Plug-In Hybrid, the compact SUV with hybrid system on tap. 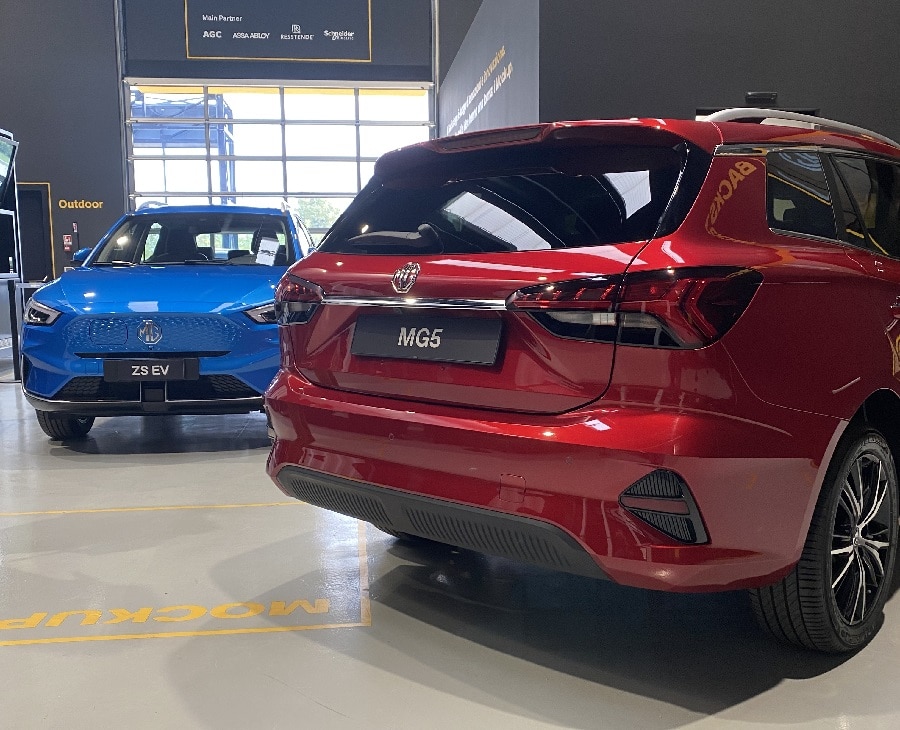 Thanks to a power of 258 HP, a good amount of space and a very pleasant look, EHS is the option for those who travel a lot and do not want to throw themselves headlong into electric mobility. In addition, however, in addition to the restyling of the electric version of the ZS, arriving in 2022, Marvel R and the restyling of the ZS EV, the very interesting station will arrive at the beginning of 2022. MG 5 wagon. First fully electric midsize station wagon in the world, MG 5 sports a truly sporty look, especially at the rear, and top-level contents. Capable of a lot of space, with a 1,400-liter trunk capacity of maximum capacity, and 400 km of autonomy in the WLTP cycle, will debut in 2022 at a price of 30.000 euro completing the MG offer for now. Then in 2022 the first sports car of the new MG course will arrive, the Cyberster, which could become a new reference among electric sports cars.

Driving a petrol-powered MG ZS: lively with the 1.0 turbo, economical with the 1.5 petrol. And what a package at a price lower than a Panda!

But let’s finally talk about the cars we had the chance to test. Unfortunately, our experience on the thermal MG ZS and Marvel-R was lightning-fast, with a test of about 40 km on both cars. We therefore hope to test them very soon in order to be able to judge them completely, but already from this first contact we have found two really cars. interesting. Although the Marvel R is, on paper, the most intriguing in this 2021, what surprised me most was the thermal MG ZS. And this not only because none of us knew she would arrive in Italy, but because behind a very low price hides a really good car. 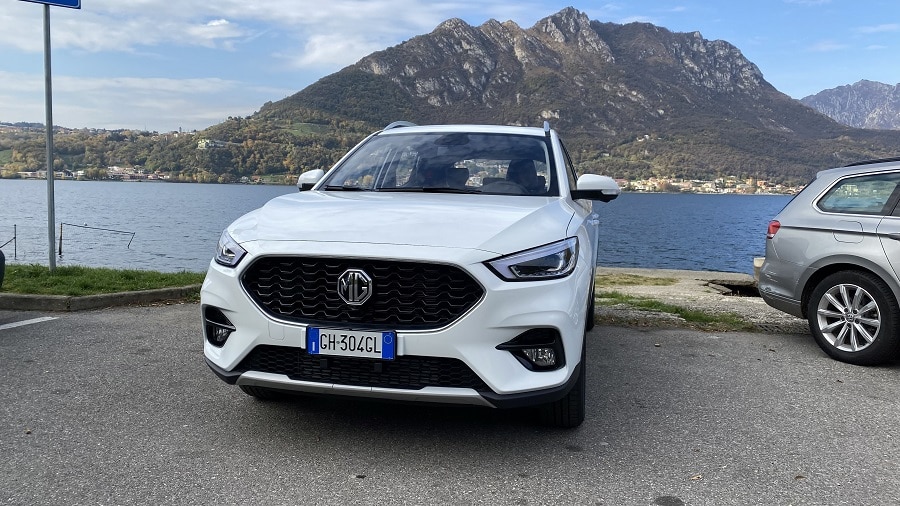 MG ZS thermal is indeed a Rather bulky B-SUV (It is long 4,31 m, almost 10 cm more than a Volkswagen T-Roc), equipped with a really roomy trunk, from 448 liters. the lines are quite elegant and conventional, with a rather aggressive and successful front, where I see some references to Mazda SUVs, while the rear is a little more anonymous but still pleasant and well designed. The assemblies outside leave no room for doubt, being even better than some European rivals. 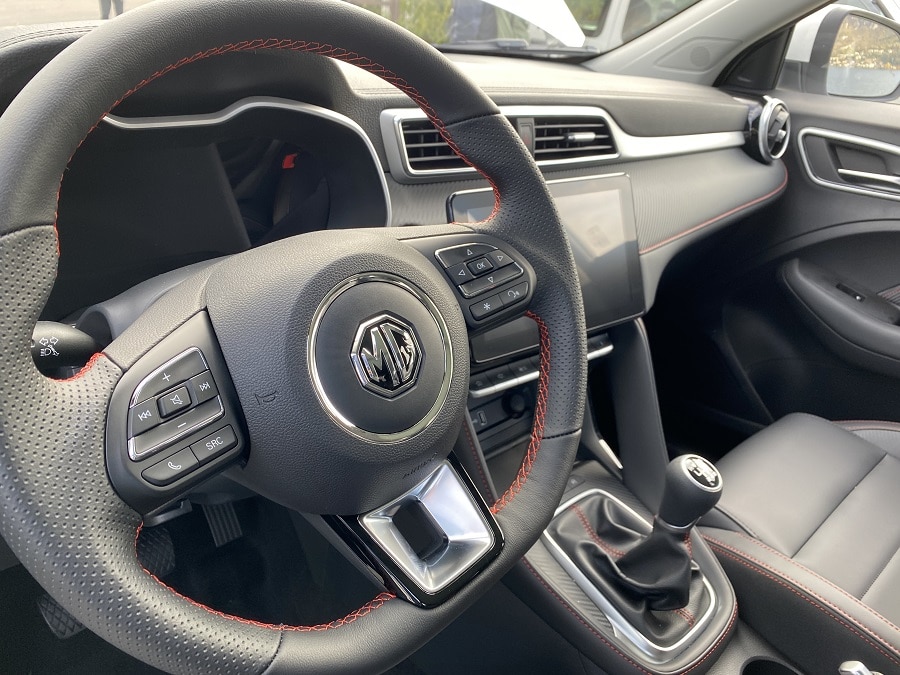 Inside of, the dashboard is made of soft plastic, with a soft carbon-fiber-like fabric upholstery perhaps a little tamarro to look at but surprisingly pleasant to touch. Here, the pleasantness of the interior materials was really the biggest surprise of the car, which turns out to be well assembled and a nice place to spend time. It surprises the instrument panel, digital and original, with a “numeric” tachometer and without traditional hands. Indeed, in addition to the numerical indication of the laps, the increasing band of laps is almost reminiscent of the instrument panel of a Honda S2000 (with due respect, of course). All the controls are concentrated in the central 10.1-inch infotainment screen. The physical controls below then refer to the air conditioning, radio and navigator. 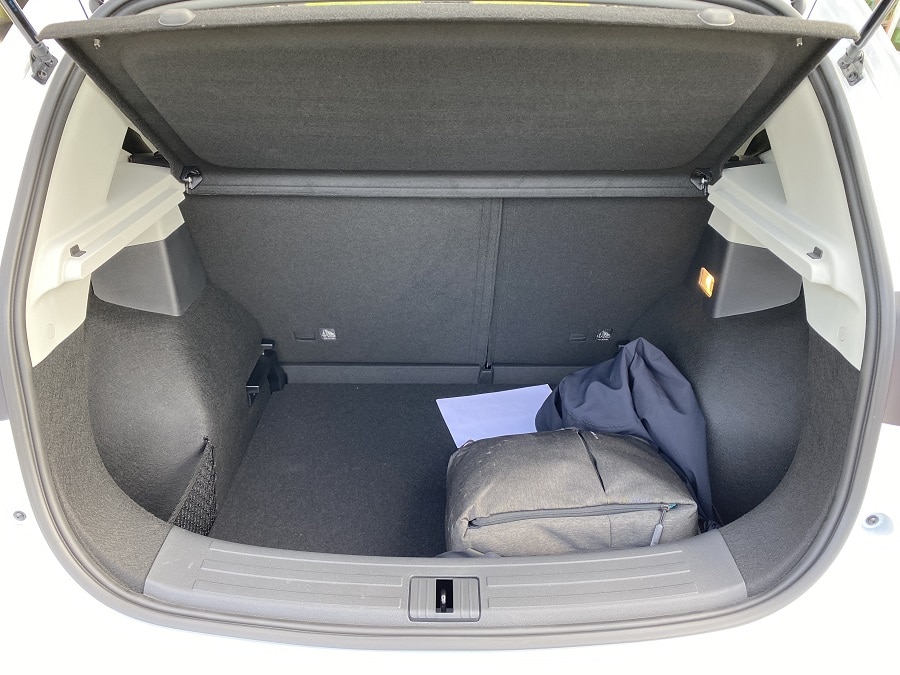 Too bad we do not have physical controls for the climate, while instead it is precisely the proprietary infotainment system the thing that I found less in focus. Far from that of the Marvel R, does not convince for graphics and functionality. But there is a surprise that makes him reassess immediately. The system is in fact equipped as standard with Android Auto and Apple CarPlay, cable. The two mirroring systems are integrated very well and work perfectly, limiting all the limits of the proprietary system. Considering that these are the systems that customers use the most, the unintuitive system could be a problem not a problem.

Driving the thermal MG ZS: quiet, but much more refined than you think

And he drove herto? Don’t imagine being behind the wheel of an MG of the past. Here, in fact, it is not sportsmanship that is at home, but the comfort in everyday driving. the suspensions they are soft and perfectly copy the roughness of the asphalt, while it steering it is light and easy, but never very precise and with little feedback, marking a certain distance between the driver and the car. We are not therefore faced with a car designed for driving pleasure, but is it really what we are looking for from an SUV? I would say no. On a compact SUV, comfort, ease of driving and the pleasure of grinding miles without effort are the real points to look for. And in this, MG ZS thermal amazes. Very easy to drive, with both engines in range, it behaves smoothly, relaxed and capable of restoring comfort and relaxation. 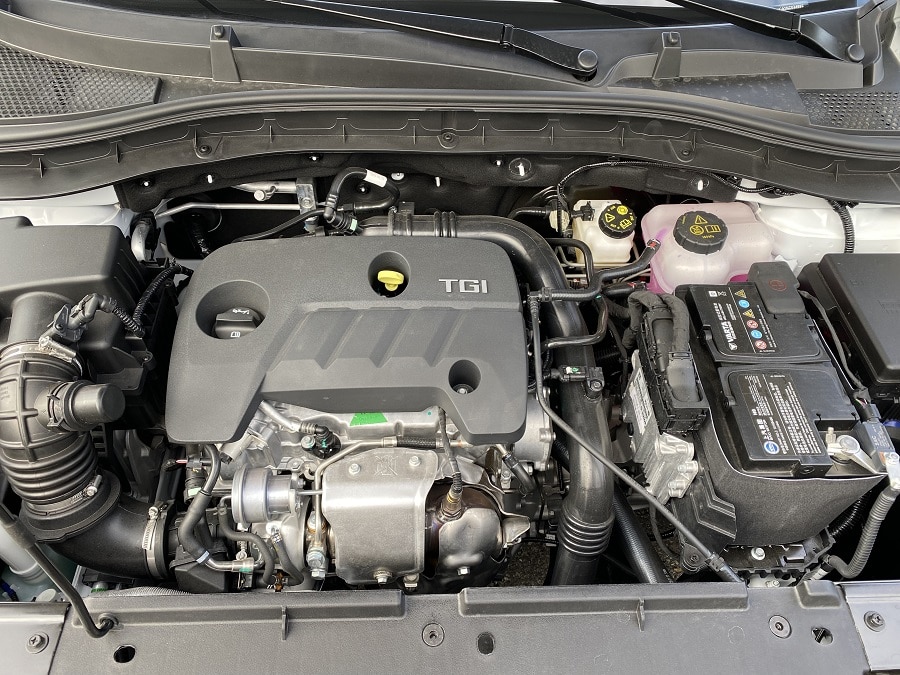 MG ZS thermal is equipped with two engines in this launch phase, both of them run on petrol. The range consists of a 1.5 4-cylinder naturally aspirated 107 HP it’s a 1.0 three-cylinder turbo with 111 HP and 160 Nm of torque. Both available with automatic gearbox, MG ZS thermal is combined as standard with a manual transmission 5-speed on 1.5 and 6-speed on 1.0. If you want low fuel consumption and a silent and fluid engine, the 1.5 naturally aspirated is for you. Even with 5 gears and with an aggressive driving style, going below 14 km / l is very difficult, with a consumption that is over 15 km / l from instrument. The 1.0 turbo, on the other hand, is decidedly more lively and perky. Plus, it doesn’t vibrate as much and the 6-speed gearbox is more pleasant to use than its 5-speed counterpart. 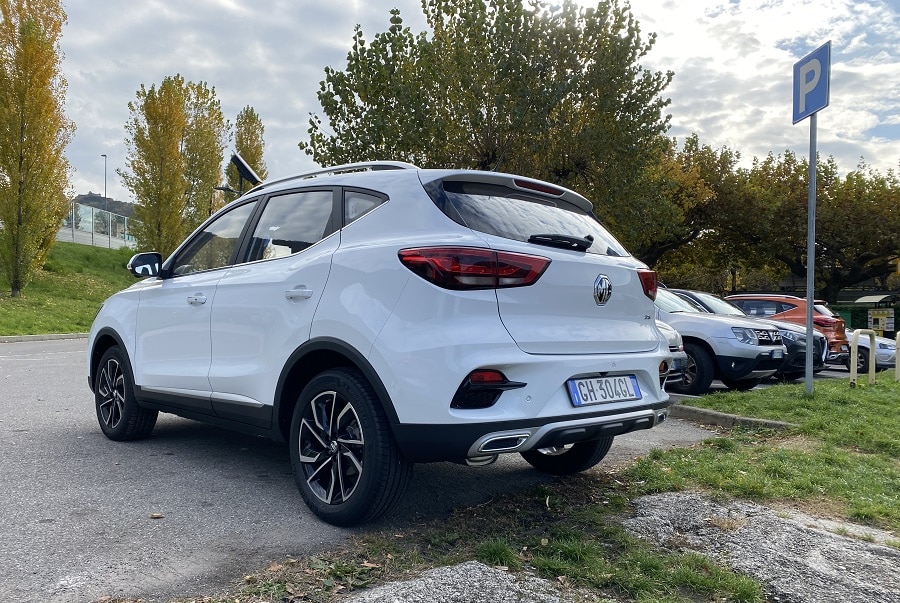 It consumes a little more, it is true, but gives MG ZS a refinement and a shot from the low that has nothing to envy to its European rivals. On the other hand, what European rivals must envy them is the price. MG ZS thermal is in fact offered in the launch phase for only 13,950 euros with the 1.5 aspirated engine. The official price list instead starts at just under 16,000 euros, with the 1.0 Turbo in the top of the Luxury range version that does not exceed 20,000 euros. This offers larger wheels, a reversing camera, a sunroof and other details of considerable care and value.

Version already Comfort, however, it has all that you need and even more: 10.1-inch infotainment, cruise control, parking sensors, and even LED headlights. To know in detail the offer of thermal MG ZS, here you will find the link to official configurator MG. In any case, for the contents offered at a price well below that of an average-equipped FIAT Panda City Life, this MG ZS is … 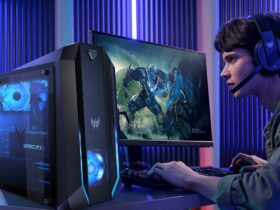 Acer returns to Milan Games Week: Predator will be available in the eSports arena 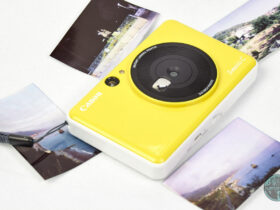 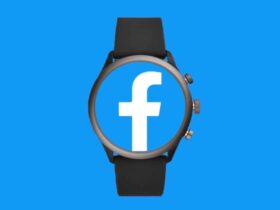 Facebook: The company’s new smartwatch will have a notch on the display 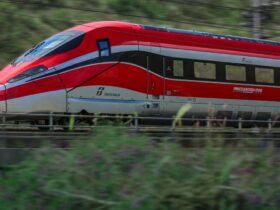 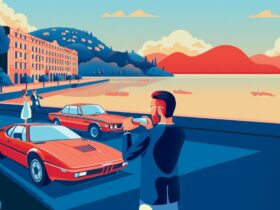 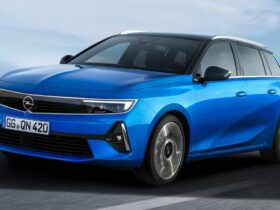 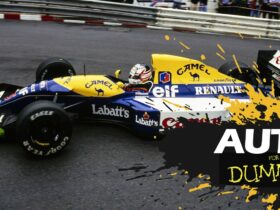