She has been described as the star of the Nissan galaxy. What is it about? A new sports car? Of the highly anticipated electric Ariya? In fact, it’s a model you wouldn’t expect. We were in fact at the static preview of the new Nissan Townstar 2021, the compact van from the Japanese manufacturer. Technological, complete and available for the first time in both car and van versions, the new Townstar consistently continues the path of Nissan electrification, offering a thermal engine and an electric version, and is also the first to bring a great novelty to the House. Which? Let’s find out everything in detail.

It may seem exaggerated by Nissan to define the new Townstar as a star, especially when the Japanese house is ready to launch very interesting models such as the new full electric Ariya, the new generation of Qashqai and more. In reality, however, the Nissan Townstar is an important step in the revolution that Nissan is facing.

2021, with Nissan Townstar and Qashqai in the lead, marked the debut of a new generation of cars of the Japanese company. Technological models, complete from the point of view of comfort and safety, and that they focus a lot on electrification, but in a different way. Mild Hybrid and with the innovative e-POWER system for Qashqai, petrol and electric for the Townstar. But before we talk about mechanics, we must also include Nissan’s new offensive among commercial vehicles in the discussion. Market in which the House was once very strong, especially among compact vans like the legendary one Serena, Nissan has decided to forcefully return to the light commercial vehicle market, the so-called LCV.

Why return to a market where Nissan, despite being present, had never played a leading role? “Unlike the car market, commercial vehicles are growing: compared to 2019, sales this year have increased by 2%. ”, he explains Marco Toro, President and CEO of Nissan Italy. “The merit of this growth is to be found in theincrease in e-commerce: during and after the pandemic, everyone started shopping online. Online purchases have grown, and with them home deliveries. Compared to 2020, online purchases grew by 65% ​​this year: higher were therefore the last mile deliveries, often in the ZTL and in the cities. This is why being in this market has become important: we have decided within our strategy NissanNext to focus on commercial vehicles “.

Technological models but electrified as much as possible, consistent with Nissan cars

With these new needs, therefore, he mercato degli LCV has grown has changed, is more dynamic and eager for modern and technological models, but above all electrified to be able to deliver freely even in the center. For such a modern and different market, even Nissan had to make a small internal revolution. So goodbye to the old somewhat abstract names like NV250 or NV300, and welcome back to the names of the previous generation of Nissan vans: Townstar, Primastar and Interstar. All developed with strategic alliances with Renault (and not only), even here the watchword will be electrification. “We couldn’t launch the new Nissan Townstar in 2021 with a diesel fuel. It would have been inconsistent and not in continuity with our decision to offer only electrified models by 2030. ”, points out Toro.

Townstar will therefore also not be launched with diesel engines, as has happened for all new generation Nissan models from the Juke onwards. In the price list there will be only a turbocharged engine and a 100% electric version, both for the passenger and for the transport version. The same will then happen for the new generations of the larger vans, Primastar and Interstar, which at the moment are still only available with endothermic diesel engines. However, it is one transition phase: there are several in the pipeline choices, one among all the adoption of the system e-POWER featured on Qashqai. This choice is a lot brave: Nissan indeed wants to become a point of reference for those who want to transform their company and be more sustainable. 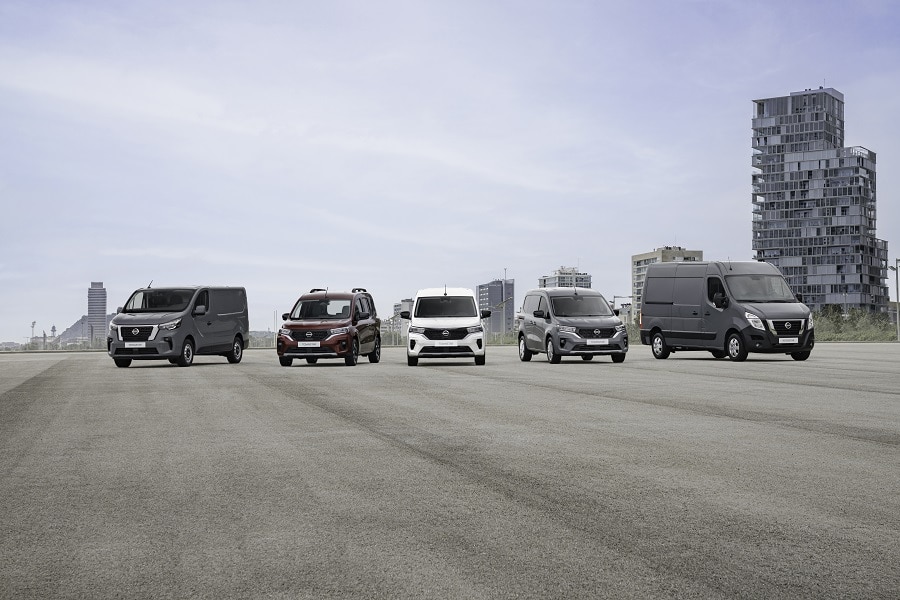 For this it was decided togoodbye to diesels, a drastic but coherent measure, e which will not be without consequences. While Nissan has kept the petrol engine to reassure the traditionalist customer (the electric van market in Italy is still very small: it accounts for 7% of the total), the absence of the diesel engine will not help to sell as much as it could in the short term. The Japanese manufacturer knows this well, and in fact has rather affordable claims. “We aim for 2.5% of the light commercial vehicle market. By offering a diesel engine, we would probably have been able to aim for 3 times higher numbers. However, we have chosen the path of consistency, and we want to become the reference for electric vans. ”, clarified Toro.

Townstar is the first Nissan with the new logo: from the outside it betrays the kinship with Kangoo, with a front inspired by Ariya

But after talking at length about Nissan’s strategy for commercial vehicles, here is our protagonist, Nissan Townstar, is shown inside the hall of the Salone Novecento, in the EUR area in Rome. Presented in both car and van versions, Townstar marks an almost surprising debut. It is in fact the first Nissan car on the European market with the new logo, presented a few months ago. A very special choice, which makes the new Japanese van even more interesting. In reality, however, under the new Nissan logo is hiding one of our (not too much) old acquaintances: Renault Kangoo, that we tried a few months ago. 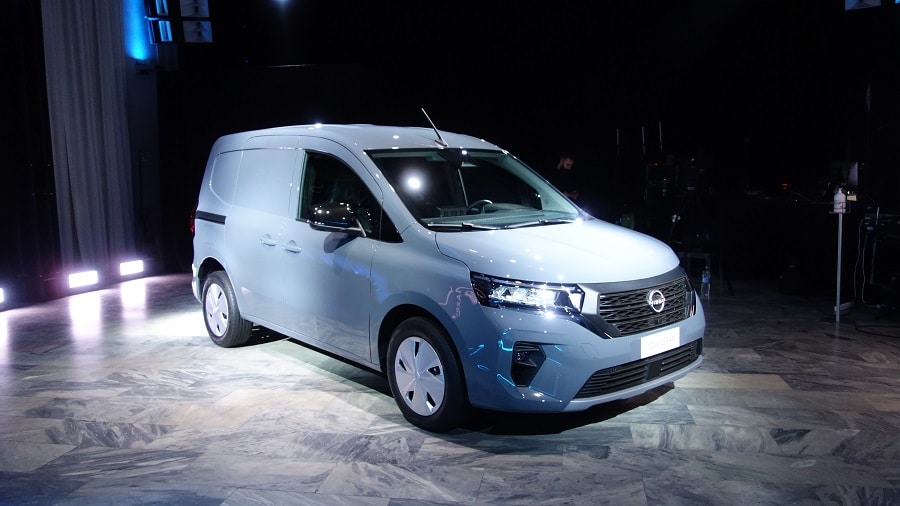 It is in fact no secret that Nissan Townstar 2021 is made on the same base as Renault Kangoo and Mercedes Citan. In addition, it is also built in the same factory in Maubeuge, in the north of France. The Nissan designers, however, have managed to customize the front with care and taste. Compared to the nice look of Kangoo, in fact, Townstar is more elegant and sharp, with gods to do (full LED as standard) more thin and stretched out. The now legendary mask stands out on the front V-Shape, a hallmark of all Nissan. Also changes the front bumper, with different fog lights and a more dynamic design, while laterally and at the rear the differences are few. This however is not a defect, indeed. We had appreciated Renault Kangoo precisely for therefined and modern aesthetics, which differentiates it a lot from the classic medium-sized Vans. 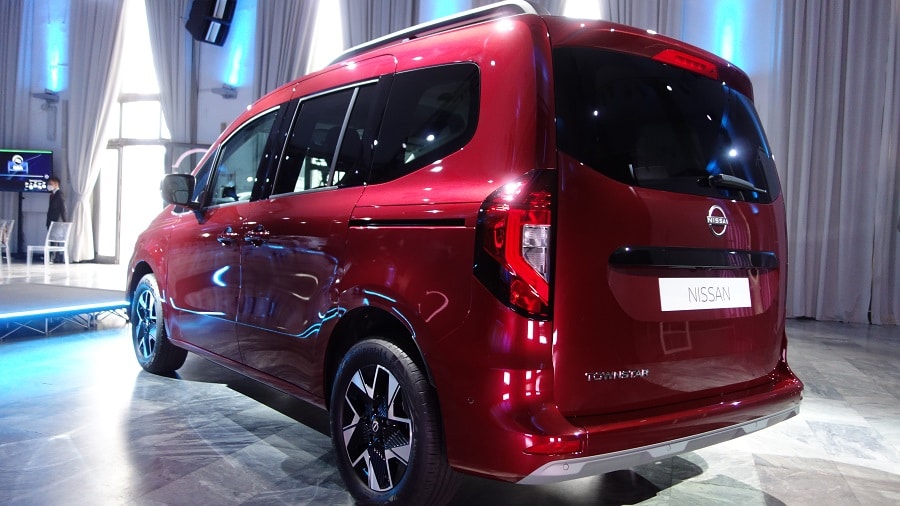 They remain, for our joy, the arches at the level of the rear wheel arches, which make the rear view less square and more automotive, as does the rather slender side profile for the type of car and the roof bars. Ultimately, although the kinship is noticeable, the Nissan Townstar is very pleasant to see, both front and rear. A little detail then comes on electric version, Townstar EV. The refill nozzle it is in fact positioned behind the Nissan logo front, which is also on the electric backlit. To further differentiate the zero-emission version, then, Townstar EV has a concave bezel, very particular.

Inside Nissan Townstar 2021 offers space and practicality, and the technology is great

After appreciating the Nissan Townstar’s exterior lines, inside we are faced with a small deja-vù. On an internal level, in fact, the sharing with Renault Kangoo was very extensive. The dashboard and interior layout are in fact almost the same as the French van, both in the van and passenger versions. We therefore find the 6-speed manual gearbox lever, the only transmission available with the thermal engine, in a raised position, the cantilevered infotainment screen and an elegant and well-designed dashboard, much more like a car than a commercial vehicle. . Then there are some small geniuses derived from Kangoo. 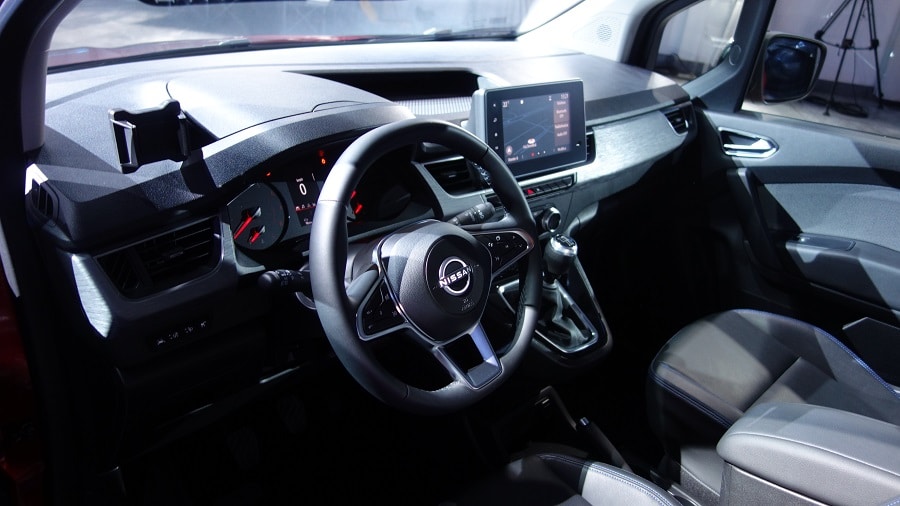 Which? For example, the drawer above the windshield, the glovebox above the instrument panel with integrated smartphone holder that can be mounted on the right or left, and surprising attention to detail. Even behind the differences are minimal, with a spacious and easily accessible sofa thanks to the rear sliding doors with the largest access door in the category, 82.8 cm wide. The trunk it is one meter long, and measures almost 800 liters of capacity with the 5 seats in position, and can go up to almost 1800 by folding down the sofa. The version Cargo, on the other hand, it is available in two sizes, a short wheelbase L1 with a length of 4.48 meters (the same as the passenger version) oa long wheelbase L2, with a length of almost 5 meters. The scope comes to 3.3 m3 for the short wheelbase version, it’s at 4.9 m3 for the long wheelbase version. 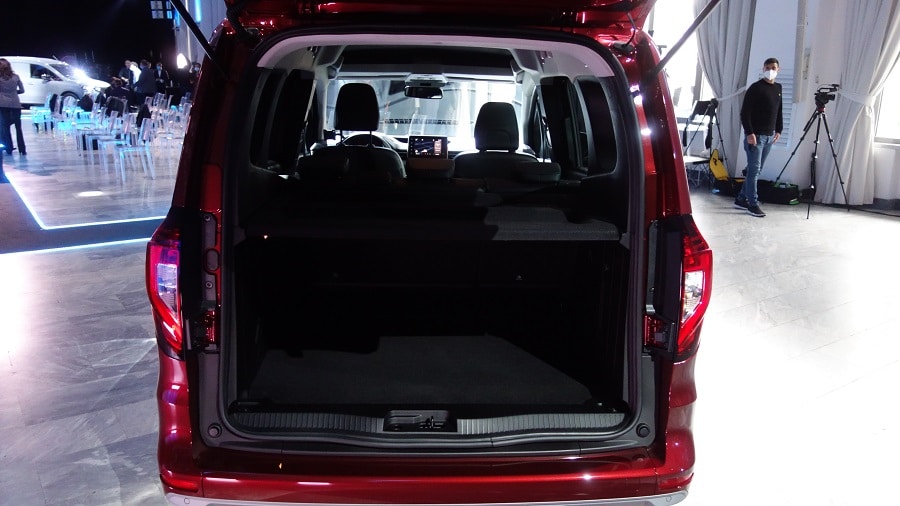 There are some though differences, which mainly concern the electric version. On a technological level, in fact Nissan Townstar equipped with the 1.3 petrol has the analogue instrument panel and it 8-inch infotainment screen (the same as Kangoo). The version electric instead sport one smaller, 7-inch multimedia screen, but make up for it with a 10-inch digital instrument cluster. In addition, the tech equipment is of an excellent standard not just for a commercial vehicle, but for a car of this size in general. In fact, the 360-degree camera system, automatic emergency braking, two systems for assistance in the event of side wind or trailer skidding are available. Even the Adaptive Cruise Control with ProPilot system is present, and Android Auto and Apple CarPlay are standard and wireless.

Petrol or electric, cargo or passenger: there is a Nissan Townstar 2021 for every need on the CMF-C platform

We conclude with a brief examination of the mechanics of Nissan Townstar 2021. now it will not surprise you to find that the mechanics And shared with Renault Kangoo. So Townstar is also based on the Renault’s CMF-C platform. Also shared with Nissan Qashqai and Renault Mégane and Scenic, among others, this sharing is part of the Renault-Nissan Group’s strategy. move from the current 9% of models built on shared platforms to a share of 50% by 2025. It is therefore a automotive mechanical basis, which allows you to have the comfort and driveability of a car but with the practicality …