New appointment with One True Pairing, the column dedicated to the most beautiful couples of the TV series: this time we talk about Stiles and Lydia, protagonists of Teen Wolf

Even though it’s been years since the conclusion of Teen Wolf (it was 2017 when the last episode aired), we are far from having passed Stiles and Lydia, whose relationship, built piece by piece over the course of six seasons and exploded only in the last few episodes, was the perfect example of slow burn in a TV series.

We remember together with ours Top Ten the most beautiful moments that have seen them protagonists in the new appointment with the One True Pairing column.

The Wild Hunt and the Ghost Riders arrive in Beacon Hills, beings endowed with supernatural powers that kidnap people’s souls and erase them from existence making them forget by everyone. Before he is taken too, Stiles confesses to Lydia that he is in love with her by whispering “Remember I love you”.

Lydia has been locked up at Eichen House by her mother, and Dr. Valack, determined to have Banshee amplify her powers, tortures her by drilling her skull. The protagonists work to save their friend, and it will be up to Stiles to take her away from danger. When it looks like the worst is about to happen, Stiles begs the girl to come back to him. Upon awakening, Lydia manages to tell her mother “Stiles saved me”.

In the sixth episode of the sixth season, the boys have to contend with the presences that haunt the Glen Capri motel. When Scott is possessed and, covered in gasoline, threatens to set himself on fire, Stiles approaches him and tries to bring him back to his senses. The boy succeeds in the enterprise, but the fire spreads and it will be only thanks to the providential intervention of Lydia that Stiles will have saved his life.

4. Lydia is beautiful even when she cries

Lydia is in tears from the constant visions of Peter that are making her lose her mind. When Stiles approaches her, she tries to chase him away because she doesn’t want anyone to see her cry. The boy then whispers to her that he finds her beautiful even when she cries.

In an attempt to defeat Deucalion and the pack of Alphas, Deaton offers Stiles, Scott and Alison a ritual in which he will stop their hearts for a few minutes to initiate a connection that leads them to find the exact location of their parents , kidnapped by their enemies, they are hidden.

To do this, however, the three need an anchor that keeps them connected to life, someone with whom they have an emotional connection. For Allison it is Isaac, for Scott it is Deaton himself while for Stiles, clearly, Lydia.

Stiles is in a panic attack, and Lydia is standing there beside him. To calm him down, she kisses him passionately. Although the circumstances are far from romantic and the two are not yet a couple, the one in question is their first kiss.

After Stiles is canceled by the Ghost Riders, Lydia feels a void she can’t fill. He knows it’s something he can’t remember, but he doesn’t know what it is. Seeing Lydia desperate is devastating, but it shows how the connection between her and Stiles goes beyond memory.

8. The kiss after the return

Stiles manages to escape the Wild Hunt and finally returns to Lydia. The girl reminds him that she never answered his “I love you”, but that there was no need because they both know. Stiles takes her in his arms and kisses her.

Lydia is shocked by the death of Meredith, the only other Banshee she has ever known. When she and Stiles find her lifeless body, Stiles holds her in his arms.

During the first season, Stiles confesses to Lydia that he has been in love with her since elementary school and invites her to the prom. Although at that point in the story the girl has no romantic interest in her, she accepts that Stiles is her date, making the boy’s evening unforgettable.

She is the most popular girl in school, he is the nice nerd who tries in every way to win her heart. Although the beginning of their relationship is cliché, the way in which the two grow and mature together, first becoming friends and then, slowly, in love makes their relationship special. 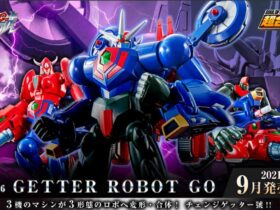 Bandai: al via i preorder per Soul Of Chogokin 96 Getter Robot Go

Wreck-It Ralph | The must-sees of animation