Oppo announces a preview of some of the news of Reno6, the new smartphone that will stream the 9 September at 10.30. A full-tech smartphone, which uses artificial intelligence to elevate its camera to another level: with Oppo Reno6 you can shoot a video portrait of real artists.

Art can come from any tool. Smartphone included. And that’s why Oppo has decided to launch its new smartphone from Louis Vitton Foundation in Paris. A place that synthesizes the fusion of technology and avant-garde design. Also, the artist Kelvyn Colt will accompany the international launch of Oppo with his own music. Above all, acting as a soundtrack for Reno6’s new video portrait functions. 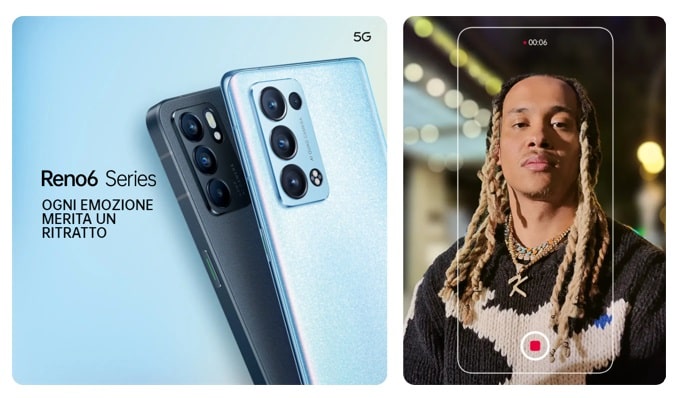 Indeed the new series uses artificial intelligence to give content creators the means to express their imagination and your own style. A unique rendering, which allows you to record videos of superfine quality. But it’s not just the cameras that shine in the new Oppo device. With the newest proprietary technology OPPO Glow, you can give a unique finish and embellish the design of the devices.

In addition to the artistic aspect, Oppo Reno6 promises a lot of substance. In fact, Oppo’s engineers speak of a maximization of the battery life, which should guarantee full days without even thinking about looking for a power outlet. Furthermore, overall performance improves, with the new line-up that promises great reliability across the board.

As technology enthusiasts, we are really curious to test these promising innovations. If you are too, you can follow the launch event of the new line-up online to preview the new AI frontier of video-portrait, the 9 September at 10.30 on YouTube, Facebook and Twitter by OPPO. At this address instead you can follow the official page of Oppo Reno6.