We had the opportunity to preview Peaky Blinders Mastermind, the game dedicated to the Netflix series about Tom Shelby and the most respected family in Birmingham

Peaky Blinders Mastermind, the game based on the events of the homonymous (and very famous) Netflix series will be officially released in the coming summer months. We at TechGameWorld.com, however, had the opportunity to try it in preview and today we want to tell you our first impressions of the first three levels of the game. Are you ready to take on the role of Tommy Shelby and family to conquer Birmingham?

Peaky Blinders Mastermind, as already mentioned, is the game dedicated (precisely) to Peaky Blinders, one of Netflix’s flagship shows that certainly needs no introduction. Mastermind tells of the events that precede the first season of the TV series, so we will find ourselves living a series of non-canonical events with the series, while maintaining the setting of the old Birmingham of the ’10s. The game starts with the back to town of the men of the Shelby household, and users will see themselves committed to helping Tommy’s rise to dominate the city. Will the latter really be worthy to lead the band and become the true “mastermind” of the Peaky Blinders? Let’s find out together in this preview! 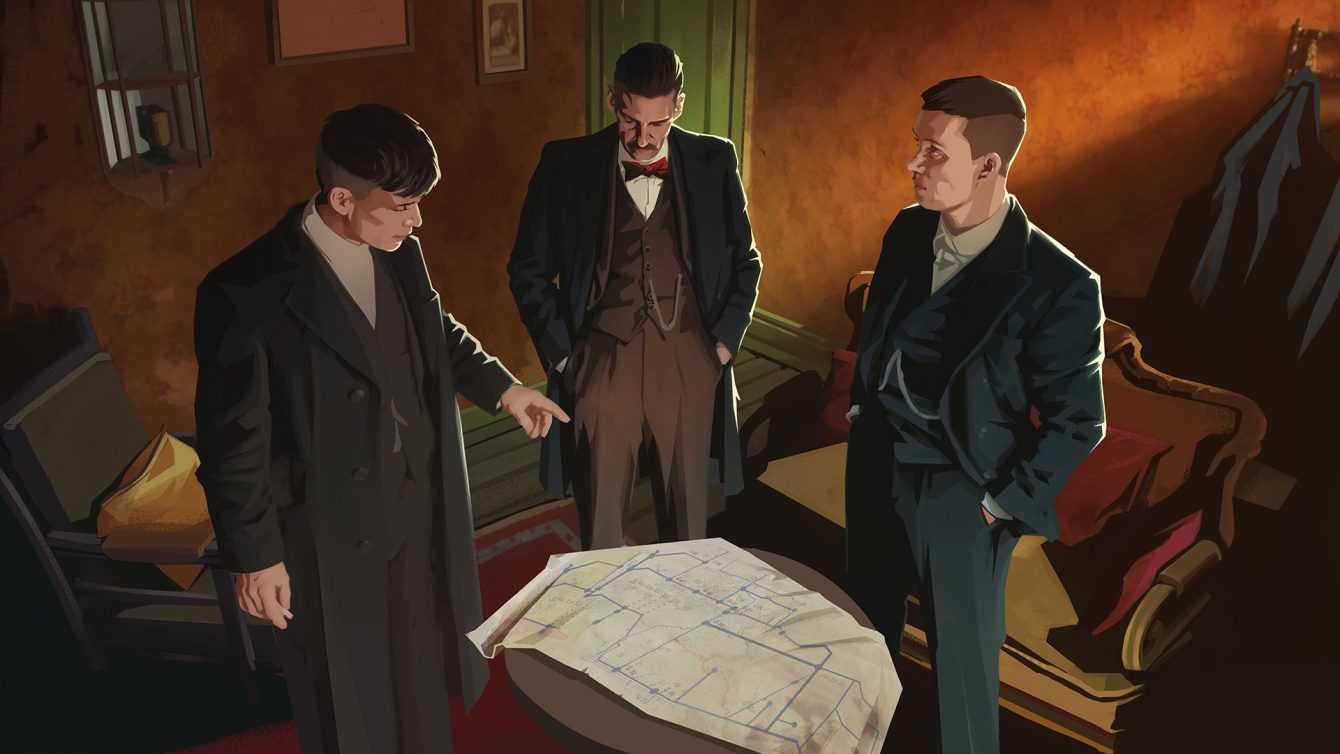 Peaky Blinders Mastermind, sviluppato da FuturLab and distributed by Curve Digital, looks like a simple title but with several arrows in its bow. The game includes in total 10 levels of increasing difficulty, which will engage the players more or less according to their “logical” abilities. The game indeed is a puzzle game naked and raw enriched with some decidedly innovative mechanics, which will put the users’ strategic skills to the test.

Approaching Peaky Blinders, it is immediately clear that the “Mastermind” referred to in the title refers to Tommy’s ability to coordinate the activities of the Shelby family. As already mentioned, the game immediately presents itself as a puzzle game isometric oriented to engage the players with games of logic and puzzles based mainly on the use of the “time”. In the game we will mainly play the role of Tommy with the possibility, however, to jump from one character to another to overcome the puzzles in question, thanks to the exclusive skills of various family members. 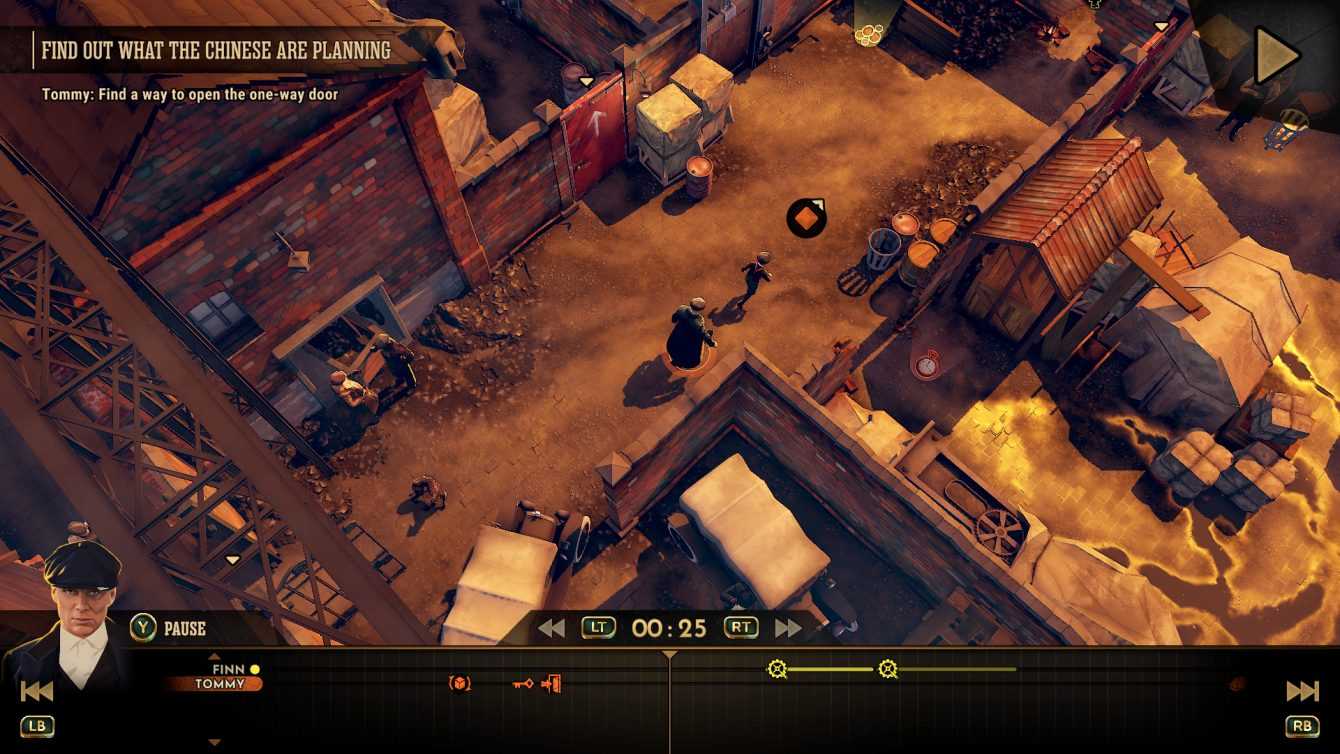 As we said, the game has some particular dynamics (actually quite interesting) aimed at solving the puzzles that will be proposed to us. First of all, time management of the game. The main purpose in Peaky Blinders Mastermind is to solve the 10 levels that make up the game, in the shortest possible time. Based on the time taken, you will get medals (gold, silver or bronze) which represent the only reward available in the game. To complete the missions in the shortest possible time, therefore, it will be necessary to weigh every move and plan to the thousandth interactions between the various characters.

The fundamental gameplay component to achieve the goal is the time timeline. This timeline, positioned at the bottom along the entire length of the screen, will keep track of the various activities carried out in the course of the level. Without going into too much detail of the mechanics, this timeline is rewind or dissolve at will and constitutes the only real “condition” to proceed in the game. The activities of the different characters are written, one by one, on the timeline in question. This means that if playing with Tommy we need to open an inaccessible door, we will have to sneak in with Finn, keep the door open, go back in time on the timeline and walk through the door with Tommy before it closes behind us.

We understand that describing this mechanic in words can be slightly confusing, but we assure you that this mechanism is in-game it is handled really well. This, paired with the quick switch between characters, dictates the pace of the game and sets up 90% of the experience, making Mastermind a really fun and well thought out puzzle game. Besides, the Shelby family is super cool, so … 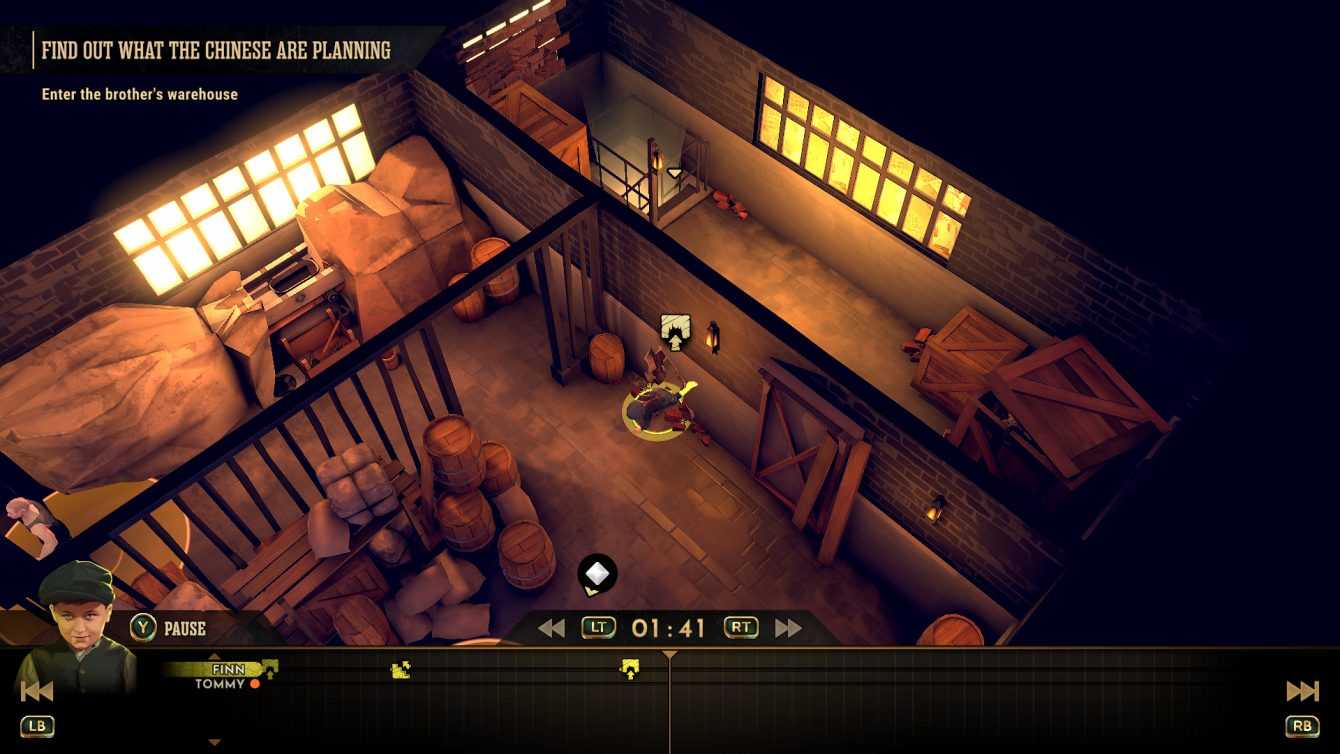 As already mentioned, the other main component of the game, in addition to the management of the timeline, is the quick switch between characters. Although the adventure is mainly based on the events of Tommy, just like in the TV series our protagonist will be engaged in “manipulating” the remaining members of the family to achieve his mere purposes. The whole structure of the game is based on reaching a point B, starting from a point A, overcoming obstacles. To overcome the obstacles in question it will be necessary to rely on abilities of Ada, Arthur, Finn and the other members by the Peaky Blinders.

If Tommy is going to go unnoticed, we’ll have to distract the guards with Ada’s… er… “skills”. If a hole is too narrow for the adults of the game, we will have to use Finn’s slim size (still a child here) to reach the point in question, and so on. This, coupled with the timeline shuffling, will be the main weapon available to players, who will have to work hard to get to the end of the proposed levels.

The whole is surrounded by a simple but functional isometric view, with a useful function of moving the camera, oriented to the analysis of levels and strategic planning of the moves. Despite the technical sector is not phenomenal, both Birmingham and the characters are rendered pretty good. The selection of the ost fully captures the mood British-gangster of the series, and the artworks would also look great as desktop wallpapers. The only flaw (not compromising) the dialogues, overlay only and not dubbed. 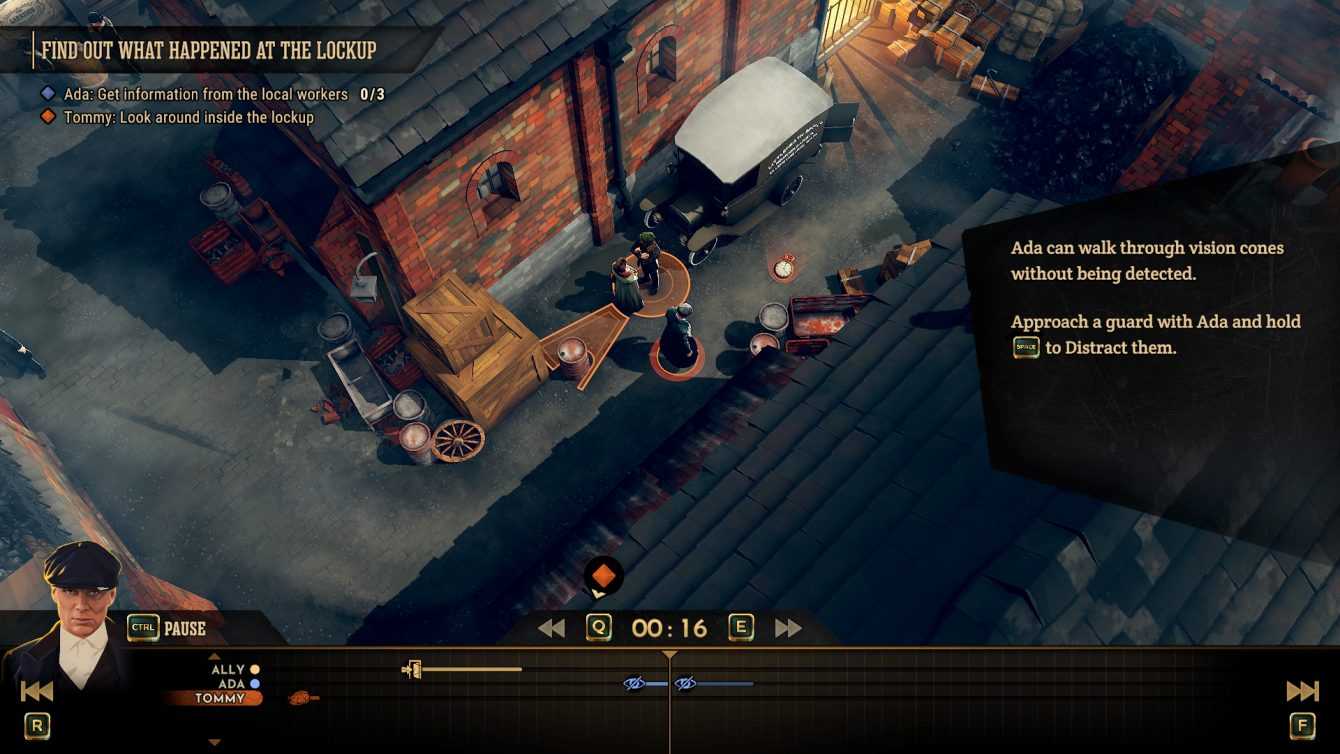 You can change what you do, but not what you want

From what we have seen in preview, Peaky Blinders Mastermind looks exactly like what it should be at the release: a puzzle game without big pretensions, which makes its strengths the fact that it is based on a very successful TV series, and on mechanics already seen but revisited really brilliantly. The central mechanic “timeline + character switch” looks like work really well especially inserted in a game that is not very long-lived, therefore free from the risk of getting bored or being unnecessarily complicated. The technical sector could be better (as well as the meager reward system), but we are satisfied with the artwork and the good choice of music.

Sweet at the bottom, freedom of action granted by the camera allows you to plan every single move and save precious time. We still don’t know what the price of the game will be at launch, but if Curve Digital can play its cards well Peaky Blinders Mastermind has all the credentials to achieve good success, especially among fans of the series. The game will be available in summer 2020 for PlayStation 4, Xbox One, Microsoft Windows e Nintendo Switch.

Well friends, this was our exclusive preview of Peaky Blinders Mastermind! If you are curious to know more about the game, stay tuned on TechGameWorld.com waiting for our review. In the meantime, feel free to check the site for numerous other reviews, previews, guides and more from the world of video games. Hello!