Let’s analyze together, in this more than verbose review, Pecaminosa – A Pixel Noir Game, an independent product by Cereal Games that has recently arrived on physical and digital shelves

The independent video game industry has often relied on the “Atmosphere”. Being, with some exceptions, very lacking in budget, indie titles take refuge in knowing how to tell stories, events, facts and characters in order to make them, as far as possible, unforgettable. Just think of Gris or Celeste, The Witness or Little Nightmares to realize that you don’t need astronomical figures to tell a story. So why, all too often, do we find ourselves faced with securities that fail to leave any imprint and that, on the contrary, are partial failures? Why do we often find ourselves in front of video games like Pecaminosa – a Pixel Noir Game?

The title was developed by Cereal Games, a small Portuguese industry that has no other titles behind it to list, and aims to recreate the atmosphere of the 1950s film noir, complete with a plot that mixes the detective with supernatural elements. “Mix” is a term that we will use often, in this review of Pecaminosa, given the almost spasmodic attempt to generate interest in the gamer by adding many, too many pieces, which, however, have not managed to blend with each other. Let’s proceed step by step, and see why, on balance, we were disappointed.

John Souza is the classic (now) ex-detective with a shady past, a sin to atone and a list of enemies who want him dead practically endless. John Souza is our excuse to experience the town of Pecaminosa, which strangely is not Chicago, a place of perdition made up of prostitutes, gangsters, drug dealers, house rats (and not only) and a decadence by now inherent to the very being of the place. John Souza finds himself, one day like many others, after yet another bottle of Whiskie, in front of Charlie “Two Angels”, a well-known wanted criminal, who entrusts him with an important task and from which he cannot escape. All right so far, except that technically John killed Charlie some time ago.

From this faint premise starts a narrative at times confusing, at times too sharp, which has brought us forward for the 3 total acts of which the title is composed. Although initially we would have expected to find ourselves in front of a detective adventure, as the game continues Pecaminosa strangely takes the path of the supernatural and the esoteric, moving away from the one in which the boys of Cereal Games had succeeded perfectly: the investigative adventure. Let’s say that once we are faced with demons and similar creatures, interest in John’s story drops dramatically. 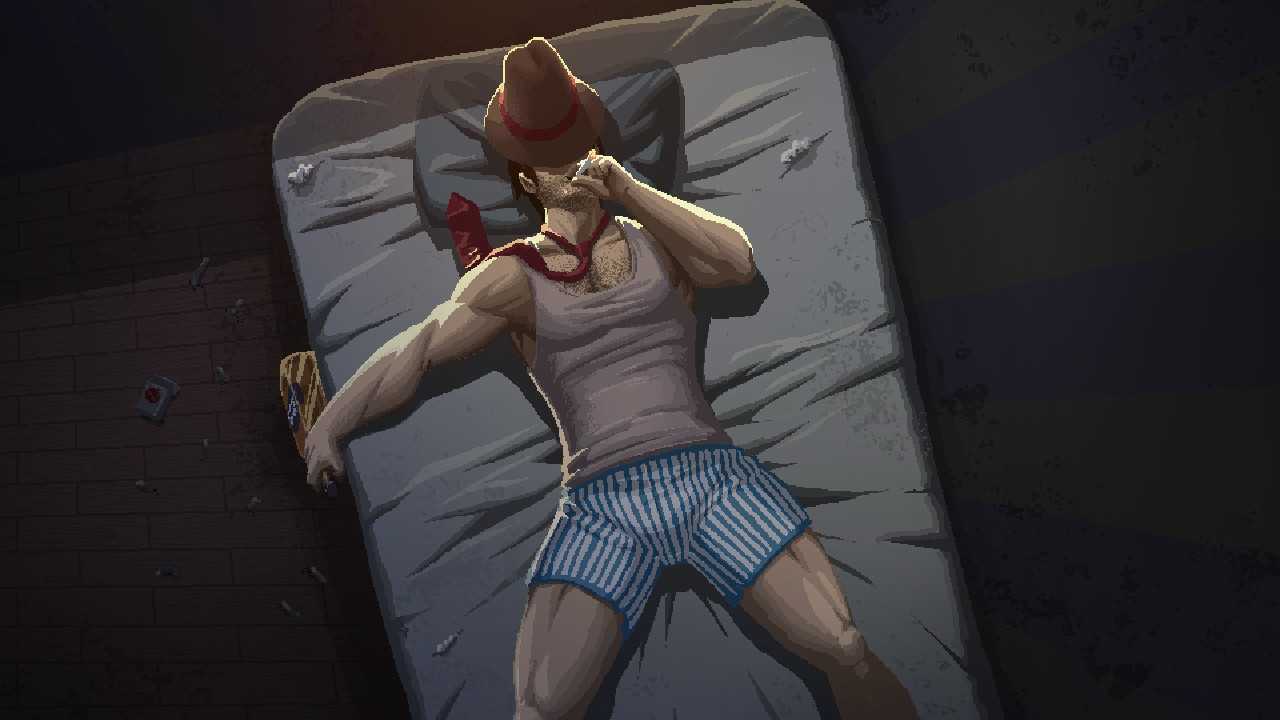 What is happening? | Pecaminosa Review – A Pixel Noir Game

Furthermore, the escalation towards the supernatural element is the most confused and casual it has been seen. If initially the requests made by the various NPCs for the continuation of the plot are simple and congruence with reality, with the progress of the game they will gradually become more and more bizarre, abstruse and misleading. If initially, therefore, Cereal Games had managed to conquer us with the (albeit feeble) narrative line of John’s story, in the end we found ourselves living the game as if it were a Doom qualsiasi in 2D e 32 bit. With the aggravating circumstance that playing Pecaminosa is not at all pleasant as with Doom Eternal.

Pecaminosa – A Pixel Noir Game is a twin stick shooter. We can then move John with the left stick of the controller and aim with our weapon using the right and shooting with a dorsal. In titles like these, the viewfinder and the space management. Two factors that, if not done correctly, generate an inhuman confusion especially if the title you are playing also has bullet hell elements. And guess what? 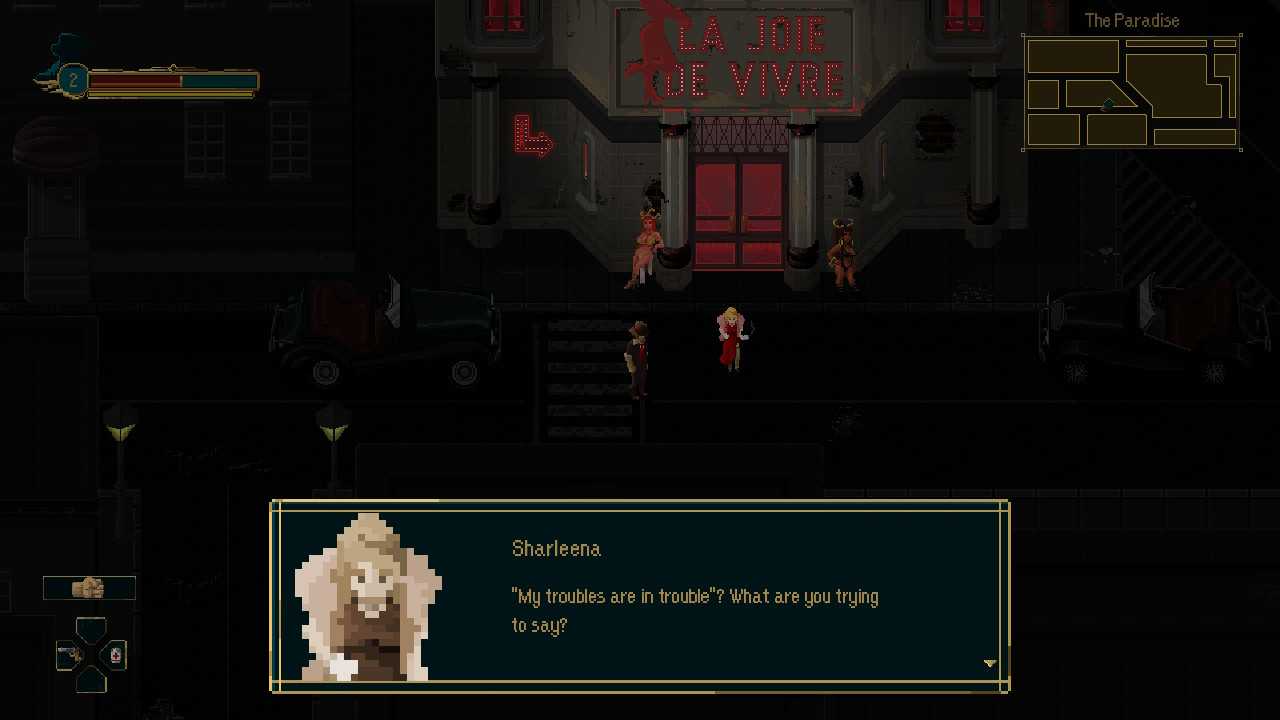 What a mess…! | Pecaminosa Review – A Pixel Noir Game

The title of Cereal Games is terribly confusing from the early stages of the game, when we will have no other weapon than John’s fists. The viewfinder, especially, will be completely useless as it will only give an idea of ​​the direction of the blow, but not of its point of arrival. The final marker of the firing line, in fact, will never correspond to the point of arrival of the fired bullet and we cannot understand such a decision. We then add that, on Nintendo Switch, the game in portable mode is difficult to read due to the small screen size and we often found ourselves sprinting and dodging in random directions trying to dodge invisible bullets.

John is able to equip, in addition to his fists, a firearm from the arsenal that we will unlock as we continue with the story. From the pistol to the shotgun, passing through the submachine gun, the feeling of the guns is rather sloppy and, apart from the rate of fire, we did not notice any particular differences. The feedback of the shots both in and out is also terrible: you will never understand whether you have actually hit an enemy (except by looking at the life bar which slowly goes down) or if John has been hit. A situation that becomes even more embarrassing in the boss fights that, especially in the final stages of the game, will become completely random and deadly … for the wrong reasons. 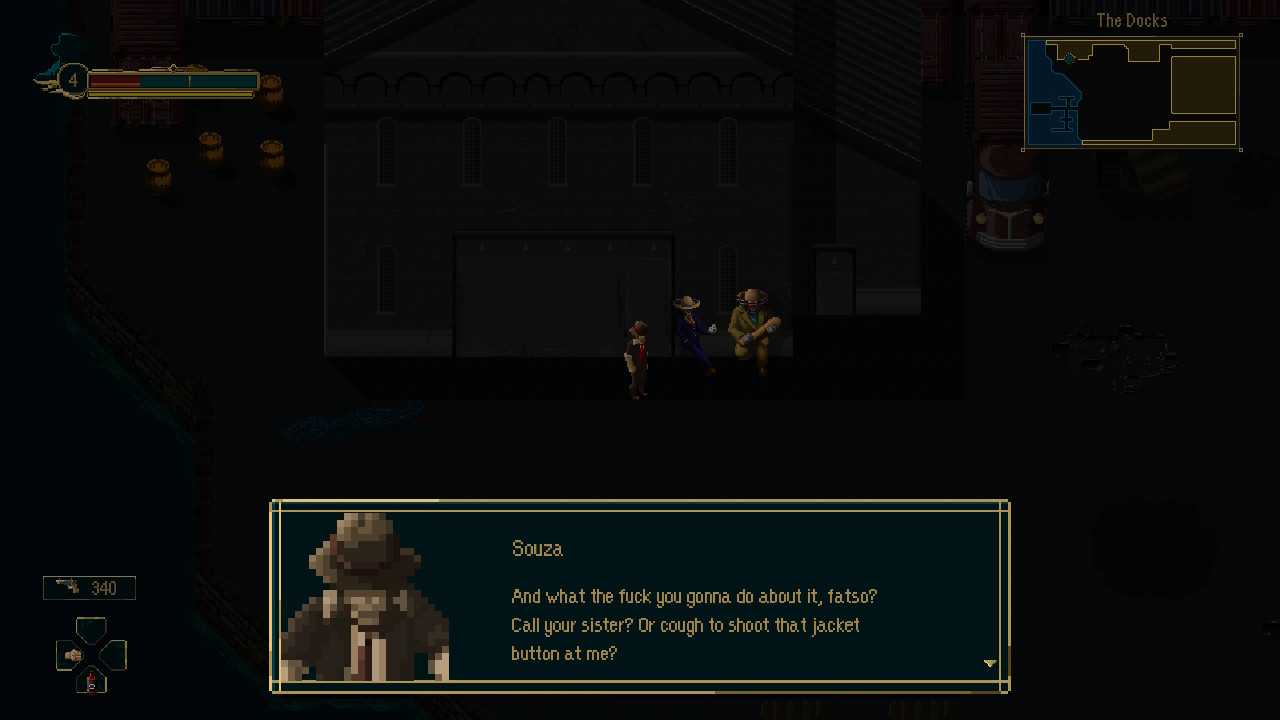 Another interesting element mixed in Pecaminosa, but poorly exploited, is the possibility of upgrading John with the skill points earned by leveling up in a system called L.I.F.E. Luck, Intelligence, Force ed Endurance are the four characteristics we can focus on. Luck increases the drop of enemies and garbage bags scattered around the city, Intelligence unlocks more dialogue options with NPCs, Force increases the maximum hit points and Endurance the Stamina bar. Although it may seem a balanced and interesting system, the first two features are practically useless.

To see improvements under the drop front we will have to take Luck to very high levels and the options unlocked with Intelligence are alternate versions of other dialogue lines already available and which will not lead to variations in the story. As often happens, then, you will find yourself ad indiscriminately increase Endurance and Force, to make John a war machine and not have problems with casual boss fights. 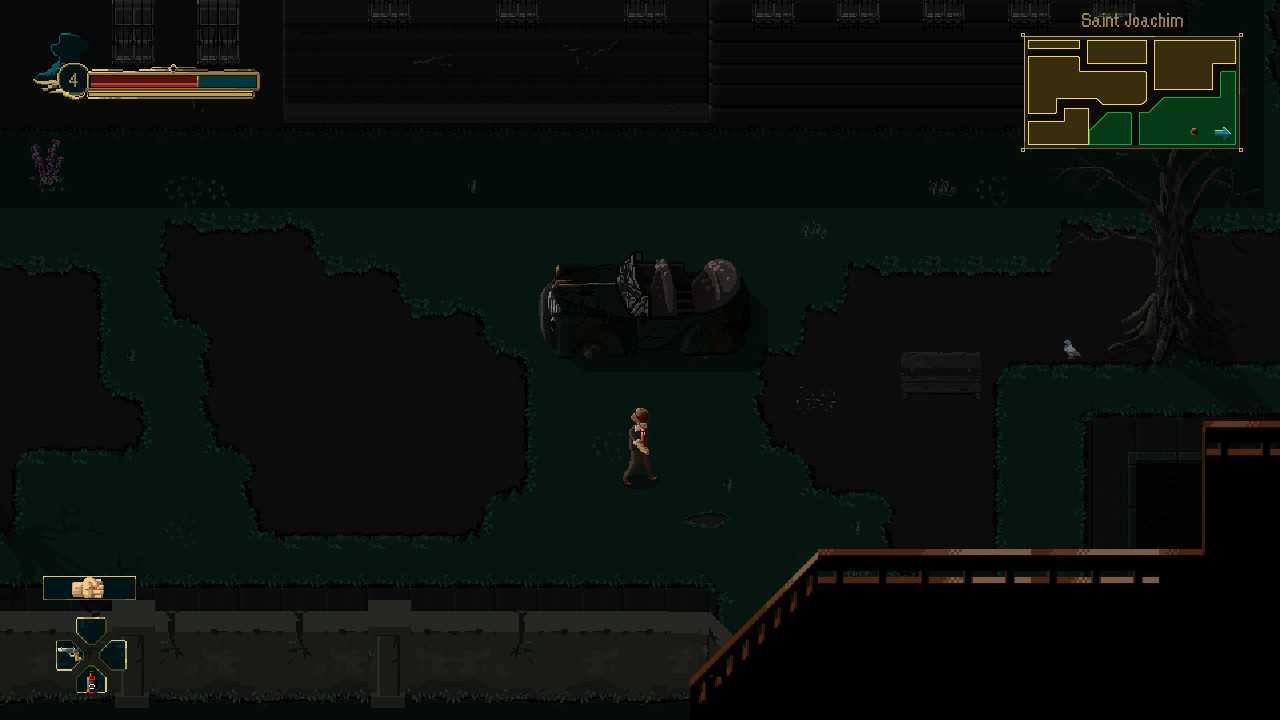 … How nice though! – Pecaminosa Review – A Pixel Noir Game

Finally, the city. Completely empty, bare and without any particular feeling. Considering then that John has a rather relaxed walk, without the possibility of running and shooting (except for those three or four shots given by the consumption of stamina), the walks through the various areas of the maps were slow and interminable, thus breaking the already loose rhythm of the narration. Adding to us that there are no secondary missions, that the only minigame available is blackjack and that the NPCs will always repeat the exact same sentence, you will understand that drawing conclusions on Pecaminosa in this review is not difficult, however sorry it may be.

What saves Pecaminosa is undoubtedly the artistic sector. The city, albeit unfortunately empty, gives off a really interesting Noir and decadent atmosphere. The completely Jazz soundtrack that acts as a background stimulates even more the palate of lovers of the genre. Unfortunately, however, mere aesthetics are not enough to revive a title that has wanted to do too much, without tightening anything in the end. 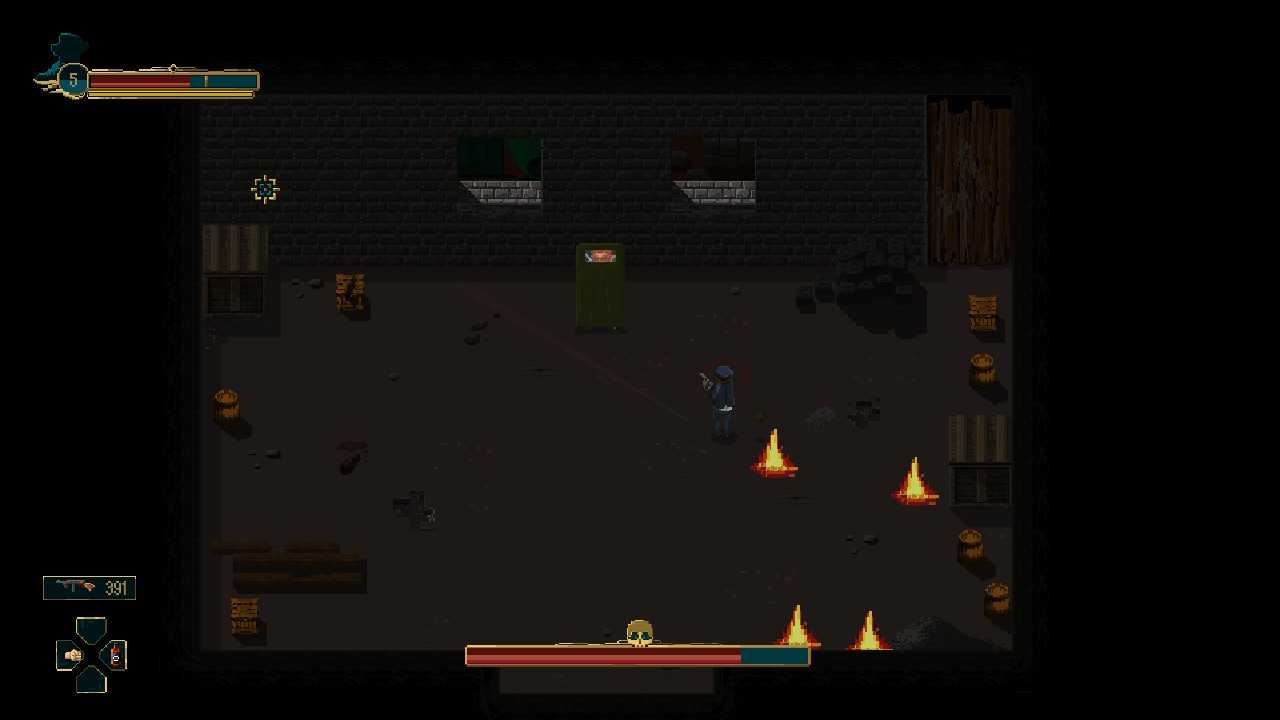 Concluding this review of Pecaminosa – A Pixel Noir Game, we are with great regret to reject it in almost the entirety of the experience. A fascinating aesthetic seasoned by the Jazz Noir atmosphere soundtrack cannot revive the fortunes of a game that wanted to mix too many elements, without being able to excel in just one. The twin stick shooter mechanics are inaccurate, the character progression trivial and obvious and the narrative confusing and rather forgettable. Too bad, really, we hope that the guys at Cereal Games know how to do better with their next title!

Pecaminosa – A Pixel Noir Game is now available on PS4, Xbox One, PC and Nintendo Switch. Stay tuned with us at TechGameWorld.com for all the news, guides and reviews on videogame and tech! And if you are interested in game keys at affordable prices, we recommend that you take a look at the InstantGaming catalog!