The new smartphones Google Pixel 6 e 6 Pro were the protagonists of the Google presentation. These two models mark a great start for Google, in fact they are the first smartphones equipped with the proprietary Tensor chip: during the event we were able to fully understand the potential of the SoC that takes the user experience to another level.

All the news of the Google presentation

The presentation opened with a video starring the new Pixel family, and then moved into a Google store where the company explained how important it is to always develop new cutting-edge technologies.

The new Google Pixel 6 are powered by Google Tensor, a company’s proprietary SoC developed over the past few years. Tensor is capable of raising the level of Artificial Intelligence capabilities of smartphones, making the use of cameras and voice recognition smarter. It also improves the safety and security of the device.

The Google Pixel 6 has a revamped camera module, both in design and specs, with more powerful sensors. It features a 6.4 “FHD + 90Hz screen from which you can enjoy the new Material You UI based on Android 12. The battery of this smartphone is 4614 mAh and the device is equipped with 12GB of RAM and 128GB of internal memory. . Rick Osterloh during the presentation immediately stated that Pixel 6 will be available from today to $ 599. It will be available in Stormy Black, Sortal Seafoam and Kinda Coral colors.

Pixel 6 Pro starts from 899 dollars, it features a larger 6.7 ”120Hz screen and is equipped with 12GB of RAM, 128GB or 256GB of internal memory and a 5003mAh battery. It will be available in Cloudy White, Stormy Black and a golden color called Sorta Sunny.

Both smartphones are water resistant, thanks to the IP68 certification, are equipped with a Gorilla Grass Victus glass and have a fingerprint sensor under the screen. In addition, the phones are made of recyclable aluminum, to respect the environment.

Material You, the new Google interface 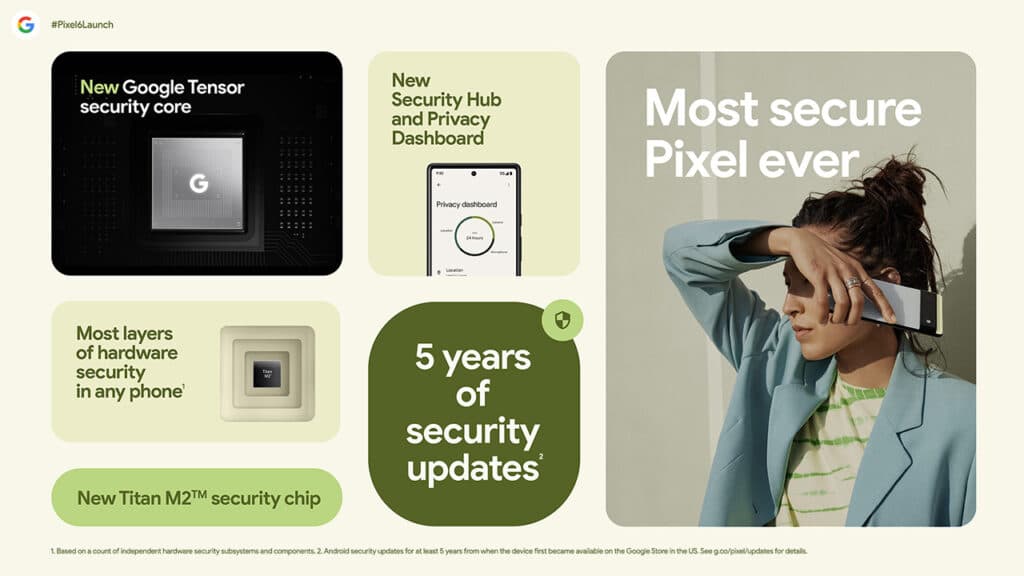 It’s time to talk about Android 12 and the new interface Material You: Includes wallpaper that fits the look of your smartphone. This means that the main colors of the interface will change. The Summary screen also shows the information you need. This includes, as the company has shown, statistics on training in progress or boarding pass for an upcoming flight. Widgets also play a central role in the Android 12 interface.

Google has also talked at length about privacy, which the company has worked deeply on with the Tensor chip. The chip Titan M2 takes care of security, along with a core in Tensor, which protects user data. It will also be possible to have a clearer idea of ​​what permissions the various applications have. For example, you will understand at a glance which applications access the microphone or camera. 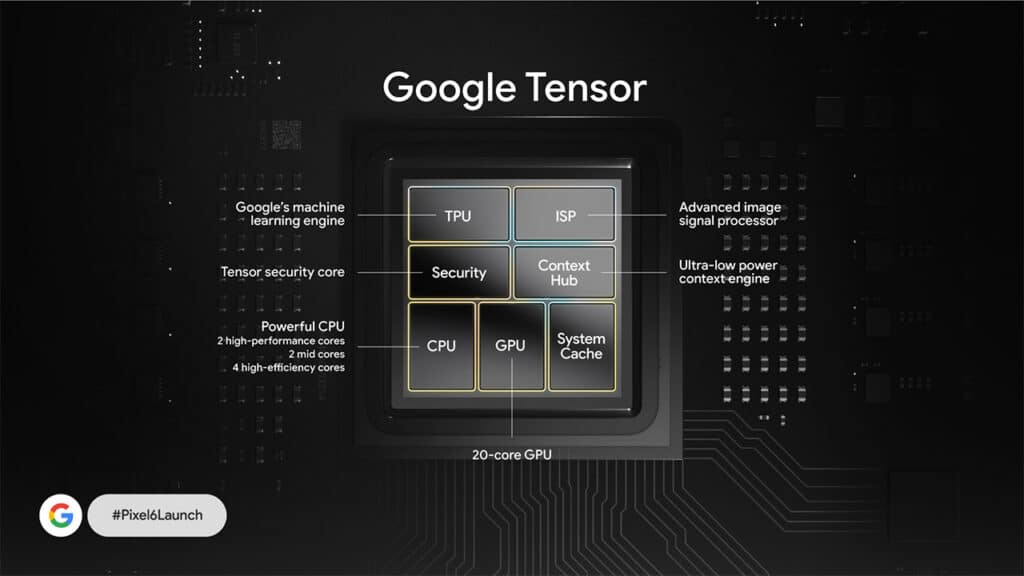 Google has chosen to equip the new smartphones with a proprietary SoC as current mobile chips are not yet able to keep up with Google’s experience in machine learning. Tensor allows new smartphones to be 80% faster than the Pixel 5 in CPU performance, and 370% in GPU performance. The SoC Tensor offers one 20-core GPU and an 8-core CPU.

Google Tensor makes many actions possible, for example by improving the dictation of text messages. Now it recognizes punctuation and extracts information from the Contacts app to mention the right people in a message. The Pixel now also recognizes the “Delete” and “Send” commands without being written as text in the message.

Another feature mentioned by Google is Live Translate: real-time translation happens on the device, thanks to Tensor, in a faster and more accurate way. The Pixel 6 in practice is able to act as an interpreter, managing to translate the text framed with the camera.

The cameras of the new Pixel 6 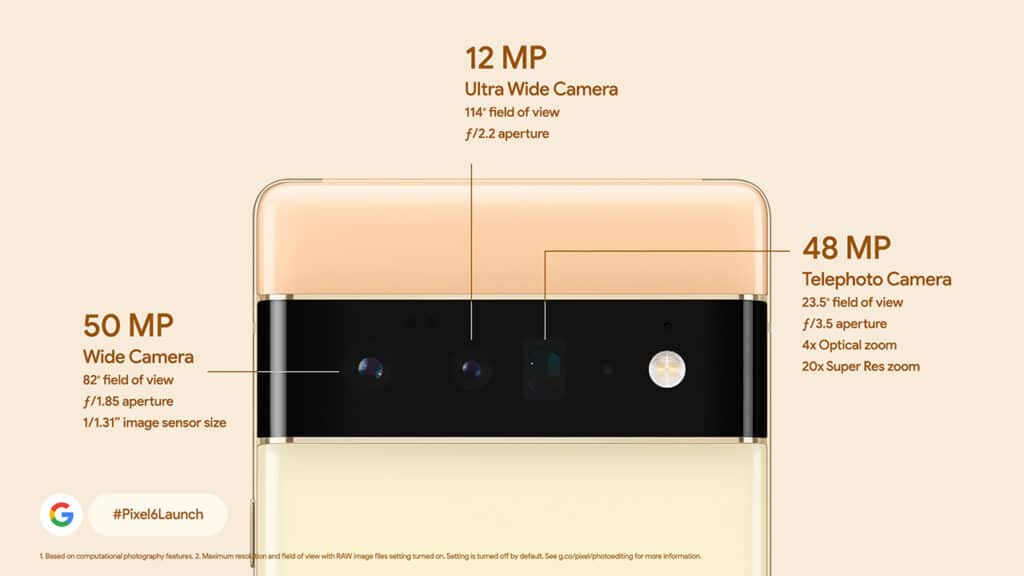 The new Pixel 6 and Pixel 6 Pro are equipped with a 50MP main sensor, which captures 2.5 times more light than the Pixel 5. Both smartphones also come with a fotocamera ultrawide da 12MP, while the Pro model has a 48MP telephoto lens with 4x zoom. This zoom, as Google claims, also works with Night Sight mode for low-light photography. The new Pixel 6 are also capable of recording video 4K con HDRnet+ a 60fps. Obviously, this aspect is also made possible thanks to the SoC Tensor, owner of Google.

The company then talked about some camera modes such as Magic Eraser, which allows you to remove objects or people in the background; or Face Unblur, which uses multiple images taken by different cameras to focus on someone’s face. Motion Mode it is very similar and allows you to take photos in motion, without them being blurred. 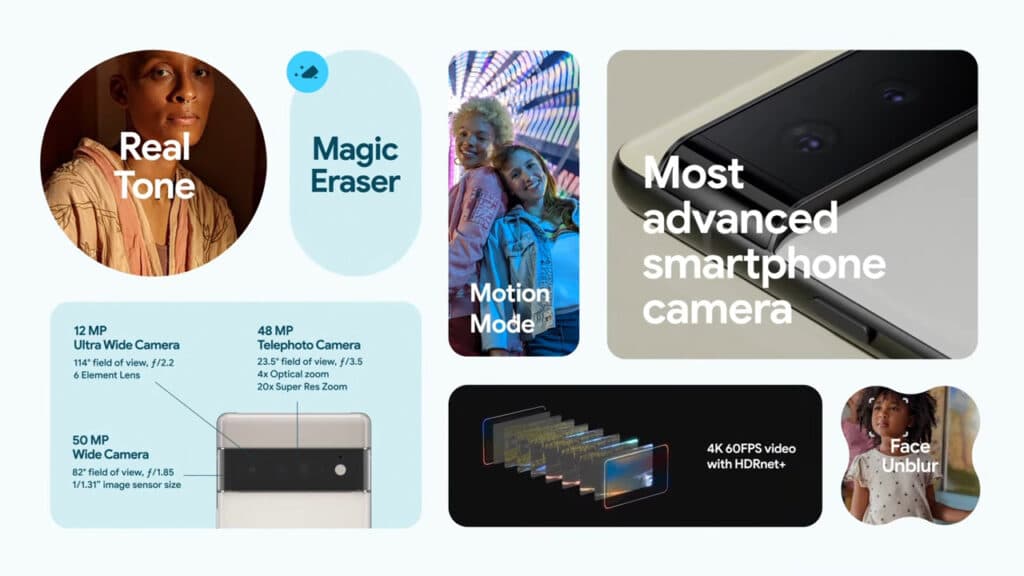 The Quick Tap feature has also been included, which allows you to tap the back of the smartphone to launch the camera quickly. Among the other features of the camera it is important to note Real Tone, which accurately reports skin tones for people of color.

Google Pixel 6 and Pixel 6 Pro, the protagonists of today’s presentation, can be pre-ordered from today starting from 649 euro for the basic model e 899 euros for the Pro. Smartphones will actually be available from October 28. It looks like smartphones will arrive in Italy at the beginning of 2022, so we have to wait a few more months for our market. Bundled with smartphones you will also receive headphones Bose NC 700.