Join to play and split to have an opinion: discover the new MOBA in our review of Pokémon Unite for Nintendo Switch

Before it arrives on mobile, we had to deal in one review the first incarnation of Pokémon Unite, that is the one on Nintendo Switch. Since the release of the Red Version and the Blue Version on Game Boy, the franchise has received numerous treatments, adapting to different genres with varying success. Now, the series comes back in MOBA, or multiplayer online battle arena. To challenge League of Legends on its own turf was a risky bet. Now, the question remains: The Pokémon Company will have bet on Rapidash right?

We can already tell you that there is no absolute answer. Rarely (yes, including Sword and Shield) has the franchise boasted a title so capable of (ironically) dividing public opinion. You won’t find two people online who think the same way about every aspect of the game, but that won’t stop us from summarizing them here. The only thing we can anticipate, however, is that as they say the truth lies somewhere in between … and this, unfortunately, also applies to our judgment on the matter. Given the price it takes to download the game on the console, you might also guess why.

On a narrative level, there is not much to say about Pokémon Unite, but as a matter of practice we will go into as much detail as possible in view of the review of the Nintendo Switch version. Not unlike Pokkén Tournament, also in this case the change in the gameplay (always the fulcrum of every first-party IP) is justified with a change of region. In Pokkén’s case it was the Ferrus region, a wink to fans of Tekken and the Steel Fist Tournament. This time, however, we have an island where you fight in an unusual way, but as always tied only marginally to the “lore” of the Pokémon world.

Alludiamo all’Heos island (according to the eShop, at least; the game is currently in English, so for now it is Aeos), where the “United struggles” are raging. It is about clashes between two teams of five players, in which everyone has their own role. We have already had the opportunity to dissect the basics of the gameplay in a guide, but in principle the conduct of the clashes translates into the struggle for domination of the various areas in which the playing field is divided. As we mentioned in the guide in question, the advice we give you is to follow the tutorials, but the tutorials do not always stop to explain every gameplay mischief. Which is a shame, given how much the game is inadvisable to those who do not have much time to dedicate to it. 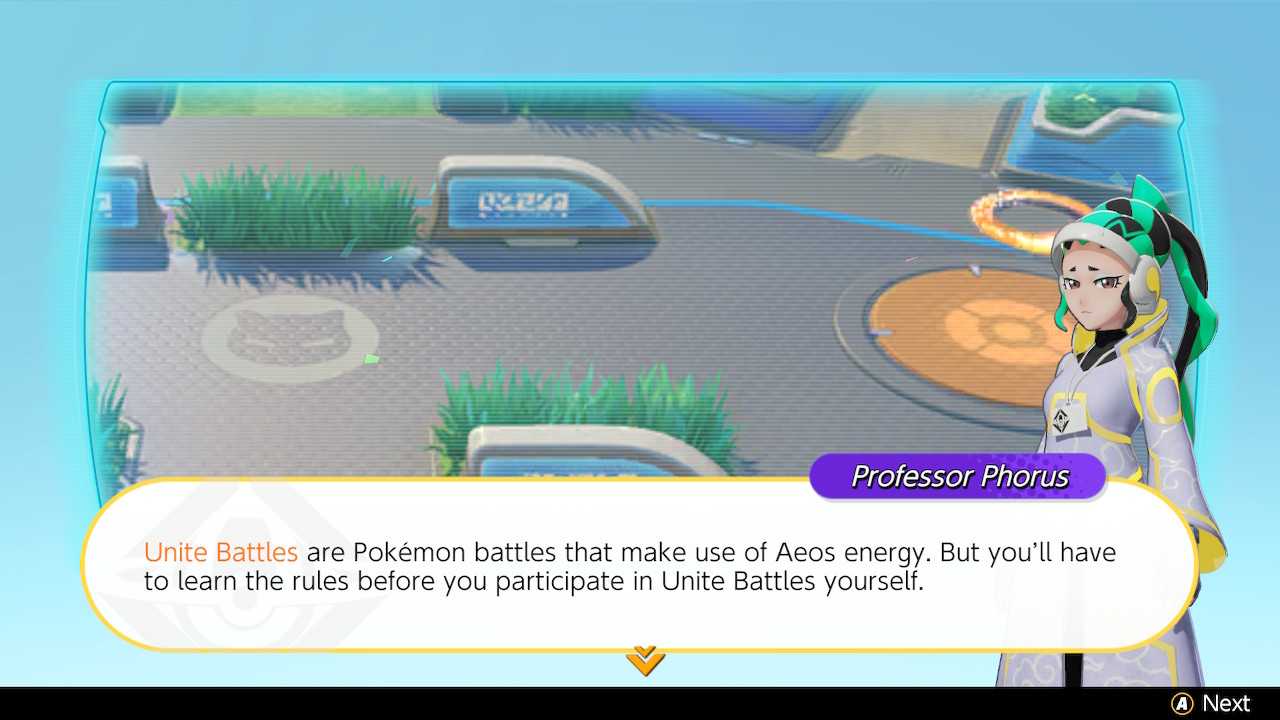 The learning curve of Pokémon Unite, under review, despite the presence of other exponents of the genre on Nintendo Switch does not require familiarity with MOBAs. From the very first moments of the game, the title is not slow to dispense the basics through (who else?) The iconic face of the franchise, Pikachu. The ease of understanding the rudiments does not justify the decision to gloss over some optional but vital tips for those who want to compete. One example above all are the open zones, where players can score points simply by pressing and holding a button. This is only the first of many aspects that can mark a gap between us and our opponents.

The clashes see ten players face off in clashes between two teams, as we have anticipated. Pokémon Unite’s default map, Remoat Stadium, sees 10-minute fights unfold on three different routes: the one at the top, the one in the middle and the one at the bottom. Teams will need to gain experience, level up and (eventually) evolve in real time by battling wild Pokémon and defeating opponents to gain control of the map, as well as score points. The “net”, in this sense, is located at the top and bottom of the arena, while the center is reserved for wild Pokémon (and a Zapdos, when there are two minutes left in a match). 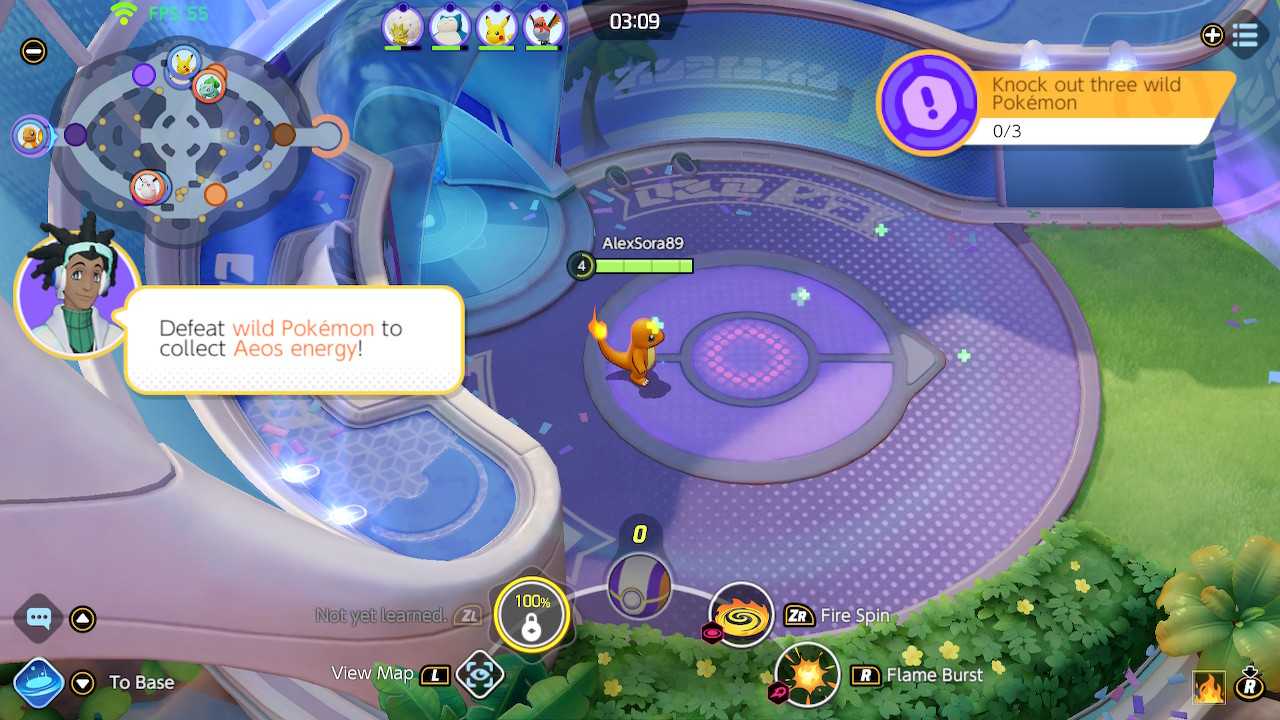 Take Me Away Strategy – Pokémon Unite Review for Nintendo Switch

The players will have to making decisions constantly in Pokémon Unite about the approach to enemy areas, as we were able to see in the review phase. Scoring points in quick succession and then fleeing and scoring more at the risk of exposure to enemy attacks are both potentially valid strategies. The day one roster consists of 20 of the creatures, with more to come in the future. In that sense, the game is relatively generous with the characters from the beginning: daily login and completing missions allow you to earn Aeos coins, with which to buy characters.

Each Pokémon is divided into two groups for attacks: there are those who hit closely and those from a distance. The former, in principle, enjoy a lot of life points and a high attack power, while the others can inflict a lot of damage as long as they keep a safe distance from the opponents. If we want to be more specific, summarizing the guide we have mentioned, we have five small groups. There are sprinters with high mobility, attackers skilled in striking from afar, defenders aiming to protect teammates, support characters who act as healers and balanced fighters. In short, there is something for everyone. 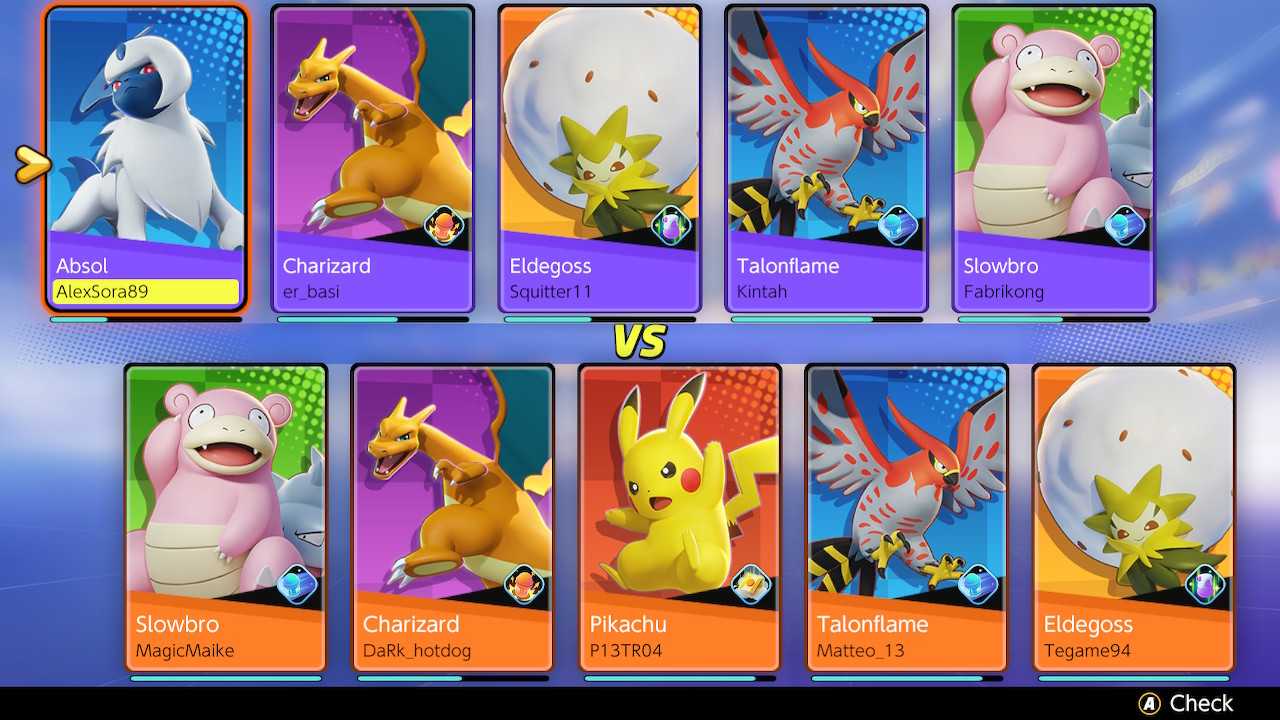 Some of the Pokémon available in Unite can unleash enhanced attacks that are capable of special effects, but which also have cooldowns. To learn them, however, it is necessary reach a certain level in each match, although it is possible to decide which of these moves to start the game with. It will be up to the player to base a strategy on their style of play; in that sense, there is some room for maneuver. Defeating Pokémon in the wild and those of opponents provides players with the Aeos energy needed to score points in enemy areas, and depending on the character they can also vary.

To give some examples, Lillipup and Aipom give two energy points each, while up to five can be obtained by defeating an Audino. This is never a direct line to the area to be conquered, especially when there are stronger Pokémon like Drednaw, Rotom, and Zapdos that benefit the entire team. There cooperation, here, it will be vital, especially in the modalities that will gradually be unlocked. The ranked mode will have to be unlocked at manager level 6 with different conditions, while the others have very specific accessibility requirements. 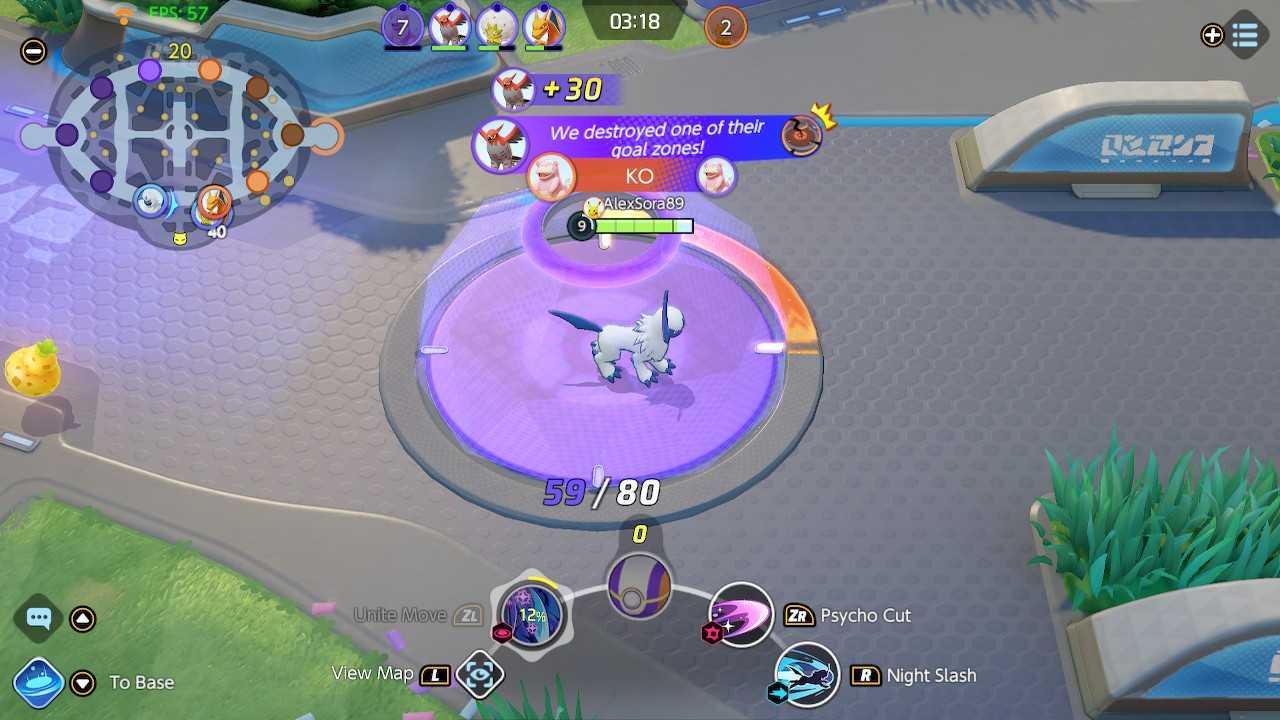 Such requirements, in Pokémon Unite lingo, are called licenses: The game also dispenses with it easily, but it may be easier for non-paying players to reach level 10 before being able to enter the ranked matches. These last for a season, and based on the rank reached, players will get rewards at the end of the season. This mode can be played with friends as long as the ranks are close enough to be accepted by the game. The games last 10 minutes and in the last two minutes the points obtainable are double, encouraging the most compliant players to come back.

the quick matches instead, they unlock at manager level 9. These are five-minute clashes in which three different maps are cycled. The first is Shiver City, a snowy map for two teams of four. The second is Auroma Park, an arena surrounded by greenery for clashes between two teams of three. Finally we have Mer Stadium, a scale replica of Remoat Stadium for clashes between two teams of four players each. Due to the shorter duration, Quick Matches offer a faster pace for leveling up and evolving your Pokémon. 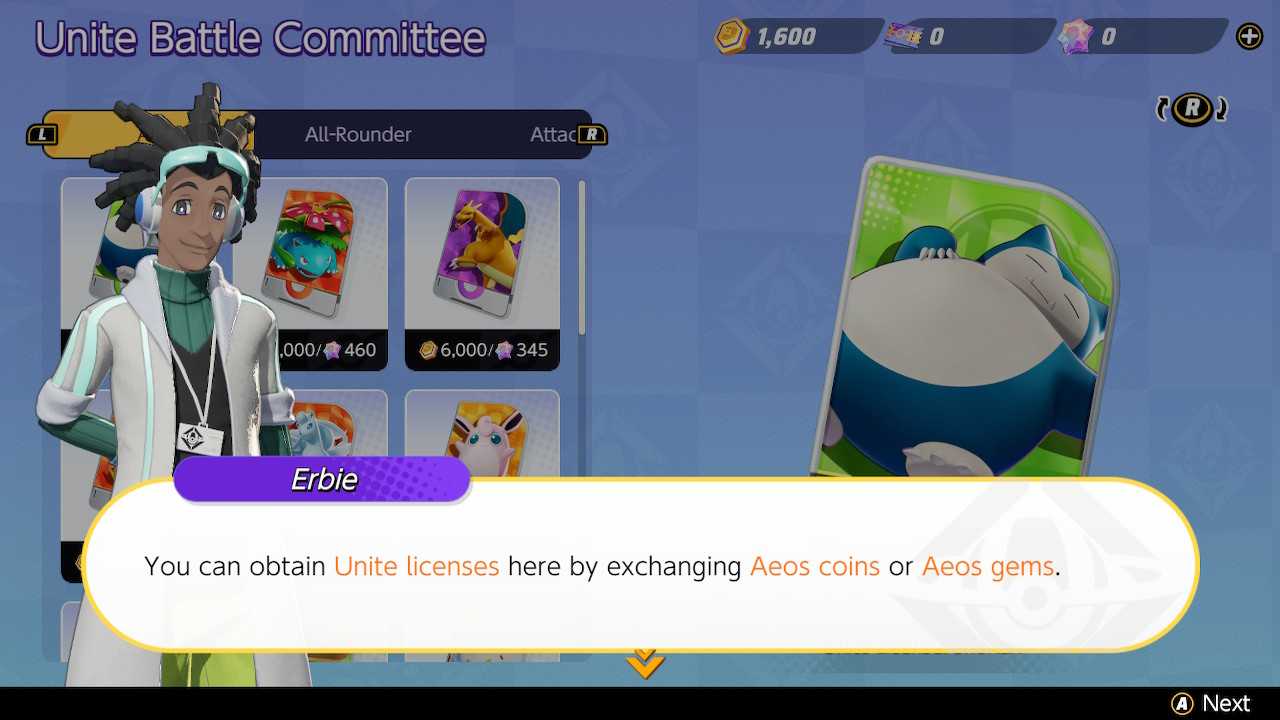 In the review phase, we noticed during our sessions on the Nintendo Switch that, unsurprisingly, evolution is one of the highlights of Pokémon Unite. At some level, characters can learn the very powerful United moves. Evolution amplifies this mechanic, and trying to evolve as quickly as possible can turn the entire game in favor of one of the Pokémon in play as they face off against weaker opponents. There are other aspects as well, such as hiding in the grass to attempt a strategic escape. In short, you will have to plan a lot.

If you know the genre, you will also know that there are many factors with which to benefit. The tools to equip are the answer, but they also mark the first of crepe of this title. For starters, the game doesn’t explain the benefits of the different tools very well, thus leading to potential wastage of Aeos tickets and coins. The tools can level up and be upgraded with Enhancers, which are obtained in the daily and weekend missions. While something can be achieved simply by playing, as it is free-to-play, the “chance” to spend real money on Gems or “Battle Pass” soon comes to gain an advantage and level up these items faster. 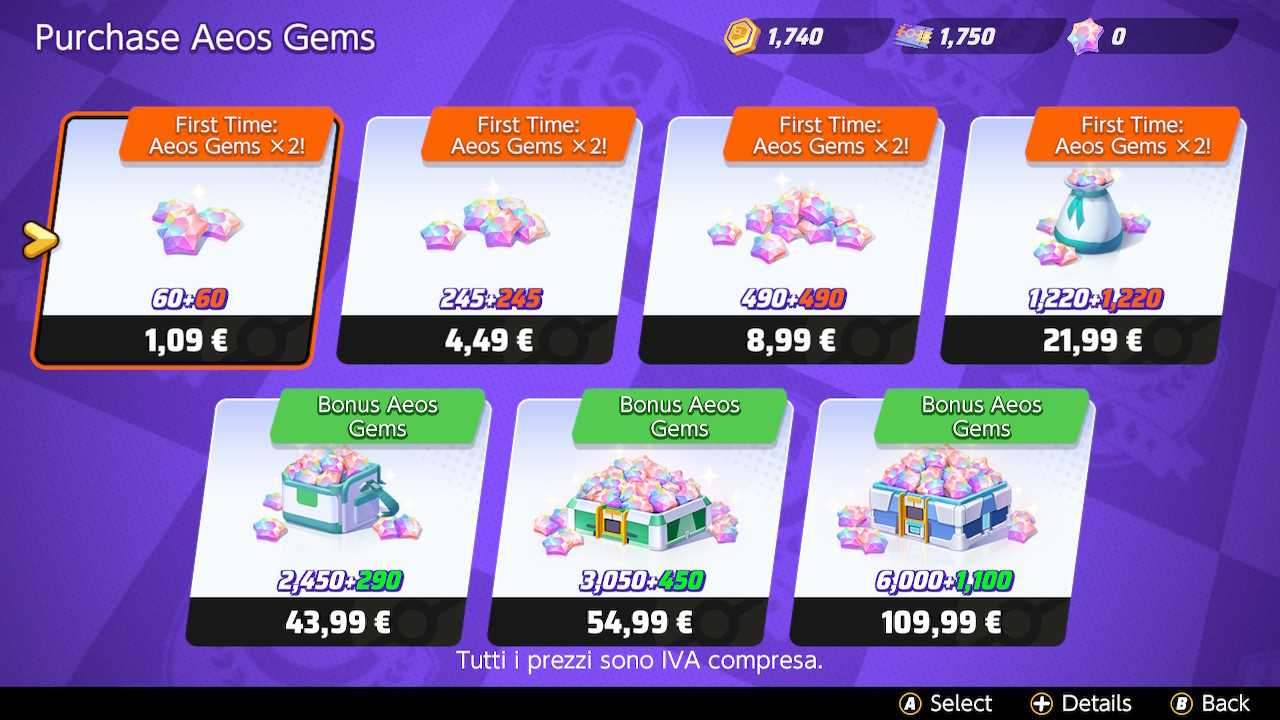 We have hinted so far in our review that Pokémon Unite was a free-to-play title, but unfortunately we have to correct the game: how much we have played on Nintendo Switch, in reality, is a hard and pure pay-to-win. It breaks our hearts to say this, but the gap between who pays and who doesn’t is huge. Players can play for hours in order to maximize the potential of a tool to equip, or spend a hundred dollars at the beginning to be able to immediately buy Item Enhancers along with the characters themselves. The danger of starting at a disadvantage, for non-paying players, is very real.

The inevitable Battle Pass provides cosmetics, additional Item Enhancers for tools, and Aeos Tickets to get useful tools. Such is the nature of the free-to-play model, but to us the impression it gave is that of a coercive mechanism that it precludes the authentic experience for those who do not pay. Opinions can only vary in that sense, especially when facing increasingly strong opponents online. Another flaw, ironically, is how much there is no way to unite players online at a vocal level, also thanks to the rain of notifications which also makes it difficult to keep in touch. You can do this in other ways, but it’s not an ideal solution. 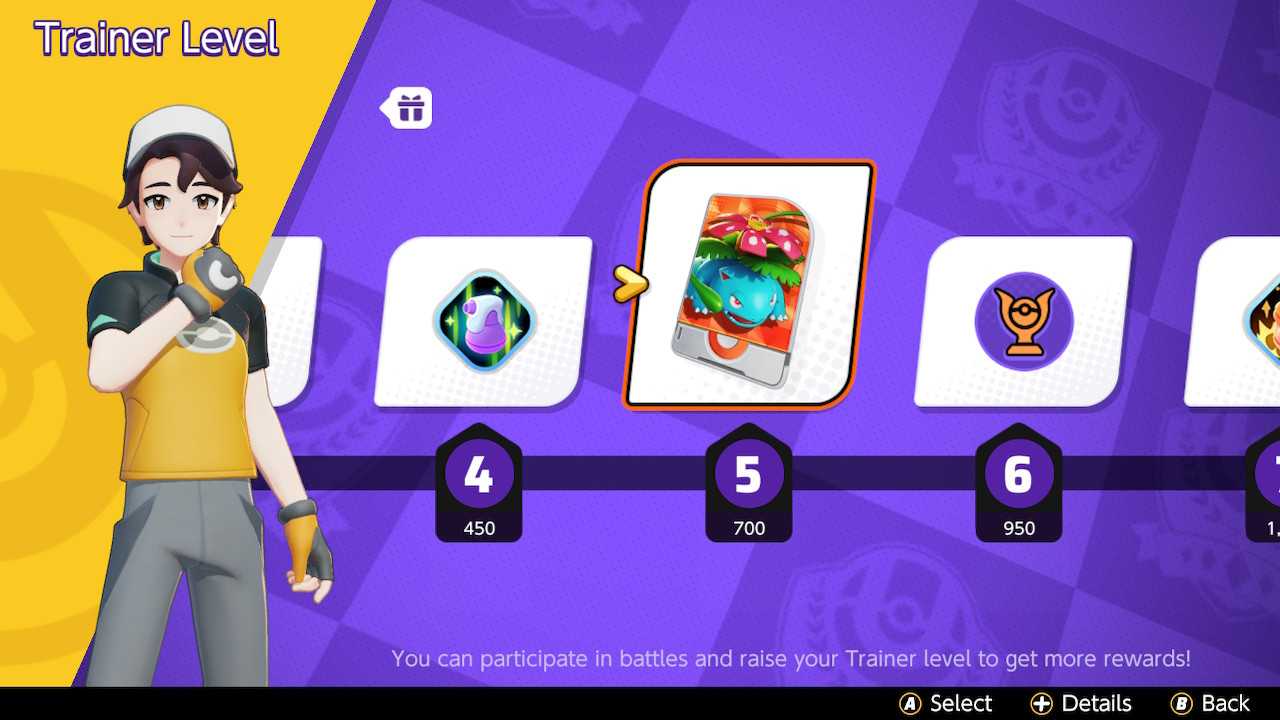 More powerful than a king, he fights (but I wonder) why – Pokémon Unite review for Nintendo Switch

We are in the final stages of the review, and while Zapdos is preening on its status as a “golden snitch” (taking it down makes everything else almost null) it’s time to judge Pokémon Unite from the technical side: how much it exploits the Nintendo Switch hardware ? The result, contributing to the qualitative balance of the game as a whole, is without infamy and without praise. Graphically, the art style of the franchise is always …