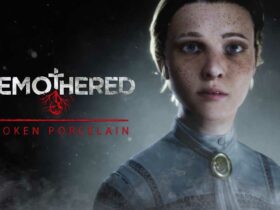 Finally we were able to experience firsthand and preview Hyrule Warriors: the Age of Calamity, the new musou that tells the past of Hyrule

The announcement of Hyrule Warriors: Age of Calamity it took place a short time ago, on 8 September 2020, greeted with considerable amazement, excitement and a hint of concern. Sentiment generated largely by the fact that the main developers of the title do not come from Nintendo, which still offered advice and support, but Koei Tecmo. Famous creators of the Dinasty Warriors series, titles that fluctuate a lot in quality and belonging to the genre musou, not quite widespread in the Western mainstream audience.

However, the developers are not short of knowledge of the series, as they have shown great care and attention to detail in the creation of the previous one. spin-off Hyrule Warriors su WiiU. So approaching the demo of Hyrule Warriors: Age of Calamity for this preview, intrigued us a lot, especially for the narrative weight that it carries and the potential mix di grafica e gameplay con Breath of the Wild.

News on the horizon

As already mentioned, history plays an important role, in fact it has the task of telling the events of 100 years earlier the events of Breath of the Wild. Many shadows were hidden over much of the narrative and before the announcement of this prequel we thought that only the sequel could enlighten us. However, the Age of Calamity seems to introduce some interesting additions, as well as explain some of the most arcane facts in history. So let’s analyze this preview the demo of Hyrule Warriors: Age of Calamity. 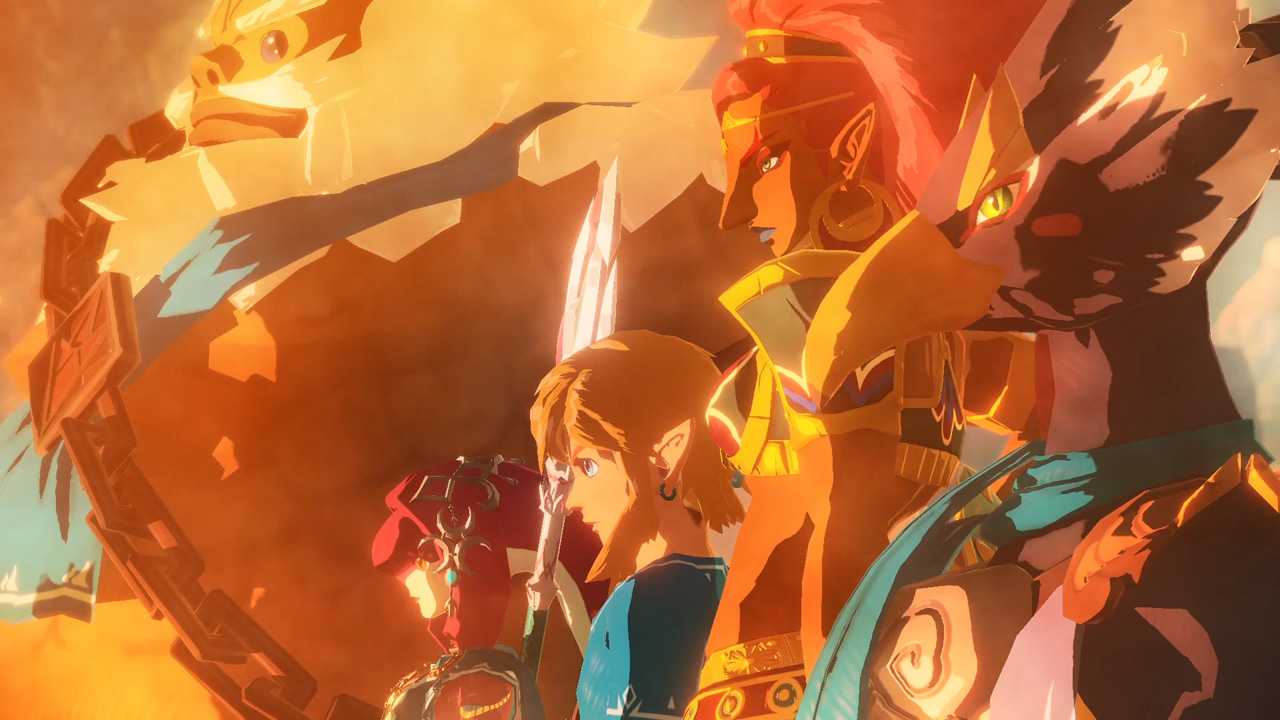 When It All Began – Preview Hyrule Warriors: Age of Calamity

At the beginning of the game Link is still a simple soldier in the great army of the royal family of Hyrule, intent on defending the kingdom from the advance of the forces of Calamity. Battle that will lead him to accidentally meet Impa, Princess Zelda’s trusted advisor, and fortuitously obtain the power of the Sheikah tablet. In that exact moment we also make the acquaintance of a small guardian came from the future who, for some unknown reason, seems to have the power to raise the Sheikah watchtowers.

In this first mission, it’s pretty obvious that Link possesses remarkable sword-wielding abilities, so evident that he promotes him as Princess Zelda’s royal guard. All this is narrated through scenes kinematics in real time, which do not interrupt but fluidly connect the events during the battle. In addition, between one mission and another we will be able to hear the voice of the king of Hyrule tell us about the events not described visually.

However, a sensation that accompanied us in the short test was perhaps that of a high speed in telling the events. Within an hour we passed from the meeting between Link and Impa, at the beginning of the search for the Sacred Colossi. A judgment that we do not want to weigh too much, as we are still talking about a portion of the game that may have suffered cuts for a faster gameplay experience. 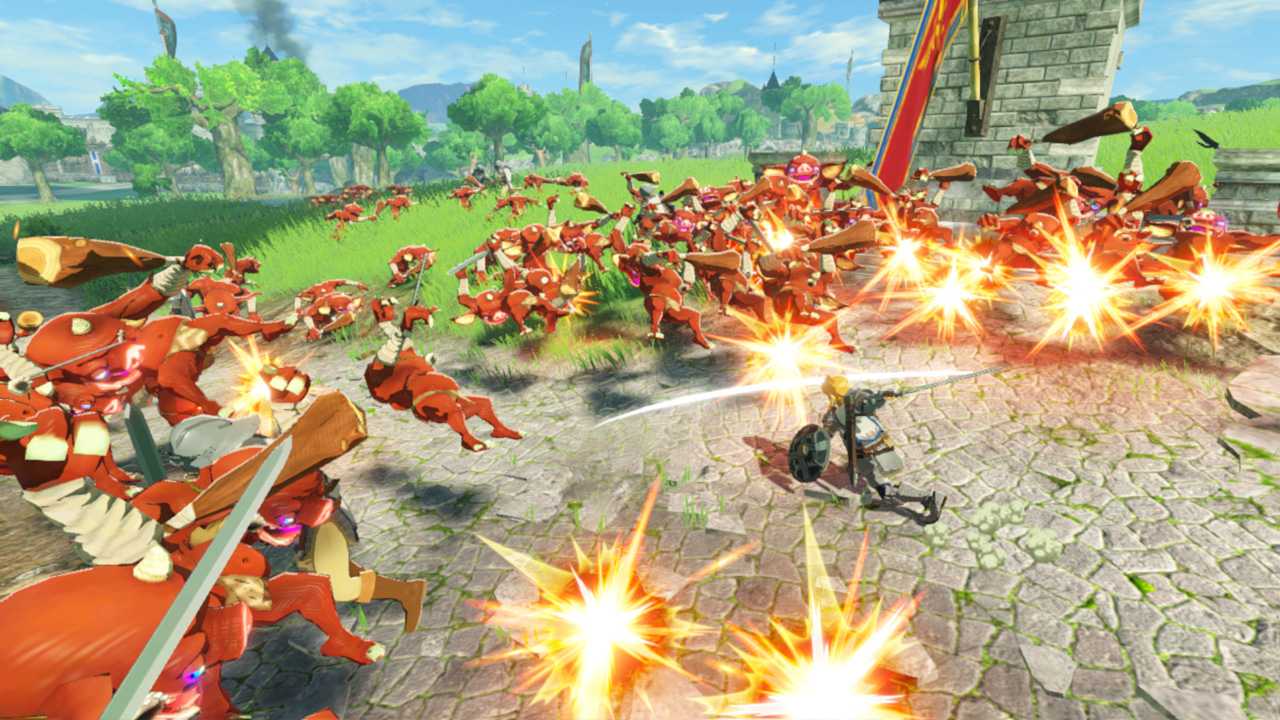 After having recalibrated the brain to accept a gameplay that does not allow us to climb or run freely on the plain of Hyrule, the experience is more than positive. As in a classic musou, we find ourselves ad face large armies of enemies with characters of extraordinary power. Two main and three side missions are available in this demo, each with its own unique gameplay characteristics. In the first we have the task of facing the Bokoblim army being able to make use of Link, or Impa about halfway through the mission. Both are equipped with very fast attacks, making it a real pleasure to knock red enemies away.

With the B key you can dodge, Y is for quick attacks, X for the more powerful ones and with A you will unleash your special ability. The combos are very simple and consist of repeatedly pressing X, Y or both alternately. Samples can’t jump with the simple use of a button, it is in fact necessary to approach a wall and press B twice to do so. 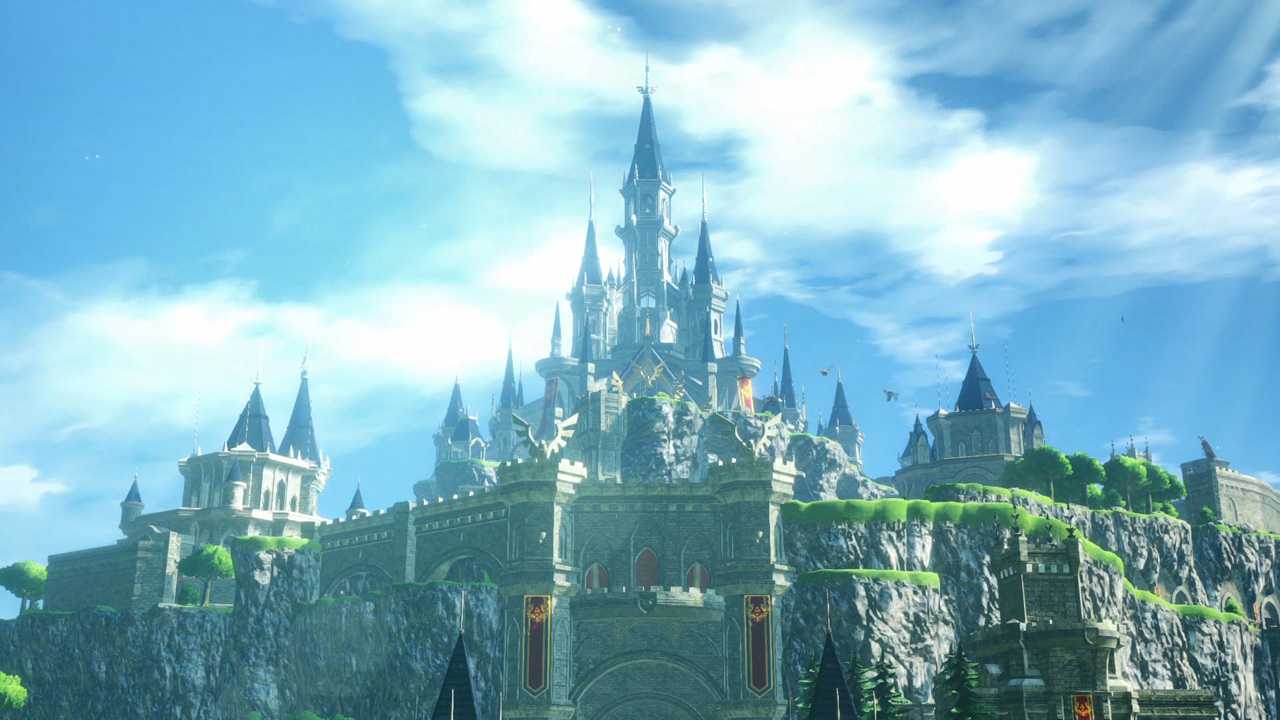 The Return of the Sheikah Tablet – Hyrule Warriors Preview: Age of Calamity

This will make it easier to reach the monsters’ heads and deal critical damage to their stamina. The latter in fact, if reduced to a minimum, opens up the opportunity to press X and unleash a special blow to the enemy’s weak point. Additionally, each character can make use of powers of the Sheikah tablet and in a somewhat personal way. For example Link uses Cryonis to block enemies’ charge or blow up and Zelda uses the same power to drop ice spikes from the sky.

There are three samples available in the demo to use: Link, Impa e Zelda but only if you complete the second mission as well. Each comes with different special abilities and skill-sets. Link attacks with the sword, bow and slide with the shield. Impa is very fast and uses illusory shapes to strike from multiple sides.

Zelda’s abilities are a big surprise, in that can fully exploit the Sheikah tablet also for basic and special attacks, providing an explosive mix: a rolling bomb that we can detonate from a distance, Cryonis creates freezing pillars, Magnesis a mid-range attack, Stasis obviously blocks enemies and much more. Each power has its own peculiarities and, although it often involves having to “spam” the keys with impunity, the fun and variety seem guaranteed for now. 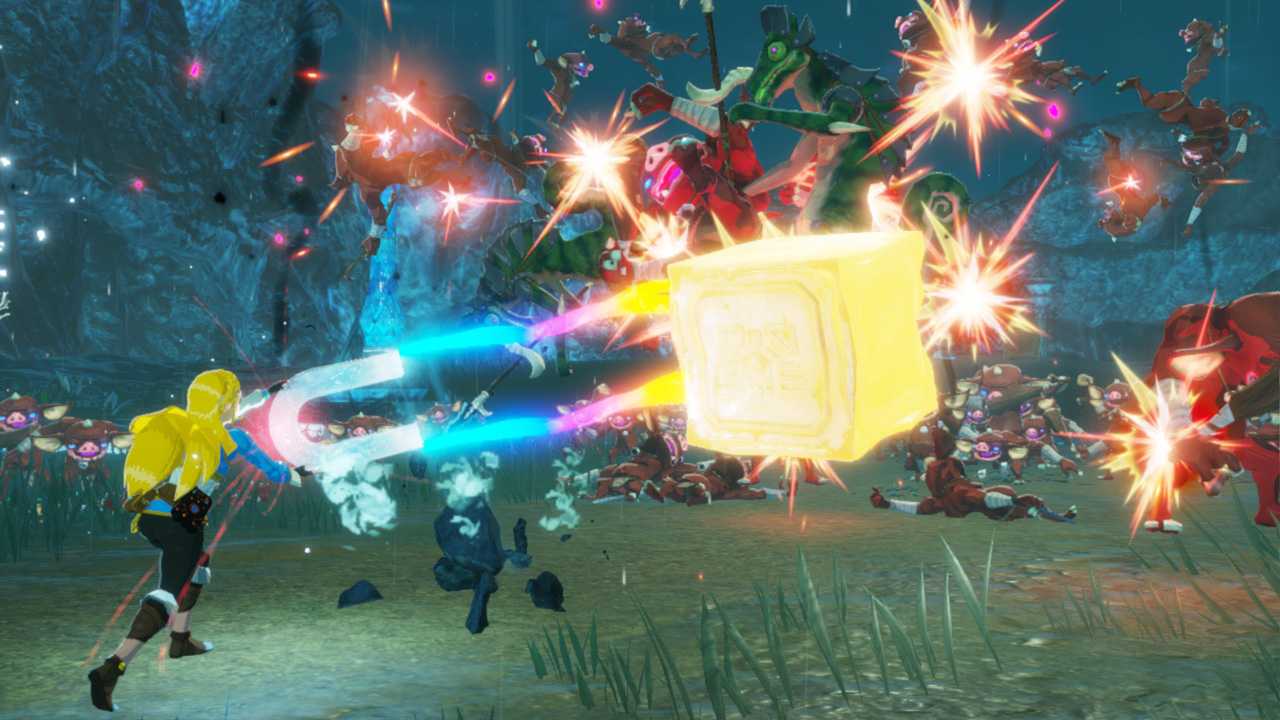 As soon as you have finished one of the missions, you can watch the game from Hyrule map. From this main menu you can choose the missions to be faced. For the secondary ones, for example, it is necessary to defeat all the enemies of a map, the second was timed while in the third it had a large amount of enemies to detonate with strategically placed barrels.

As a reward for completing, you may receive weapons and resources. Also from the map, you can manage the equipment of the champions or improve some facilities with the resources you will get on the mission. By improving the blacksmith you will be able to merge more weapons to create a more powerful one, in the Dojos they are obtained longer combos, merchants can get you more hearts and more structures. 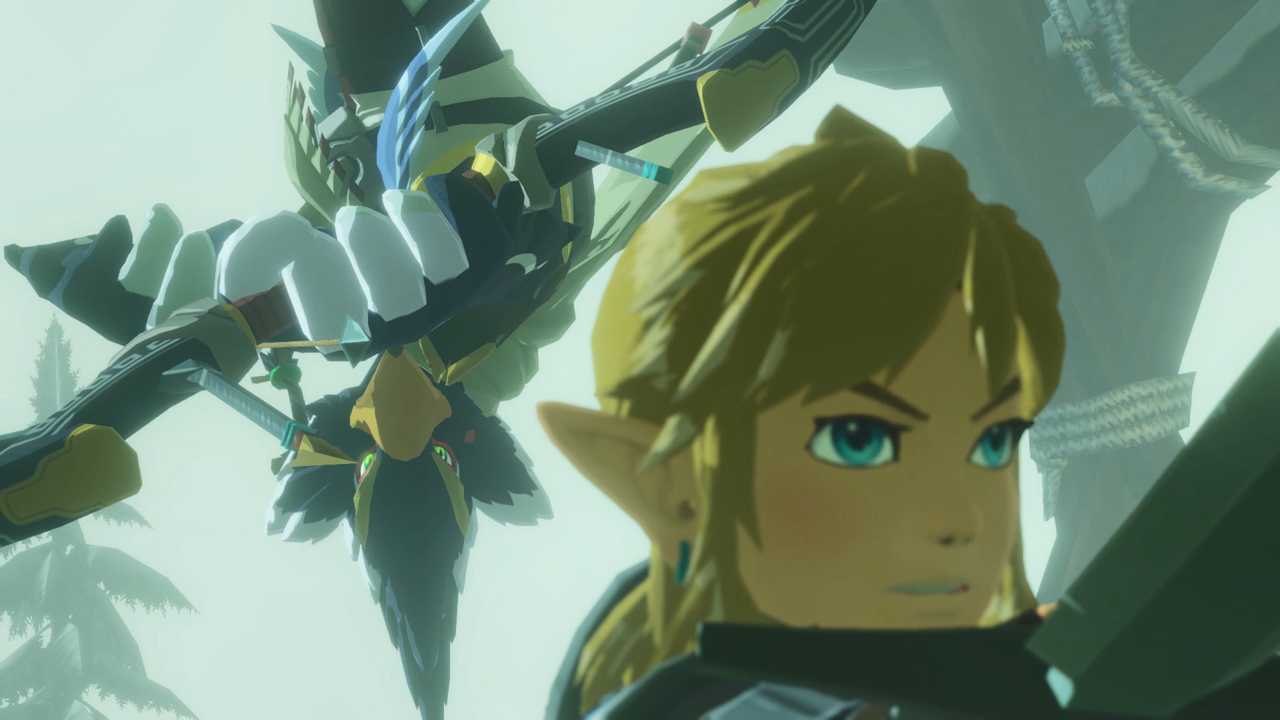 Between the ups and downs of optimization – Preview Hyrule Warriors: Age of Calamity

Turning instead to looking at the more technical aspects of Hyrule Warriors: the Age of Calamity, we have noticed a few uncertainties in optimization. Much of the gameplay aesthetic was naturally recovered from Breath of the Wild, thus offering a respectable panorama. However, the sacrifices to put so many enemies on the screen are clearly visible. Compared to the main title, the number of cast shadows has been significantly reduced, some textures are of low quality, and the dynamic resolution sometimes seems to go below 900p.

Despite this, during the first mission on the Plain of Hyrule, they still noticed some notable drops in framerate and stuttering in the most excited moments. In the rest of the game, however, the FPS seemed less dancers. In general nothing really terrible, but below the usual high Nintendo standards. 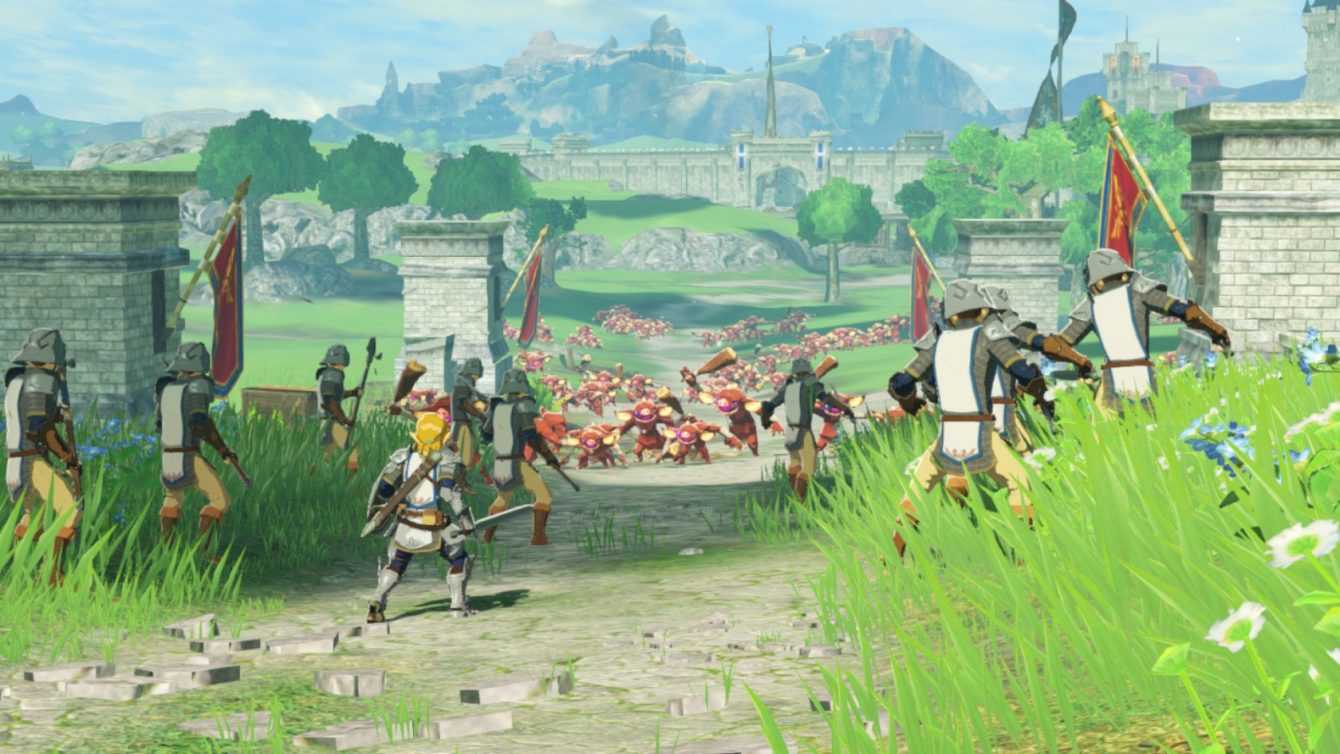 What do we think

Hyrule Warriors: Age of Calamity presented itself in this demo and preview as a very interesting video game, characterized by a fast-paced and engaging pace. From the wonderful open world of Breath of the Wild it might be difficult at first to interface with a musou, but we still invite you to try this demo to let some preconceptions about the genre slip away. From what little we have seen it seems to recover in an excellent way some of the characteristics of the “original” title.

However, some doubts and uncertainties remain, such as the management of the somewhat hasty plot and an unstable framerate. We can certainly get a better idea of ​​the game when it comes out complete on November 20th exclusively on Nintendo Switch.