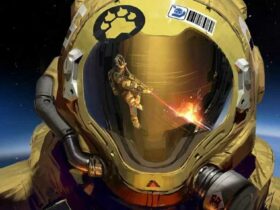 After enjoying the demo released during the last Nintendo Direct, we are here to tell you about Project Triangle Strategy, the new T-JRPG from Square Enix, in this long and detailed preview

Let’s admit that to remember the exact year of Final Fantasy Tactics we had to search the good old internet. Now we find ourselves writing this article sitting in a dark corner, feeling older than we ever expected. January 1998. Just over 23 years ago Square Enix published in the West what is remembered as one of the best exponents of the genre, and direct rival, at the time, of the beloved Tactics Ogre series, whose development team was then obviously incorporated in Square Enix. Do you miss Final Fantasy Tactics? We too, for this reason we have thrown ourselves on Project Triangle Strategy like hungry wolves.

Presented with a trailer during the last Nintendo Direct, Project Triangle Strategy, strangely, is not in the hands of Acquire (former developers of the beloved Octopath Traveler, always exclusive to Nintendo Switch), but of ArtDink. We emphasize the “strangely” because, in addition to being united by the aesthetics and the HD-2D that we have now learned to love, they have the same producers behind them, Asano and Takahashi. Simultaneously with the Direct trailer, Nintendo has also released a demo of the title, which for now has a provisional name, and we could only try it and tell you ours. Welcome to the first preview of Project Triangle Strategy, let’s comment together on the Debut Demo!

This first free trial version allows us to test the title starting from two middle chapters of the story, more precisely chapter 6 and 7. Just as written in the notice of the developers at the beginning of the demo, being these central parts of the story, the plot will be rather smoky and twisted to understand. The invitation, therefore, is to focus more on the mechanics than on trying to understand the events which, inevitably, will be more intuitive in the final version of the game scheduled for 2022.

In summary, however, we are in the lands of Nortelia, a continent where three different nations coexist: Glenbrook, Aesglast and Sabulos. Each country lives, survives and trades differently, sharing proprietary resources with other nations and trying to keep the peace. In the past, in fact, an imposing war called Salt and Iron had broken out, in which the three nations tried to suppress the others commercially by seizing the resources. The war ended, peace was signed and for many years reigned throughout Nortelia. That is until Gustaldov, the commander of Aesglast’s army, decides to break the peace accords by invading Glenbrook. 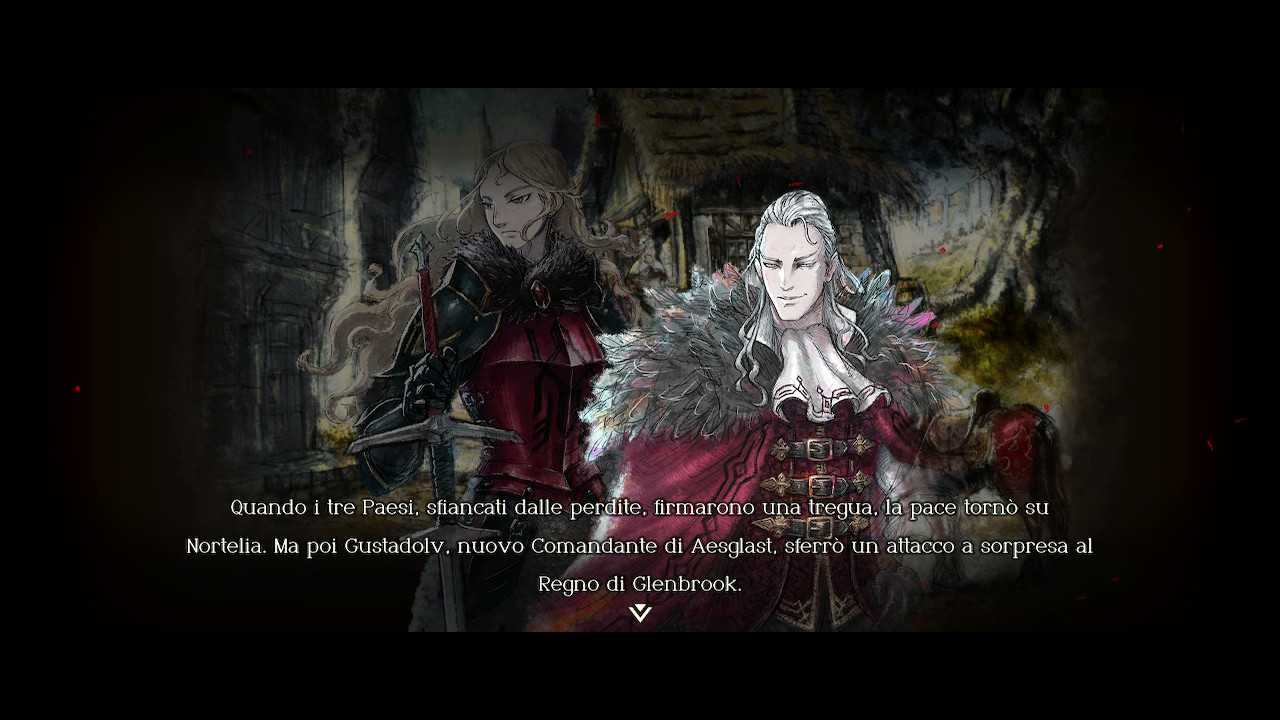 But it’s an episode of Game of Thrones! – Project Triangle Strategy preview

This is where the events narrated in the Project Triangle Strategy Debut Demo begin. Serenoa Wolfhort is our warrior protagonist, belonging to the House of Wolfhort and faithful protector of the kingdom of Glenbrook, as well as best friend of Roland, Prince of Glenbrook. The narrative takes a rather bleak turn when Gustaldov slaughters Roland’s brother in front of his own eyes, indicating that the events will most likely have a truly impactful underlying maturity. We do not want to go further with telling you the events because, although it is true that some points are quite nebulous, the fulcrum is quite clear and interesting to follow. Over the course of the two hours or so of demos that we found ourselves playing, it felt like we were faced with a well-told episode of Game of Thrones.

The strong characterization of the characters, however, is already evident from this test version. Ample space was in fact given both to Serenoa and to each of her traveling companions. In particular, Roland, the second son of a kingdom that he had never dreamed of having to regain for the good of his people. The strong importance given to the mentality and psychology of the characters will make the events even more interesting, especially as regards the political side of the narrative. 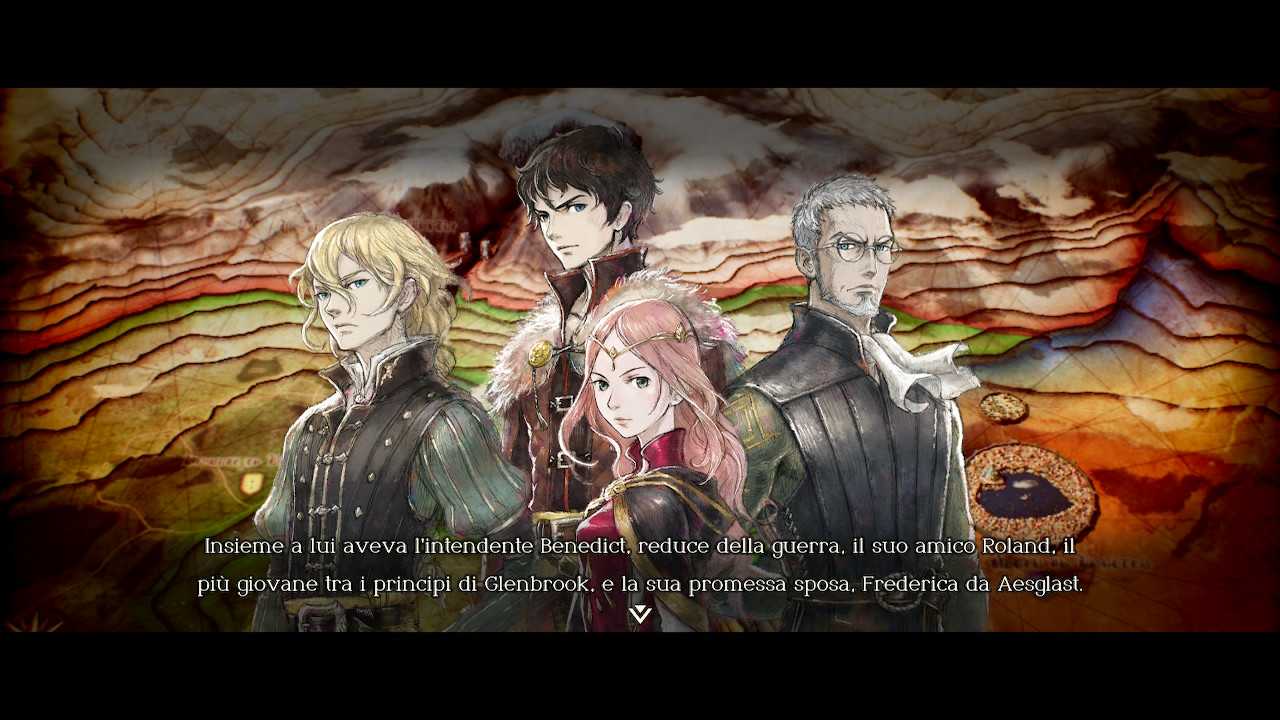 Chapter 6 introduces us to the combat system of Project Triangle Strategy, which at the base is a naked and raw Tactical JRPG, but which already shows several peculiar characteristics. The characters will move on the board in turns, determined according to their Speed ​​characteristic, being able to move and attack only once per turn, with some exceptions. Each character comes with a preset class and abilities in this trial version, usable through the PT (Turn Points) and we do not know if they will also be fixed in the final game or will be modifiable at the player’s liking.

We are quite sure that this will not be the case and that each pawn will have its starting “class” that cannot be changed, but let’s see how the guys at ArtDink decide to play it. From the demo, however, we could still see a good variety in the management of the units. Among fighters devoted to the fray, others similar to black magicians, white magicians, assassins and protectors, Project Triangle Strategy seems to want to make the number of pieces the fulcrum of team customization. We were also able to recruit two new units during the demo, a symbol of the fact that, probably, in addition to the “fixed” supporting actors, we will be able to expand our ranks with more secondary but equally useful characters. 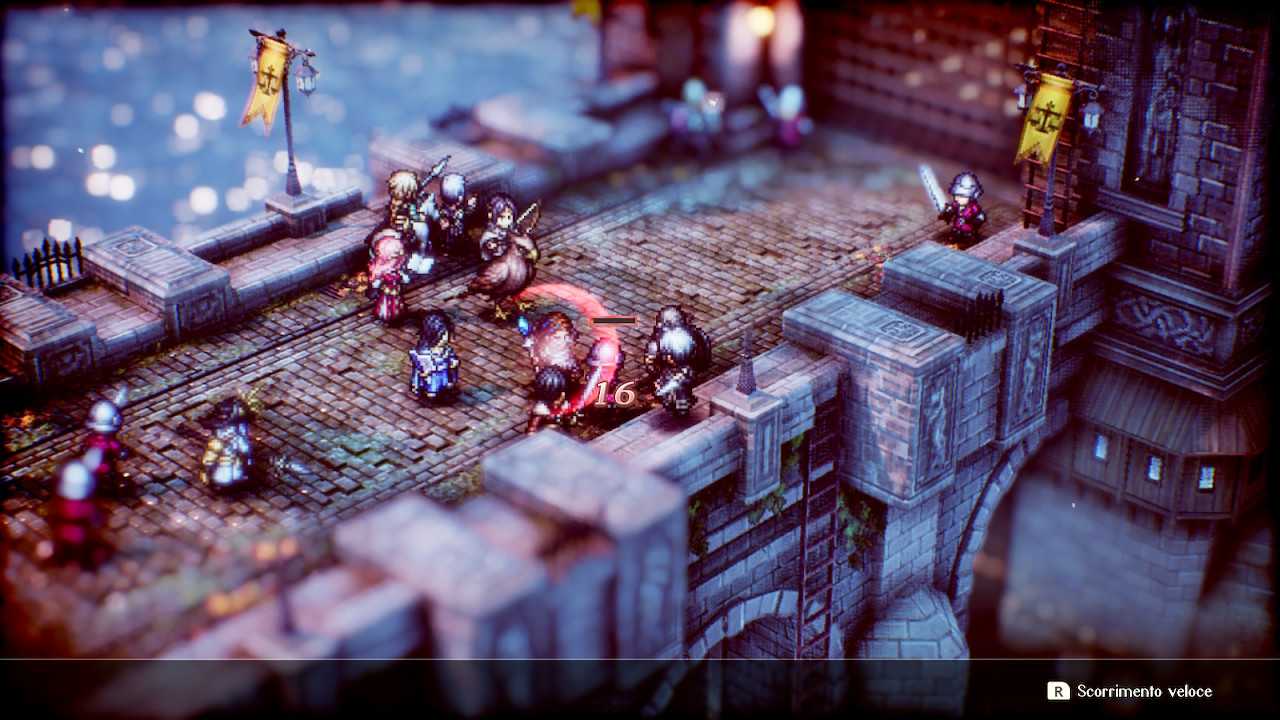 For the rest, the battle we faced in Chapter 6 gave us the proof that Project Triangle Strategy already has a well-established and robust combat system. After an initial exploration phase of the area, in which it is possible to check the area in search of objects and talk to our teammates, we found ourselves in the middle of the fray. The skills available to the various pieces are unique and all quite useful, and it is possible to use some additional technique to hurt the opposing pieces.

We can, for example, surround them with two of our units to hit them repeatedly from both sides as if we were playing ping pong. Or, some tokens pthey will be able to exploit the height of the maps more than the others to inflict further damage with special skills. All devoted to the greatest possible strategy and a concept of “pawn economy”, which once killed cannot be brought back to life during the battle. 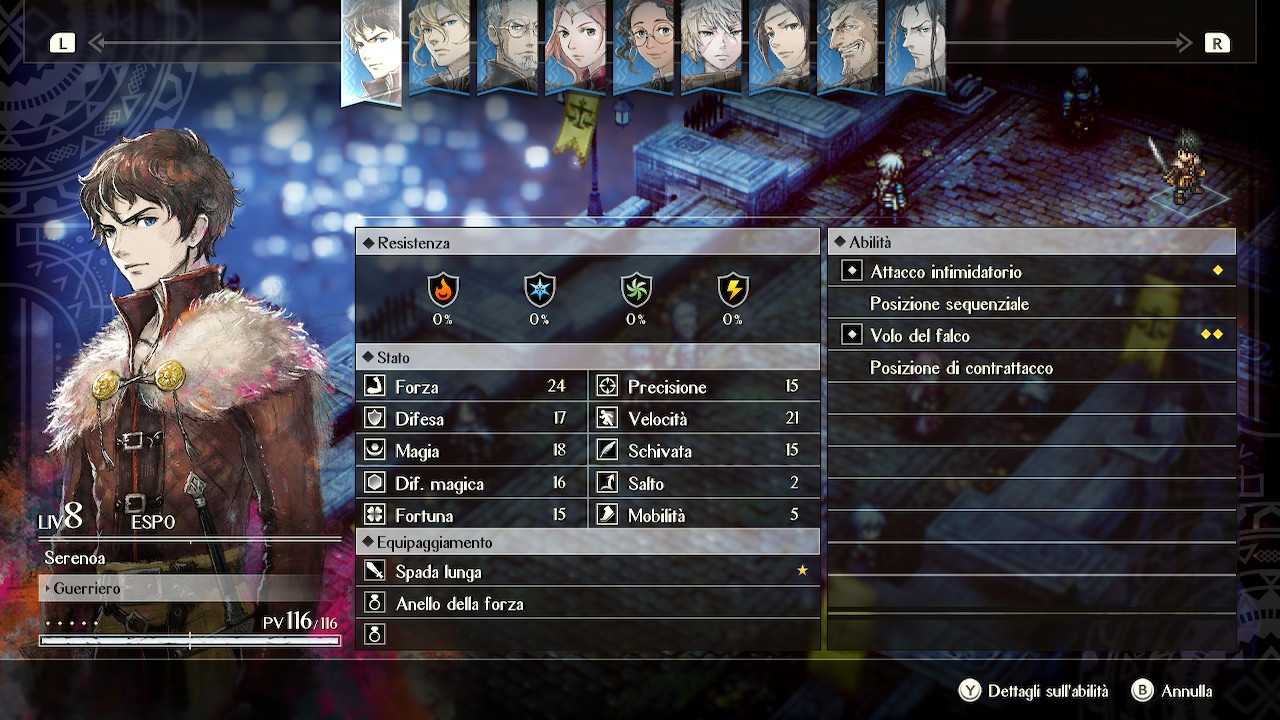 Chapter 7, in addition to an epic final battle that also uses environmental factors to be completed faster and with fewer losses, also introduces another game mechanic that seems to be quite interesting. In fact, in Project Triangle Strategy, some decisions taken during the narrative can vary it considerably. We had already noticed the presence of dialogue choices in chapter 6, but in the next chapter it becomes even more evident when our group finds itself having to make a rather important decision.

Before moving on to the vote, we will have to try to get our allies to follow our line of thinking more. To do this, we will be invited to wander around the village of Wolfhort, talking to the inhabitants and gaining information. These will unlock additional dialogue options to use within the throne room, to make sure that the scales tip our side. A really interesting mechanic, we must say, but one that perplexes us from different points of view. The decision to be made in Chapter 7 seems very important to the story. Therefore, we are not talking about simple additional dialogues, but about real branches. We are at the same time very doubtful and curious to find out where ArtDink wants to go. 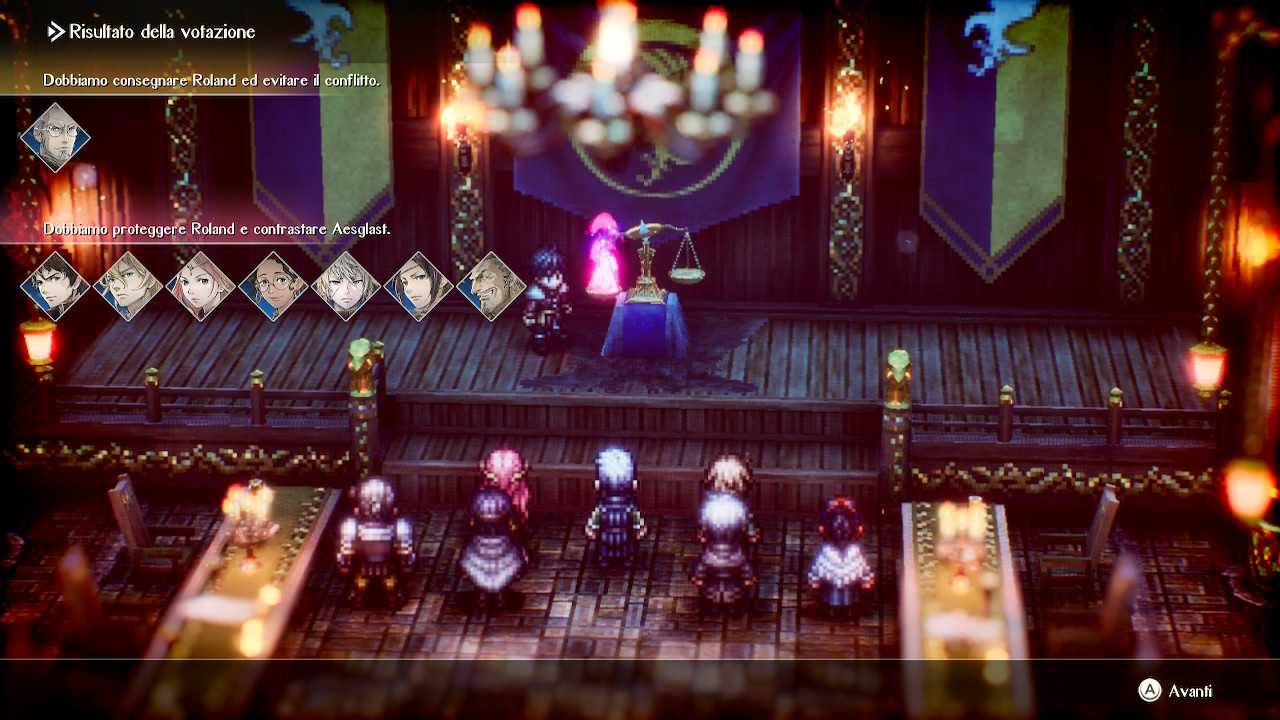 Technically speaking we would like to express ourselves little. On the other hand, we’re just talking about a Debut Demo, so the team has plenty of time to smooth out corners and small flaws. For now, we can admit that aesthetically speaking the title is a real pearl and the hand-drawn sprites of the characters are very detailed and praising the old Final Fantasy Tactics. The settings are very accurate and the background atmosphere seems to be dark and rural, from what little we have been able to see. From the performance front we could see notable drops in performance in the final battle of Chapter 7, after the activation of environmental factors that go to insert particles. Since that time, our Nintendo Switch has started to suffer heavily, with large frame rate drops. Nothing the developers can’t fix over time, however.

A praise also to the soundtrack, which if, in the final version of Project Triangle Strategy, will contain all tracks of this level, it will force us to buy it separately. We noticed a strange dissonance between the English dubbing and the Italian subtitles, the latter of a much higher level of detail than the spoken one. Whether they are based on the original Japanese dub or whether it is a simple adaptation choice we don’t know yet, we can only wait. 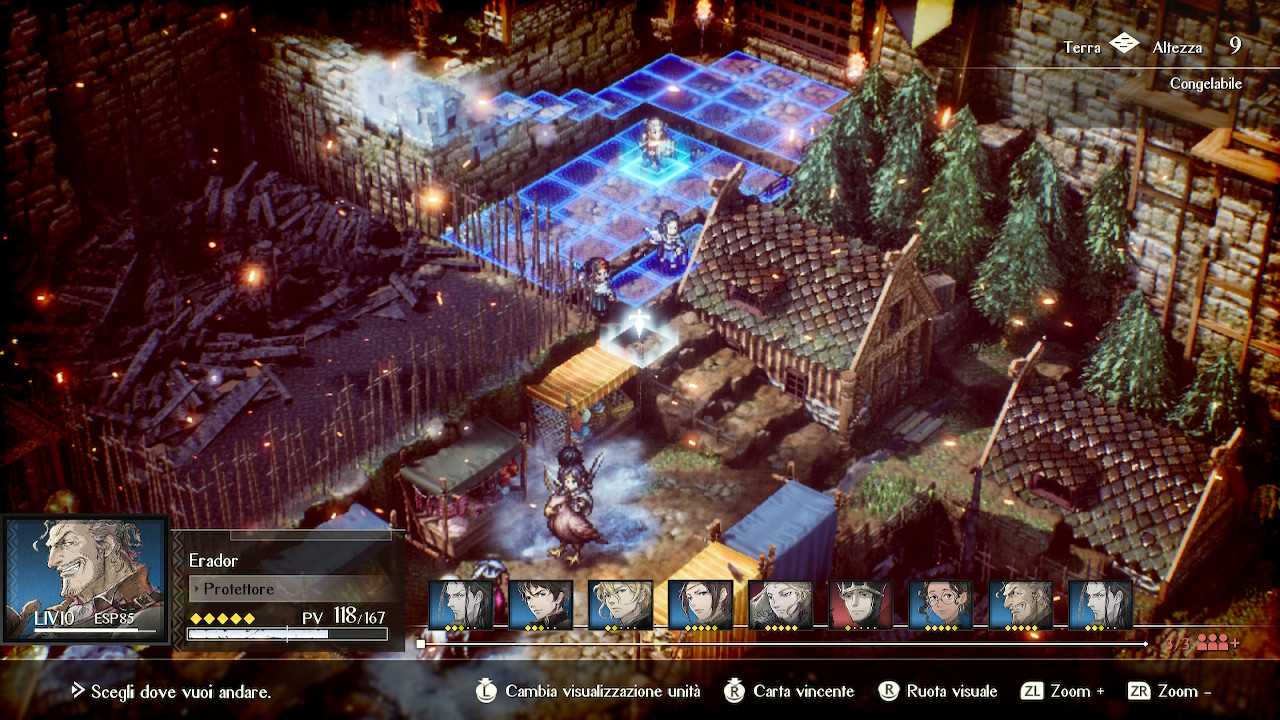 To conclude this preview of Project Triangle Strategy we can say that we are terribly interested in this new project by Square Enix. It is not only the desire to put a hand on a “Final Fantasy Tactics”, it is not just a question of nostalgia in short. The ArtDink title has all the potential to become a masterpiece of the genre, with a solid combat system, a mature script and unforgettable characters. We sit here, in our little corner, feeling really sad and old, but hoping that this new IP will be able to make our eyes shine again.

We invite you to stay tuned with us at TechGameWorld.com for all the news, guides, reviews and previews with a videogame and tech theme! And if you are interested in game keys for all platforms at very competitive prices, we invite you to take a look at InstantGaming!