Reorder your thoughts, charge your neurons because Once and the team of Psychonauts they are about to return and with them all the glory and majesty of the gods 2000s platform video games. It was here, precisely in 2005, that the world first met the team of Double Fine Productions and his first major effort: Psychonauts, a crazy, bizarre video game platform/adventure who rode the then very high wave of the gods 3D video games. Now, after a full 16 years, the bizarre Psychonauts team is about to return with Psychonauts 2, let’s find out what awaits us in this one review.

Psychonauts 2 continues to tell the story of Once he was born in Team degli Psychonauts after the events recounted in Psychonauts in the Rumble of Ruina, the virtual reality adventure of the series, released in 2017. For those who have not played this title, dedicated exclusively to owners of virtual reality. Psychonauts 2 begins with a long and exhaustive video that reminds us where we had come, without making us lose anything.

Once, our funny hero, just stepped out of the ranks on the campus of Psionici, or rather individuals able to manipulate the world around them with their mind. The young psyker is recruited into the theme of Psychonauts, extraordinary characters who use their psycho-powers to spy on the powerful of the earth. The adventure begins with the mental kidnapping of the head of the organization by Caligostro Loboto, a mad dentist who aims to undermine the stability of the group. Razpuntin, Lilli, Milla and other members of the Psychonauts they will soon realize that another disturbing character, far more dangerous, is weaving the networks of this conspiracy.

From here a series of vicissitudes will begin that will lead to the resolution of the mystery but also to the discovery of the psychology of the other characters, the true engine of creativity of the series. The Psychonauts tell each other as you progress in the game as well as Raz’s past and learning about his always useful chase Psionici. Telekinesis, Pyrokinesis, TSI ray and Raz’s other mental powers, are the main weapons we will use against enemies of the mind such as Doubt, Fear, Discomfort and so on. Obstacles of the mind beautifully represented as the villains of the game.

The Double Fine team proposes in a modern key and with the technological prowess of this period, a timeless classic with many elements of the past but told in a new and original way, all set in the unmistakable world of Psychonauts. The power of the Psykers is in better shape than ever and we will use it to our advantage to defeat the impediments that our mind generates and that take the form of monsters and enemies to defeat. Raz will have at his disposal, in addition to the classic basic attacks, a series of powers with which to attack from afar, protect yourself, rise, roll at great speed and much more.

For example, we will be able to hit enemies from a distance, particularly useful for flying enemies, or burn obstacles and objects to reveal secret areas and hidden passages. The fight sequences are also alternated with exploration sequences where the “platforms“Are the masters. In the various levels, always new and original and rarely similar to themselves, we will have to use our abilities and the psionic ones of Raz, to reach new areas, obtain objects and progress in the story, more insane than ever.

All the elements of platform games are here, in their brightest form. Moving bases, small puzzles to solve, colorful levels, many enemies and many, many collectibles. In fact, scattered throughout the levels we find a series of objects such as the “reveries“, Fluttering sketches that can be collected to enhance our powers. Or again we find the “emotional baggage”, represented as real suitcases to which we must relocate the appropriate label of the right color. A simple but effective pretext that will push you to explore every juncture in search of the new collectible. 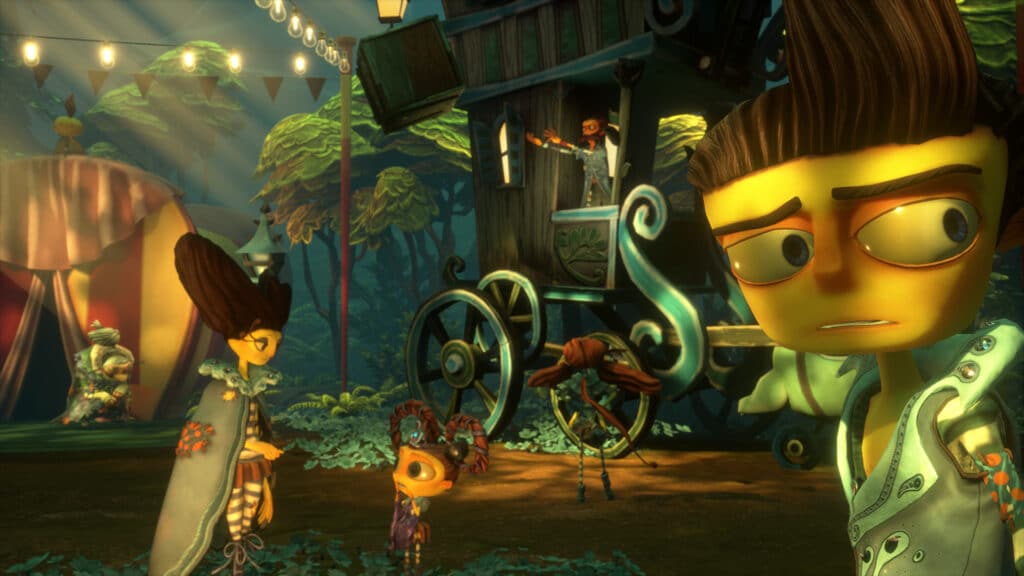 The true spirit of Psychonauts that we have come to love over the years is now back in great shape and rediscovering the historical characters of the first chapter has warmed our hearts. The nerve center of this sweet nostalgia is the headquarters of the Psychonauts. It is a real “level” with side missions, objects to find e i bizarre characters that characterize the franchise to talk to. We will also have the opportunity to visit the minds of some of them thanks to psychic incursions. Each being is characterized by a unique style and setting that fully reflects the psychology of the characters, of which we can learn something more.

This is precisely the strong point of Psychonauts, the “relationship” that is created with the various characters and the plot, always funny and curious, which is carried forward thanks to them too. Although the gameplay rarely presents particularly innovative elements, the structure of the game, the settings and the characters represent the real appeal that will be able to conquer both the lovers of the series and the new aspiring Psychonauts.

Style always at the top

All the explosive mix of Psychonauts is now brought to us with the graphics and performance of Microsoft’s next generation console. To be precise, we played Psuchonauts 2 on one Xbox Series S and the performance was outstanding. Never an important frame drop even in the most eventful situations or major bugs. We happened to observe some glitches here and there but nothing that upset our gaming experience.

This fluidity makes it even more enjoyable to observe the truly unique worlds and environments of Psychonauts 2. A perfect mix of madness, lights, sounds and music from a fantastic 80s disco and a lot of sense of humor.

Psychonauts 2 review in a nutshell

Psychonauts 2 is exactly what a true Psychonauts fan would expect from its sequel. All the best elements of the Platform combined with a truly unique and particular “personality” of the videogame that will renew a dormant love in gamers and will be able to conquer lovers of the genre who have not yet explored the potential of their mind. Get ready, because a great journey is about to begin!

Psychonauts 2 will be available starting August 25 on PC, Xbox One, Xbox Series X / S and PlayStation 4.