On the occasion of the release of Rift Apart, let’s take a look at the history and evolution of the Ratchet and Clank saga in this retrospective

There are times when every player wants to play carefree. Without paying too much attention to the gameplay or simply to get out of the “hellish circles” of a competitive title, a roguelike or a soulslike one and go back, if only for a moment, to one’s childhood. In these cases he comes to the rescue Ratchet and Clank. For those who still do not know it, this series of action adventure video games is developed by Insomniac Games, the same as Spyro and the recent Spiderman, and was born in 2002 on consoles PS2. Let’s find out more in this retrospective dedicated to Ratchet and Clank.

Action to the most I can not

The first title, called precisely Ratchet and Clank, distinguished itself from all the rest of the playful production of the time thanks to the mixture of elements platforming with action elements from shooter in third person. These features, in addition to the variety of gameplay, will pervade the entire series. So let’s go back to the history of the most beloved video game duo in this retrospective on the Ratchet and Clank saga. 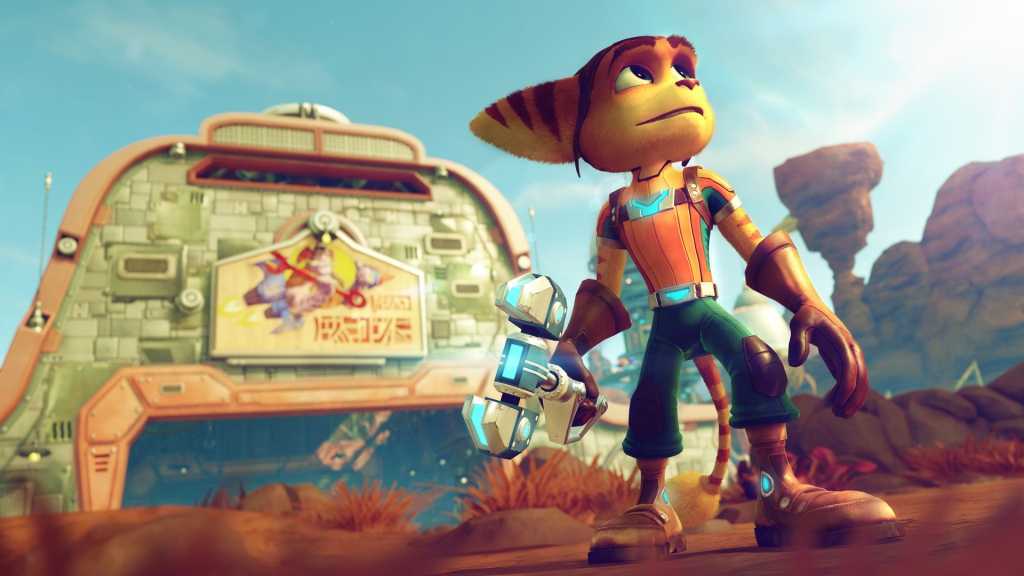 As already mentioned, the first historian Ratchet and Clank has strongly innovated the video game market. In addition to the characteristics already mentioned, the title proposed a context and a mood completely over the top, with purely humorous tones and jokes every three for two which contrasted with the rest of the playful production of the time. The plot featured the strange duo formed by the Lombax Ratchet and from the small but versatile robot Clank to travel between the worlds of the galaxy Solano, to find out the plans of the evil president Shit. It must be said that the plot in the Ratchet and Clank games is almost always a pretext to introduce the player to the fantastic worlds, the absurd weapons and the weird characters that meet.

This is precisely the chapter in which the iconic are introduced weapons and the iconic ones gadget which we will find in later games. From the Omnichiave to the classic blaster, ending with the various backpack modifications, such as the heli-backpack, the hydro-backpack and the turbo-backpack, the game offers a wide range of tools and gadgets to use and which will progressively unlock along the course adventure.

The tone of the characters’ dialogues is always seasoned with jokes and moments nonsense that embellish and integrate perfectly with the world building and the rhythm of the narrative. The various planets, made up of freely explorable areas, they hide secrets and collectibles that encourage replayability. The progression in learning mechanics and inupgrade of the paraphernalia is certainly another strong point of the game. 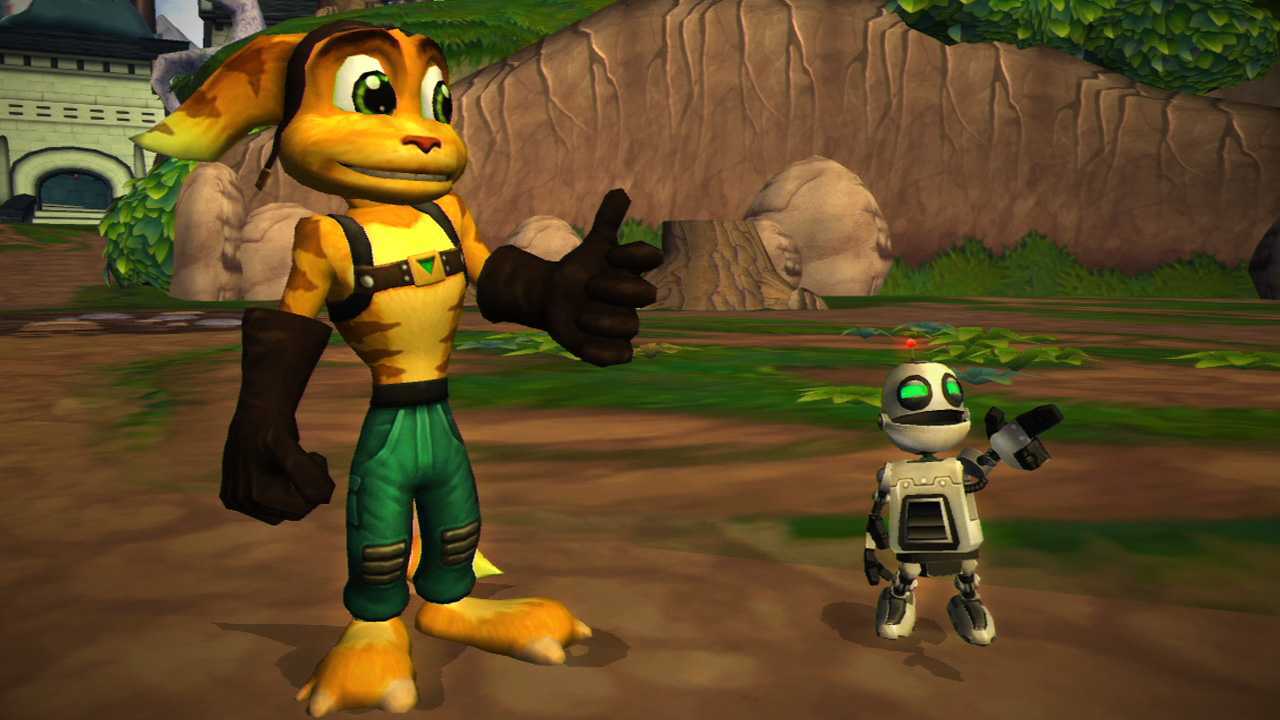 The plot in Weapons of Destruction turns on the conflict with the evil Percival Tachyon, emperor of the Cragmite race, who has targeted the Lombax accusing his race of exterminating the Cragmites themselves. This time, however, in addition to Clank, Ratchet is accompanied on the adventure by the intrepid space piratess Talwyn. Once again we find in the game, in addition to the comedy of characters like the Captain Quark, also the classic action mechanics of the other chapters. The progression system remains excellent, with a game design that rewards exploration and backtracking, both for secondary quests and to upgrade weapons or to obtain collectibles, that is i Bolt d’oro.

The PS3 period continues with In Search of the Treasure. The latter is more like a transitional chapter between Weapons of Destruction and A Crack in Time. In addition to new mechanics of environmental interaction linked to Ratchet’s Omnichiave, in fact, there is a certain sense of scaling. Less hours of gameplay in more linear environments without alternating gameplay with vehicles or minigames. A “more of the same” but still made with the usual, very high quality by Insomniac. Especially in polygonal modeling and in the design of environments and characters. A Spasso nel Tempo, on the other hand, takes up the events seen in finale of In Search of Treasure. 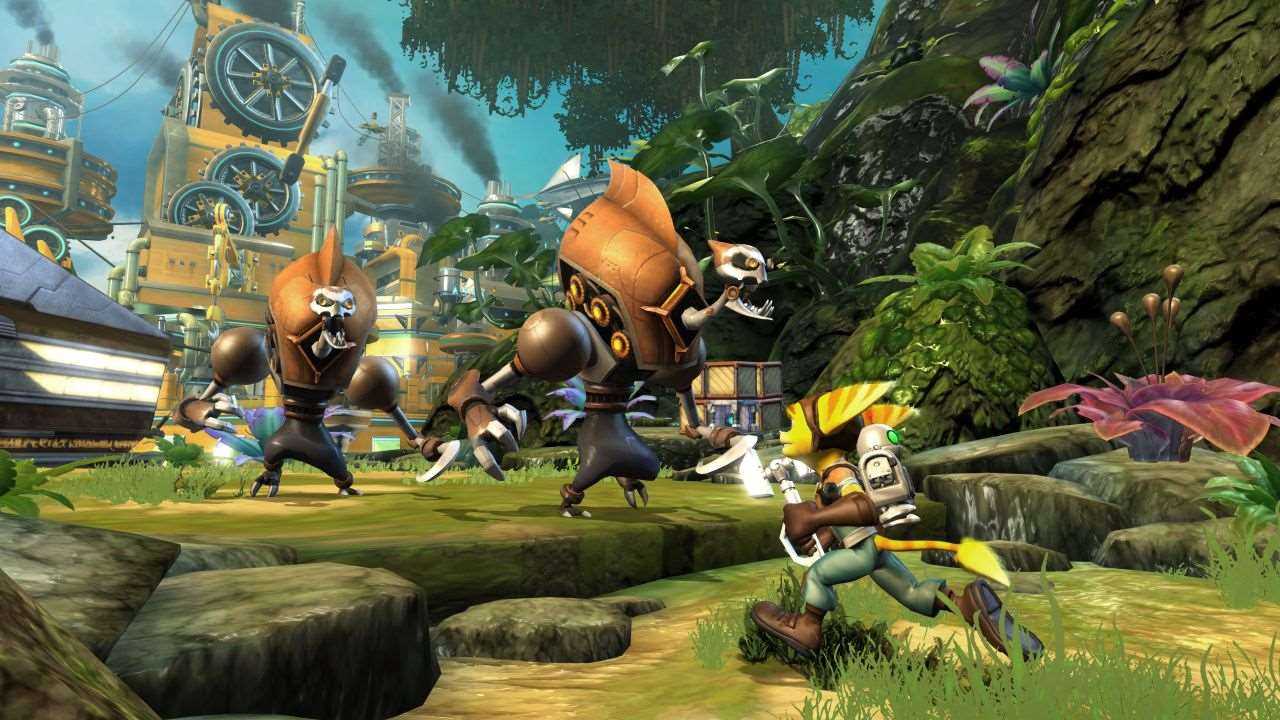 The game begins with the search for Clank kidnapped by the Zoni, creatures who have the task of managing the passage of time. The plot sees the fearsome (but not that much) doctor Dr. Nefarious trying to conquer and take control of the Great Clock, a device located at the center of the universe capable of making you travel through time. Obviously our heroes, after a battle on the Nefarious space station, manage to defeat him once again.

The title this time focuses a lot on issues related to time, both in the plot and in the gameplay. In particular, in this episode, the minigames starring Clank. The latter, being based on the activation of timed controls, require a minimum of skill from the player. Overall in chapter is in line with the rest of the series, with the introduction of new planets, such as the Great Clock. Finally, it closes the PS3 generation, Ratchet and Clank Nexus.

Nexus is the latest installment in the trilogy set in future. The title in question, despite remaining an excellent game in general, by Insomniac standards, lasts a little too short. At the time, in fact, it was sold for around thirty euros. For this reason, one could already guess the “In Search of Treasure” effect. That is a well-packaged title, with its own progression, but which offers a rather short storyline and worlds that can be completed 100% in short time. The only innovation is given by the different nature of Clank’s abilities to be used in the game sections dedicated to him. Here, the time riddles have been replaced with the alteration of the strength of severity. 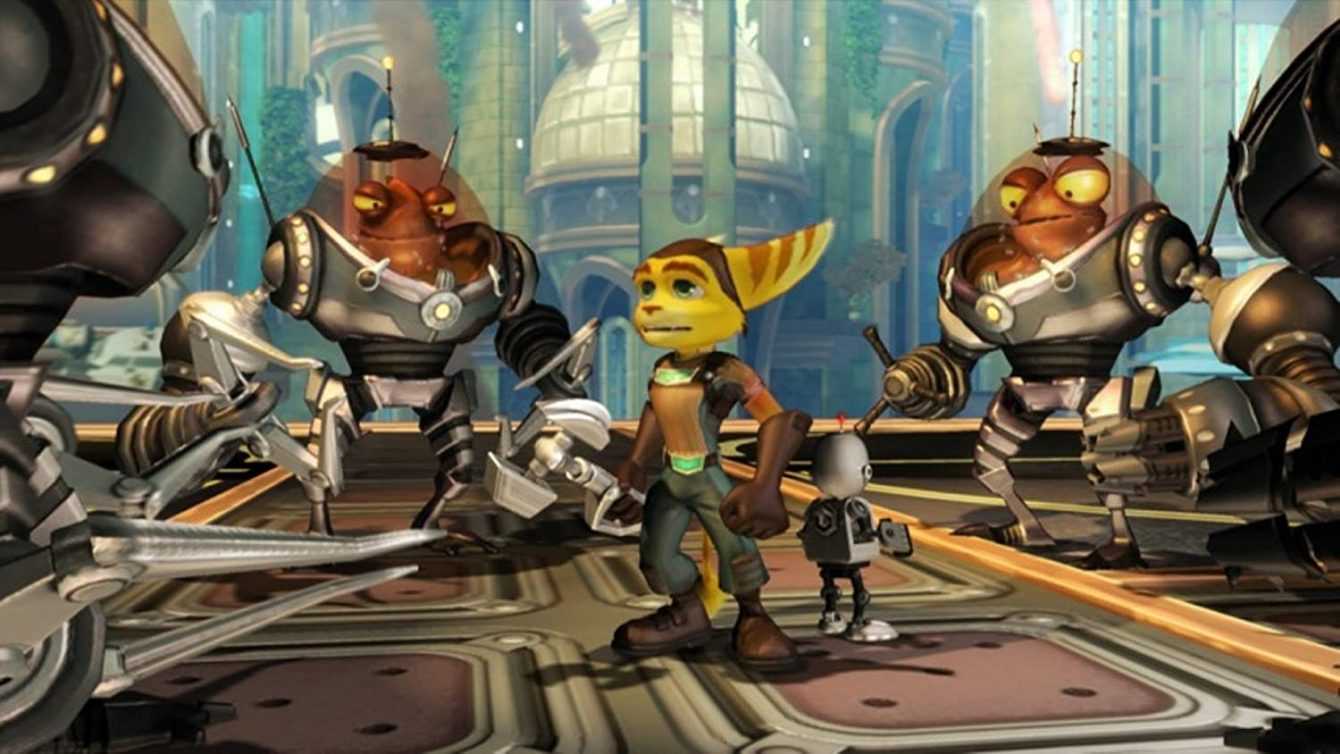 Leaving aside the spin off and the minor chapters released for PS3 and PSP, such as Secret Agent Clank, All 4 One and QForce, and beyond the collection released for PS3 in 2012 which includes the first three remastered games, Insomniac has created in 2016 a splendid one remake of the original chapter of 2002. Let’s talk about Ratchet and Clank released for PS4 console. The title in question differs from the original one, in addition of course to the renewed sector graphic, mostly because of some rearrangements narratives.

The incipit of the story sees the intergalactic evildoer Shiv Helix, locked up in the prison of Aleero City, meeting the captain Quark locked up in his turn. At this point Quark begins to tell the story of Ratchet and how he got there with a flashback. Effective stratagem because the player will find himself displaced and will want to find out how the most esteemed intergalactic superhero, Captain Quark, has been locked up in a prison along with the most evil criminals in the galaxy. 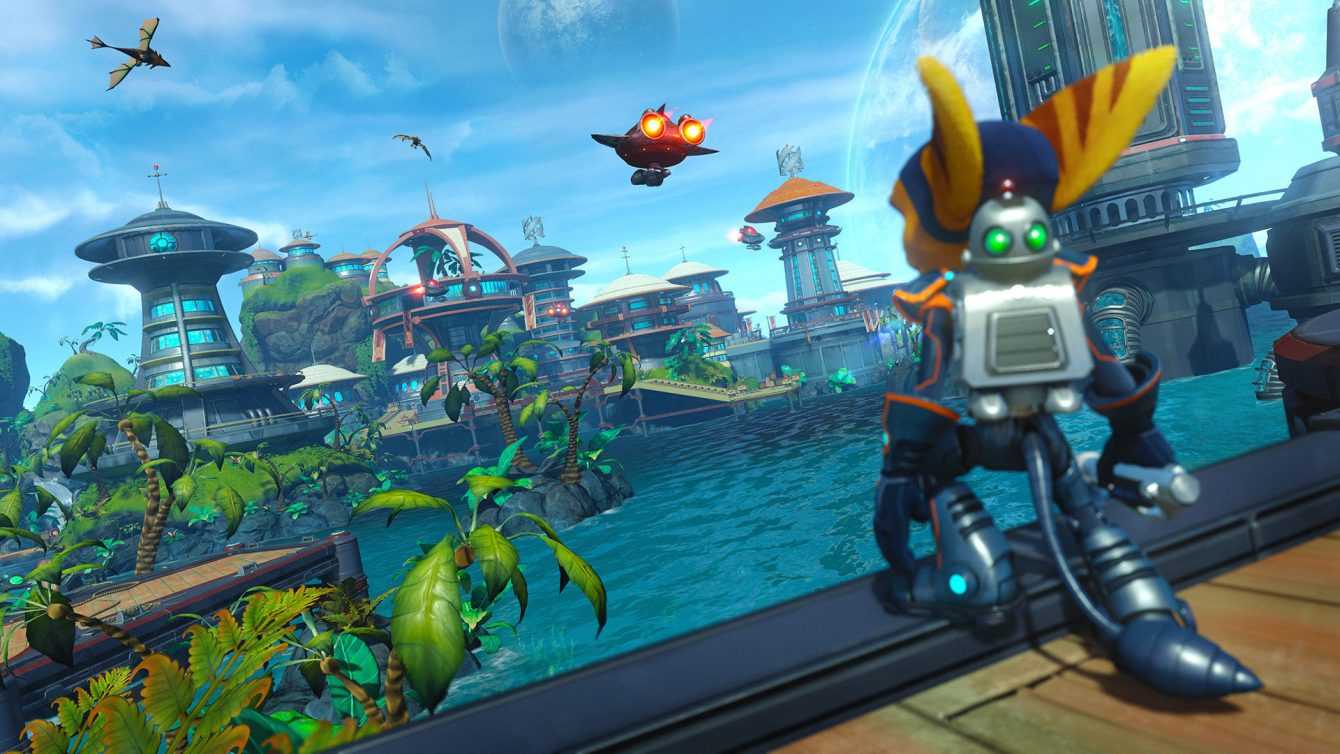 A further (and central) element that diverges from the original title is the presence, as the main enemy, of the Dr. Nefarious. Here, Nefarious is the mastermind behind Drek’s plans for conquest. At the end of the story you will collide with Nefarious in an attempt to destroy him Deplanetizer (in the original Deplanetizer chapter) and save the planet accordingly Veldin from its destructive ray.

Other gameplay changes include the addition of new weapons, such as the pixelatore, as well as a new challenge mode and collectible cards. The latter, once a set of three cards is filled, will give you a bonus to statistics. By collecting them all instead, you can unlock enhanced versions of their weapons and unlock the RYNO, the strongest weapon in the game. This will be the last chapter before the arrival of Rift Apart. 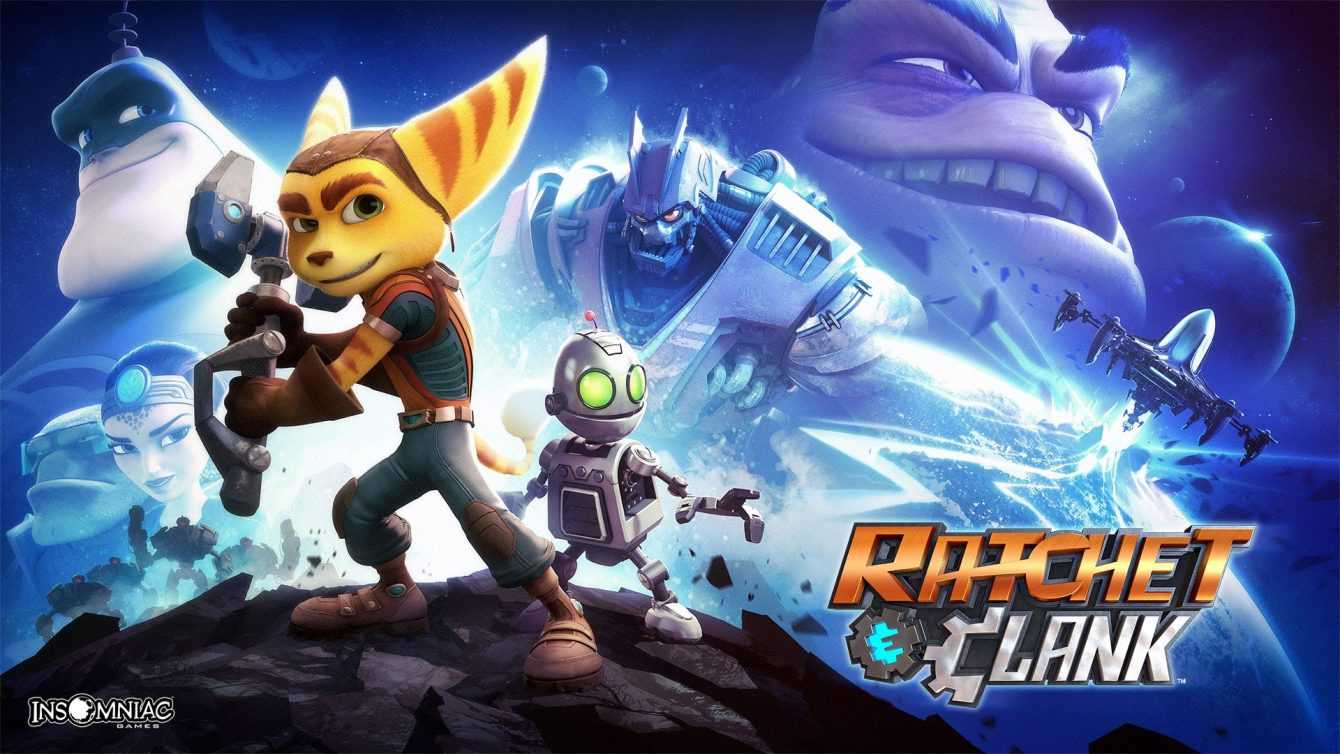 The reason behind it comes out like that close together over time, in fact we are talking about a chapter every one or two years in the PS2 and PS3 era, it is to be found in pressure exercised by the publisher Sony, who immediately understood the sales potential of the product and pushed for a massive and frequent one distribution. All the judgments and analyzes on the game structure reported so far, can easily be translated for almost all the chapters.

Ratchet and Clank is in fact one of those franchises that has never changed its connotated basic and perhaps, if desired, this is one of its points weak, or force. In other words, it has always remained coherent and true to himself. This until the exit of Rift Apart. This new title, coming out next June 11th, it seems to want to bring the gameplay caciarone ed explosive the series to the next level. Starting from the implementation of the PS5’s DualSense features, up to the absurd new weapons and skills available. The element, however, could constitute a real reason for turning point, lies in the willingness of the developers to give one depth narrative to plot.

We remember that until now, always being over the top, the continuous jokes, the gags and the light tones, were used to win the player’s attention and make him empathize quickly with the characters at the expense of a plot deep and “mature”. However, the introduction of the character of Rivet, the female Lombax, combined with the narrative context of inter-dimensional travels, could lead the narrative towards still unexplored shores but above all give further proof of maturity for the US production company. To season it all, from what was shown in the gameplay trailers, you can guess a greater cinematicity of the scenes and direction. 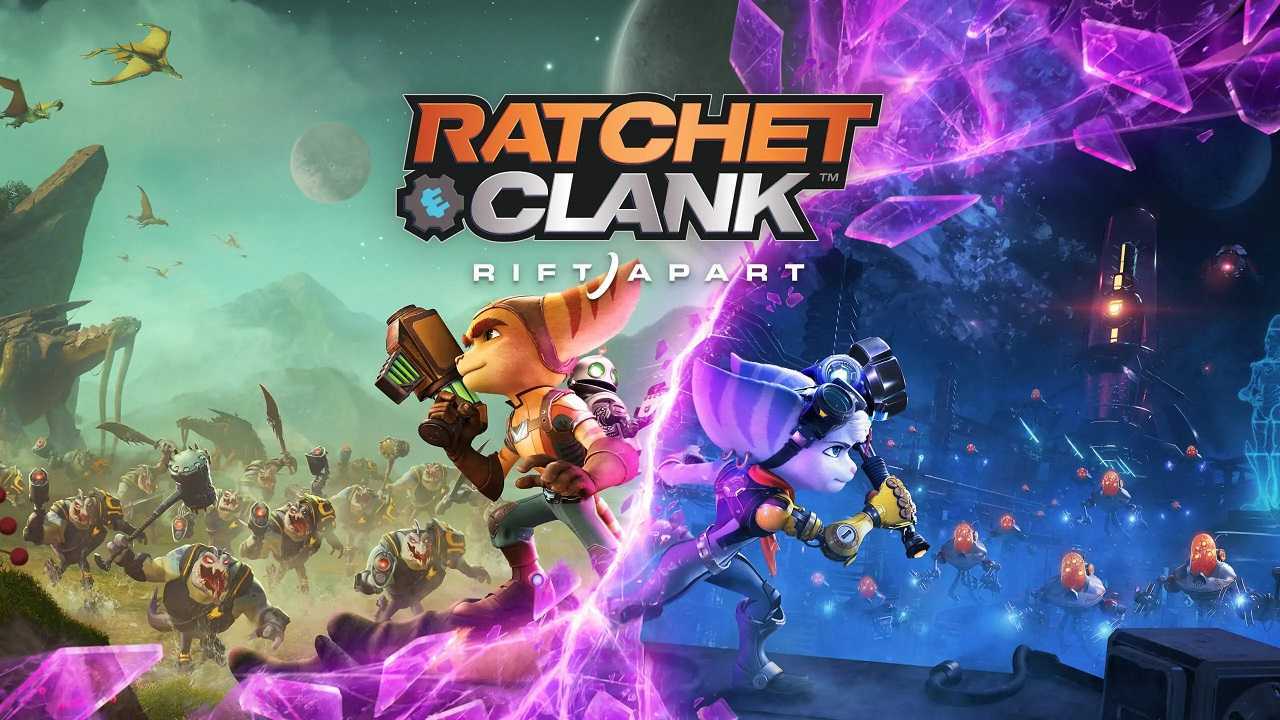 In this retrospective we were able to recover the playful value of the historic saga of Ratchet and Clank. Therefore, for those who have not yet done so, the advice is to recover it, also because of its accessibility. If we had to sum up the series in one word, this would be: funny. In each chapter, in fact, you will never find dead moments or drops of rhythm. Indeed, the frenzy and action will increase as you continue the adventure, in a crescendo more and more crazy.

Not just action though, because Insomniac has managed over time to create a real narrative universe starting from zero. The cartoon style, the richness and variety of settings and planets, the care in the models, in the absurd weapons (my favorite remains the Pecorizer) and the pace of gameplay make these titles a breath of fresh air for all gamers. We therefore look forward to the release of Rift Apart and wait to see how the …