The time comes for everyone in life to change, sometimes in a light way, other times in a more radical way. That moment for Renault Megane comes now: goodbye to the compact hatchback for over 25 years on the market, it’s time to evolve into something different. That something is called Renault Megane E-TECH, 2022 will be the year of launch and of the old Mégane will keep only the name. Under these bold and (almost) crossover lines one is hiding purely electric car, with an interesting mechanic and a lot of content. Which? Let’s find out together.

From the outside, everything changes: Renault Megane E-TECH is original, almost a crossover, and shorter than before

Let’s start immediately from the aesthetics of this new Renault Megane E-TECH, which from 2022 will change the perception that has been had of this name. Although in fact Renault still wants to define it as a classic compact, the truth is that the proportions and appearance are Crossover, as is fashionable nowadays. In addition, thethe subdued elegance of the previous thermal Mégane, which has been on the market continuously since 1995, will leave room for an original car and self-confident, which incorporates some stylistic features of the brand but taking them to a new dimension.

And speaking of size, already here is the first, great change. Compared to the 4.36 meters of the thermal Mégane, in fact, the new Renault Mégane E-TECH measures only 4.21 meters. A good 15 centimeters less, which completely changes the perception of the car, now shorter and with a taller and more massive appearance. This change in the length of the car, together with the presence of a bodywork with very high waistline and rather narrow windows go to give aimpression of greater height than it actually is. The new electric Mégane E-TECH is indeed 7 cm higher than the previous one reaching 1,50 m. Many, but not enough to make it a full-blown crossover. 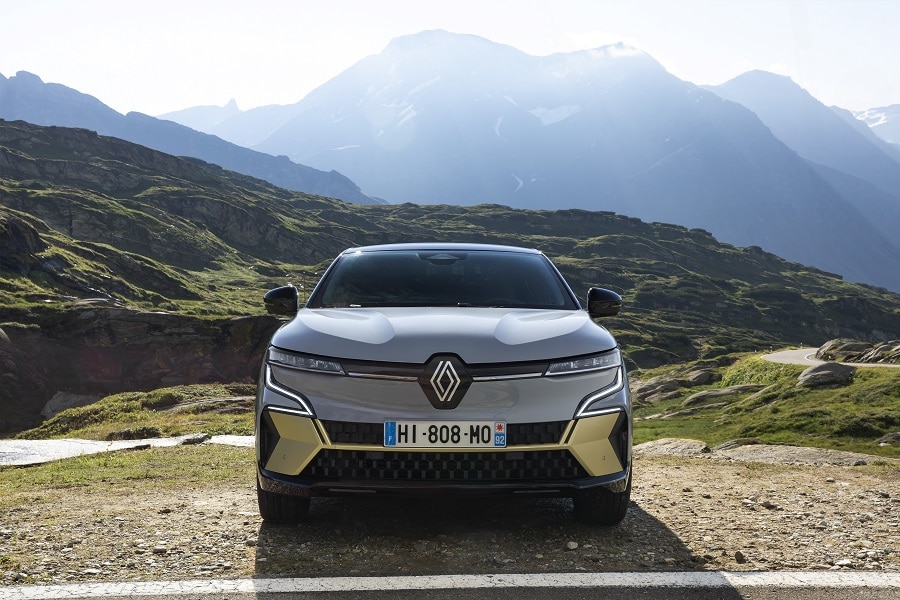 Aesthetics are therefore what makes Mégane E-TECH much more crossover than traditional sedan. The front is high, massive and dominated by the large redesigned lozenge. Obviously, a classic mask is missing, since there is no engine that needs cooling. The front, however, does not lack personality, with the rather long and sculpted hood, and gods very thin and sharp full LED headlights. Completing the front look is the luminous signature reminiscent of a raptor’s beak, e in form they recall the previous thermal Mégane, which first launched the C-shaped daytime running lights in the Renault brand. 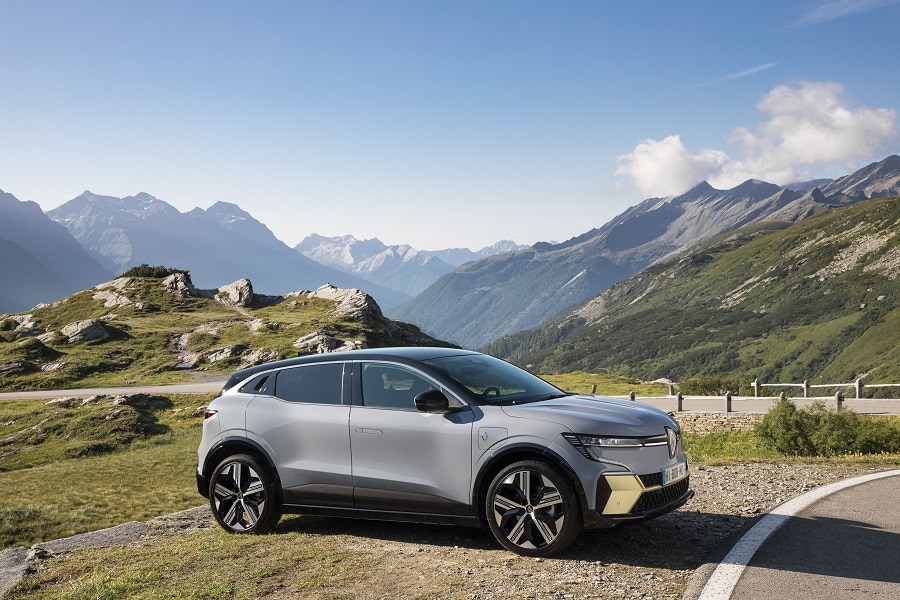 On the side, Renault Mégane E-TECH sports a very massive line, highlighted even more by the huge 21-inch wheels. As mentioned, then, the high waistline and thin windows give it an even more SUV-flashy look, while both the front and rear doors have hidden handles, the front ones disappeared and “drowned” in the cut of the windows as on Clio for the rear ones. 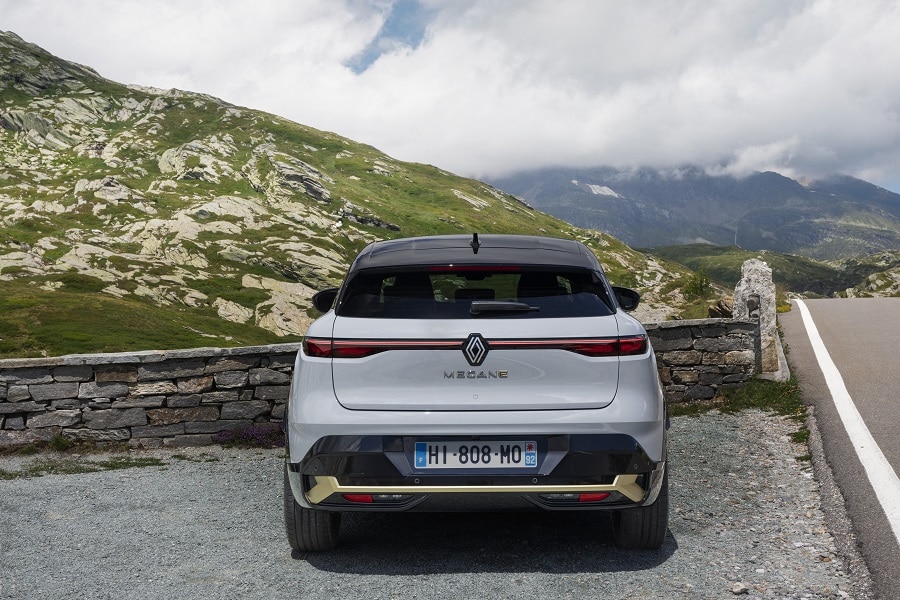 We obviously close with the coda, which reaffirms the most massive and important cut of the aesthetics of this car. Thanks to the newly developed electric platform, the step is very generous, from 2.70 m, and this is also reflected in one very minimal rear overhang. The tail then has a slightly sloping roof, also available with a contrasting paint finish, and the tailgate is massive and male. The rear diffuser and molding in plastic and with a customizable color profile (in gold, in this case) help to lighten the lower part, while the rear lights stand out, anch’essi full LED. 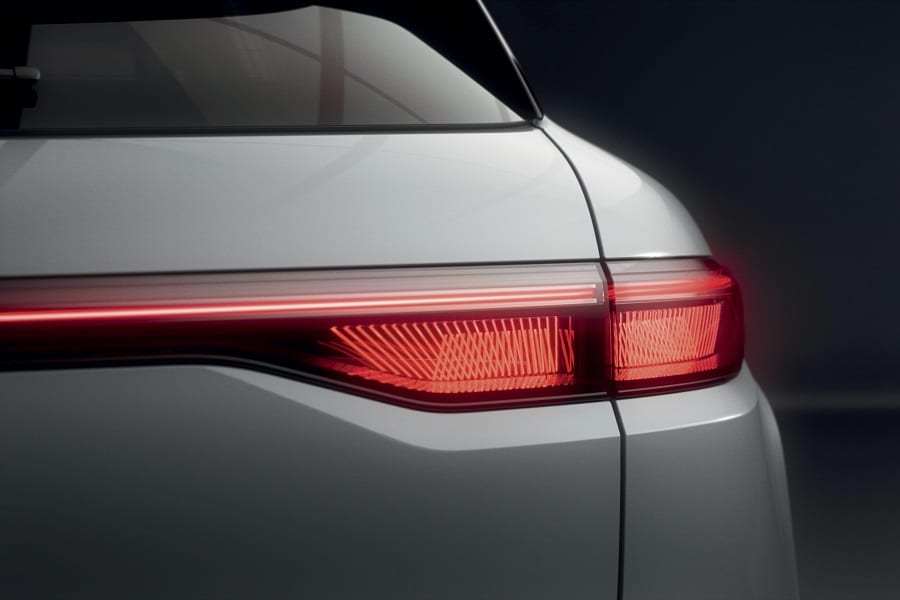 These headlights run towards the central Renault logo, going to quote again the previous thermal Mégane. More, the luminous part of the headlights is made up of a series of very thin laser-cut filaments of light, which give a signature in the dark that is unique to say the least. Overall, Renault Megane E-TECH brings in 2022 a massive, personal and very original aesthetic, which differs a lot from the previous thermal Mégane but carries on some details, modernizing them.

It’s inside? From 2022, Renault Megane E-TECH will revolutionize the interior of the House: minimal and technological

And the theme of the modernization of the stylistic features of the previous Mégane does not end up. On the inside, on the contrary, this stylistic figure finds its concretization even more. The interior setting is indeed quite similar, with the sporty and pleasant to look at steering wheel, the digital instrument panel and the large vertical central infotainment screen. Everything looks as before, except that nothing is, in practice, as before on the new Mégane E-TECH. 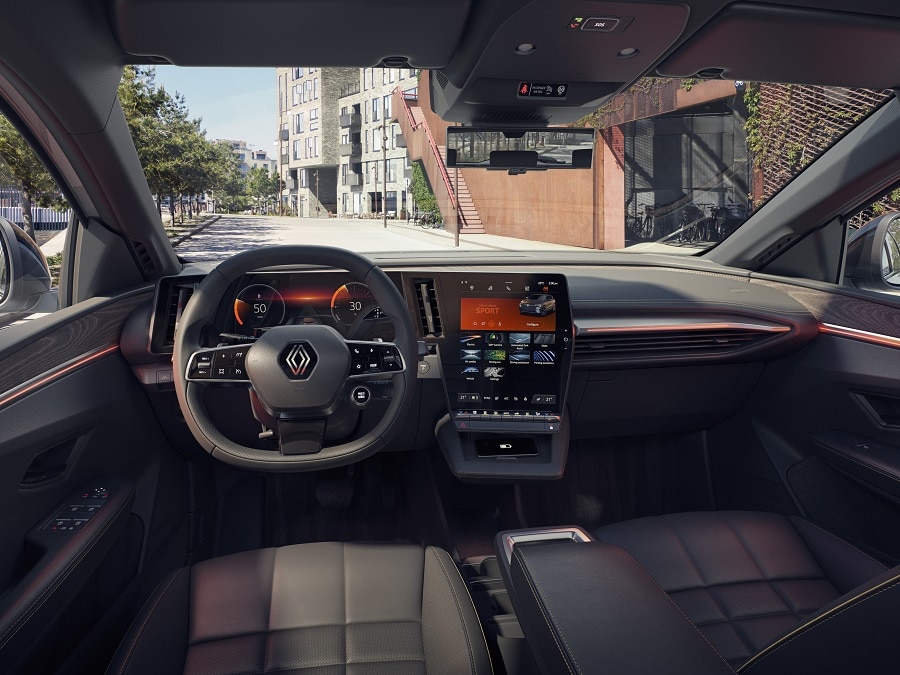 To begin with, for example, they disappeared climate controls, previously partially physical, as well as the classic central tunnel with gear lever. The lever is now placed behind the wheel, and in the center there is space for storage, cup holders and more living space. At the center then we find the great revolution of Renault Mégane E-TECH, which in 2022 will make the system debut OpenR Link. This is a new operating system that recalls the EasyLink in the graphics that we have known about the latest Renault but it is actually based on a totally different platform: Android Automotive. This base, now increasingly widespread, allows you to take advantage of Google maps, the Google Assistant and even the Google Play Store, from which you can download apps for maps, music and free time. 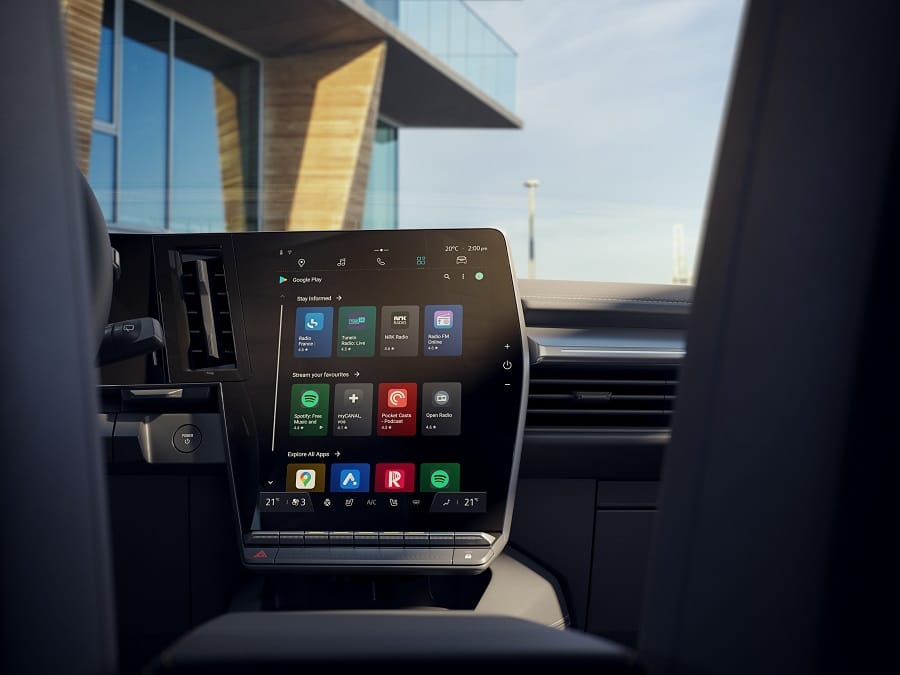 The big advantage, however, is to have a fluid, functional and always up-to-date software. But in addition to what’s under the body the shape is also totally new with which the infotainment system is proposed to the driver. We indeed have one L-shaped screen, which incorporates the screen for the digital instrument panel, the infotainment screen and, surprisingly, the air conditioning vents. The digital instrument panel, which has an HD resolution panel, fits nicely 12.3 in. That central, on the other hand, on the entry level versions it can count on a diagonal from 9 inches, while on the top of the range you get to 12 inches. The quality of the larger panel, then, is QHD, at the top of the category. 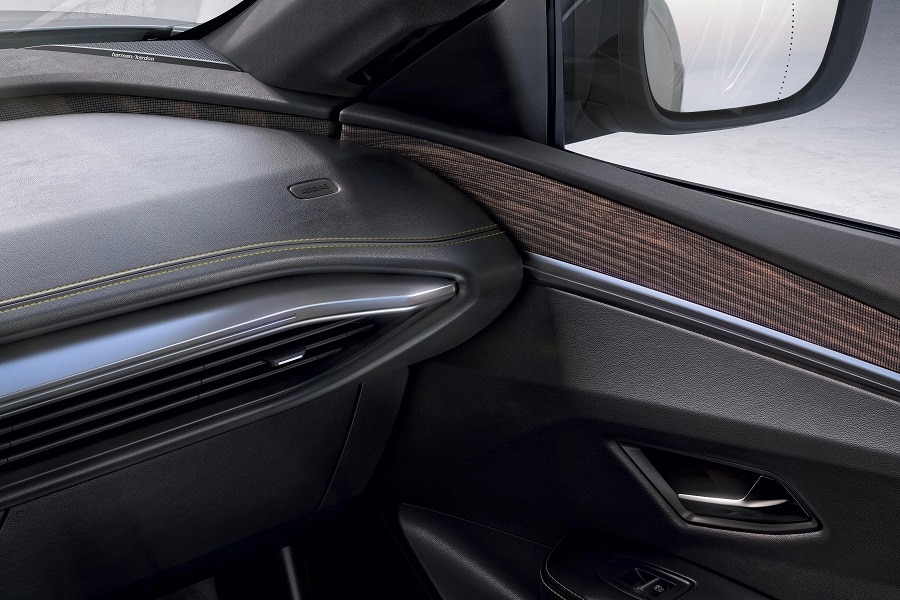 The rest of the dashboard and interior flaunts recycled materials wherever possible, many storage compartments and refined and elegant lines. The dashboard, for example, is covered in fabric on the access and medium versions, while on the top of the range it sports eco-leather. The audio system, on the top versions, is developed by Harman-Kardon, while you can opt for Alcantara upholstery or even in wood, Very elegant. The space available is, according to Renault, good both front and back, with a large trunk but the capacity of which has not yet been formalized. Then there is no shortage soft-touch controls on the steering wheel, of which we are fans from an aesthetic point of view, but not functional. On Mégane E-TECH we then see the debut on a Renault car of the paddles on the steering wheel to adjust the intensity of regenerative braking.

The mechanics of Renault Megane E-TECH: from 2022 two batteries, two engines and a completely new platform

Since we have mentioned the regeneration of batteries, let’s see what this electric Renault Mégane hides under bold lines and technological interiors. Looking at the data sheet, you can see how behind a seemingly familiar name is a flood of innovative and debut technologies for the Renault brand. An example? The extra-thin battery: it measures only 11 cm, 40% less than Zoe’s. To achieve this, Renault used one new chemistry for cells developed by LG. These are now cells NMC (Nickel Manganese Cobalt), capable of having one higher energy density and therefore to store the same amount of energy in a smaller space. 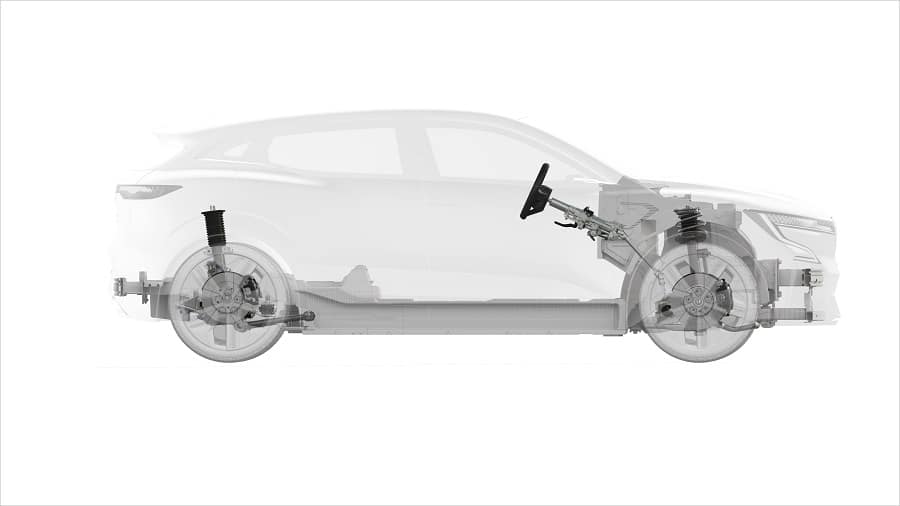 This small vertical footprint has allowed the car to be lower, staying within the meter and 50 in height and leaving even more space inside. More, the weight of the batteries (rather read, from 395 kg maximum) it is placed even lower, maximizing driving pleasure. In this regard, it will be Renault Megane E-TECH to bring the debut in 2022 new CMF-EV platform, dedicated exclusively to medium-sized electric cars. 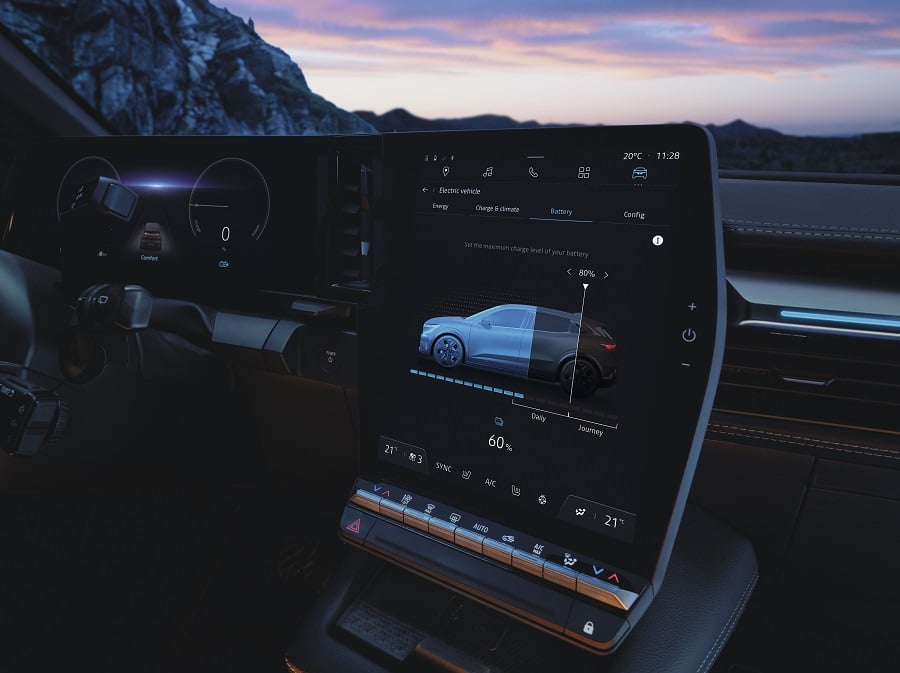 This platform integrates the batteries inside, thus allowing you to save weight, maximize torsional rigidity and overall dimensions.. The weight of the car is indeed quite content, with the heaviest 60kWh not exceeding 1600 kg empty. The location within the battery frame also improves the safety, which, as expected, is at the highest level. Both passive and active safety, with all autonomous driving systems capable of guaranteeing one autonomous driving of Level 2+, are at the top of the category. What about the performance of cars and batteries? Renault Megane E-TECH Electric will be available from 2022 with two battery cuts and two engines. 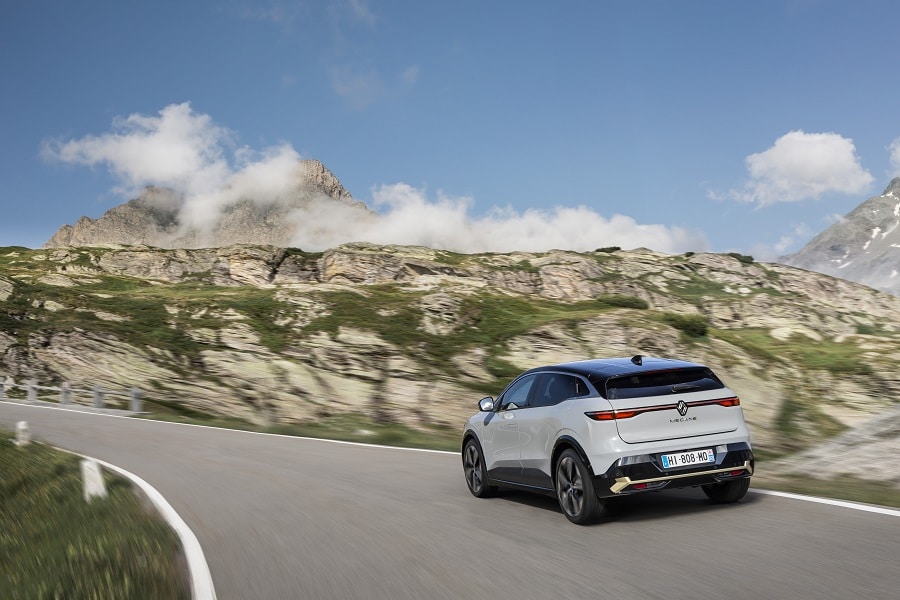 I engines, both of them anterior with front-wheel drive, they will be respectively from 130 e 218 CV, while the battery cuts will be from 40 and 60 kWh. L’autonomy declared for the version EV40, with a 40 kWh battery and only available with the 130 HP engine, it will be approx 300 km in mixed WLTP cycle. The version EV60 with only 218 HP engine, on the other hand, it will reach approx 470 km in mixed cycle. The performance instead they will definitely be brilliant, with one 0-100 km / h declared covered in 7.4 seconds for both versions (although we believe it is the result of the 218 HP version only). The maximum speed is self-limited to 160 km / h, while the charging reaches a maximum of 22 kW in alternating current, and up to 130 kW in direct current.

From March 2022 Renault Megane E-TECH will arrive in dealerships. And what happens to the old thermal Megane?

Now that we know the details of the new, renewed and revolutionary Mégane E-TECH, we just have to know price and arrival on the market. As for the price list, Renault still remained rather buttoned up and did not unbalance in forecasts. But we know that there will be three unprecedented levels of trim: Equilibre, Techno and Iconic. In terms of timing, however, interested customers will be able to order Renault Megane E-TECH from February 2022. Finally, the arrival in the dealerships is expected in March.

But let’s close with a question we asked ourselves just after seeing the new Mégane E-TECH: and the thermal one? Will it be replaced in its entirety? The answer is, surprisingly, no. Renault has indeed thought of make the transition more cautious and gradual …