Roguebook is a card-based roguelike developed by Abrakam Entertainment in collaboration with Richard Garfield, the creator of Magic, and in this review we will talk about it in detail

Roguebook is a card-based roguelike developed by Abrakam Entertainment and published by Nacon. By now it is possible to find really many video games belonging to this category, but this title manages to stand out thanks to a particularity. Roguebook was in fact developed with the help of Richard Garfield, the man who created the most famous trading card game in the world: Magic.

Given the presence of an important character like Garfield for sure many of you will feed many expectations against Roguebook and thanks to our review you can find out if the title actually manages to keep them.

Positioning is the key

Basically the gameplay of Roguebook is very similar to that of many other games of this genre. The fight takes place a shifts and every time it’s your turn you can play cards until you finish energy (mana) available. During your turn you can decide what to do calmly and you will also have the opportunity to observe in advance the moves of the enemies.

Overall, you can have a lot of cards in your hand at the same time, but at the end of each turn you will be forced to discard them all (with some exceptions) and a draw again 6. This will lead you to quickly consume your deck, but luckily in that case you just need to shuffle the discarded cards inside it.

So far the game seems to be a card roguelike like any other, but that’s because you don’t know his yet mechanics linked to positions. Every time you start a game of Roguebook you can in fact create a party consisting of 2 heroes (which we’ll talk about later) and theirs positioning on the battlefield will greatly affect your encounters. In combat in fact only the first character in your party will take damage, thus protecting the latter. In addition, there are many cards and artifacts (items that enhance your heroes throughout the game) that they possess additional effects based on the hero’s position who uses them.

During the clashes you will not be able to move your characters freely and to do so you will have to rely on card effects. Many cards in fact have a yellow arrow symbol which indicates their ability to make heroes move. The mechanics are really very interesting but unfortunately the symbol is only visible if the character is actually able to move. For example, if a hero is already on the front line and you have a card in your hand that can advance him, the movement effect will not be reported. This lack of clarity is a serious problem during the first few games since, unless you have memorized the card effects right away, sOften you will end up making easily avoidable positioning errors. 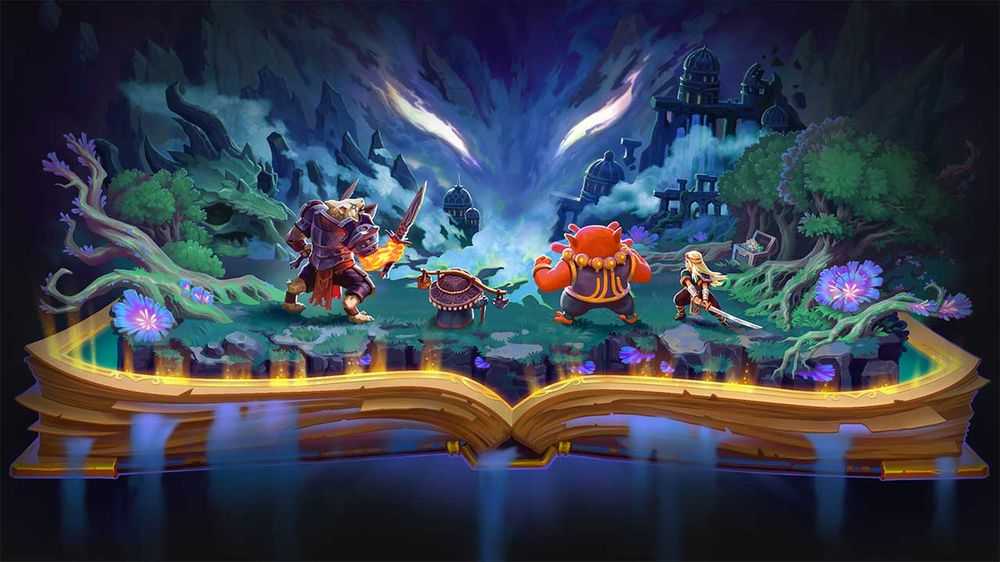 The Roguebook is a particular cursed book that contains within it a large number of different worlds and stories. This mysterious artifact hides all kinds of dangers inside and, as if that weren’t enough, it is also able to trap people from the real world. In the course of the game, in fact, players will be able to control a party consisting of two of the four characters who have been trapped in the book: Sharra, Sorocco, Seifer e Aurora.

These heroes are very different from each other and are based on unique card types and mechanics. For example, Sorocco specializes in defend allies from attacks and using powerful cards that are very expensive and powerful, while Seifer prefers to fight by summoning powerful demons and upgrading his cards thanks to the mechanic of anger.

Since in each game you will have to control 2 different heroes, your deck will consist of cards belonging to both. This will allow you to build a deck based on very interesting combos that bring out the best in each character.

A World to Color – Roguebook Review

To complete a Roguebook game you will have to beat the bosses that are hiding at the bottom of each of the three randomly generated levels that you will have to face. These powerful enemies will be tackled right away, but to be able to beat them you’ll have to explore the area properly in search of upgrades. In fact, in every level it is possible to find new cards, artifacts, gems, extra energy, gold and even scrolls able to unleash events very different from each other. In addition there are also a large number of optional battles that if you complete they will reward you with very useful items.

All these treasures, however, will not be accessible immediately, given that in Roguebook you can only explore the colored boxes of the book. At the start of each level, the explorable area will be extremely small, but luckily you will have a set of Usable brushes to paint the area around your character. These items, however, are limited and consequently in each level you will have to reason to find the best place to use them.

This exploration system is really a lot of fun, as it forces players to weigh your actions well everytime. Sometimes it is convenient to eliminate all enemies to get as many resources as possible, while in other cases it may be wiser to face the boss immediately to avoid taking unnecessary damage. In this way exploration is always very engaging and does not risk boring players after a large number of games. 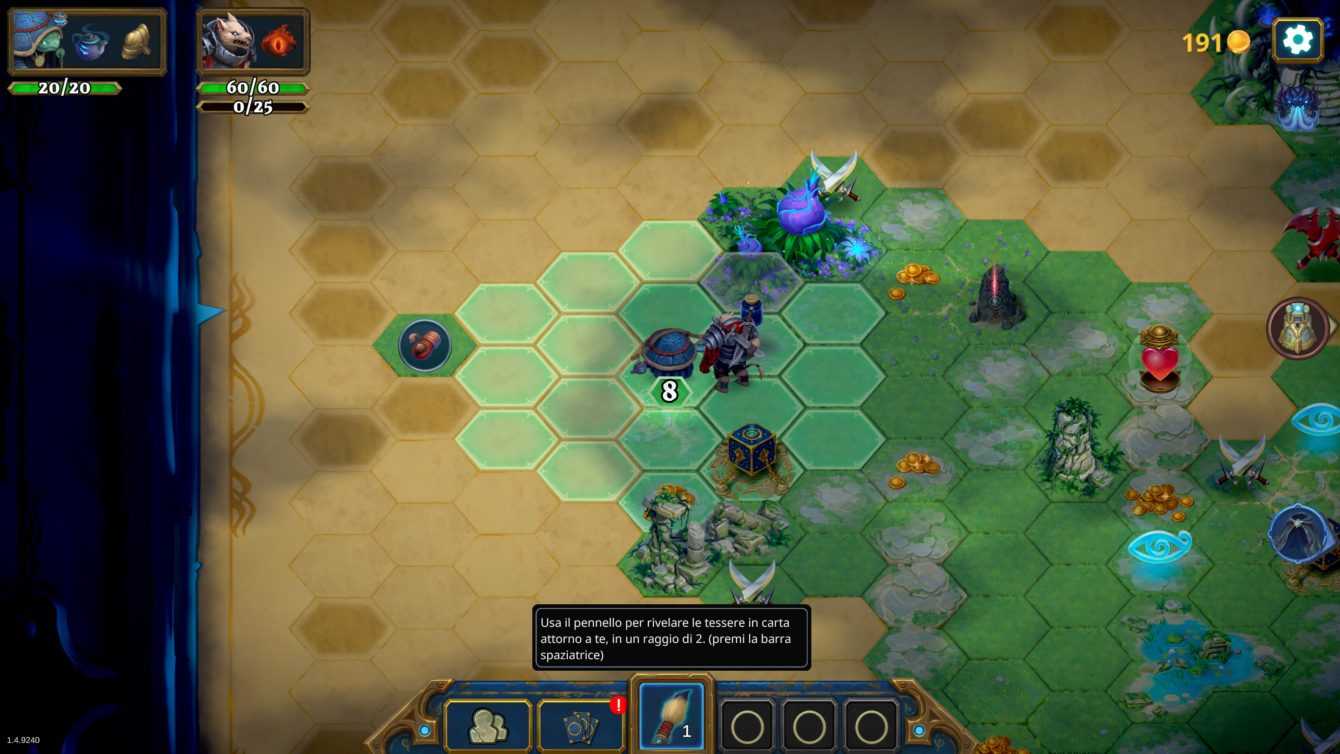 Like any self-respecting roguelike, Roguebook also features several unlockable content at the end of each game. As you progress through the levels you can in fact gain experience to unlock new items and new hero cards. Also later you can also use the book pages found while browsing to unlock various benefits. For example it is possible increase the number of treasures and artifacts present in a level, or simply improve statistics of some characters.

By completing a game you will certainly be able to collect a good number of pages, but to get a lot of them you will have to resort to epilogy. Epilogues are nothing but gods modifiers unlockable after your first win which will allow you to make subsequent runs more difficult and profitable. Initially, you can only choose one at a time, but once you have completed enough you can activate several at the same time.

The idea of ​​the epilogues is very nice, but unfortunately these additional challenges are not varied enough to entice players to tackle them. In fact, in most cases it is simply the removing or adding elements from layers. Furthermore, even the unlockable bonuses with pages are not very interesting and some players may not be tempted to get the more advanced and expensive ones. 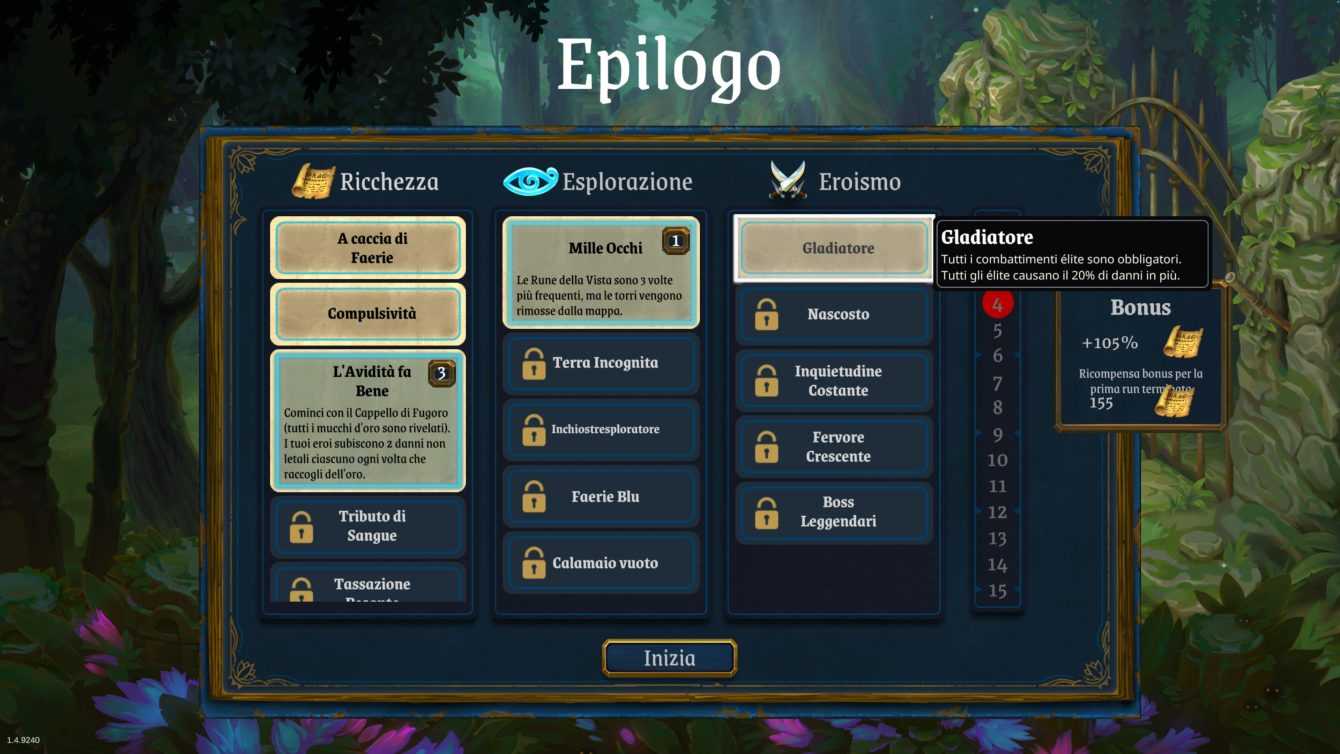 From a technical standpoint there isn’t much to say about Roguebook. The game is very light and therefore manages to keep some good performance even on less performing PCs. In the course of our test we also only came across some occasional bugs which did not affect our experience.

For what concern artistic side instead the title left us very satisfied. The backgrounds, settings and characters are really well cared for, and are based on a splendid artistic style that very reminiscent of the one used for storybook illustrations. What struck us most, however, were the beautiful artwork present on all the cards you will find in the game.

Unfortunately, Roguebook suffers from a problem that specifically affects us Italians: translation. In fact, the Italian translation of the game is poor to say the least and even in some cases it will not allow you to fully understand the effects of some cards. 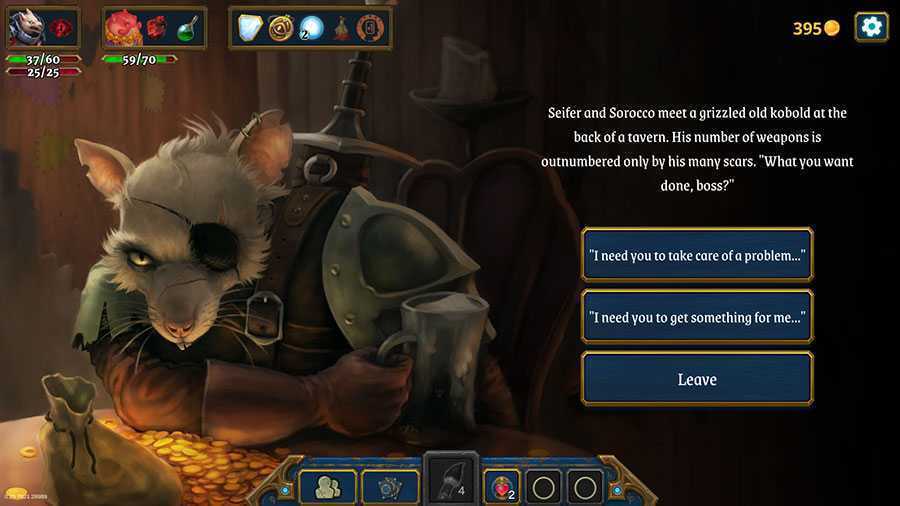 Now the point of our review has finally arrived where we take stock of Roguebook. Richard Garfield’s new roguelike has many very interesting elements, such as positioning mechanics and tactical exploration, but unfortunately fails to stand out in the midst of other similar games.

Card combos are quite varied, but once you understand which ones are the best you will end up using only those. Also, since the new unlockables at the end of each game aren’t very interesting, you may quickly end up losing interest in the game. For sure if you are a lover of card games you will have a lot of fun completing the levels of the Roguebook, but certainly you will not find yourself in your hands a new masterpiece of the genre.

Roguebook is available now for PC and later will also arrive on PS4, PS5, Nintendo Switch, Xbox One and Xbox Series X | S.. If you are interested in staying up to date with all the news on the world of video games and much more, then continue to follow us here on TechGameWorld.com. Furthermore, in case you want to buy some games at an advantageous price, we suggest you take a look at the many offers on Instant Gaming.