In this review we discover together Rollerdrome, a frenetic third-person shooter created by Roll7, available only on PC and PlayStation console

Rollerdrome, presented during the State of Play of the last Juneis now available on PC e PlayStation. From the development studio Roll7well known for OlliOlli, comes the title that unites the world of roller with that of shooter in third person. The formula, very convincing, works great. The main task of the gamer is to overcome the levels full of enemies unscathed, scoring the highest score and progressing to climb the summit. Let’s find out together in this Rollerdrome review.

The game is set in 2030a parallel future that of futuristic it has very little in reality (it looks a lot like the seventies). With the multinationals which have now taken control of every aspect of society and the economy. To make sure that the population does not notice the situation, the company Matterhornone of the most powerful companies in the world created the Rollerdrome. And very violent and bloody sport, in which the best athletes fight to get out alive from arenas full of armed opponents. We can call ourselves moderns gladiators to understand, but instead of swords, shields and whips we will use roller skates to perform spectacular stunts, guns and rocket launchers.

In the first moments of the game, after completing the tutorial, we will take on the role of the protagonist, Kara Hassanarrived in the professional circuit to emulate the footsteps of her hero, Morgan Fray. While our outsider Caspar IckxPronta is willing to do anything to make us sweat the coveted title of champion. We will have to climb the peaks of the competition up to its final stages to get out of it campionessa, this is the sole purpose of our avatar, who strangely does not intend to become a revolutionary ready to change the situation in the world. We will be able to find out much more about Kara and the other characters thanks to a story mode.

While calling it history is wrong, the plot is quite mix and the focus is more on gameplaywe will be able to explore the areas outside the gaming arenas, we can find and read documentsto try to understand the mechanics that make up this new sport and all maghegi that are hidden behind it. 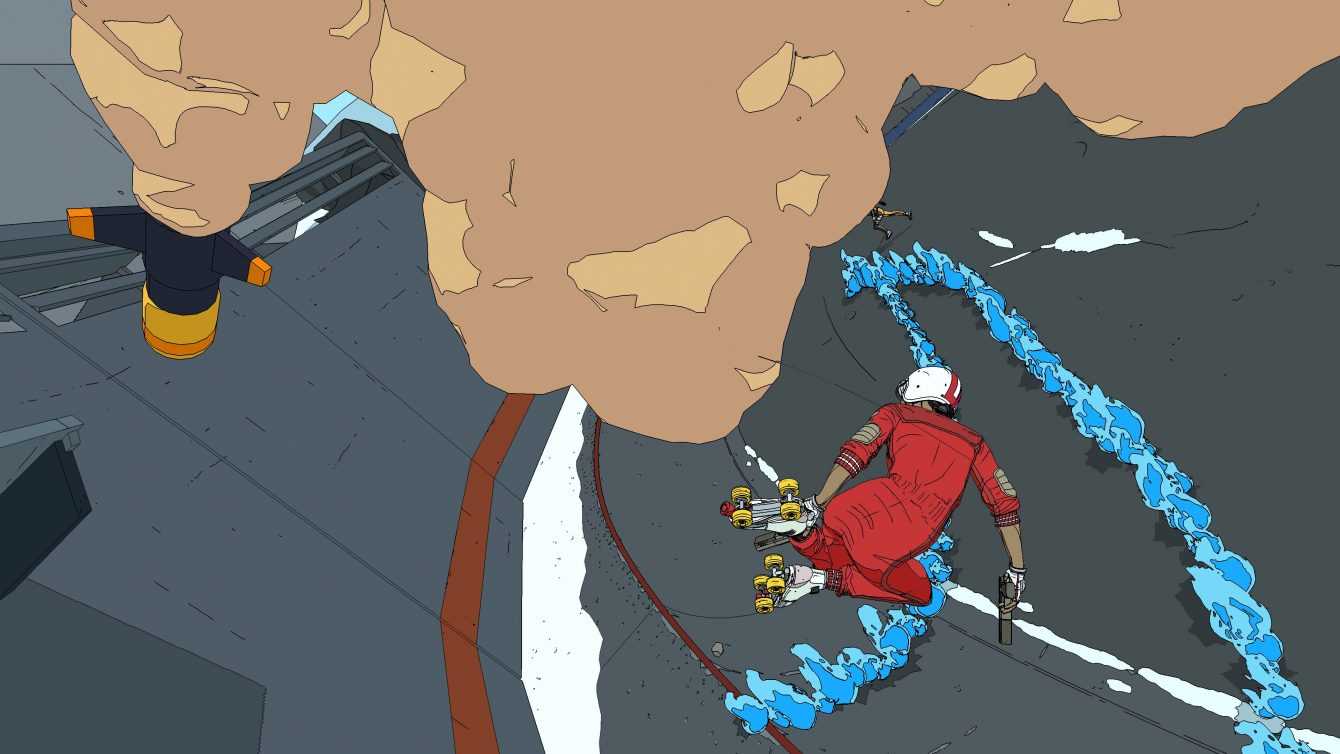 Pad in the hand performs very well. In the version PS5, that we had the pleasure of trying, the feedback aptico he made himself heard. The mobility that the skates provide to the protagonist is incredible, it allows us to perform tricks and moves beyond all imagination, especially useful for recovering ammunition and defeating enemies. If the plot, however bland, it turns out to be pleasant, the bulk of Rollerdromeobviously its gameplay, which in no time capture the player, as simple to understand but difficile to master. The game level increases in difficulty each time you advance to the next stage. If you really have difficulty, Roll7 adds some facilities, such as the reduction of damage suffered or the inability to die. In our opinion, it ruins the experience a lot.

As for movement and tricks, it all comes down to using very few keys: once we have started to move with the left stick it will not be necessary to keep it pressed forward because the advancement will be automatic and we will have to limit ourselves only to directing ourselves. 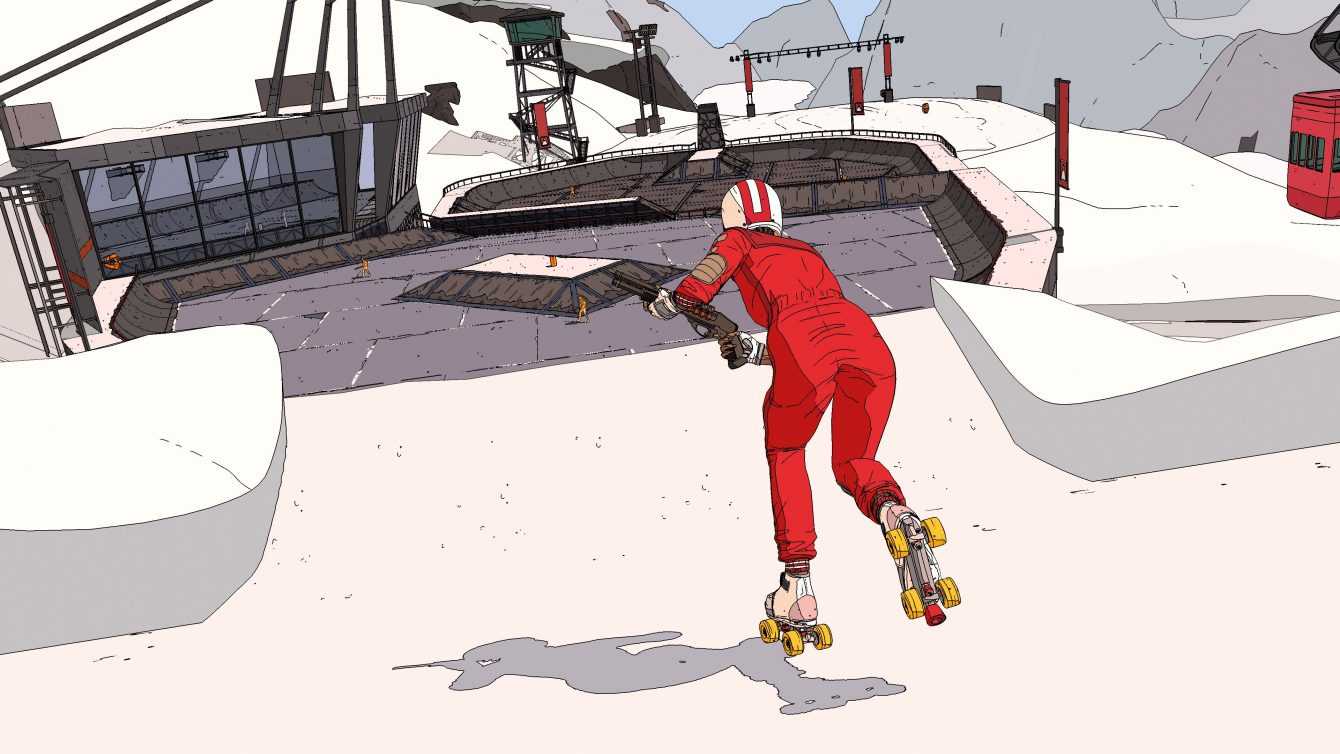 I trick they are very simple to perform and can be exercised with just one press of the button R1 e Squareallow us to accumulate score to progress through the different ranks of the tournament. Also contributing to the recharge of the ammo bar, unique for all four guns. Occasionally we will press L1 for some particular techniques of descent, they can in fact be exploited ramps, walls and handrails to jump. It is also impossible fall and get injuredeven performing tricks without the right timingthe game does not involve falls or collisions.

Also it shooting it is very basic: four weapons available to be selected by pressing a single directional key, automatic aim in proximity of targets, L2 for Bullet Time (You can slow the passage of time to your liking, useful while in the air and to make sure you hit an enemy with a barrage of bullets). While R2 to make fire; each weapon has specific mechanics, such as the “Heavy Shotgun” which will fire a critical shot if fired with the right timing. In short, we will only have to run around the various arenas killing enemies to recover Salute and run tricks and dodges to reload ammunition. 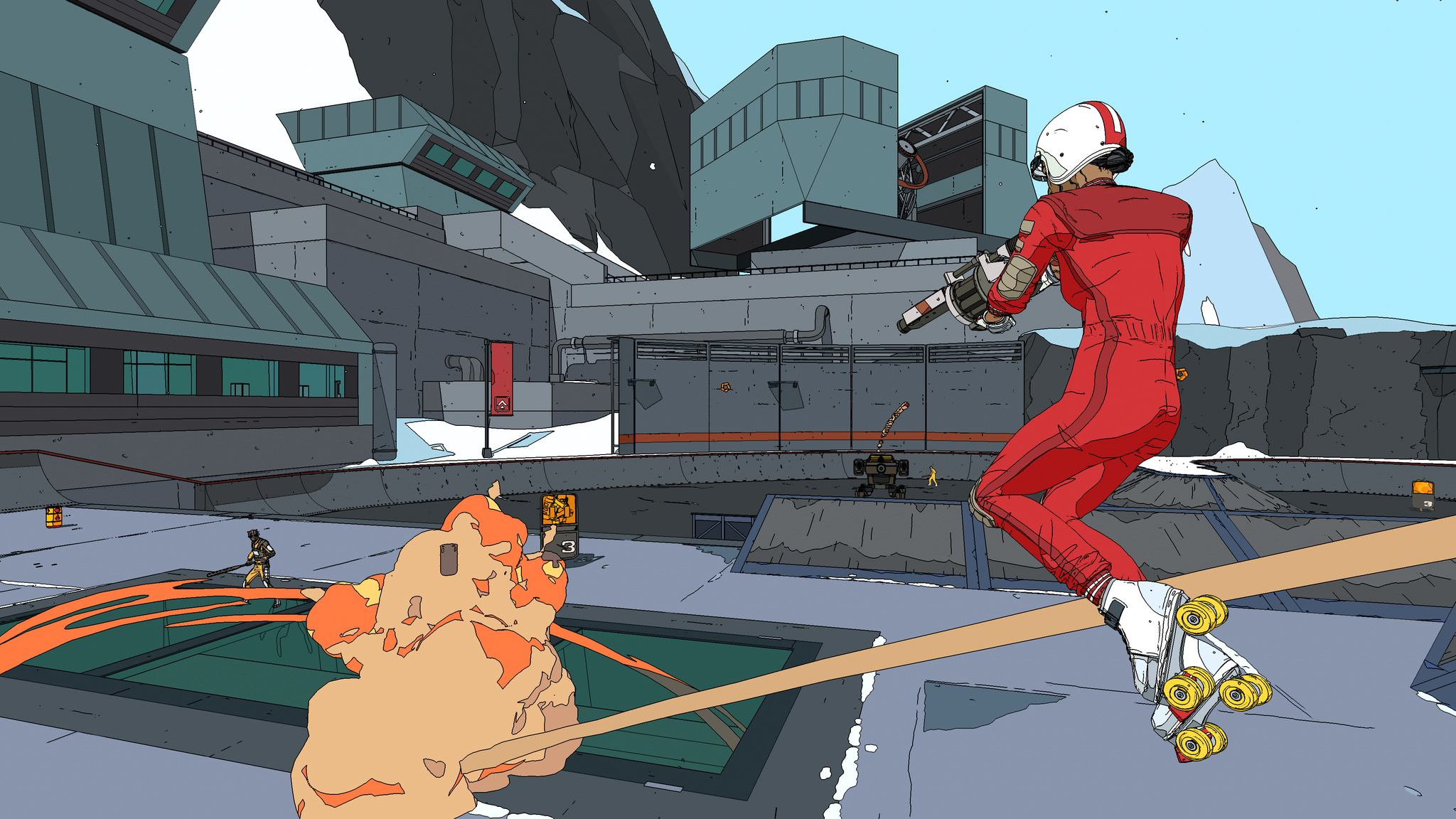 The campaign composed of 11 arenewhich can be completed in a few minutes, however much they are replayable, so you can climb the global leaderboards and complete challenges. After completing the entire campaign, you will be able to play the “Thirst for blood“, Which consists of a few words in a remix of the basic levels, proposed to a difficulty higher and with a greatest number of opponents, testing our skills. In our opinion, a somewhat elementary way to lengthen the broth, maybe we would have appreciated the presence of time trialsraces based on trick or face gods boss in addition, given the little presence of them in the main campaign.

The whole progression system is based precisely on carrying out certain challenges within each level. Challenges can vary between performing a certain trick, collecting Combo Tokens e Trick tokens, eliminate enemies using a specific weapon and more. The chapters are organized like this: 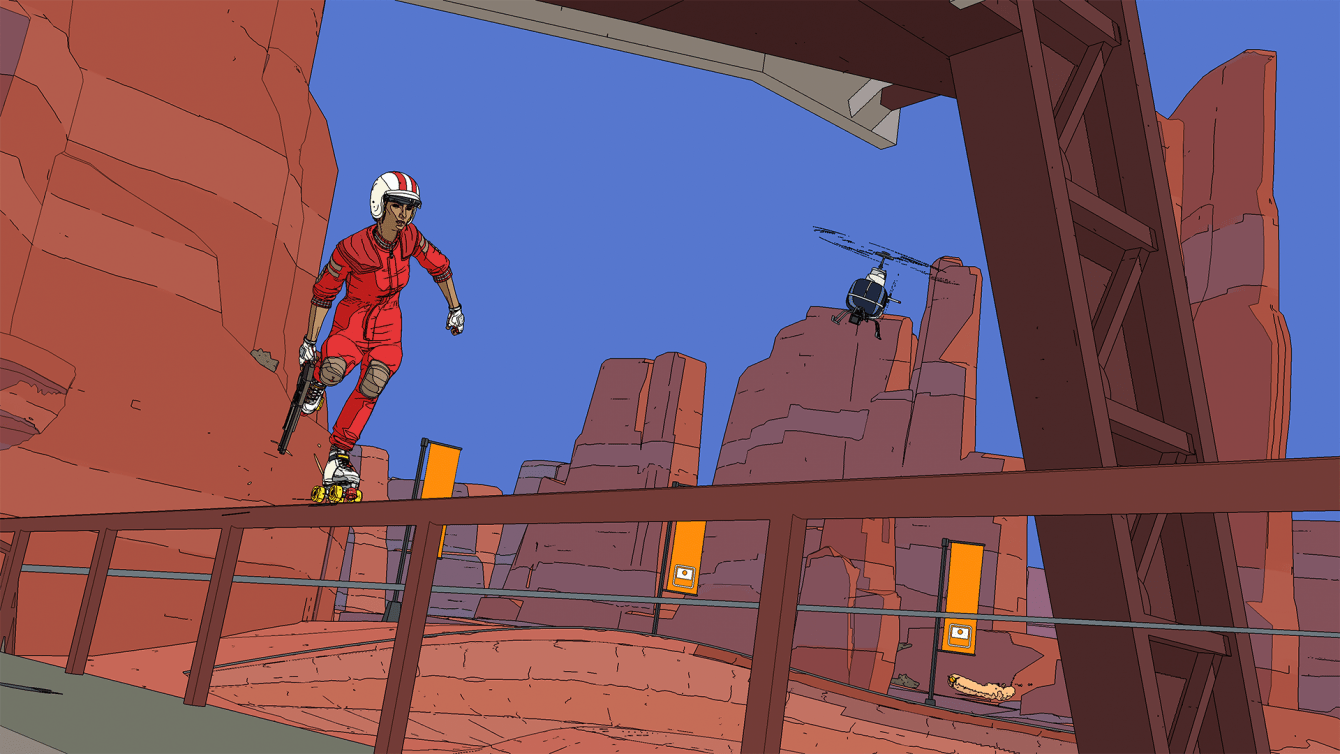 Retro on the go – Rollerdrome Review

the graphic style of Rollerdrome is really particular and immediately comes to the eye. Just look at it for a few moments to be captivated, the style is inspired by the comics of 70’s. Rollerdrome isn’t just a great game to play and have fun with. In our test I had no frame rate issues and the experience is smooth. Thanks to a graphic realization in cel shading, resulting in a perfect choice.

The level design well done, except for the enemies. Even the clashes are decidedly less inspired than everything else under the artistic side The soundtrack deserves to be mentioned, with songs and sound effects made to the great. It is not new, in fact over the years the soundtrack of video games have become beautiful. 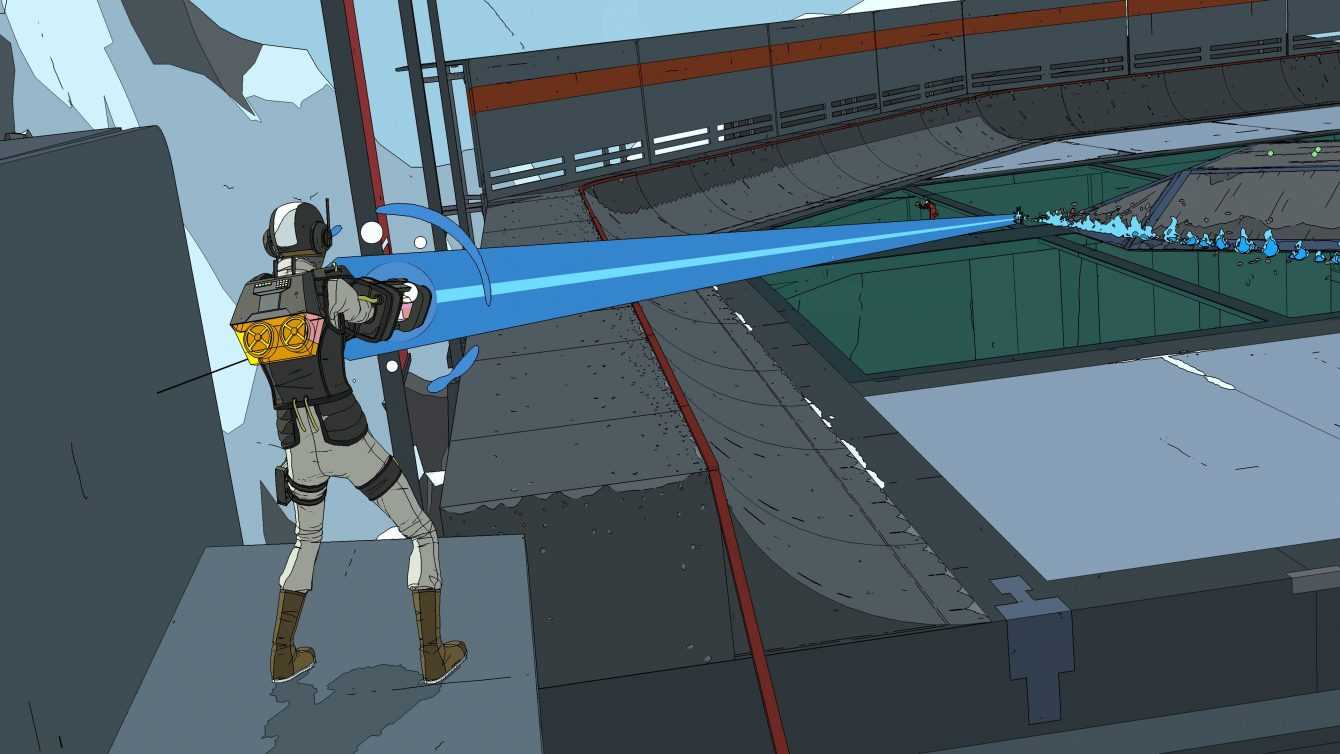 Rollerdrome it was a pleasant surprise, Roll7 tries to reinvent itself once again the videogame genre of extreme sport, replacing the skateboard with rollerblades. It does not lack some flaws, from the campaign that doesn’t have much to say in terms of storytelling and longevity, to the lack of bosses and poorly curated enemy graphics. Obviously it aims for great replayability.

Pad in hand, Rollerdrome proves to be solid, technical, stylish and demanding. Affordably priced, available now for PC, PS4, PS5, will be able to entertain you at this time of summer. In case you want to buy some games at an advantageous price, we suggest you take a look at the many offers on Instant Gaming.

What do you think of this new Roll7 adventure? Let us know below in the comments. Don’t forget to follow us on our Instagram page, on all our other social networks and to stay connected on TechGameWorld.com.

Skates and guns in retro sauce