Let’s find out together, in this long-winded review, to whom we can really recommend Shin Megami Tensei V, the latest work by Atlus exclusively released on Nintendo Switch

It is very likely that, without any fault, even if you have played Persona 5, you have appreciated and praised it like anyone else, you do not know the Shin Megami Tensei series, which is its progenitor. Persona is in fact a spin-off born from a coast of the Atlus series that has had the immense fortune of having a greater appeal in the West, probably thanks to a more charming artistic style and plots based on themes certainly with a strong social impact, but narrated from the point of view of a group of teenagers. For its part, however, Shin Megami Tensei has always proved to be a more niche franchise, anchored to an audience of more hardcore gamers and devoted to grinding, to the deliberately classic JRPG mechanics and, finally, to decidedly more philosophical themes and less anchored to reality.

In short, two different worlds, which however collide at different points of contact, without ever merging in any way. And let’s admit that talking about Shin Megami Tensei V, after more than seven years from the European release of the previous chapter, in a videogame world definitely not used to this kind of productions is not very easy. To cushion this sense of suffocation comes the success of Persona 5 Royal, which inevitably made the new chapter of the “mother” franchise one of the most anticipated titles of the year even by people who, paradoxically, had no idea what they would be playing. After spending several dozen hours in the world of Shin Megami Tensei V, we sat down at the PC and started writing this review: it won’t be easy, but it will be worth it.

Clashes between divinities, apocalypse, religion, demons, angels: take all the topoi that the Japanese have always been fascinated by, mix them with grace and a lot, a lot of research, and you will get the base of “lore” by Shin Megami Tensei V. If in a purely philosophical and not very concrete setting, at least from what it would seem in the very early stages of the game, insert a group of high school students who find themselves embroiled in a mess bigger than them … if you are a fan of the franchise you will definitely feel at home. Our (again, damn the Internet) anonymous protagonist finds himself returning home with a small circle of companions: Tao Isonokami, Yuzuru Atsuta and his sister Miyazu. On the way to the dormitories, inside the subway station, the group finds themselves involved in one of the many crimes that is shaking Tokyo and, due to a series of unfortunate events, as they cross the Takanawa tunnel, the world changes.

The protagonist wakes up in a desert land, one Tokyo completely different from the usual one, distorted and destroyed from the ground up. Attacked by strange demonic creatures, his only way out seems to be to make a pact with “Aogami”, a mysterious being who offers him both a physical and an objective fusion. Therefore, being unable to do anything else but accept, from their union the Nahobino, a being as legendary as it is powerful, who can and must change the fate of the world. Besides, of course, finding out what the heck happened in Tokyo. 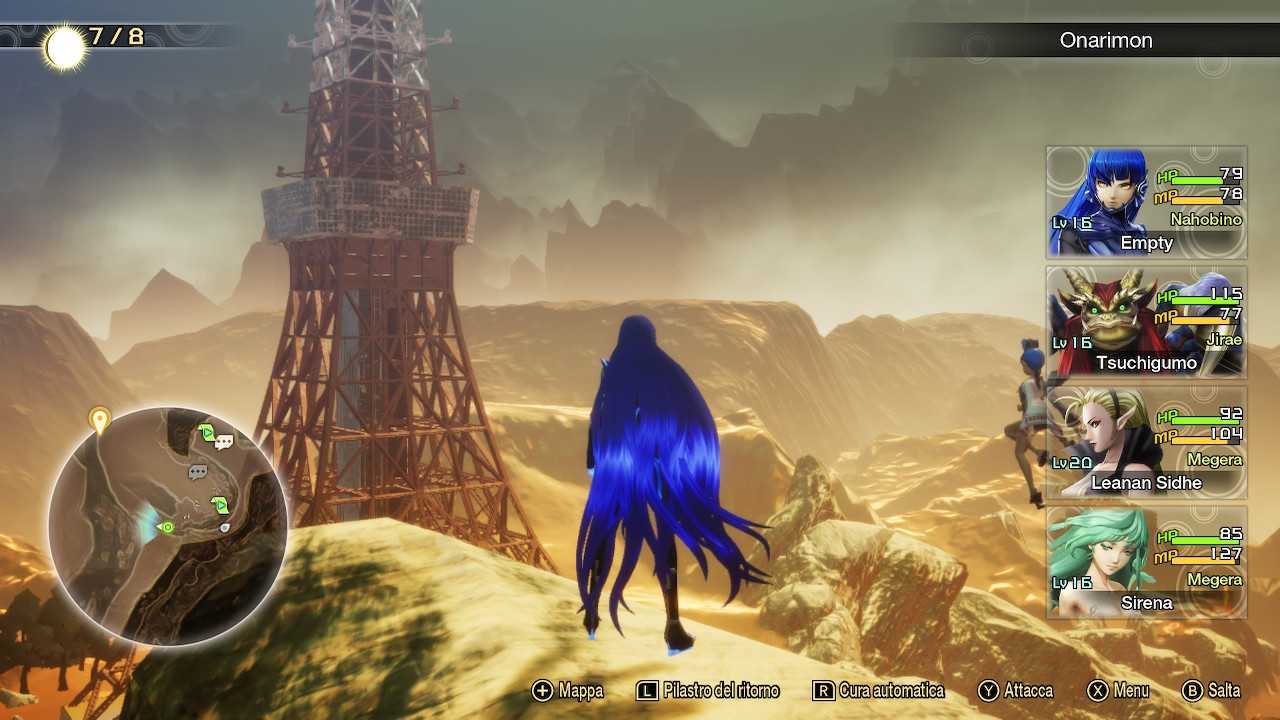 We don’t want to spoil anything of the plot for you in any way, so we stop here, but know that it really is the only tip of the iceberg. The narrative line chosen by Atlus for this Shin Megami Tensei V touches rather strong and pressing themes even in today’s world, from the concept of religion that clouds the mind of the common man, to that of dictatorship, segregation and classism. What we have been able to notice, however, is that unlike the previous chapters and in particular Shin Megami Tensei III, the developers seem to have been a little more shy in addressing these issues. As said at the beginning, usually the Shin Megami Tensei franchise has always aimed at an overly mature and refined narrative, exploiting a lot of religious and dogmatic archetypes which, if not deepened through some separate research, could often be difficult to understand.

This was not the case in this chapter, unfortunately, because although the more “loristic” structure of the title, full of interesting curiosities and food for thought for each of the creatures that we will face, for example, the narration of game events lacks bite and, let us pass the term, “heaviness”. And although, in this way, it may actually seem a merit in the review, in reality it is one of the very few factors that we regret to highlight in Shin Megami Tensei V, guilty of having removed that part of pure narrative “fetish” from all fans of the first hour of the franchise. 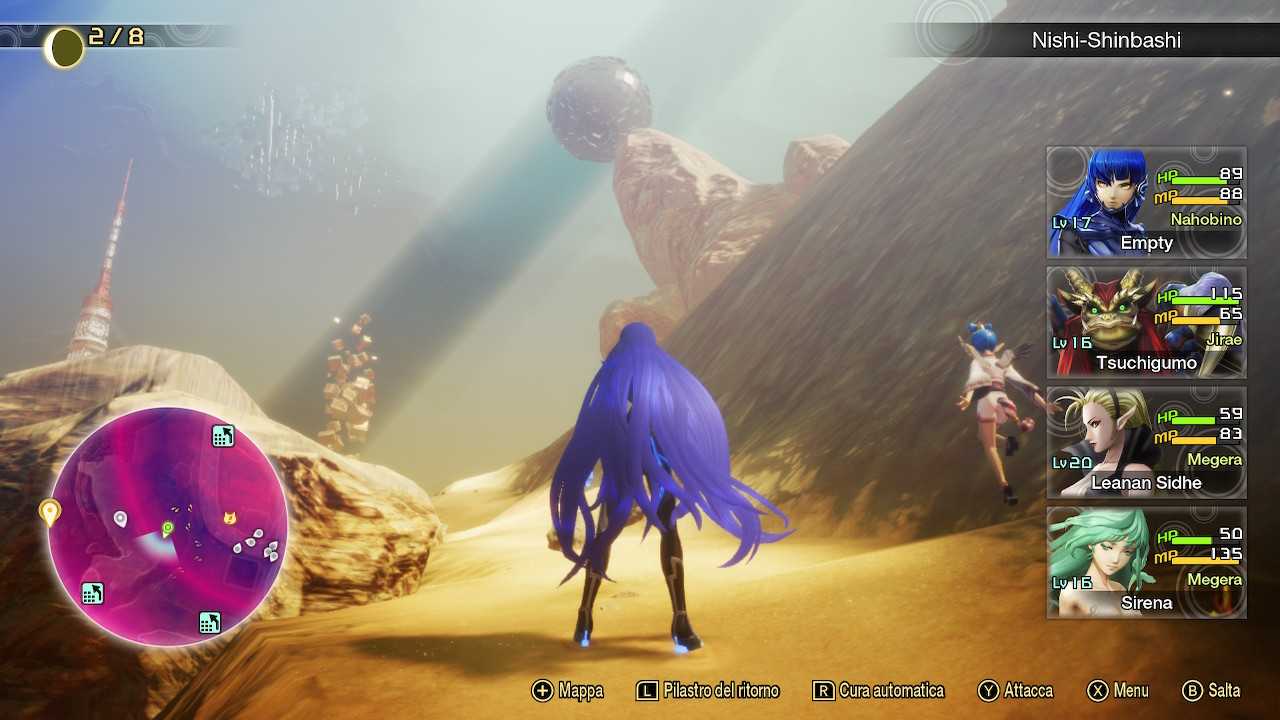 Exploration. One of the keys to the gameplay of the chapters of the franchise has always been the possibility of exploring maps, more or less large, but all connected to being strictly “dungeon”, labyrinthine and full of puzzles. With Shin Megami Tensei V, on the other hand, Atlus has reversed this course, giving the game a gigantic and articulated set of open maps to explore both horizontally and vertically. The classic puzzles have therefore been diluted within the various maps, with treasures and collectibles everywhere. Each collapsed bridge is an opportunity, not a hindrance.

In fact, scattered throughout the maps there will be, as mentioned, a series of treasure chests, represented by gigantic golden geoids to be destroyed with a sword stroke of the Nahobino and that hide a great variety of objects, from those that are used for the simple recovery of HP and MP to those of elemental and non-elemental attacks. In addition, in various hidden points you will be able to find the Miman, little red men that Gustave, the owner of the game shop Il Covo del Coravere, collects and for which he will reward you with Essences and special objects. Let’s find out shortly what the Essences are, let’s go step by step. 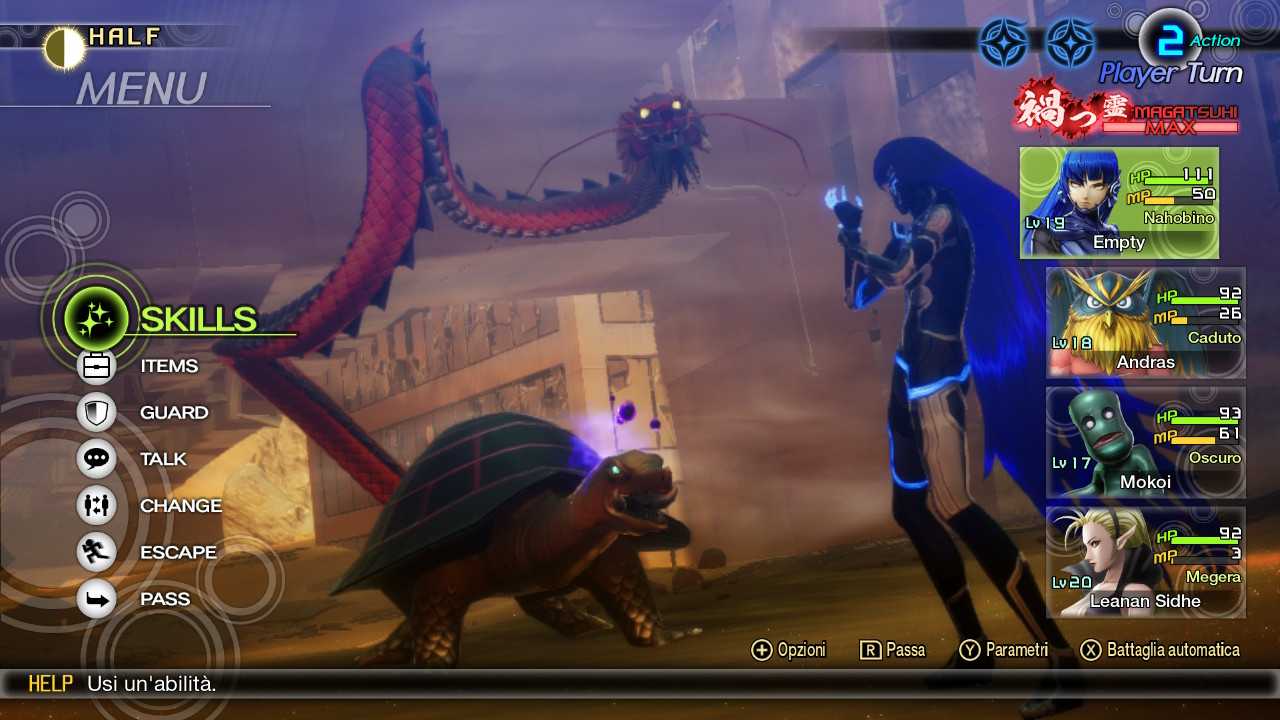 In the game world we will also find numerous “friendly” Demons who will entrust us with secondary missions of various kinds, from the simple recovery of objects to the fight with rather formidable opponents. All tasks that, if apparently they could seem literally “secondary” and devoted to the simple extension of the ever-eternal soup, in reality have two very specific objectives. The first, more romantic, is that of deepen and enrich the creatures that populate Shin Megami Tensei V, also often offering interesting points of reflection. The second is more technical and underlines a fundamental aspect of the title: the difficulty.

If you decide to approach Shin Megami Tensei V (as well as his entire franchise in general, actually), don’t think you are entering the world of any Persona. The difficulty level of this fifth chapter is in line with the previous ones, resulting quite high even at Normal. Over and over again we found ourselves losing several hours of gameplay due to a random clash gone wrong, against a miniboss maybe met by chance. In general, Shin Megami Tensei V requires a certain degree of dedication to grinding and completing all the secondary tasks that the developers will make available to the player: the penalty is bumping into one of the many walls that the bosses will put in front of you on a regular basis. . 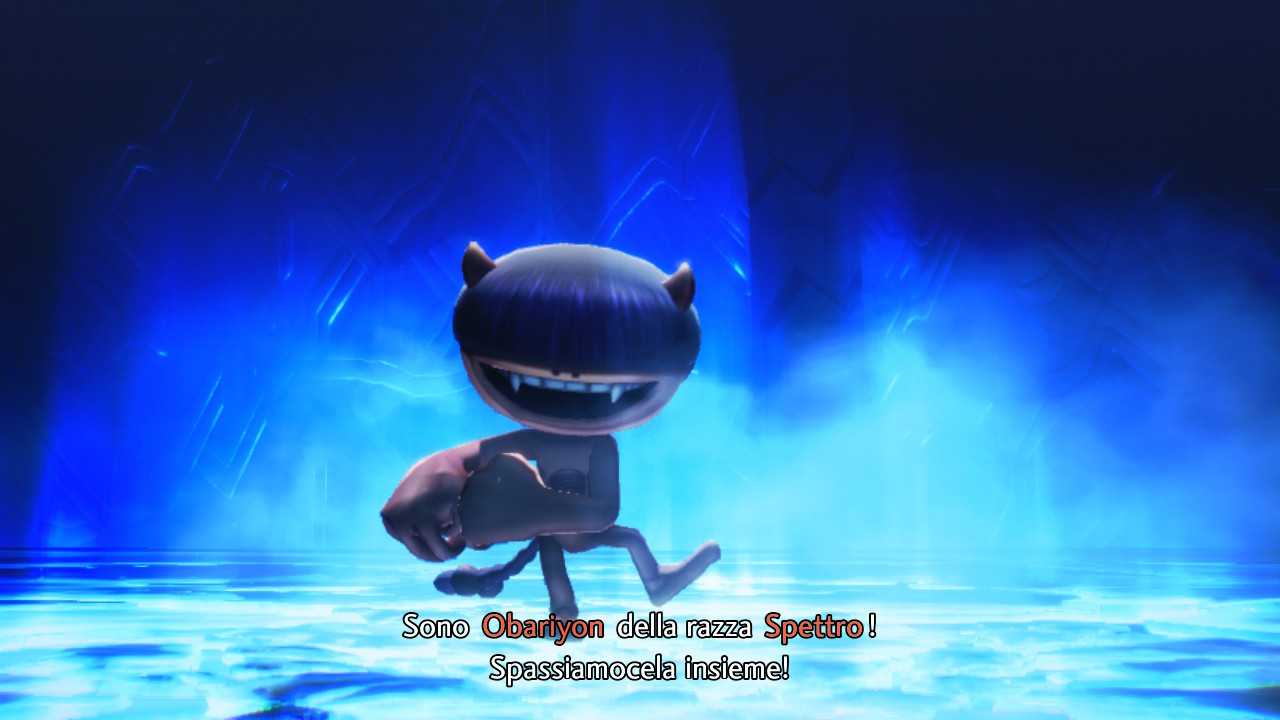 Fights. The second step of Shin Megami Tensei V’s gameplay that we want to analyze in this review is its combat system, which also in this case has been modernized in some aspects compared to the previous chapters. If, basically, we still find ourselves faced with a Classic turn-based JRPG, with its own system of weaknesses and resistances already well known to fans of the series (including Persona, in this case), on the other hand Atlus has tried to modify some details to make everything fresher and more usable. Although, as already mentioned, definitely not simpler.

The clashes were enriched, for example, by the barra del Magatsuhi, a red indicator that you will find at the top right of the clashes and that will fill up as the turns pass or after particular events and choices. You can also fill it by collecting the red orbs scattered throughout the maps, which you will often find together with the green ones for HP recovery and yellow for MP. This new indicator, once filled, allows you to use powerful abilities that could turn the tide of a battle that went down the drain in just a few bad moves. For example, you can unleash powerful single attacks, heal your party or take advantage of the basic ability of the Nahobino that allows you to transform any type of attack you unleashed in that turn into critical, be it physical or magical. Be warned though: Magatsuhi abilities can be used equally by enemies.

Negotiations with the Demons have also changed slightly. As in every chapter of the franchise, in fact, in Shin Megami Tensei V you can (and must) welcome among your ranks the demons you will meet throughout history. Your team will therefore be quite changeable and only in the final stages of the game will you be able to choose a definitive one. This is because, quite simply, the Demons will have rather limited growth in terms of new abilities and power. We have pleasantly noted, in this fifth chapter, that Negotiations with hostile creatures are less expensive in terms of disposing of items, HP, MP, or in-game currency. Furthermore, once large quantities of Macca or objects of a certain importance have been sold, it is practically impossible for the demons to flee and steal the loot, something that instead could often happen in the previous chapters. 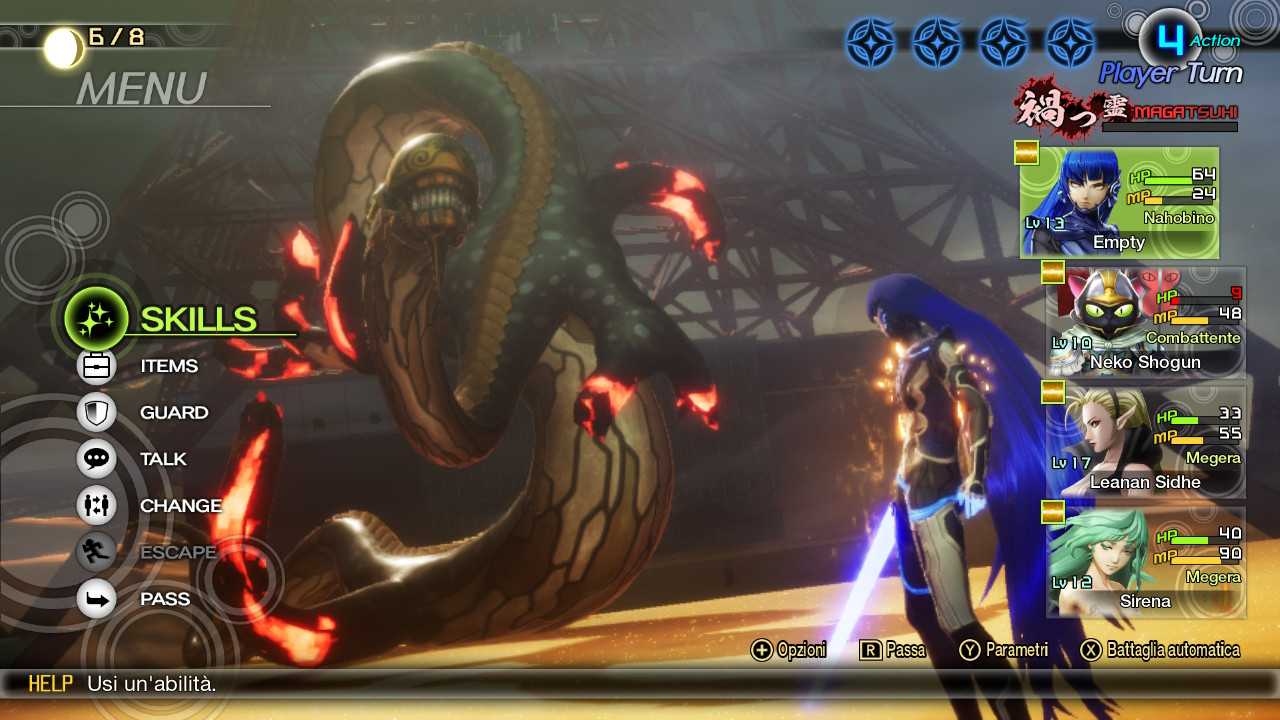 Growth. Through the Energy Sources scattered in the game maps, places that act as rescue and teleportation points, it is also possible to access both the Den of the Corpse of Gustave, which we have mentioned in this review, and the World of Shadows, place of physical and spiritual growth of the protagonist of Shin Megami Tensei V. This is because, although the demons as we have said before, have a limited growth and must often be replaced, the same does not apply to the Nahobino, which has literally infinite possibilities of customization thanks to the combination of Essences and Miracles.

Let’s start with the latter: i Miracles are buffs and power ups unlockable for the Nahobino through the use of Glory points, obtainable to a lesser extent by finding the positions of the Mimans, and in greater concentration by finding the Amalgams, rarer and even less accessible than the Treasures. Through the Miracles it is therefore possible enhance the Nahobino through secondary skills useful in the various moments of battles, from the accumulation of Magatsuhi, to the negotiations with the other demons, up to the improvement of the magical and physical abilities of the protagonist.

Flic Twist: Here is the dial button that lets you control home 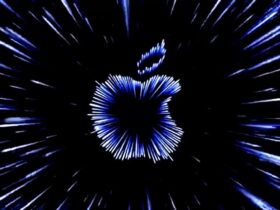 Samsung ISOCELL Auto 4AC: this is how the company imposes itself in the automotive sector