Do you want to improve your game in Splitgate, but don’t know how to do it? A solution for you would be to read this guide, in which we will present a tier list-style ranking of all the best weapons (ranged and melee) of Splitgate, ranking them from best to worst.

It dates back to the last July 27 the launch of Splitgate for Sony and Microsoft consoles. Also finally going out for PS4, PS5, Xbox One e Xbox Series X|S, the free-to-play FPS developed by 1047 Games has managed to dramatically expand its user base (as opposed to the original launch for PC in 2019, a period during which the game struggled to find a constant and substantial playerbase) , reaching the record of ben 600 000 download, and causing server problems for some time.

With the arrival of the console beta, the developers have decided to launch the first season of Splitgate, technically called “Season Zero”. With it came several news for Splitgate players, and with this guide we will try to give you ours advice on the best weapons that you can find in the various maps during this season, hoping to be able to help you decide which is the most suitable style of play for you. Having said that, we just have to start with ours tier list.

Rank S: the Rocket Launcher, the BFB, the best weapons you can find in game

For what concern Rocket launcher the speech for it is a lot simple. As per standard, the rocket launcher fires projectiles that travel in a straight line and explode on contact. Although the ammunition is only 4, it will be far enough for you to reach your goal, that is eliminate as many enemies as possible. In fact, the rocket launcher is the only weapon in the game capable of killing with one shot even if it is not aimed directly at the enemy body. In fact, just shoot on the floor or on adjacent walls to opponents to eliminate them. This makes it one of the best weapons in Splitgate (possibly even the best), along with clearly the one that follows.

For non-Spligate players, there is an explanation of what it is BFB: it’s about a melee weapon, to be precise a baseball bat with a particularly futuristic design. Gamers who are familiar will probably wonder why to include a melee weapon among the best weapons in the game, and the reason is obvious: in addition to having a single shot that results most of the time in a one shot one kill, there is it is also it click which allows you to get close to your opponents from a long distance. So imagine walking around the map, sling you on the first enemy that comes within range and kill him with a single blow: In addition to being a very effective tactic, it is also tremendously fun. 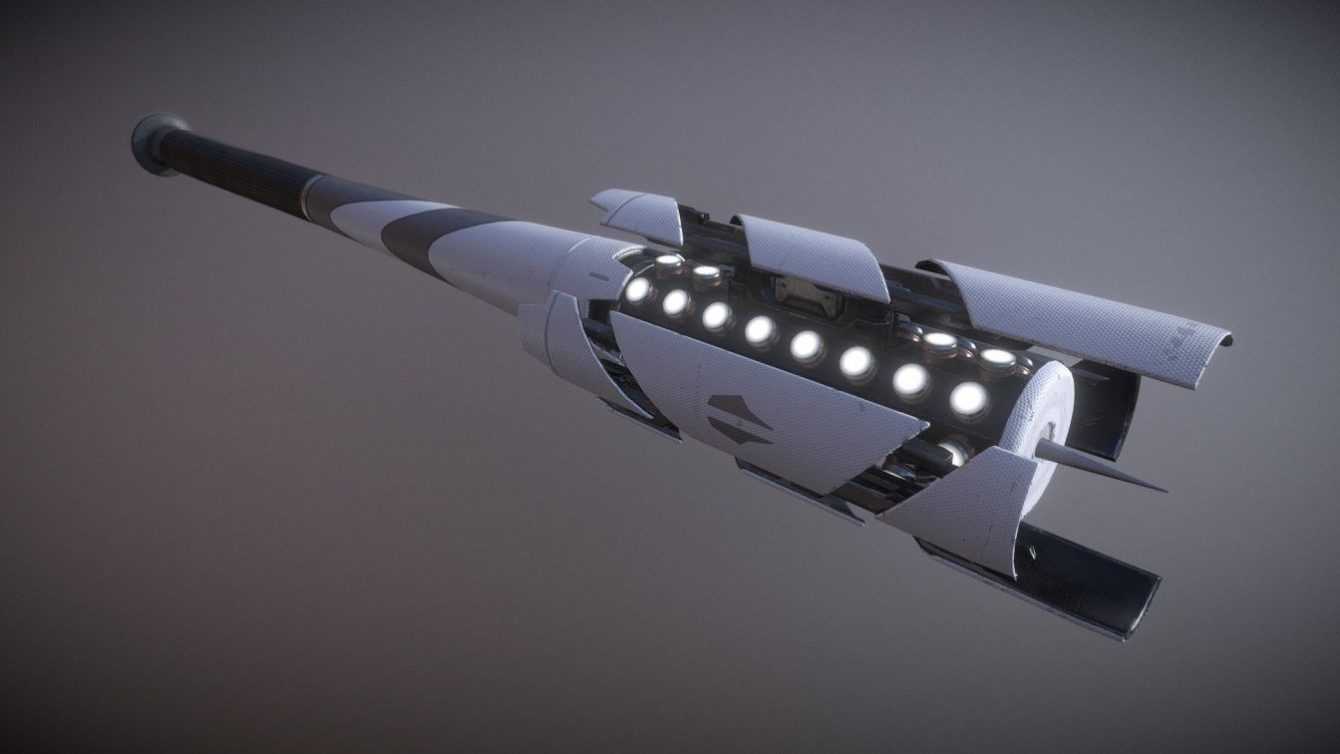 Rank A: the Shotgun, the Sniper Rifle and the Battle Rifle – Splitgate: list of the best weapons

The first weapon we talk about for the tier A we can perhaps consider it a cut above the others, based on how yours is preferred play style. Even with the Shotgun, most hits will result in a one shot one kill, as long as you position yourself at close range than the opponent. And how to position oneself correctly, without being killed in turn? Just know how place your portals correctly inside the map, and that’s it.

Turning instead to the long distance, we see the thousand possibilities of Sniper rifle. The weapon behaves in a completely standard way compared to any other FPS: it too can result in a one shot one kill, but for that to happen we will have to aim for the head. The weapon is therefore more suitable for those who have good aim and a good affinity with sniper weapons. If you can’t kill your opponent with a headshot, instead of wasting time waiting to reload, you could switch weapons and use the gun to finish the job quickly. In any case, the primary recommended approach is to aim for the head.

Many players would prefer an assault rifle or carbine, but the Battle Rifle it is a force not to underestimate. With its causing gusts 15 damage a hit or 25 if you hit the head we can pull the opponent down in most cases with two bursts to hit. Although the cooldown between each burst is quite extensive, the weapon is considered so strong that they have decided to nerfarla previously in various updates, decreasing the damage caused by hits or increasing the cooldown time. In any case, in the current beta build the weapon still appears one of the strongest. 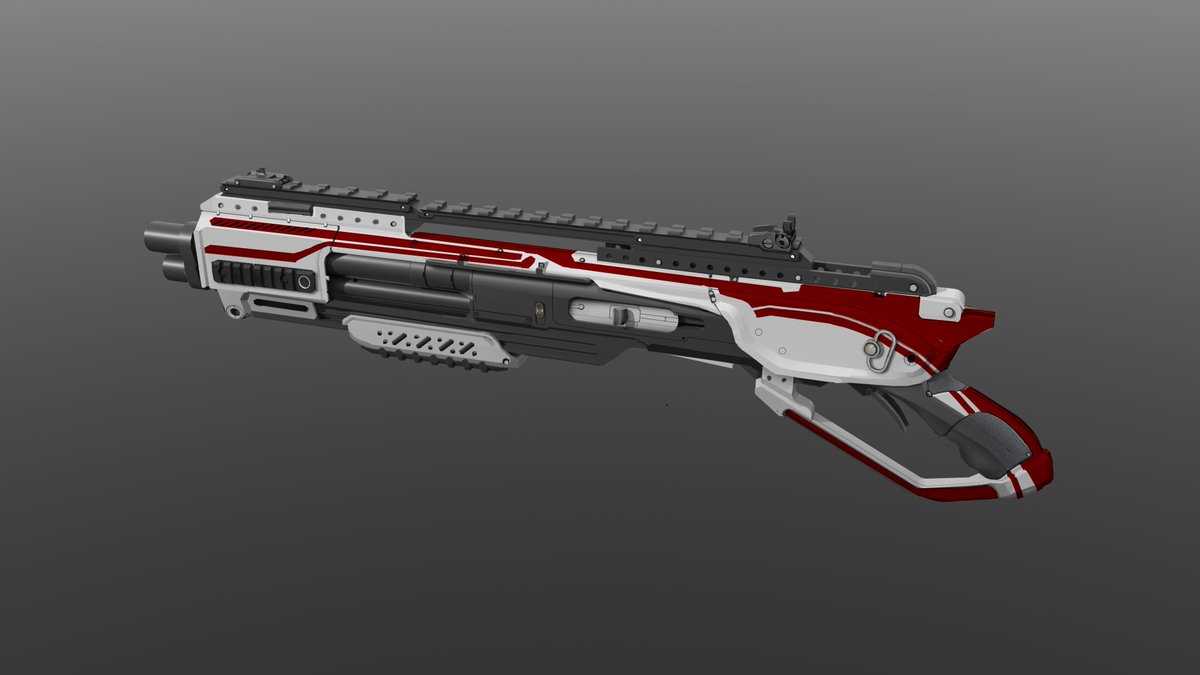 Rank B: Railgun and Carbine – Splitgate: list of the best weapons

We can consider the Railgun an amazing weapon in Splitgate, one of the best weapons perhaps for newcomers, despite not being at the top of the tier list. Here too, again, we have the possibility of killing opponents with a single shot in any part of the body. In addition the radius of the Railgun can perforation bodies, allowing you to hit more enemies if they are positioned in line with us. At first glance, this weapon will look like excessively strong: the whole is balanced, however, by a charging time of 1 full second, which requires high accuracy to avoid missing shots and find yourself in a dangerous situation.

The Carbine is one of the predefined weapons that players get in Splitgate. The carbine, on the other hand, has a moderate amount of damage and a low attack speed. While it doesn’t have the same explosiveness as the battle rifle, it does have bullets that do more damage, that is 40 points for headshots and 30 for the rest of the body. 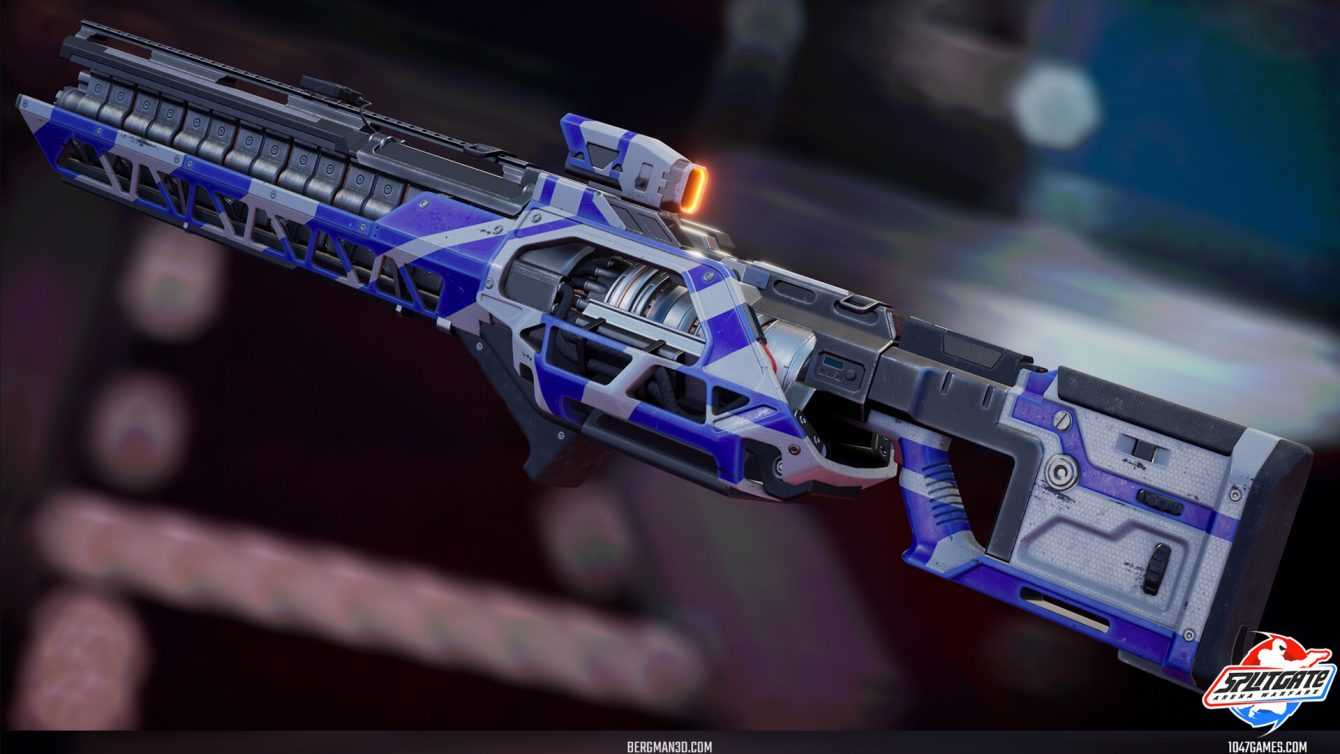 In this section we will talk about the two automatic weapons present in Splitgate, starting from Assault rifle, the other default weapon in the game. If you were to choose one of the two automatic weapons, you should ask yourself first if you are good at aiming for the head, for a purely practical matter. If the answer is yes, then it is the case to turn mainly to the assault rifle, as the higher damage than his hits can make a difference. In general, it should be added that the weapon also has a front sight, making it quite suitable for any situation.

If, on the other hand, you don’t think you have great accuracy, then the Mitra is more for you. It is a weapon designed for combat in close range, having it low precision but the higher rate of fire. It is also possible to use it in medium and long range combat, with less effectiveness but still the possibility of obtaining it anyway good results. Maybe in the future updates she might get some buffs that might make her a lot more interesting as a weapon, who knows. 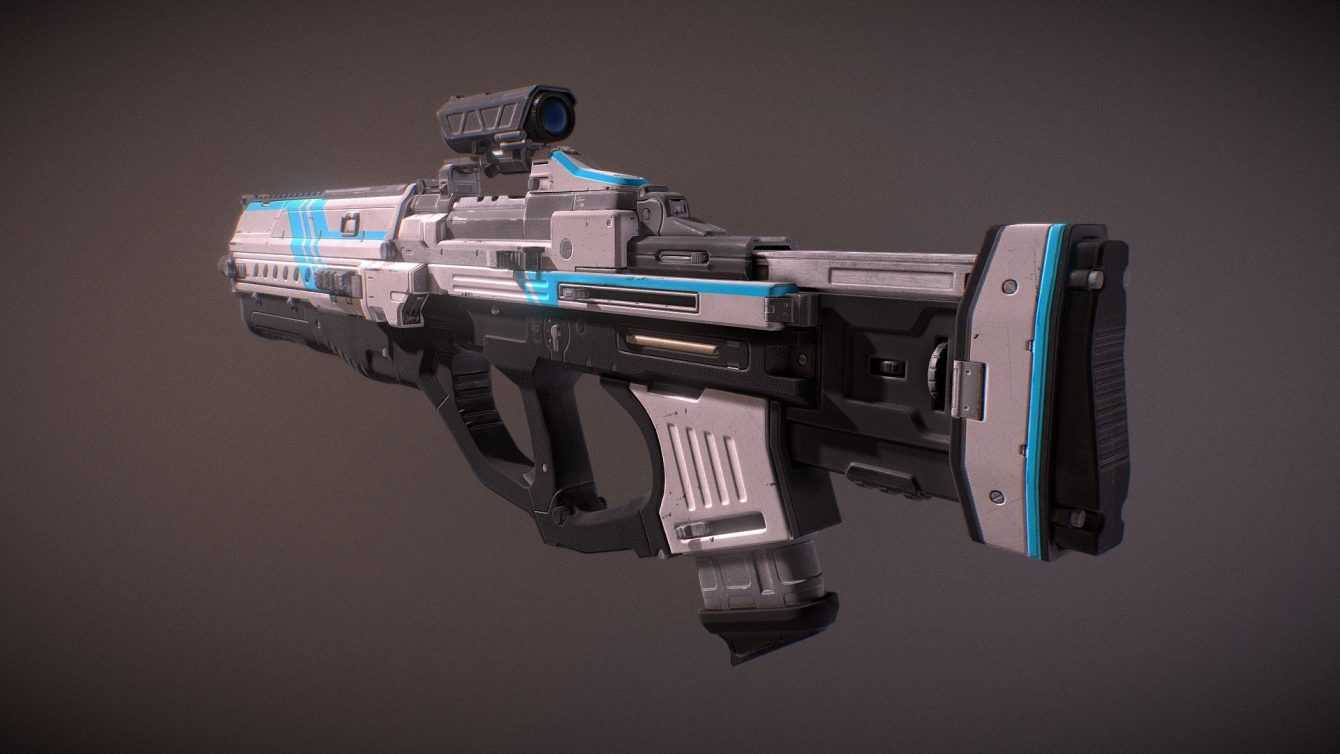 Coming to the bottom of our tier list of the best Splitgate weapons, we can say that, of all the weapons we have seen so far, the only one we have a negative opinion on is probably the Plasma Rifle. The best places to use this weapon are there more closed areas, as you are more easily in close contact with the opponent. Despite the TTK (“Time to kill” for the less experienced, or the time it takes for a weapon to kill an opposing player) is low, the heat bar of this weapon fills up very quickly, preventing the player from firing for a few seconds in case it gets filled up. Therefore, unless you are at close range or above the opponent, this weapon turns out to be way too much inconvenient.

The Pistol instead it is, as one would expect, the weakest weapon in the game far. Although with the beta they added the ability to wonder (zooming in) making it more useful, the low rate of fire and the low single hit damage make it a weapon to be used as little as possible. During your game you will probably find yourself using it only when there will be no other weapons nearby and you will need a quick solution to the threats around you. 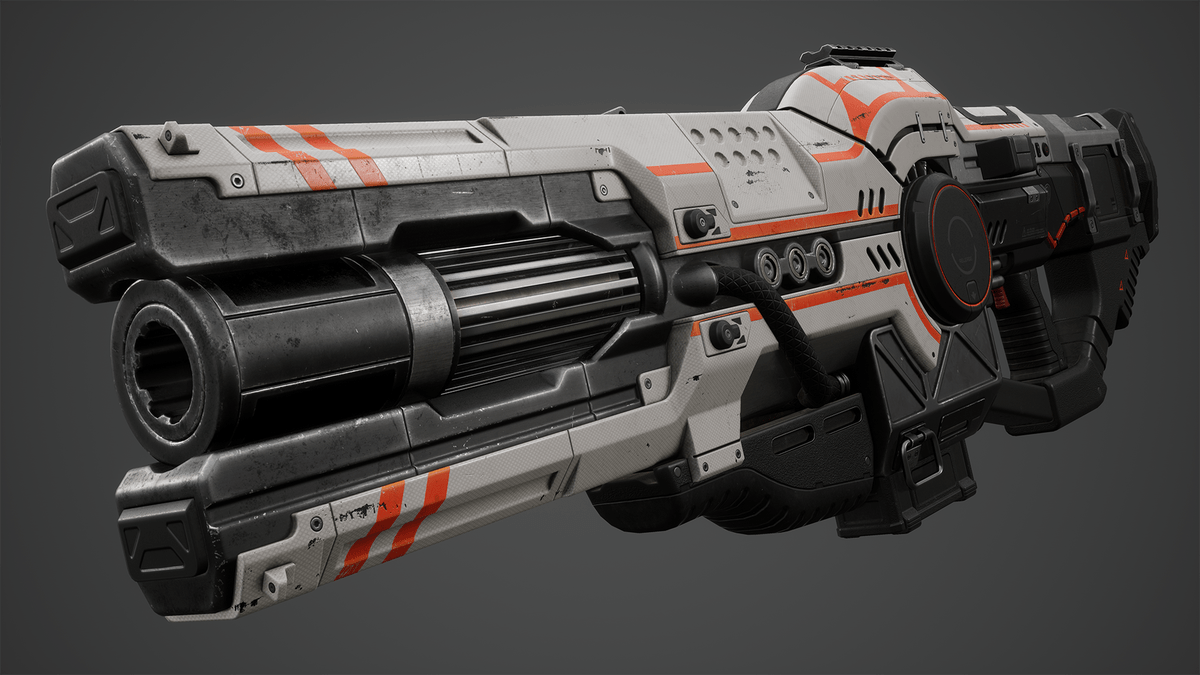 Now come to the conclusion of this article on best weapons of splitgate, we just have to wish you good fun for your match. Splitgate is a FPS that combines the classic formula of Halo with the portals of the series of Portal. By positioning and using the portals to quickly move around the game map, you will see how a very simple mechanic can change the style of play to be adopted, adding a component that significantly increases the fun. We also want to remember that our ranking does not claim to be absolute, but is the result of an analysis that emerged after several games.

To stay up to date on Splitgate (including the news concerning it) and on all the titles of the moment, we just have to invite you to stay tuned to TechGameWorld.com. If you prefer to buy game keys at discounted prices, you can do so through our link to Instant Gaming.