The bomber is back once again! Super Bomberman R Online takes us back to the explosive world of Bomberman, this time in Nintendo Switch format, and we want to tell you about it in our review

Despite the passing of the years, some icons of the videogame world are destined to return and return to the screens periodically. This is exactly the case with Bomberman, the bomber robot who has been doing it for now more than 40 yearsi continues to recur in different forms and ways. The latest, in the wake of a multiplayer direction already taken for some time, also lands on Nintendo Switch. Let’s find out together Super Bomberman R Online, the latest battle royale for Nintendo Switch, in our review!

Bomberman’s story begins in the distant past 1983, when the game first lands on the ancestors of modern PCs. Despite its first single player version, the game changes its face since its second “chapter” in favor of a multiplayer mold in which players (up to a maximum of 10) were busy blowing each other up. After a few years of adjustment and experimentation, it is decided to experiment with multiplayer online with a number of titles: Bomberman Online, Bomberman Ultra, Bomberman Blast and Bomberman Live. Following the acquisition by Konami in 2017, Super Bomberman R is launched for Switch, PlayStation, Xbox e PC. Four years later, consequently to the last chapter, it comes out Super Bomberman R Online which we are going to analyze in our review. 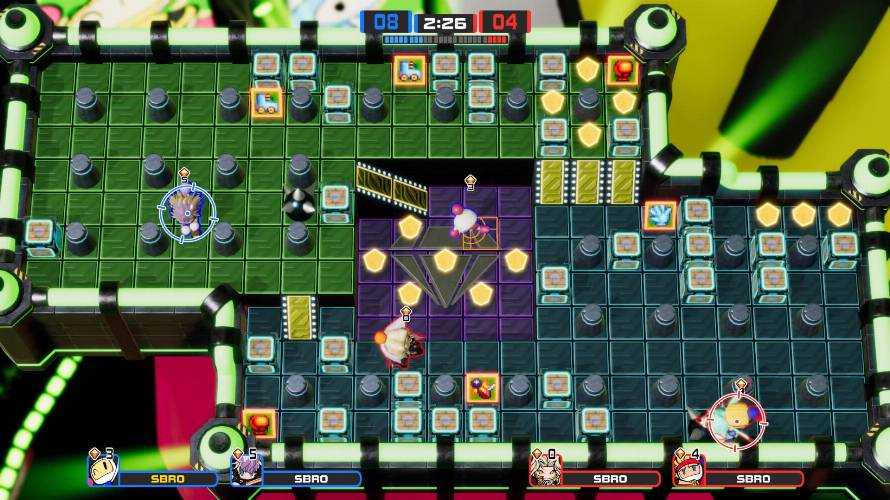 As mentioned above, Super Bomberman R Online is a battle royale with the same technical setting as its predecessor. Although the battle royale genre has accustomed us to other modes, here we find 64 players divided into 16 groups of 4 that will face each other in a single elimination match for a total of 2 minutes in the arena. At the end of the 2 minutes, 4 teams are selected for elimination: if you are still alive, the goal will be to escape to one of those spared arenas within a certain time limit. Once we reach the arena, we will have to fight again and so on, until we get to the last step where the 4 finalists will face off for glory. In the game, there is also a Premium Pack (paid) that adds 14 characters from the most famous brands to the roster, with their own special abilities.

The amount of opponents in a relatively small environment, mixed with the time running out and the falling pillars of rock that risk crushing players, creates a good pace of play, hectic and free of downtime. The only (huge) problem with the gameplay is the gigantic amount of bugs that plagues the game. Between graphic bugs, unmanageable lag peaks and random crashes, unfortunately we are still far from perfect. 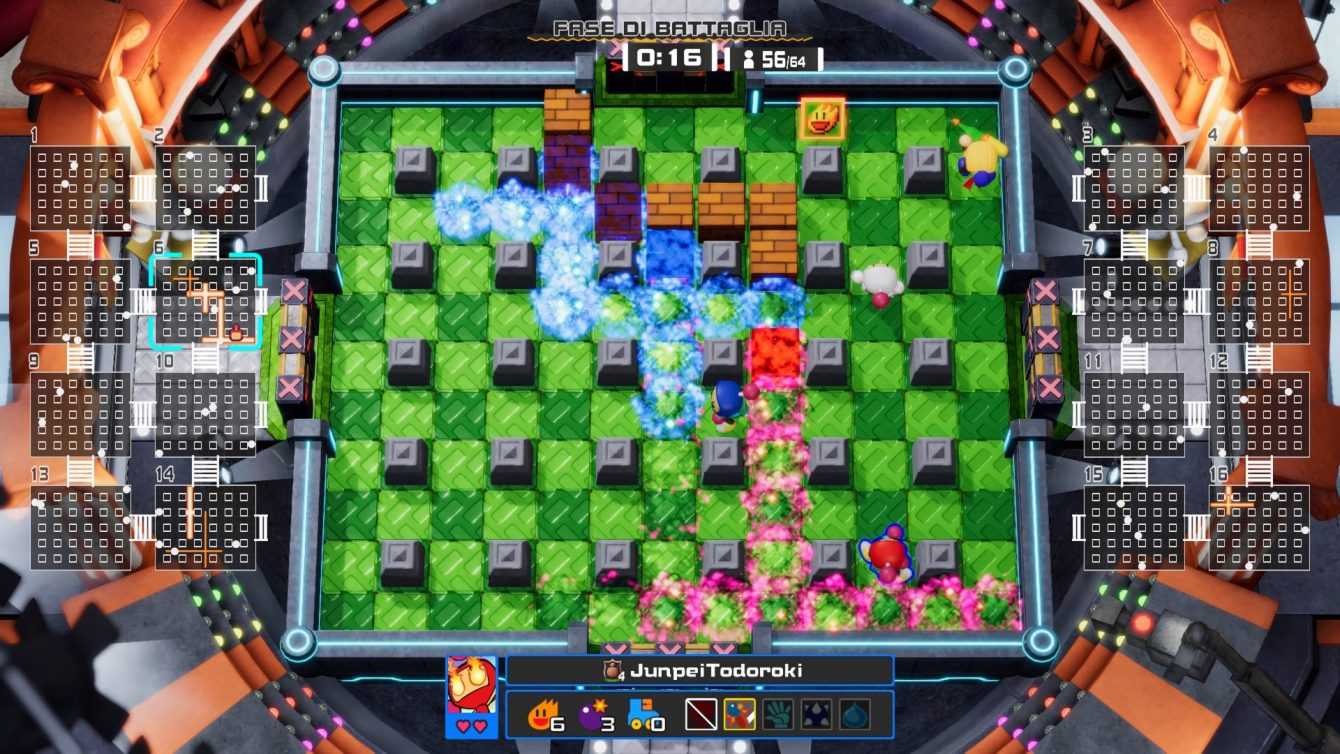 If we don’t feel like taking on 63 strangers on the battlefield, Super Bomberman R Online delivers different modes of game. For example, it is also possible to organize a private fight between friends in which up to 16 players can take part in a single arena. Alternatively, again, a team Grand Prix is ​​available where, at the end of the time, the one with the most points will triumph. Here you can also choose between crystal collection or pure and simple deathmatch, adapting the standard setting of the other games to the Battle Royale formula.

Sounds really cool huh? Too bad to access these game modes you need to purchase an additional 9.99 euro Premium Pack. We do not understand well this “marketing” maneuver by Konami, but to grant paid possibilities that other titles grant for free, having to make them (in a certain sense) as a competitor, doesn’t seem so smart … 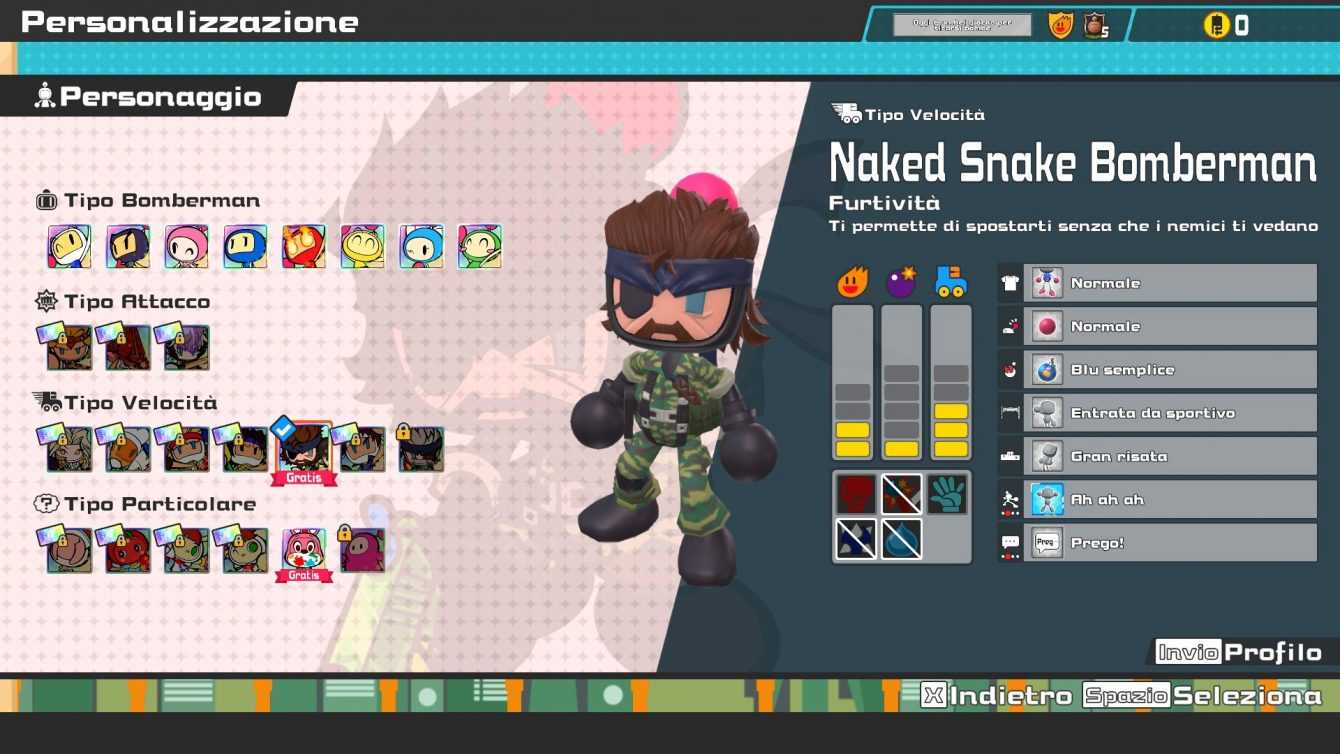 And it doesn’t end there… – Super Bomberman R Online Review: an explosive comeback!

Although the Premium Pack adds a lot of content, including 14 other playable characters, sadly the in-game transaction issue doesn’t end there. In addition to this expansion, a Bomber Pass is available to enjoy the full game experience, very similar to the Battle pass of Fortnite. To unlock this pass, it must be purchased with the game’s virtual currency, which can only be purchased with money. Konami’s twisted, senseless and incorrect policy does not end here: with the Bomber Pass you can only get part of the coins necessary to renew the pass, and therefore cannot be renewed without paying more money.

One thing is certain: if Konami is not willing to revisit this crazy monetization campaign, although the “Bomberman” brand attracts a lot of public both among the youngest and among the aficionados, its PvP variant is destined for a short life and troubled. 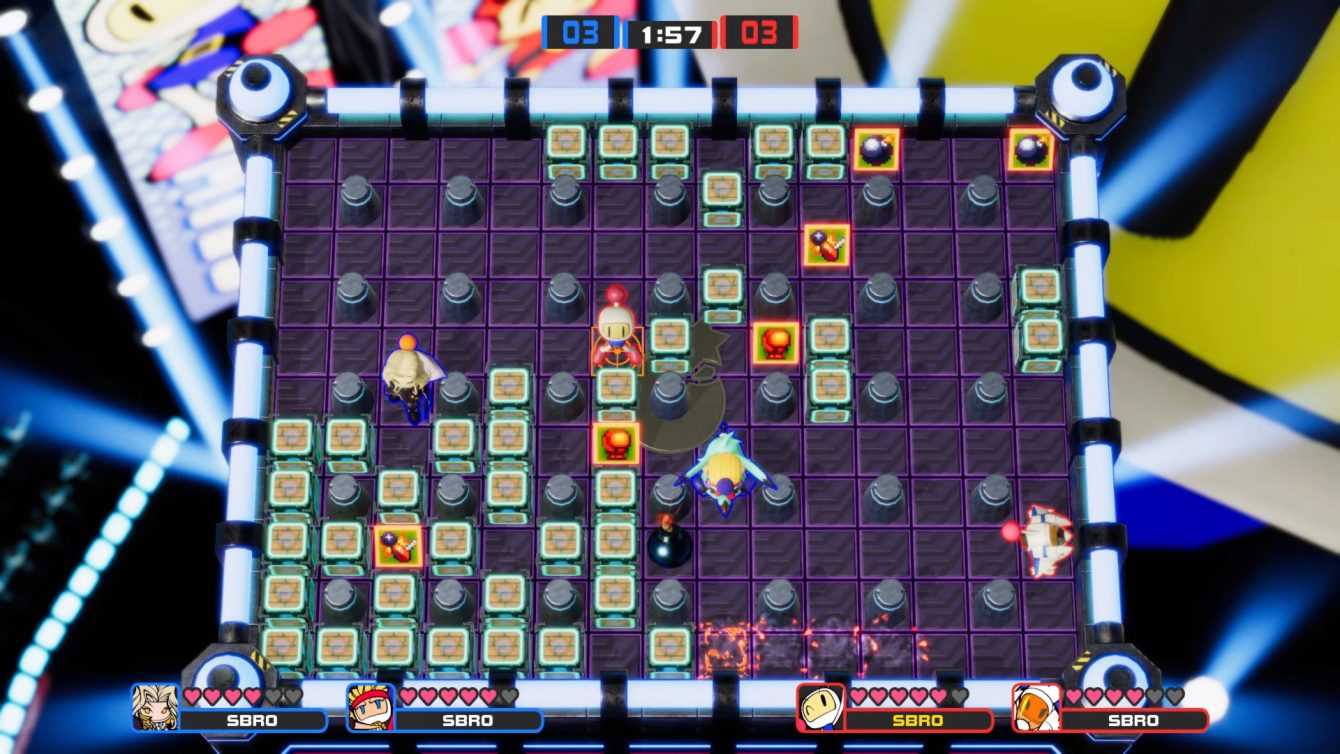 Well friends, at the bottom of this review of Super Bomberman R Online we just have (alas) that sum up. The premises of the game are good, the Battle Royale mode is fun and not boring, but the problems that plague the game are too many and really too important. If the gameplay convinces, the huge amount of bugs that plague the game makes almost any game frustrating. It often happens to start a game (after 5 minutes of unnerving waiting) and see the game crash inexorably in your hands.

Beyond that, Konami’s extreme monetization campaign is probably the worst thing of this game. In a videogame present where all the developers in the world allow users to play with friends, it is really absurd to insert in a multiplayer-based game a paid party mode. In addition, the “Bomber Pass” is not well structured and the actual rewards that can be obtained are not worth the candle. Having to sum up, Super Bomberman R Online could deserve a chance just for its name, and for the fact that we are talking about a free to play game. Due to the policy of the Japanese house, however, probably the title will remain only a substitute for a demo of what could be a much better complete game than what has been seen so far.

Super Bomberman R Online is available free for download. For more news, updates and much more from the world of video games, we invite you to stay connected on TechGameWorld.com. Also, don’t forget to check out the Instant Gaming catalog for always discounted games. Hello!

A fruit that is still too unripe.