In this review we will discover and analyze Super Mario 3D World + Bowser’s Fury, the re-release of the title for Wii U with the addition of what is a new standalone chapter for all.

Intense and pleasant emotion that is felt when an end, more or less consciously pursued, is reached or a desire is satisfied

It is precisely with the definition of “Joy” that we want to start this ours Super Mario 3D World + Bowser’s Fury review. With the re-release of this title for Switch, Nintendo wanted to bring back to light and in the eyes of gamers the excellent work done with the game itself, born for the unfortunate Wii U. Console that created a sort of preferential route for the success of his younger sister.

Between past and future

Once the game has been started, the main menu will offer us the possibility to start one or the other adventure, without the need to have completed one of the two first. This choice suggests the idea behind the creation of this edition.

Nintendo offer the possibility of recovering a title from the recent (and unfortunate) past, adding to it a real new chapter that could trace a new path full of interesting ideas. Let’s clarify, therefore, that the two titles will be addressed yes within this one same review but dedicating to each of the dedicated paragraphs (we ask forgiveness for repetition), and then rejoin everything in the technical evaluation and in the final evaluation which will therefore be comprehensive of all that is the package proposed by the Grande N.

L’starts narrative Super Mario 3D World is very very simple. Mario, Luigi, Peach and Toad, during a very pleasant moonlit walk in the Kingdom of Mushrooms they will see a particular transparent tube protruding from the ground. Princifata will ask our friends to repair what is in effect a passage to the Kingdom of the Fairies. Once repaired, a series of iconic objects of the saga will come out of the tube itself, starting from the classic coins to the upgrades passing through the famous stars.

All this, however, will attract the attention of Bowser who, with impetus and arrogance, will kidnap all the Princifates, forcing the protagonists to launch into the tube thus reaching the Kingdom of the Fairies, consisting of a series of Worlds, within which the entire adventure will take place. Adventure that can be faced with all the individual characters mentioned above, all available from the beginning and with their own characteristics (it will be possible to unlock another character, Beautiful rose, durante l’endgame). 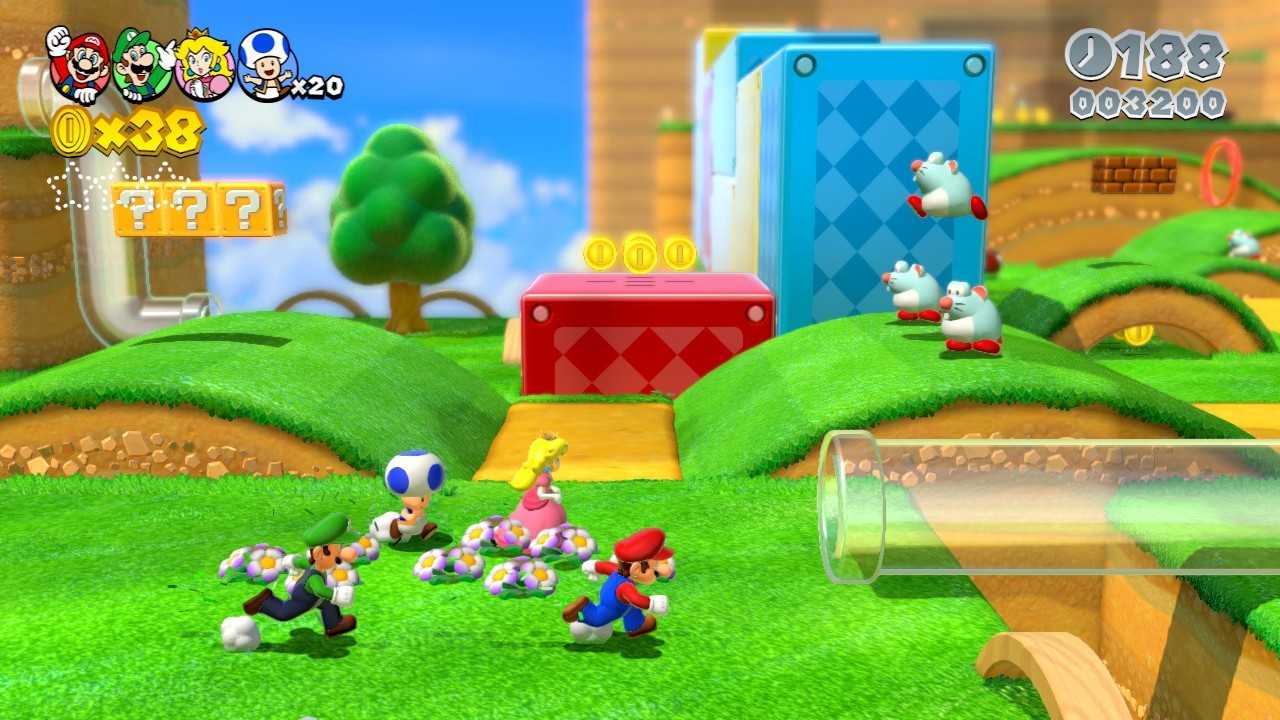 The quantity and variety of playable characters create an interesting, however “short” branching. Branching which, however, also offers a possibility of reunification. On the one hand, a branch, will lead us to the choice of addressing the individual worlds in lonely with one of the four characters. With Mario our experience will be very balanced, a right mix of stability and speed. With Luigi we will have the opportunity to jump longer. With Peachinstead, we will be equipped with greater acceleration and we will have the opportunity to glide and float longer while, the dear little Toad, it will be a concentrate of speed and agility … but be careful not to slip too much!

The second branch, instead, it goes to embrace the idea of ​​facing the various worlds in a cooperative, putting in place two, three or all four of the available characters. This offers the possibility of combining characters based on their skills and characteristics, as well as offering the opportunity to have fun in company. A perfect choice and that perfectly combines with the basic concept of the Nintendo Switch itself. 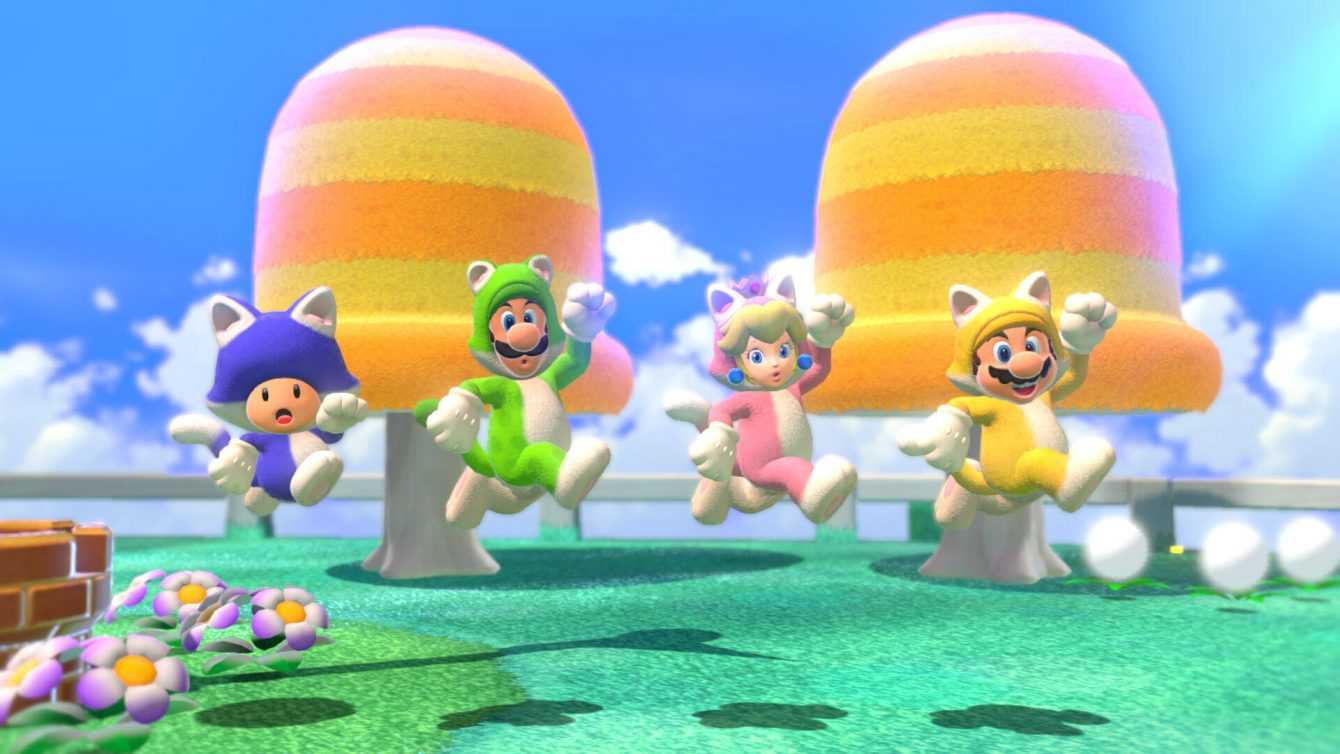 Our review of Super Mario 3D World + Bowser’s Fury opened with the definition of the word “Joy” and, you’ll have to forgive us, if you probably haven’t figured out why yet. We will try, in this paragraph where we are going to dissect the gameplay of 3D World, to make you understand what was the motivation behind our choice. It might suffice to say that playing Super Mario 3D World is one of the most enjoyable videogame experiences of recent years. It might suffice to say that we are in front of it to the apotheosis of platforming and brilliance in level design which produces an “ironically dangerous” cherry effect, pushing you to the compulsive tendency to completeness and to wanting to explore every corner of every single world.

A series of game design and level design choices that take on depth based on the conjugation with the various enhancements and transformations feasible. We will have the opportunity to transform Mario in Cat, this will enable us to climb portions of the various walls that we will encounter and carry out a timid but lethal attack offering a minimal action component. Offered in turn also by the transformations in Mario Fuoco, Mario Boomerang and Mario Tanuki. A separate mention, however, deserve the transformations in Mario Tanuki White, Giga Mario and double / triple / quadruple Mario.

The before (White Tanuki) will make us practically invincible and is offered to the player, in the form of a cube to break, when the deaths within the world in which we find ourselves will greatly increase. With Giga Mario even in this case we will be invincible and we will have the opportunity to destroy anything that comes our way. With Double Mario (up to quadruple) instead a real one will take place split and we will find ourselves playing with two, three, or four Mario’s at the same time. 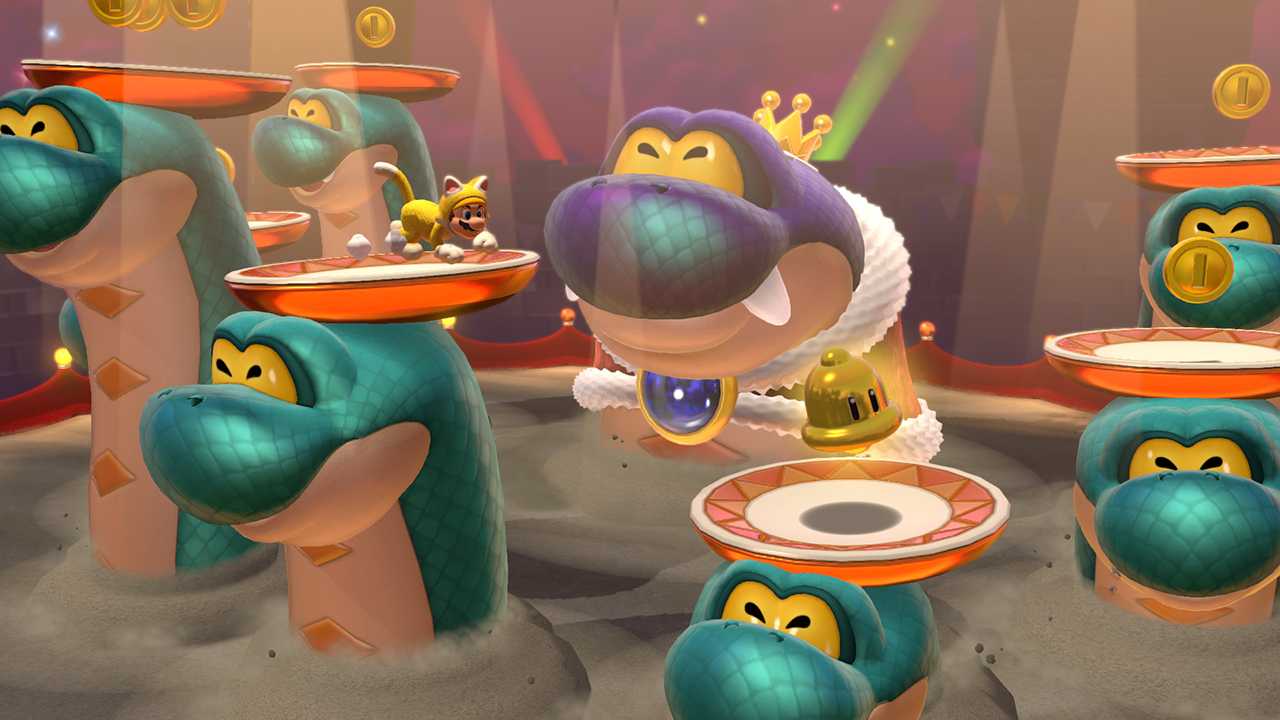 A positive mention should be made of the choice to sip the availability of the best upgrades while, it must be said, although it may only be for some a real point of “demerit”, that the level of difficulty, especially in the first worlds, appears to quite low and that even the basic transformations will make us slightly OP. Clearly each transformation will be the same for each character.

Even the choice of the levels to be faced presents some interesting ideas. We will have the entire map of the Worlds available with the individual levels within which to go. All interspersed with the classics Toad houses, in which we will be able to obtain upgrades. Slot Machine in which to find always welcome coins e levels dedicated to Captain Toad (precious to accumulate stars).

Our goal will obviously be to find the greatest number of stars for every single level and for every single world, face the boss at the end of the world (in very classic and basic boss fights) and slowly free all the Princifates trapped. 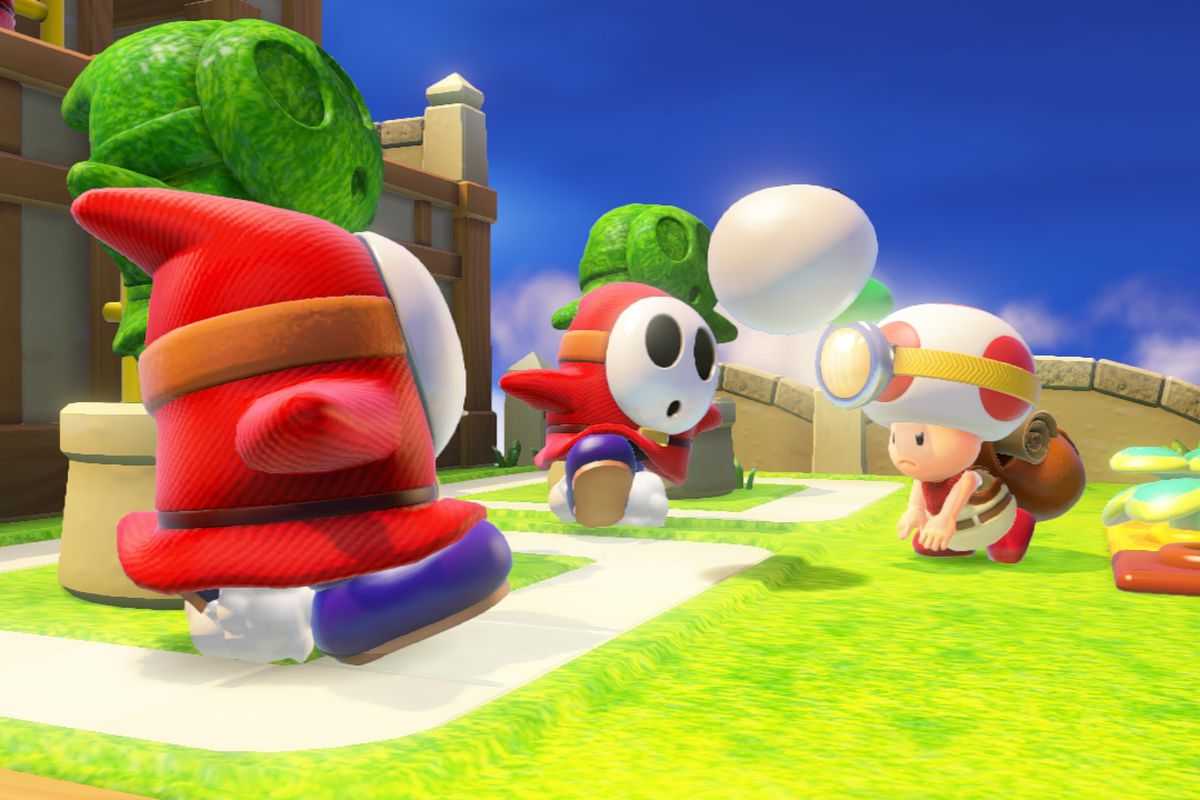 Arrived at this point of ours Super Mario 3D World + Bowser’s Fury review the time has come to dedicate ourselves to the unedited addition of this particular edition. Bowser’s Fury also has a very simple opening. The small Bowser Junior he will ask our trusted plumber to help him recover his father’s sense Ariostically, Bowser. Do not worry, no trip to the moon on the back of a Hippogriff but many opportunities for fun and variety, also in this case. Bowser’s Fury presents a fairly simple structure to interpret.

We will have a whole map available, within which to carry out our activities. It will touch us unlock corrupt headlights From one black substance which has further corrupted even the “poor” Bowser. To do this we will have to recover some Solegatti which, in turn, we will have the ability to unlock in different ways. 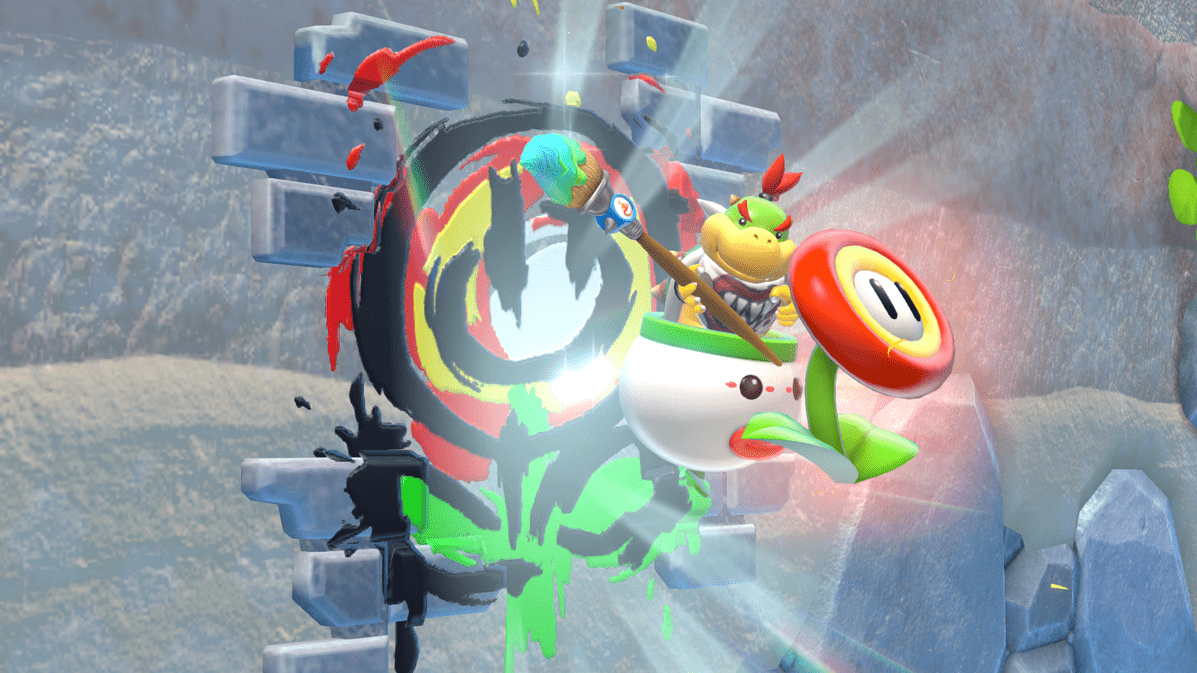 By carrying out, for example, a very scrupulous research on the single island in which we will find ourselves, collecting several fragments of Solegatto, or by carrying out a series of tests, or by exploiting the same anger of Bowser who with his beam of fire from his mouth will break some walls within which some Solegatti will be hidden.

The anger of our enemy / friend will be unleashed at a rate of about ten minutes and to ensure that it ends we will have to collect just a sun cat. This will make the search for the same very hectic in the phases of Fury, thus also offering a bit of extra suspense. Also in this case it is possible to play in cooperative mode, entrusting to one of our playmates the management of Bowser Junior. The same, if you want to play solo, will help you anyway and you will decide the degree of help which he will have to implement, thus having a significant impact on challenge rate of the title. 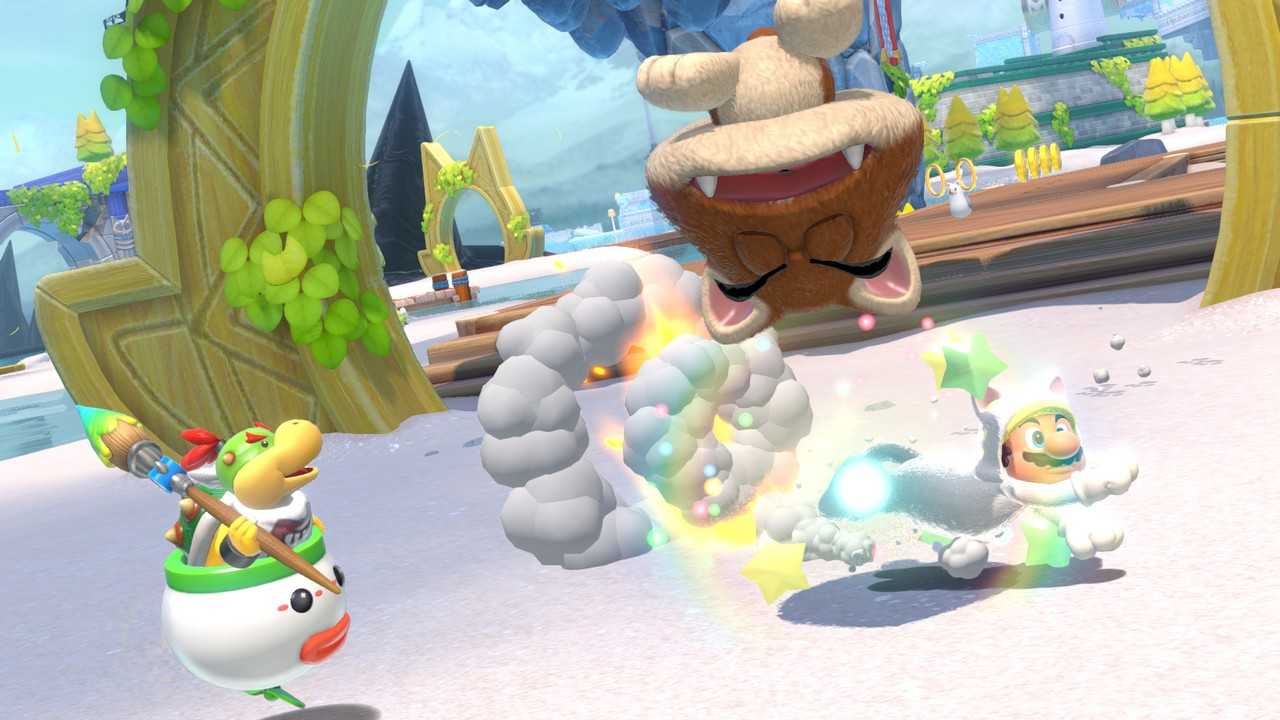 As previously mentioned our exploration of the game map will be interspersed from the sequences in which, dear Bowser, he will unleash all his wrath. Depending on the number of Solegatti collected, within the same map, the possibility of resorting to the so-called Gigacampana. Thanks to it, recalling the transformation into Mario Gatto obtainable through the collection of the classic bell, we will be able to transform ourselves into Giga Mario Gatto. When we go to make this transformation it will be possible to fight with the same Bowser and undertake some real ones boss fight. These boss fights have some small issues that could make them a little flat.

We refer to management not particularly inspired by the room which, lacking the ability to lock the enemy, will make some phases a bit confusing. At the same time the fight could come down to waiting for Bowser ports a fulfillment his own pattern of moves and then make ours: a simple leap on his uncovered body.

Fortunately, however, we are also given the possibility to block a move of our enemy through an attack in Giga Mario Gatto mode (which we can lose by taking damage, and recover by going to the Gigacampana again during the fight), and throwing to the enemies of the objects scattered on the map that will take on the appearance of a real one arena. In our opinion, there are some foundations of this type of boss fight solid insights which we hope will come thorough in future chapters. 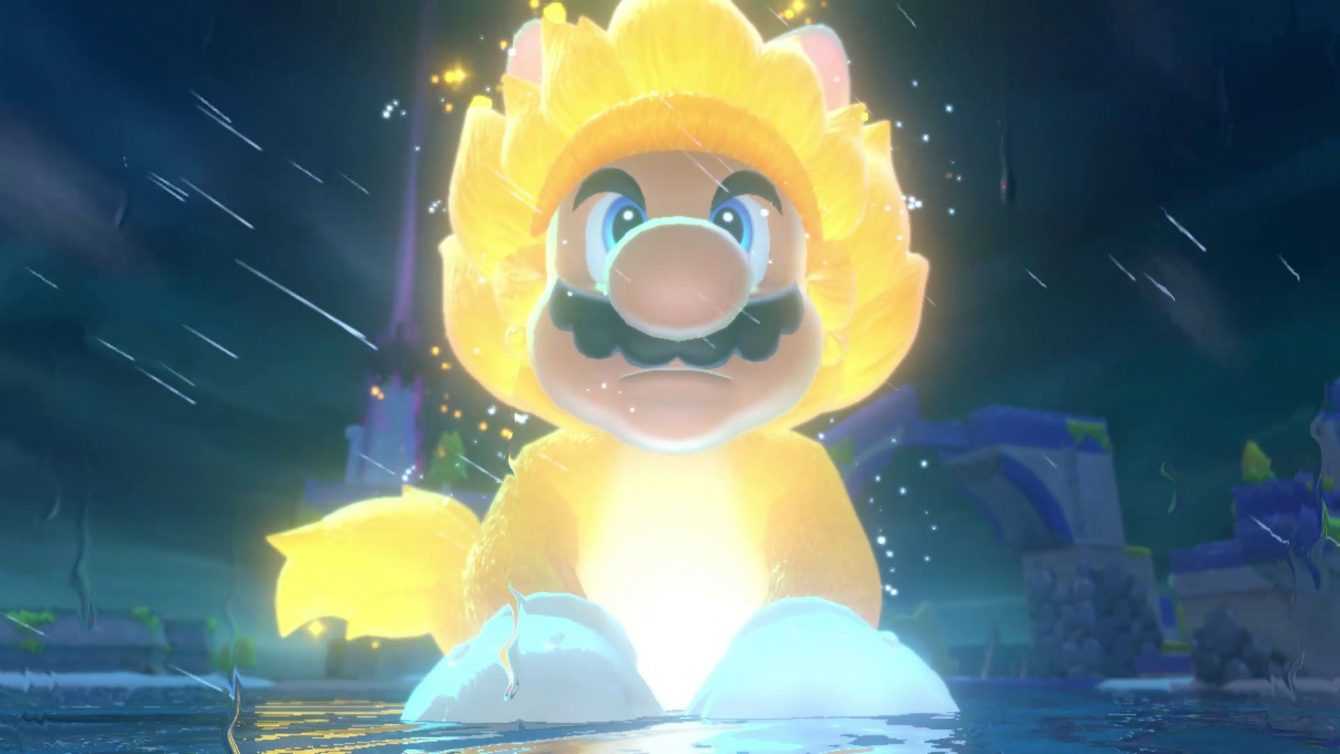 A feast for the eyes – Super Mario 3D World + review …