The next event of the Super Smash Bros. Ultimate weekend will be full of joy: the protagonists are the most smiling Spirits

One week after the expected tournament dedicated to the new arrivals on the roster, theevent of this weekend will be a new skimming for the titanic collection of Spirits featured in Super Smash Bros. Ultimate. The title of the event already gives us a clear idea of ​​what we can expect: in Spirits board in fact, priority will be given to those who stand out for their “Dazzling smile“. Since the Spirits sample (over 1400 at the writing of this article) an encyclopedic “collection of stickers”, as it was called, it will be the latter that boast a well-tended set of teeth and not their over eighty interpreters.

A weekend event to smile at in Super Smash Bros. Ultimate

The protagonists of this weekend’s event in Super Smash Bros. Ultimate will be the following. You will get to find it more often Wario-Man, Giga Mac, Waluigi, 9-Volt and 18-Volt, Mr. Sandman, Rayman, Categnaccio, Grin, Daruk, Gengar, Dribble & Spitz, Bald Bull, Donbe & Hikari, T-Rex, Heracles, Crab, Sir Baraonda and Joe Cilindro, Swanky Kong, Piombospino, Talpy, Forte & Piano and, finally, Tempo. Be careful, because even among those of the Ace class there are real troublemakers. We recommend that you pay particular attention to 9-Volt and 18-Volt. 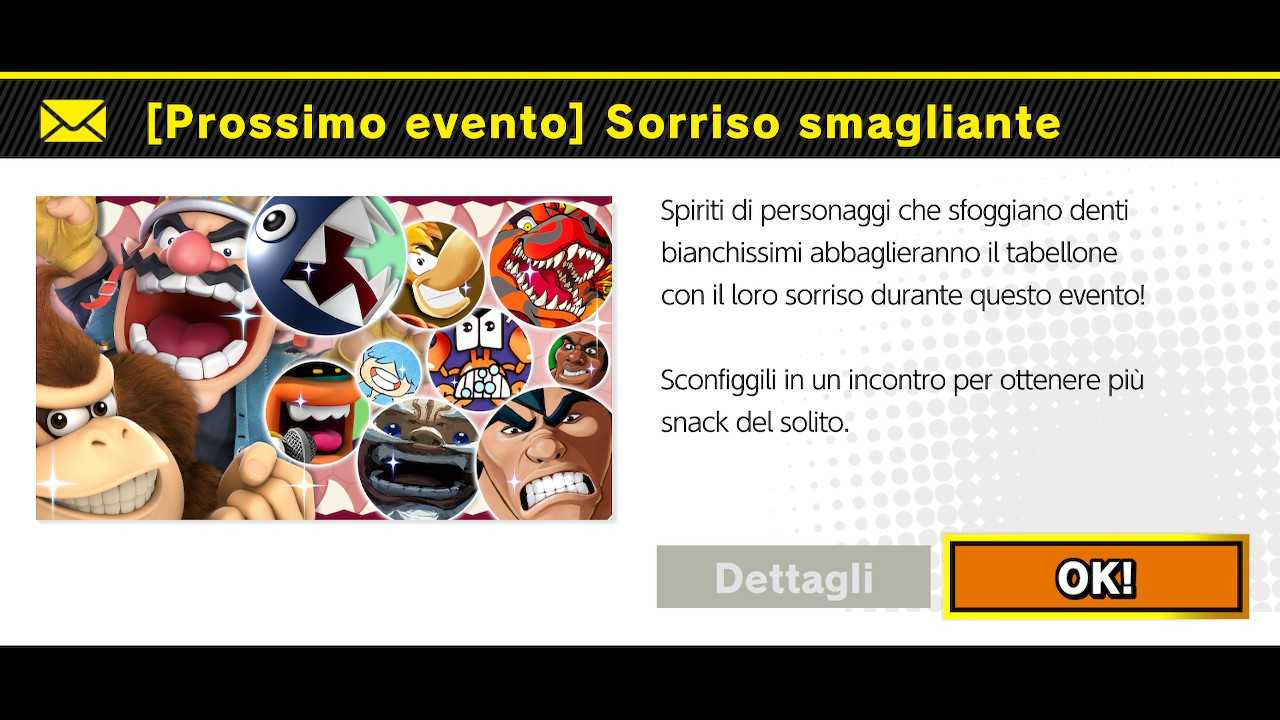 Irony (cruel, for those who wanted them as playable characters) wants that this weekend it will be possible to recover “at least the images” of two great excluded from the roster: Waluigi and Rayman. The latter will appear at set times (eleven in the morning / evening), together with the Legends Wario-Man (seven in the morning / evening) e Giga Mac (three in the morning / afternoon). The event is scheduled for the day after tomorrow, Friday 5th November, and will start at seven in the morning. The dances will close at the same time on Monday 8. What can I say: even with a full roster, Masahiro Sakurai’s magnum opus intends to keep us company for a long time. And that’s good, given the doubts about the future of the series.