Surprisingly, the announcement of the event takes place the same day: the Spirits of Monster Hunter Rise arrive in Super Smash Bros. Ultimate

In order to avoid associations with April Fools, after Parapiglia at Dream Land the event dedicated to Spirits unpublished from Monster Hunter Rise in Super Smash Bros. Ultimate it was announced on the day of the start, that is to say today. In other words, therefore, at the time of writing this article we have already had the opportunity to make all three new contents our own. The protagonists will be, in driving order, Companion Felyne, Magnamalo and Companion Canyne. We did not mention our explanation dedicated to the entire roster at random: having faced the three new faces in question, in fact, we will take advantage of it for explain how to do the same.

Before starting, the news

We briefly close the purely informative aspect of this improvised special by remembering that the Spirits of Monster Hunter Rise, as unreleased content, will remain on the Super Smash Bros. Ultimate Board for five days instead of the usual three. The event started this morning – Friday 2 April 2021 – at eight, and it will end Wednesday 7 at the same time. At this point, we can move on to our in-depth analysis on the matter; we could have just shown you our screenshots taken for the occasion, but as you know by now, we don’t like to do things by halves.

First on the list is the Comrade Felyne (Spirit of Support, Beginner), by virtue of being represented here by three Pikachu. The scenario where we will face them is The Remote Planet, in the version The Ruins (composed, for those who do not remember, of a main platform and three smaller ones). One particular instrument will appear in the scenario: the Trap, which the opponents will try to grab before you. In addition, the enemies will start the fight with a Bob-Omba at their disposal. Powerful side attacks (↔ + A on the ground) will be the main strategy of your opponents, making them the least difficult you will have to deal with. 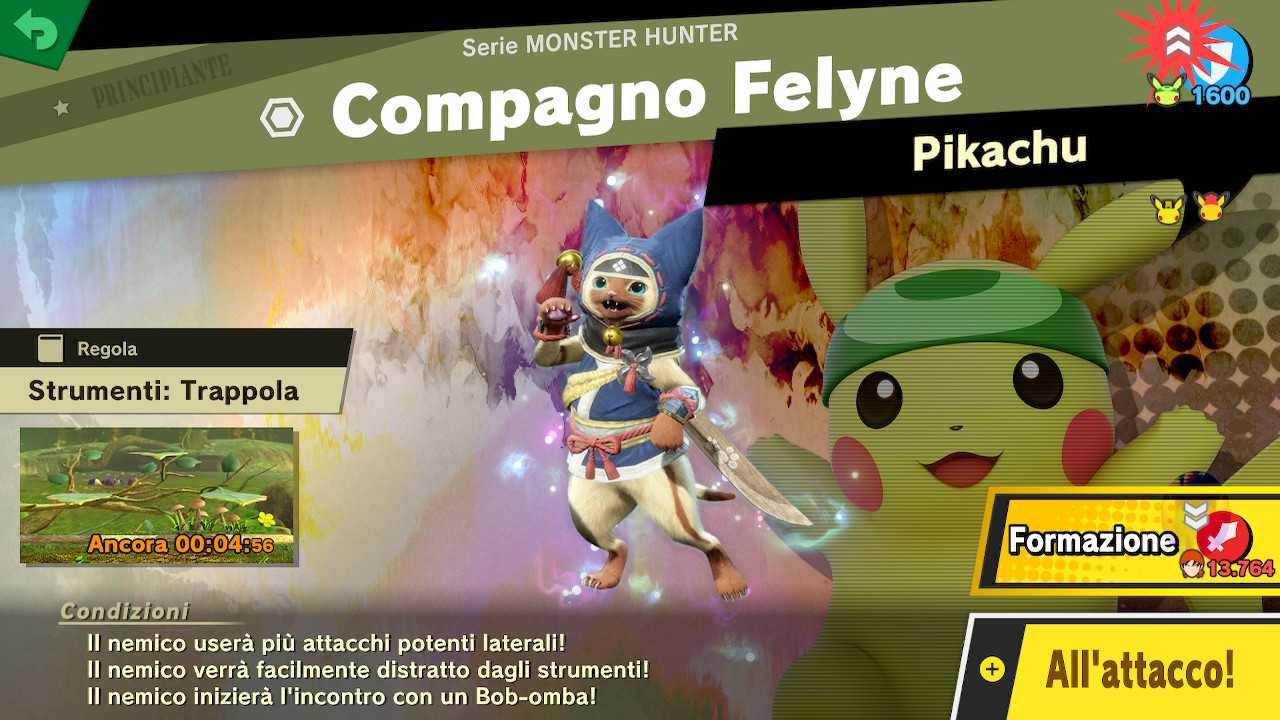 Moving on, it is Magnamalo – fixed presence in the promotional material of Monster Hunter Rise – the second stage in driving order, because in Super Smash Bros. Ultimate it is Bowser (Fighting Spirit, Ace) to “interpret” this character. If you think the bad news stops at your opponent (who in this case is at least alone), there is more. You will face it at the last stage of The Besieged Castle, or the swinging platform above the lava. The enemy is already a heavy character, but in this one battle based on life points Sara giant at the start of the fight and more will be done fast, aggressive (attack) and leathery (defence) at the end. The most difficult battle of the three is this. 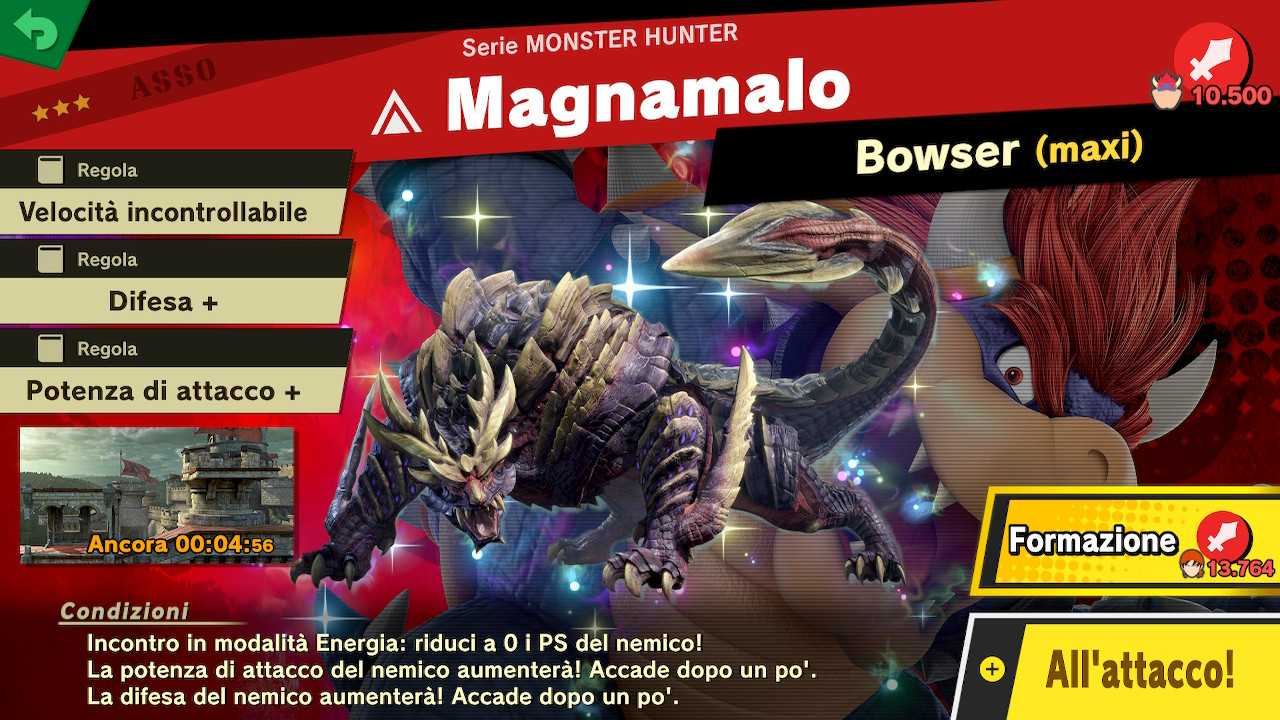 We conclude with the Comrade Canyne (Fighting Spirit, Rising Star), played by the Duo Duck Hunt with a Mii Swordsman to keep him company. The Swordsman wears the DLC costumes if you have purchased them; we have them, so we don’t know how the game behaves for those who don’t own the costumes dedicated to the brand. Either way, you will face them at the Plain of Gaur, and they will start the fight with a Lethal blade. Despite the size of the arena, opponents will have higher speed as the fight progresses. In addition, the AI ​​in this case is programmed to make a lot of attacks on the run. 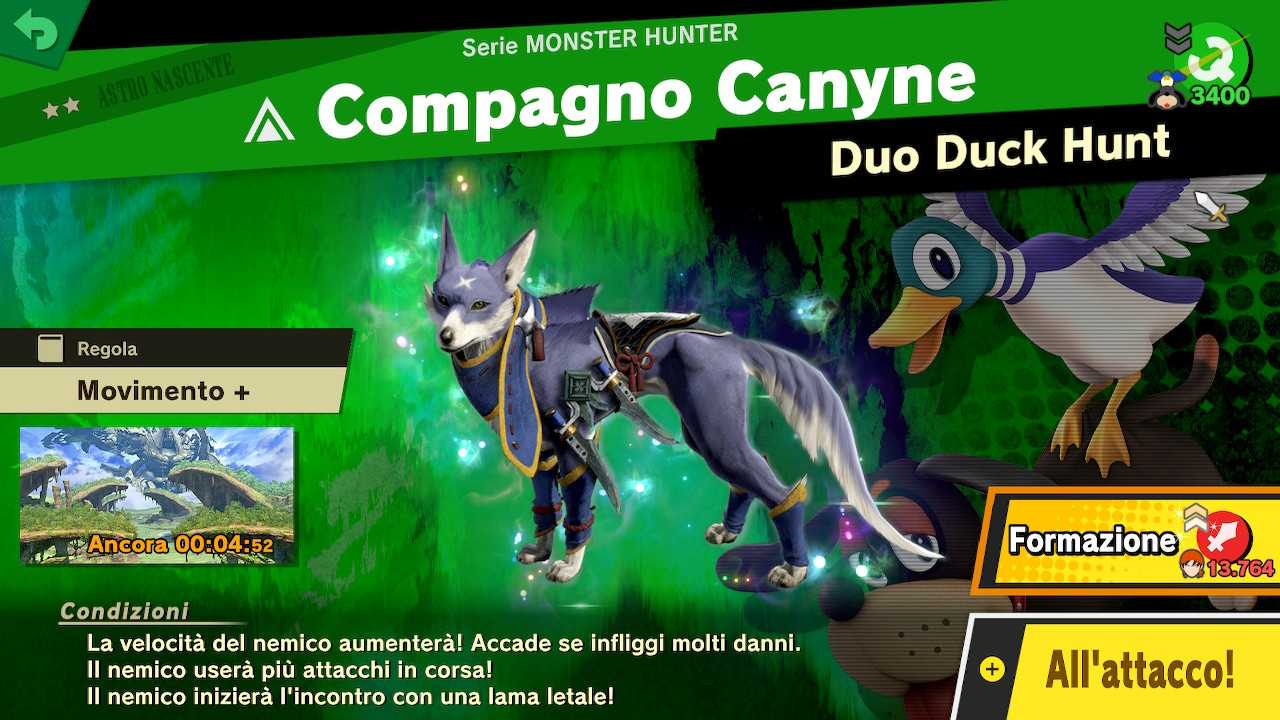 Now it’s up to you to tell us yours: what do you think of the event? Let us know below, and as always do not forget to stay on TechGameWorld.com for all the most important news on the videogame sphere. For your gaming needs, you can instead find the best discounts in digital format on Instant Gaming.