Like every Wednesday we are gathered here to welcome the new weekend online event, in this case a tournament, from Super Smash Bros. Ultimate. After the special “all bones” last weekend, now go back to the characters themselves, guide in hand, give them a good reason … as long as they can touch. The “Flipper folle” tournament is in fact here to put us in front of a specific tool, the Bumper. We take this opportunity to give you one miniguida how this throwing weapon works, as knowing how it works will be essential to avoiding a resounding defeat.

Guide to the Bumper, the protagonist of the Super Smash Bros. Ultimate online tournament

In the next online tournament, the Bumper will be the center of attention – how does this Super Smash Bros. Ultimate tool work? It is a throwable weapon, and as such it can be collected (A in place, close to the instrument) e launched (A / A + ↕ / A + ↔ / Smash plug / attack). If thrown towards the ground, the Bumper will remain stationary there, facing upwards; otherwise, it will hover in the air with the series logo facing the screen. Either way, it won’t deal damage but will jump away every character who touches him, inflicting a potential 60% KO. This weapon is great for prevent recoveries (especially against disadvantaged opponents) and disappears only after ten interminable seconds. 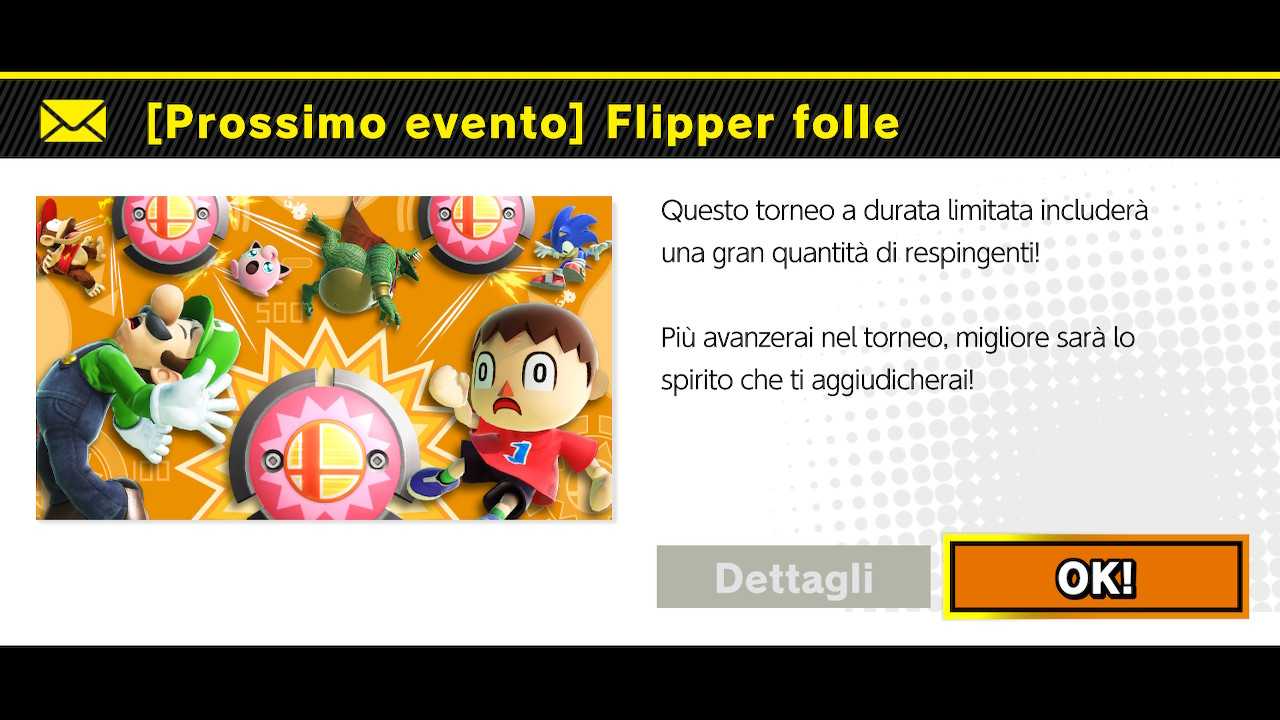 Returning to the details valid only for this occasion, the “Flipper Folle” tournament will last for the usual three days. The dances will open Friday 30 July at eight in the morning, and they will close at the same time on Monday 2 August. Two more will also be available instruments: la Sphere Smash ei containers (Cases and Capsules). The rules always include timed clashes of two and a half minutes in duration and with the Final Smash Bar active, but this time with tools in abundance (instead of the usual “enough”) Many were also chosen scenarios (most suitable for Repellents), but non they will all be available. This is a very generous skimming, so we will communicate the arenas in a separate paragraph.

We let you consult the list of scenarios available in the tournament, in the same order as the extended version of the in-game notification you see above offers.

Now it’s up to you to tell us yours: what do you think of the tournament? Let us know below, and as always don’t forget to stay on TechGameWorld.com for all the most important news for gamers and more. For your purely gaming needs, you can instead find the best discounts in digital format on Instant Gaming.