Last week we talked about the total ranking of the 10 best-selling cars in Europe in the first half of 2021, and we are left with the promise to investigate the issue in the world of electric and hybrid. Today then we see which are the 10 best-selling electric cars in the first half of 2021, again thanks to the data of the specialists of Jato Dynamics. Are you ready? Let’s plug in!

The 10 best-selling electric cars in Europe in the first 6 months of 2021: the queen is the Tesla Model 3

Let’s start off strong with the first classified, which can only be of the most famous and discussed brand on social media and among the layman: Tesla. The California House is now at first place with its cheapest but, at the same time, more modern and efficient product, the Model 3. While waiting for the Crososver Model Y, despite the not-so-trendy three-volume bodywork, Fremont’s compact sedan scored well 66,010 registrations, more than double the second classified.

But it didn’t just do exceptionally well compared to electric rivals. In June, Model 3 took second place overall in Europe by sales according to Jato Dynamics, second only to Volkswagen Golf. An excellent result that rewards both the qualities of Model 3 and the incredible and currently unbeatable infrastructure set up by Tesla. From a product point of view, Model 3 is a car that divides, either you love it or you hate it. Streamlined and capable of combining traditional shapes with futuristic details on the outside, the smallest of the Tesla sports a interior to say the least minimalist, perhaps too much. Everything is about the huge 15-inch central screen, which are entrusted with all the main functions of the car, from the vision of speed to entertainment up to active safety systems. 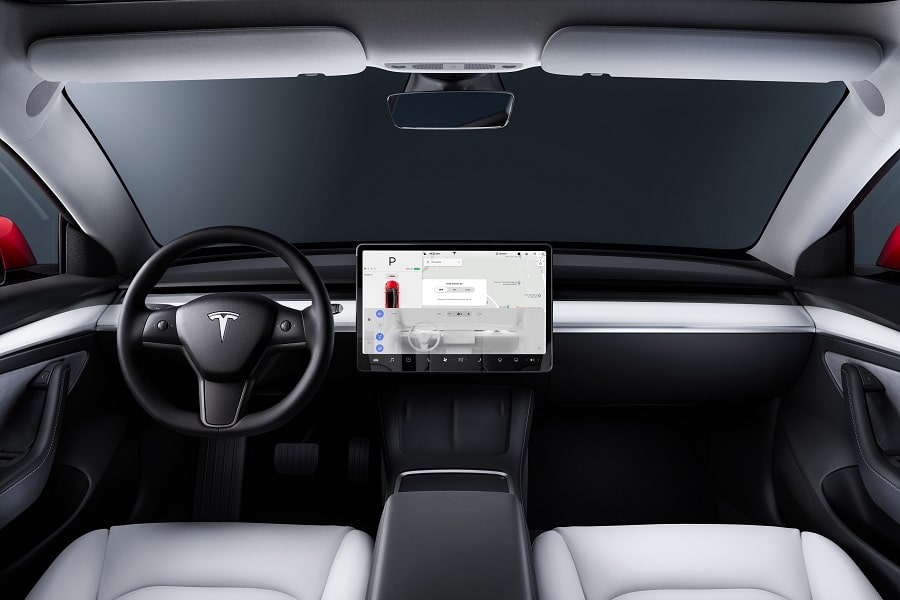 At the wheel, Model 3 surprises for a level of sports performance from the basic Standard Range + version, which becomes almost a Supercar with extreme Performance. Spacious and versatile just the right, Tesla’s real added value, however, is the presence of the incredible proprietary network of charging points, the famous Superchargers. Spread across Europe, these very fast charging stations are exclusive to Elon Musk’s cars, and thanks to their speed and spread they at least limit range anxiety more than any other rival. And autonomy is also not bad at all. The Long Range versions reach 614 km of autonomy in the WLTP mixed cycle, supplied by a 78 kWh battery. Prices? It starts at € 48,990 for the Standard Range + with a range of 450 km, which fall below 40 thousand with the incentives.

Although more than 30,000 units away, al second place among the best-selling electric cars in the first half of 2021 in Europe there is a true sacred monster of our continent, Renault Zoe. The little French girl has in fact totaled 30,382 units, becoming the second force in the European market second only to the creation of Elon Musk. Renault Zoe has chosen one different path than the technological and performing Model 3. No crazy performance, no incredible levels of active technology and entertainment. 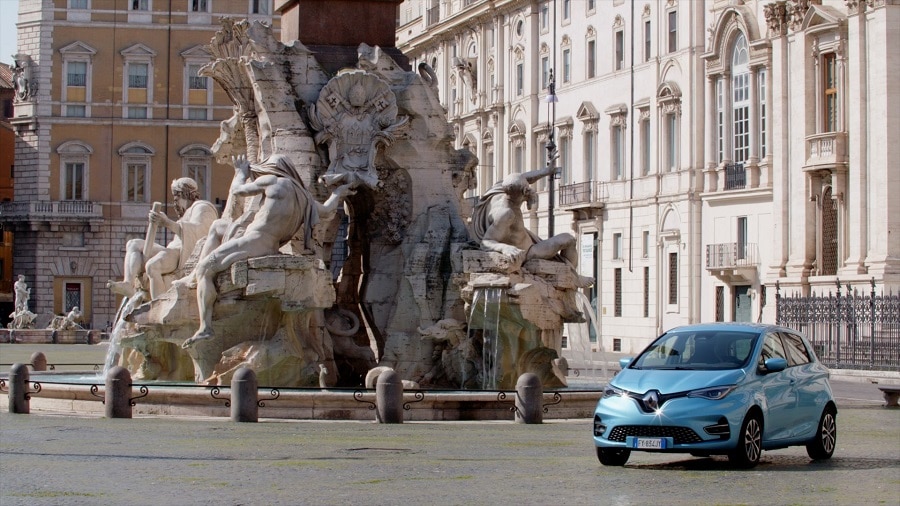 Rather, Zoe is an extremely pragmatic and functional car, which, however, does not renounce an elegant, pleasant and distinctive style and the interiors taken from the thermal cousin Clio (with whom, however, it does not share anything from a mechanical point of view), well made, elegant and functional. Good space on board for people and luggage, while the infotainment is the same appreciated on the Clio, complete and well made. From the point of view of performance, however, Zoe is pretty quiet. Equipped with two engines from 109 or 136 CV with single front engine, Zoe is snappy and lively in the city, and the more powerful version also defends itself out of town with one 0-100 km / h covered in about 9 seconds. 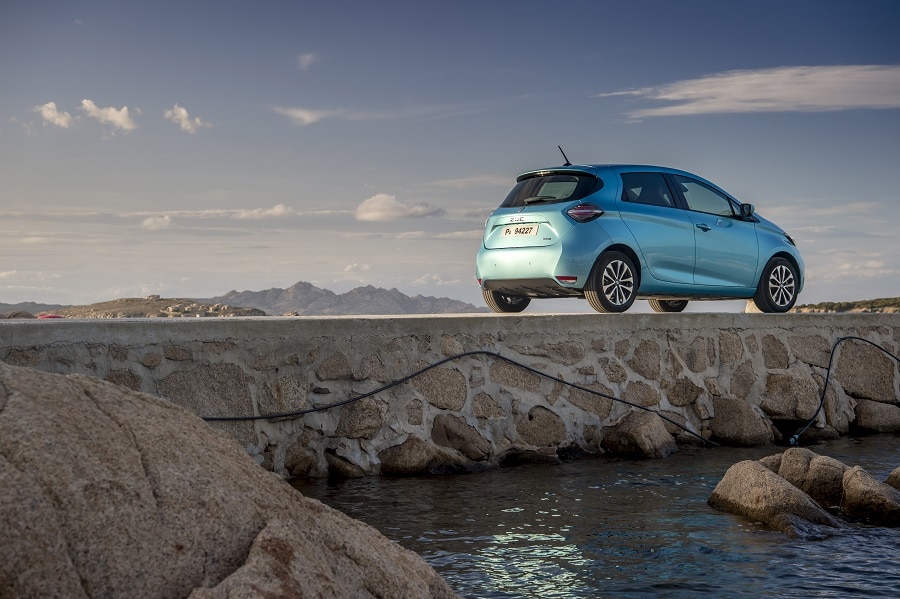 Zoe, however, convinces for her excellent autonomy, obtained with a battery of about 52 kWh. In the WLTP mixed cycle, in fact, both in the 109 and 136 HP versions, the Zoe scores over 390 km of autonomy. The price then it really is competitive. Freed from the battery rental formula in force until a few years ago, Zoe starts in the basic version from 35,700 euros, that with Renault’s incentives and discounts can easily drop below 25,000. A reference quality-price ratio.

The third step of the podium is German: VW ID.3 is liked all over Europe

Let’s move from France to Germany to get to know the third force among the best-selling electric cars of 2021, Volkswagen ID.3. The “third revolution” of Volkswagen after the Beetle and Golf first divided several opinions between detractors who did not appreciate its aesthetics and admirers, but now it seems to have convinced everyone a bit. With its short bonnet and long, spacious cabin, the ID.3 is very original, but the more time passes, the more it convinces on an aesthetic level.. In its first year of life, the smallest of the IDs. totaled 30,329 units sold, not even 60 less than the already established Zoe. The merit is above all of MEB platform, the new base developed specifically for electric cars that found its debut on the ID.3. 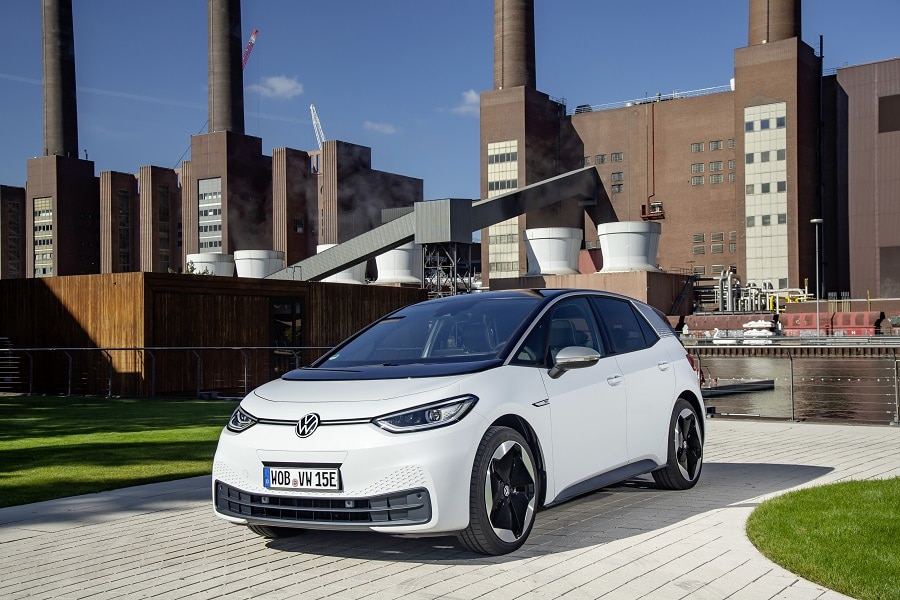 The secret of its validity is to be found in the presence of the engine and traction on the rear axle. This choice gave Volkswagen the opportunity to get a lot of internal space for luggage but especially people, with the ID.3 offering the same interior space as the much larger Passat in Golf-like dimensions. More, rear-wheel drive allows the ID.3 to have an excellent turning circle of just 10.2 meters, lower than several city cars. This makes it very agile both in the city and outside the city, where it sports aexcellent driveability. Available with 150 or 204 HP and three battery cuts (45, 58 and 77 kWh), ID.3 shows Volkswagen’s current thinking about electric cars. Acceleration (the fastest ones complete 0-100 km / h in 8.5 seconds) is lively but not burning, with a linear and continuous delivery, from the internal combustion engine. 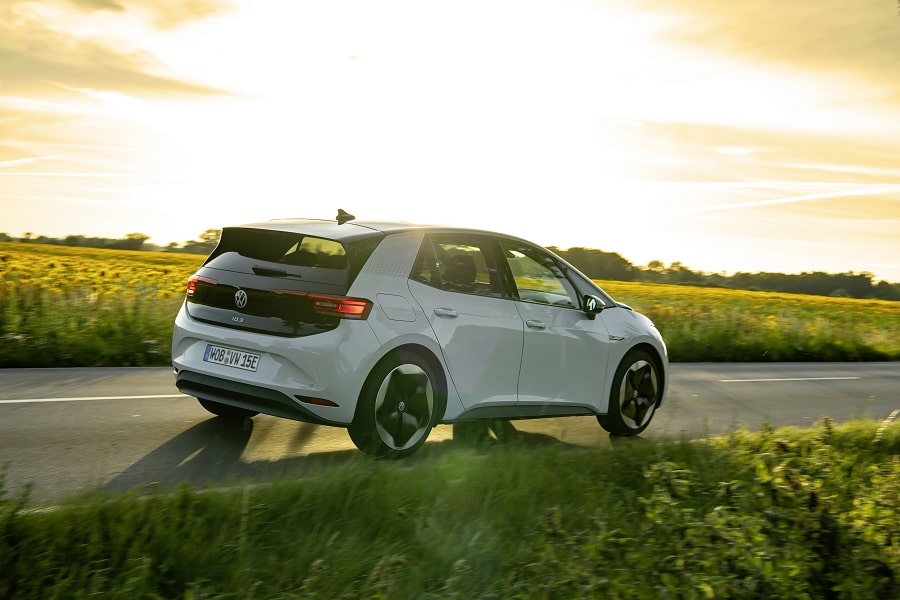 Even the regeneration under braking does not come to allow driving with a single pedal like many rivals, e and the interiors are minimalist but similar to those of Golf, from which it takes the imperfect infotainment system and the sometimes cheap materials. Volkswagen’s goal is to offer an electric car that feels like driving a thermal. The reason? Facilitate the transition to all customers who come from Golf, Passat and other thermal models, making them feel immediately at home. The range then reaches 549 km on the 77 kWh Tour version, with the “normal” 204 HP and 58 kWh easily exceeding 400 km. The price? It starts from 34,800 euros, while the more balanced version with 204 hp and 58 kWh starts at just over 40,000 euros, which drop to around 30,000 with incentives.

In fourth place among the best-selling electric cars is always Volkswagen with the ID.4

Al fourth post among the best-selling electric cars in Europe we find another Volkswagen, the SUV sister of the ID.3: VW ID.4. The House’s first electric SUV shares the MEB platform, with rear engine and a lot of agility in the city, and the great availability of space inside. How much did it sell? A little less than the smaller and cheaper ID.3. The German SUV stopped at 23,873 units, making it the first SUV in this special ranking. ID.4 is about 30 cm longer than ID.3, and offers in the dimensions of Tiguan an interior space from Touareg. Even the trunk of over 540 liters it is really excellent, able to offer space for all 5 (comfortable) occupants. 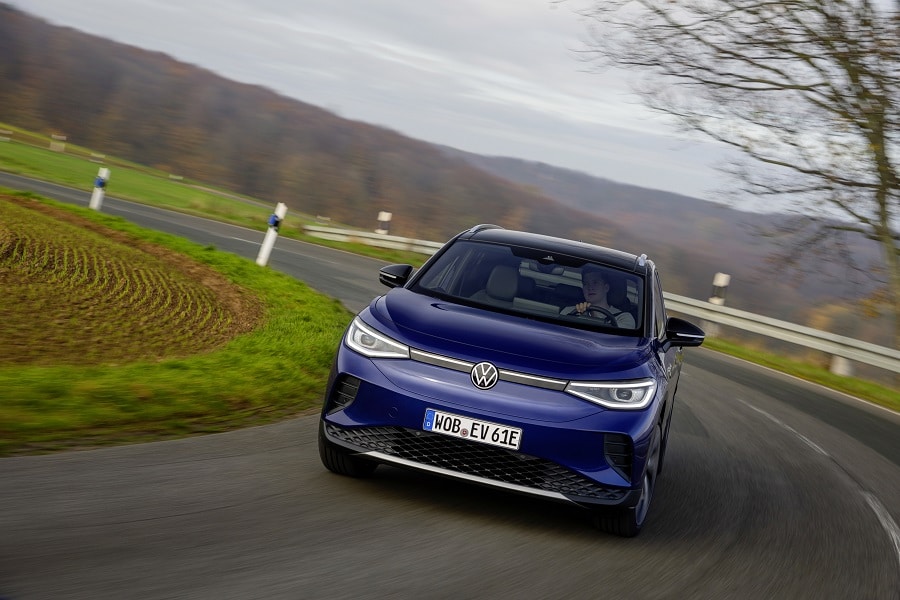 From ID.3 it also picks up the dashboard, minimalist and modern but perhaps a little spartan and made with materials that are sometimes not up to the price. ID.4, however, convinces with a very traditional drive, easy and distant from other electric ones. As on the ID.3, Volkswagen’s goal is to offer a car with a classic driving experience to allow an easier transition for customers arriving from a thermal VW. ID.4, unlike its compact sister, is not available with the 45 kWh battery, offering only the two largest batteries of 58 and 77 kWh. 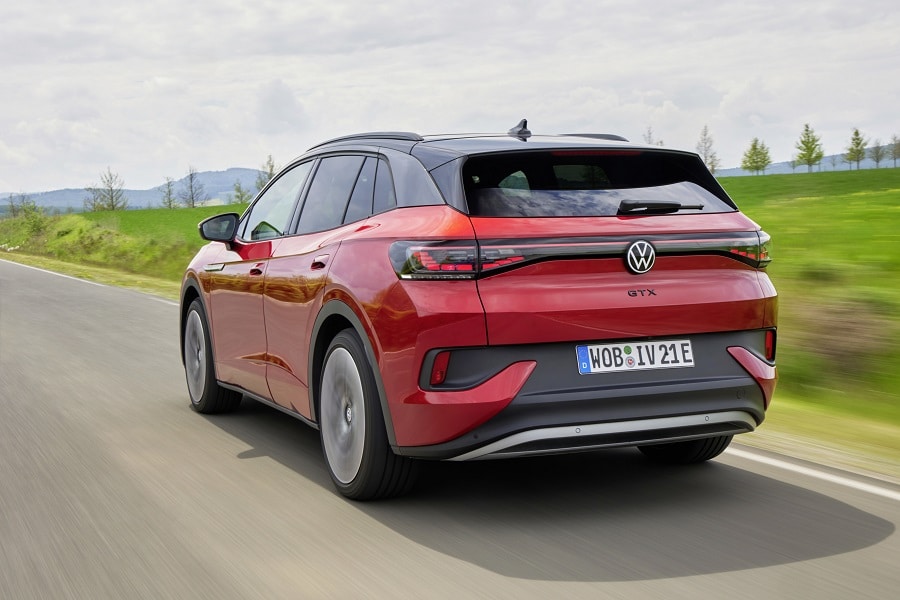 There are also three possibilities in terms of engines. Two power levels rely on the rear engine only, with rear-wheel drive, from 170 and 204 hp. The third version in the list is the most powerful electric Volkswagen available, the ID.4 GTX. Equipped with two engines, one front and one rear, offers well 299 hp and 0-100 km / h acceleration covered in less than 6 seconds. L’autonomy? For the single-engine versions, it reaches up to 520 km in the WLTP cycle, which drops to 480 for the GTX. The price? Despite the shared base, ID.4 costs around 10,000 euros more than ID.3 with the same set-up, starting from 43,800 euros for the basic Life version. The sporty GTX? It starts at over 54,000 euros.

The TOP 5 of the best-selling electric cars of 2021 closes with another SUV, Hyundai Kona Electric. The compact SUV of the Seoul company passed into our hands a few weeks ago, and find our road test by clicking on this link. But leaving aside our impressions for a moment, the objective data of Jato Dynamics deliver the fifth place overall, with 21,733 units sold, about 1,000 more than the sixth in the standings, the little sister KIA e-Niro. 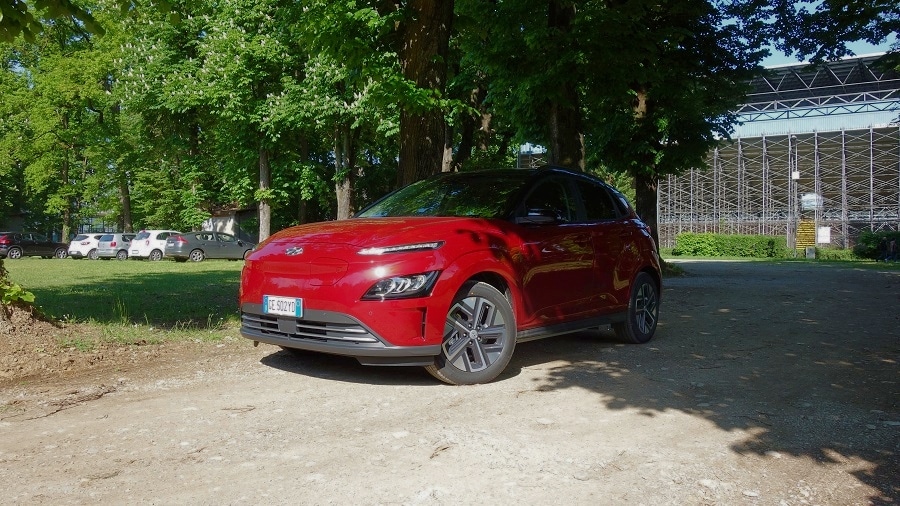 Kona Electric is one of the electric we liked the most in this 2021. This year has indeed arrived a important restyling, which has renewed the line of all versions, including the electric one. Original, personal and very recognizable, Kona maintains the proportions and tail that we all know. The front, however, is very different from the previous one and from the thermal versions. If all Kona have in fact a very large and impressive front grille, the electric now renounces a grille of any type, showing off a fully faired front in body color. 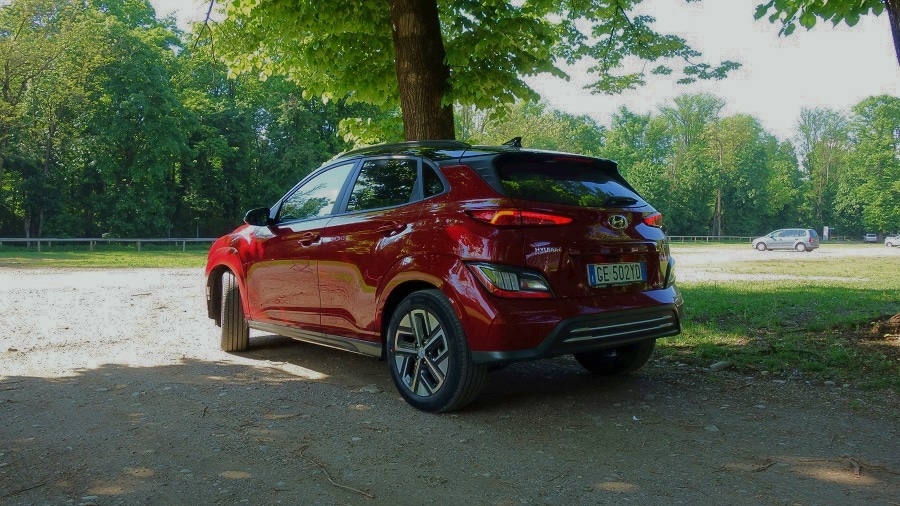 The only one in the Top 5 not to be developed on a totally electric platform, Kona stood out right from the launch for excellent driveability, excellent availability of space (with the trunk penalized by the presence of batteries on the electric version) and record autonomy. Available with two cuts of batteries, from 39 and 64 kWh, in the larger and more powerful version (equipped with 204 HP) Hyundai …