The Coalition’s Unreal Engine 5 tech demo allows for a high-sounding phrase: “lashes with more polygons than a character on Xbox 360”

“And thank you very much”, you will add: inevitably any character on Xbox 360 would have less defined eyelashes than one who enjoys Unreal Engine 5, yet with his tech demo il dream team The Coalition (Microsoft) seems not to have shot it big. The short video shown at GDC 2021, Alpha Point, hasn’t been released publicly but it sure knows how to get talked about. What you see in the footage is just rocks and ruins, with the occasional diamond hanging in the air. What is striking, if anything, is the number of polygons: according to Kate Rayner, the development of the graphics engine is still at the beginning.

Alpha Point was born as a tech demo for Unreal Engine 4, and according to Colin Penty of The Coalition the number of triangles present in a 3D model does not fall below the threshold of 300,000. The maximum, on the other hand, is about 500.000: fifteen times what we saw in Gears 5 just two years ago. The lighting limitations are there, but if Tim Sweeney of Epic Games has talked about full photorealism (by 2036) there is a reason. The sentence with which we opened the article alluded to the fact that a character’s eyelashes in the new game engine are literally more defined than an entire 3D model on Xbox 360. 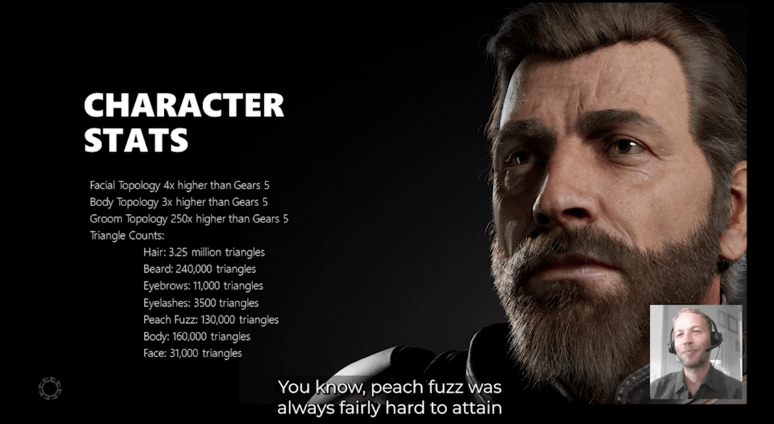 We are talking about 3500 triangles, which Colin Penty defined correspond to the “budget of an entire character” just two generations ago (or one, if you count Xbox Series X and S as next-gen). The focus on Microsoft platforms is understandable: Alpha Point was born as a response to Lumen in the land of nanites, tech demo for Unreal Engine on PS5. Even then the setting consists of rocks, ruins and debris, but this talk of technology only sends us into salivation at the idea of ​​whatever The Coalition is doing right now.

Now it’s up to you to tell us yours: what do you think of the statements released? Let us know below, and as always don’t forget to stay on TechGameWorld.com for all the most important news for gamers and more. For your purely gaming needs, you can instead find the best discounts in digital format on Instant Gaming.