Do you like robots? If so, then surely you will like The Iron Giant based on the novel of the same name

We are in 1999, just before the new millennium, and the director Brad Bird is struggling with what will be his iconic first work destined to remain on the list of the best cult movies ever!

Strong also in the production of Pete Townshend (historical guitarist of Who) the film, probably due to the more mature themes and the absence of songs, its takings did not exceed approximately $ 50 million in budget initial.

Based on the book namesake of Ted Hughes del 1968, the film in question has been adapted for a cinematic audience. So what was the final result? Well, to find out all that remains is to let go of the chatter and continue reading together!

The plot of The Iron Giant | The must-sees of animation

We are off the coast of a small town in the Maine, yes the state so dear to Stephen King’s tales, by name Rockwell in 1957. In the world the first cries of rock ‘n roll are going crazy, the Second World War is over a few years ago, but what is not over are the tensions submerged, more or less, between the United States and the then Soviet Union.

Taking this historical preamble into account we return to our town, not to be confused with Roswell of the famous UFO crash. A fishing boat is in the middle of a storm when suddenly it sees one of them raining mysterious meteor from the sky that ends in the sea.

A moment of hesitation, a hallucination perhaps ?, and then salvation, here is the lighthouse! But, wait, a lighthouse does not have two eyes that stare at the boat and bite into it as if it were a sandwich. Curious, right?

Fast forward where we see the life of one of the protagonists of our story, the bambino Hogarth Huges who lives with his mother in a country house. The money is a bit scarce, the mother works in a classic American diner, and therefore it is necessary to rent some of the rooms (like Forrest Gump to be clear).

Be that as it may, our protagonist is a real fan of animals, which his mother does not allow him to keep on time, comics e science fiction. In short, a fairly ordinary life divided between school and imaginary characters from strips and films.

But you certainly haven’t forgotten about the meteor, have you? That’s right, why this is back and has the appearance of a giant robot greedy for metal. Although he no longer remembers where he came from, he only knows that he likes metal a lot and so why not get one snack with the power plant?

At that very moment our good Hogarth is watching a science fiction movie on television, where an evil brain escapes from an unidentified secret laboratory, when the signal is cut off. So he goes out to see and discovers that the antenna has been detached cleanly.

So the time has come to investigate, direction of the power plant with shotgun and camera ready to capture the moment. At the same instant, Hogarth will therefore make acquaintance with our robot (and no, it’s not Mazinger or Mobile Suit Gundam) while you are about to electrocute yourself with the high voltage cables.

The moment is critical and therefore he decides to turn off the whole system with the safety lever and thus save his new metal friend a few tens of meters. As said before, the gigantic being he remembers nothing about himself due to a blow to the head, but the point is that it is now at the level of a child little one who does not yet know how to speak and tends to imitate everything he sees and hears in order to interact with the world.

This contrast will therefore be the driving force for a whole series of hilarious gags, such as when he tries to speak, until other characters enter the field. How easy it is to guess, if your mom doesn’t let you keep even a squirrel, but if you happen to have a super robot how can you not keep it?

That’s right, and this is where things get a little complicated! First of all, due to the numerous reports of bitten machinery, theagent special Kent Mansley. A really exaggerated villain for being paranoid, moody and even ultra patriotic with a passion for national security.

Hogarth will therefore try to hide his new friend from the authorities with the help of Dean McCoppin, a junkies with artistic ambitions and a lover of jazz and Jack Kerouac, but have you ever tried to hide something so colossal?

Ah, and as if that weren’t enough, he decided that his buddy can become a superhero able to fight against evil. But deep down it’s a war machine, will manage to maintain control necessary in order not to hurt the innocent?

For sure it is not an easy feat, mostly because Agent Mansley has decided to settle into the Hughes’ house to continue conducting his investigation in the most annoying way possible.

So will our heroes make it? To find out, then prepare yourself for a series of unexpected events, risky actions, laughter, but also profound reflections on existence itself, the roles we are going to play, the acceptance of the different, death (also thanks to that of a deer, other than Bambi ) and much more without Disney songs. 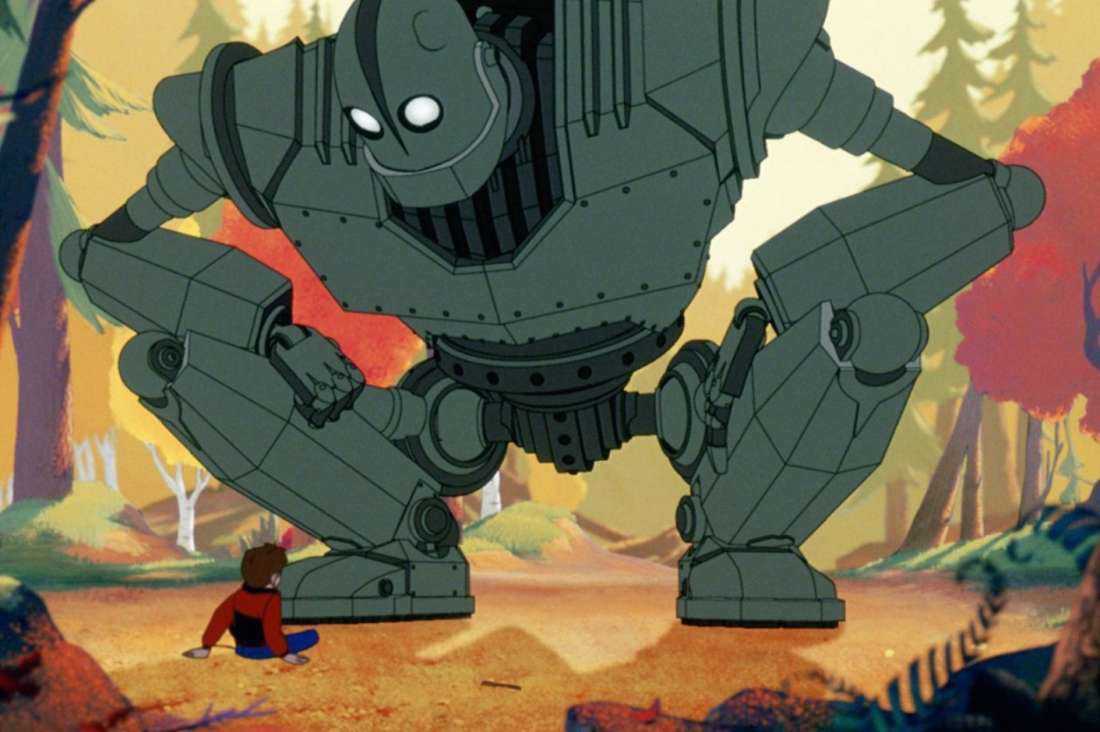 Those fabulous fifties | The must-sees of animation

In addition to the setting itself, throughout watching The Iron Giant really feels like you’re in those fifties described by Happy Days or by the many films stars and stripes, as demonstrated by the promotional posters of the film that came directly from the graphics of those years.

Anyway, this period is well recognizable by some details such as the music in the style of Jerry Lee Lewis, in comics like Superman and Spirit (not the horse, of course) or magazines like Mad Magazine.

Other clues are the americanissimi diner with the maids in pink uniforms or the science fiction programs, but let’s not forget that we are always in the period of the Cold War.

The Berlin Wall has yet to be built is true, but the Germany it is however divided between the Western and Communist blocs and the war in Korea it is still well etched in the minds of Americans and beyond.

The weather globally it is therefore tighter than a violin string while playing it with a sharp razor and the cartoons they show Hoghart and his classmates prove it.

In these animated shorts in fact, an anthropomorphic animal is shown which, smiling and with a helmet well pressed on its head, explains how to curl up and take refuge under the counter helps to survive a nuclear attack.

Don’t they remind you a little of the movies on Fallout? Yet it was the reality that many people lived through because of the constant nightmare of a nuclear holocaust that would disintegrate the whole world.

The faces behind the metal | The must-sees of animation

The iron giant, although it is not known whether he will come from space or the USSR, however, has a cast absolutely not to be underestimated and who knew how to immerse themselves in this particular type of atmosphere.

His voice is in fact voiced by Vin Diesel (a bit like he did with the mythical Great in Guardians of the Galaxy), the young Hogarth is Eli Marienthal (seen in a couple of American Pies), his mom is Jennifer Aniston (one of the “survivors” of Friends), junkies Dean is Harry Connick Jr. (famous for singing on Harry’s soundtrack, meet Sally…) and finally Agent Mansley is Cristopher McDonald (famous among the little ones as one of the voices of Ben 10).

It also seems that the film, originally, should have been a musical based on the notes of The Iron Man: A Musical of Pete Townshend who, as mentioned at the beginning, is also the executive producer.

Finally, as for the director Brad Bird, after this fabulous first work of his we will find him again behind the camera for both chapters of The Incredibles, Ratatouille, Mission: Impossible – Ghost protocol e Tomorrowland – The world of tomorrow. Do not forget his participation in some episodes of the legendary Simpsons!

Wanting to close the anecdotes section of the film here, you should know that the surname of the young protagonist is the same as the author of the original book and we can find our robot in Ready Player One (practically there was the world and even more!) and in an episode of Futurama “interpreted” by Bender (the Bender who will offend you).

Anyway, in the face of the first work! In this film, which you absolutely must recover as soon as you can, you will understand how in a cartoon there can be more messages than they seem.

In addition to this there will also be much more than a profound reflection to do, both historically and in terms of the meaning of life, and this applies to audiences of all ages.

However, to know all the other hidden treasures of animation, the TV series of the moment and the most exciting films ever, we recommend you stay on TechGameWorld.com. Until next time and, watch what might fall from the sky!