In this review we will take a look at The Kids We Were, an adventure dictated by time travel and the solving of small puzzles, which will immerse the player in the troubled childhood of a Japanese boy who is as young as he is brave.

The stories built around time travel have now been tested within any videogame genre. In addition, recently there has been a sort of awakening of this narrative, recurring in various titles, starting for example from Deathloop and its irreverent gameplay action, to a style that leads to gradually learning the characteristics of the game as in Returnal. In addition, there are also games that place time travel not just how an additional element that makes up the gameplay, but also making him take on a necessary part of the plot, introducing the actual story, as in Life is Strange,

Regardless of the way in which it is used, the power of time travel is something that human beings have always desired, and even the theories and hypotheses relating to it alone allow to give space to the formulation of infinite possibilities. Not for nothing did time loops give birth to a large number of entertainment media, with renowned forefathers of classical literature and cinema. Everything surrounding this sci-fi illusion is a source of great inspiration for creators, especially the most imaginative and obsessed with give a change to the immovable will of fate. After all, even if time is not reversible in reality, our imagination in any case remains a way to overcome these limits.

To our detriment, the moments flow inexorably without the possibility of return, while what remains to accompany us is almost always the series of alternatives that we have not considered, or the decisions that we carry on our shoulders, and the memories that pursue us or that escape us incessantly. Despite the imperious truth, and being aware of how impossible it is to retrace the steps taken throughout our life, we do not hesitate to get lost in disappointments, even when we recognize how far they are from the harsh reality.

And here then you are prey to sensations capable of unleashing the beating of our heart at the thought of the old days, and make the eyes shine with hope still present then. The emotion in question, nostalgia, is sometimes considered as a real disease, and the same will have no qualms about reappearing in the game that will be discussed in this new review, or The Kids We Were.

Story of a summer in Kagami

As stated, the review we are going to do will concern The Kids We Were. It is a game with a constant based on time travel, combined with the resolution of some puzzles, on which the entire plot of the title will be structured. The game was initially designed to be played on mobile devices, and has achieved considerable success, taking first place in the ranking of best Indie game in the category of the best titles of 2020 on Google Play, along with additional awards and accolades.

The tones that will animate the story will be capable of giving rise to a swing of feelings, oscillating between the emergence of the elements that reveal the tragic nature of life and elements that characterize the simpler and more candid parts of it. This will be done thanks to the cast of characters, who with their innocence given by the childhood age will be able to provide a less “polluted” point of view than that found in an adult, who perhaps would have long since gotten rid of aspirations and hopes born at a younger age. 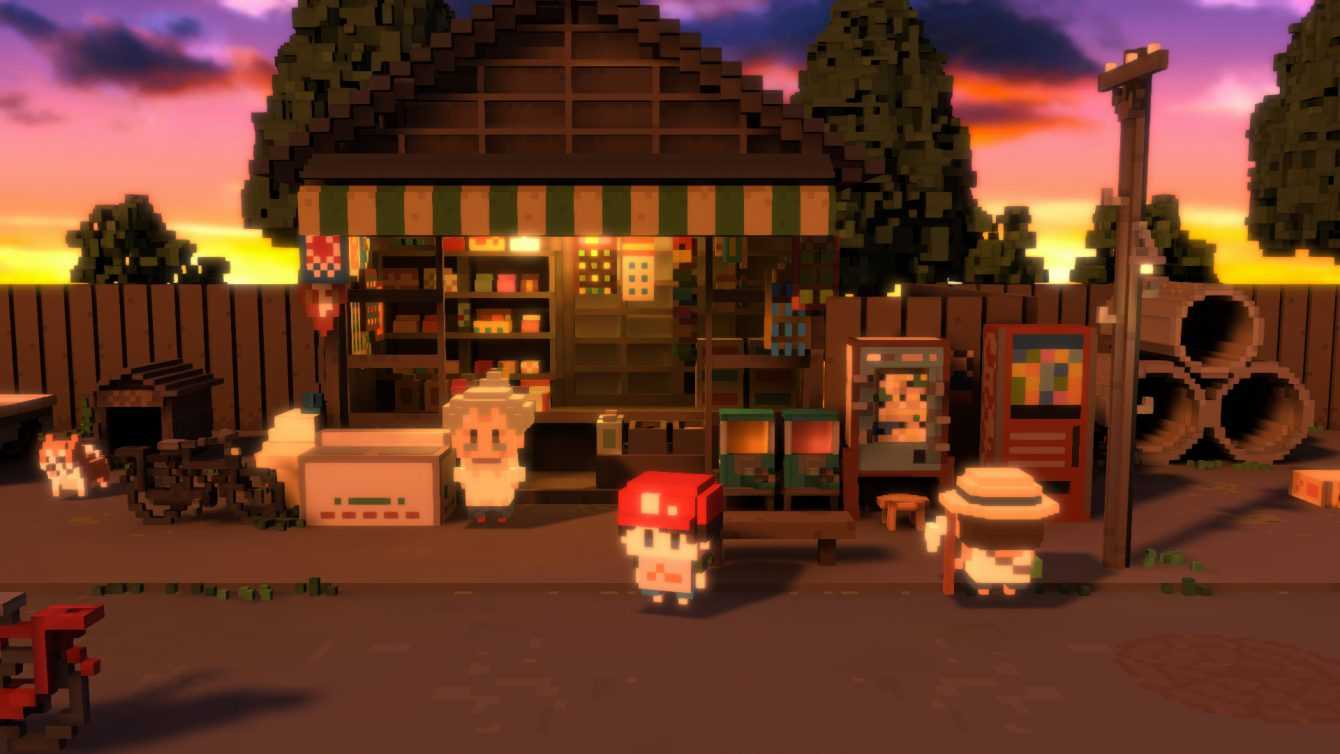 Fatal Encounters – The Kids We Were Review

From here on we will begin to introduce the story of The Kids We Were a little more in detail, describing in our review some key points that will take place at the beginning of the game. The title will open with what is defined a kind of urban legend belonging to Kagami, small town located in the more peripheral parts of Tokyo.

In it will be introduced the popular belief concerning an event that takes place every 33 years, in conjunction with the passage of a shooting star. A powerful being, called Magi, coming “from the most distant shores of eternity”, would arrive on a ship plowing the tides of time. Apparently, those who will assist him when needed will have a way to fulfill their greatest wish.

After this premise, the scenario behind the entire gameplay experience will be presented. In 1987, at the end of the Showa period in Japan, we will go to impersonate Minato, a young 11-year-old boy, while we travel with his mother and little sister. The family in question will appear immediately affected by several problems: the mother is divorced and appears to be in rather poor health, the father has not been seen for many years and the children do not even know his face. The three will come to Kagami on the occasion of a memorial ceremony, to commemorate the disappearance of some old acquaintances of the mother. 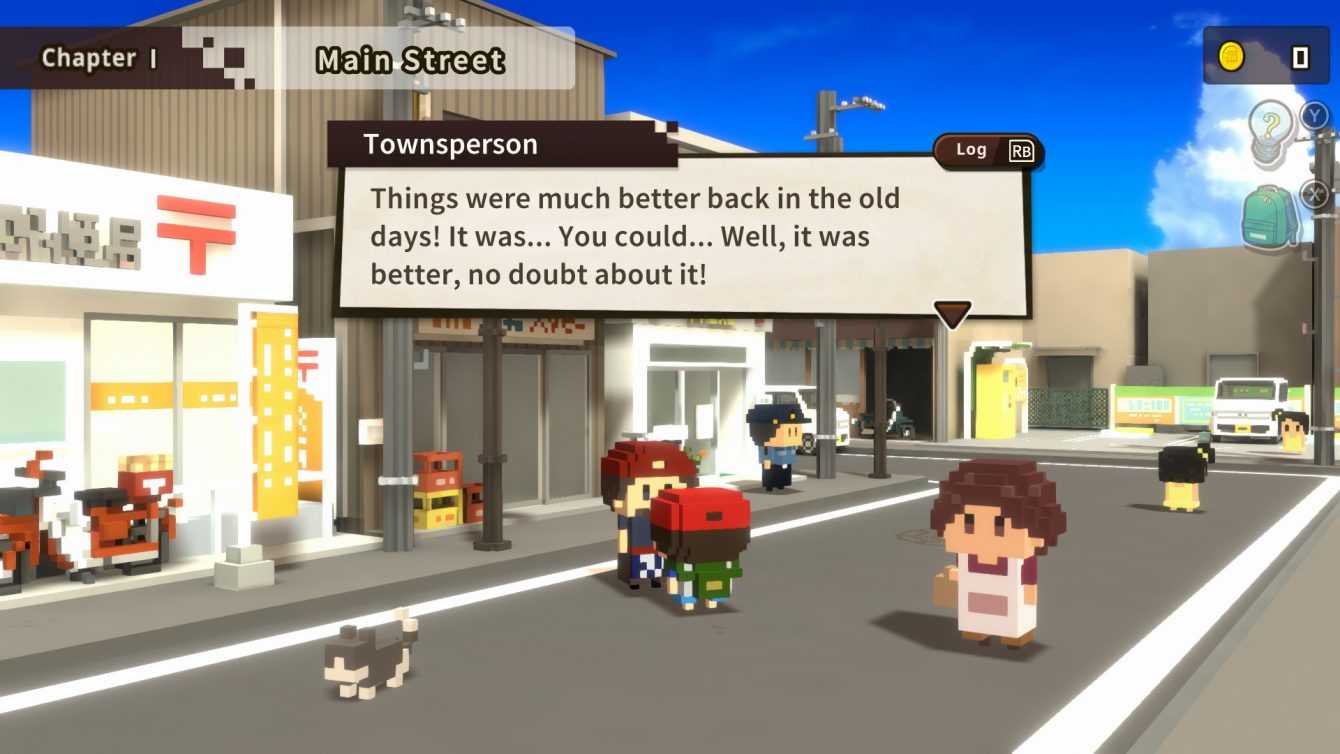 In this quiet town, Minato and little sister Mirai will actually have an important mission to accomplish: that of find your father after finding out how he still lives in Kagami. More, Minato would have further motivation, which he will call “an ultra mega red code REAL top secret mission”. When the mother is busy following the ceremony, the two will start investigating. Suddenly, Minato will be overwhelmed by a daydream, suddenly finding himself in a cemetery, conversing with a Buddhist priest; in reality, these dreams seem to have been bothering him for some time, leading him to talking to unknown people in places you have never visited.

Upon reaching the Minato cemetery he will really meet the priest, from whom he will learn of the sad fate of his father, who has been deceased for some years now. on that very day, also identifying his name on the family tomb. Minato will be perplexed by the situation, since he was able to foresee this sad revelation already in the vision of a few moments before.

The priest will then give the child a mysterious notebook, titled “the Seven Mysteries”, which previously belonged to his father. Here we will also learn about Minato’s hidden intentions: he was looking for a bone marrow donor for his little sister, who suffers from a very serious disease and needs an operation. This would be his only chance, and after realizing he couldn’t save Mirai, Minato will begin to despair. 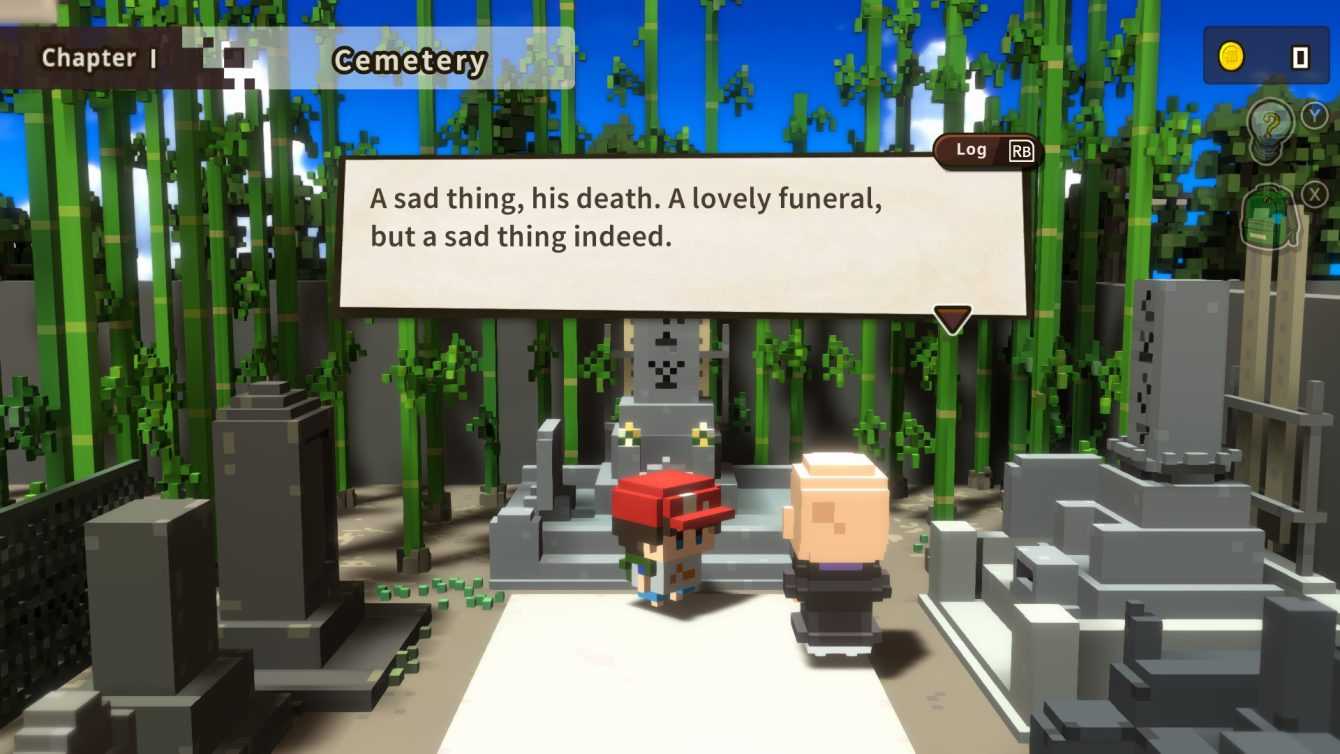 Soon after, a new vision will soon lead him to enter the temple of Kagami, which appears to be on the verge of being demolished. Sneaking into a closed access area, Minato will have to deal with a peculiar cube-shaped machine, exhumed from the ground only recently: from this point on, the situation will take a significant turn. In fact, in front of Minato’s eyes, the one who claims to be the child himself will present himself, but 33 years into the future. Claiming that he has failed to alter the fate of the family, Minato will give his younger version the daunting task of going back 33 years in time, in order to save his family by solving the seven mysteries written by his father within the family. notebook.

Unsure what to do, another vision will show a new tragic event at the station, and thus will make him fall to the docks: however, at that moment the mother and the little sister will not seem to be in danger. But when the worst seems about to happen, with Mirai getting too close to the yellow safety line, Minato will be able to save her and thwart the fate revealed a few minutes earlier.

Having realized the veracity of the visions that plague him, Minato will finally be determined to fulfill his mission of protecting his family, thus being launched in the middle of the Showa era. They will have only 72 hours to solve all the mysteries; once the time runs out, the boy will return to the present, and it will no longer be possible for him to try the time jump again. 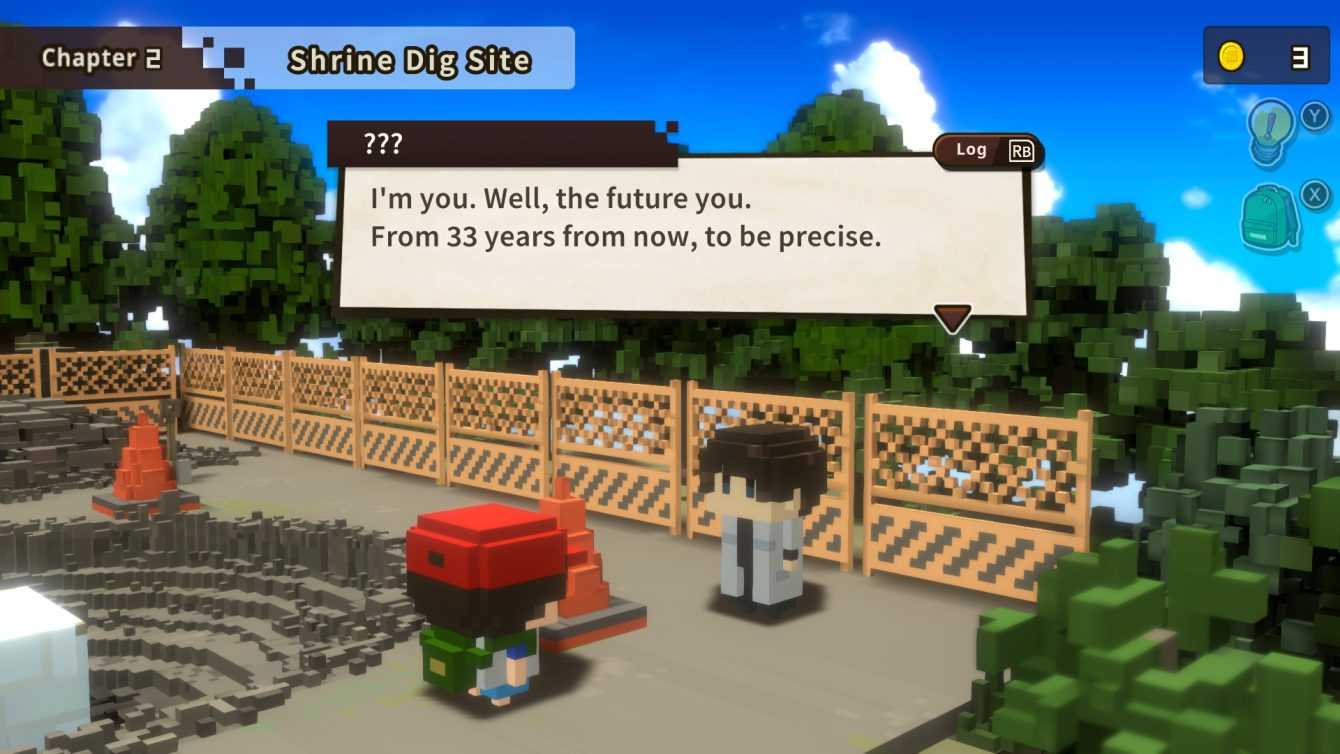 Sharpening the Eyes – The Kids We Were Review

Time travel therefore plays an important role in the game’s plot, but in our review we believe thatexploration of the locality in which The Kids We Were is set is one of the focal points of the gameplay, and a more than necessary part to be able to continue the narrative thread. The story may be advanced as we go to visit the different areas of Kagami, and in the meantime we will have the opportunity to collect various objects in vogue during those years. Inevitably, they will tickle the nostalgia of many people, with small descriptions useful for rediscovering the thought and value that these mementi possessed in the eyes of those who lived in those times.

Minato will be able to converse with every character he meets in the game world, thus becoming aware of the ideas and concerns of the inhabitants. Also, dialogues will often present the possibility of select an answer from several multiple choices, although only one will be the correct one. In any case, we will be allowed to try more answers without any penance, until we have found the most suitable one. Going to solve the not too elaborate puzzles, sometimes these will lead us towards rather funny or bizarre events, and which will help to give a feeling of involvement in the life of the city.

The title glosses over some details, such as the motivations behind the time travel capabilities provided in the game; and while the lack of clarification ultimately remains a marginal aspect and often present in time travel stories, it is still a factor to be indicated in the review phase. 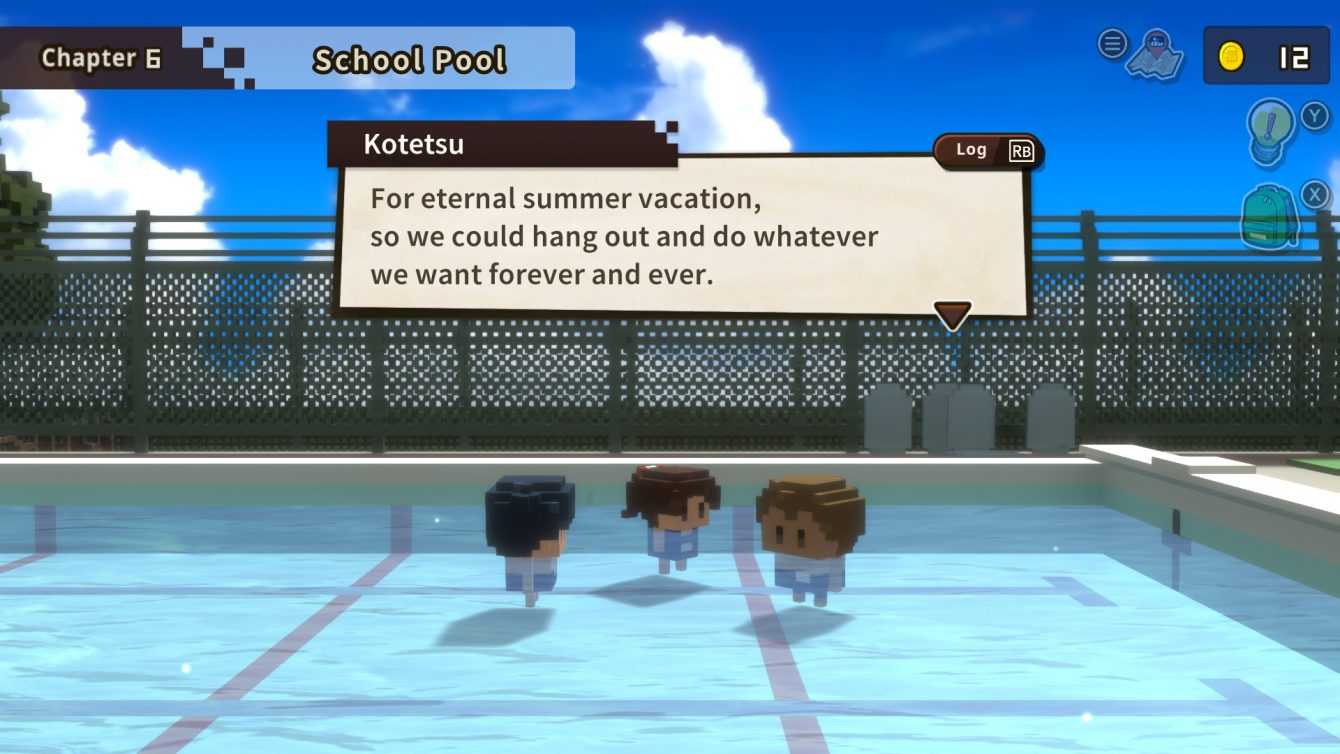 Amarcord of melancholy – The Kids We Were Review

The nostalgia mentioned at the beginning of our review of The Kids We Were will emerge above all in the eyes of those who were able to experience the change taking place in that period in Japanese society. The title will in fact present a vision of Japanese life in the 80s, a moment that has generally characterized major developments towards every aspect of life, especially as regards technologies and the economy.

In those years, the traditions of a past legacy clash more and more with the impending urban modernity, and no way out will be left to the minds still taking refuge in the past. In the game, the arrival of progress and the changes it brings they will affect the inhabitants and the fate of the characters with which we will interact, despite it simply hovering in the air during our past stay, only to present itself violently in the future.

For the Japanese of today, the Showa period was a romantic era, and is currently viewed with affection and melancholy: the state of the country in the early 1980s, which placed it among the richest nations in the world, is seen all over. now by the population as a time of … 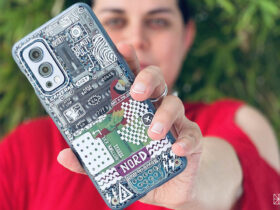 The OnePlus Nord 2 review. The smartphone we’ve been waiting for

Final Fantasy XIV review: Endwalker, the end of an adventure and the beginning of a new era