The Lord of the Rings is among the most famous literary works of all time, but before the Jackson trilogy there was a cartoon that we will talk about in a review today

It was the 1978 and finally, after years of bounces, cancellations and postponements, JRR Tolkien’s work sees the light on film in the guise of a Cartoon. But it was not a cartoon like many others given the use of the rotoscoping technique and the direction of Ralph Bakshi.

A director definitely against the tide who had already made his directorial debut with the social and political satire of Fritz the Cat (1972) and that, in his subsequent works, he never spared ferocious criticism of racism and modern society with its many contradictions.

To bring to light theimmense work of the Professor, Bakshi has therefore opted for the rotoscope technique which manages to make human figures more or less “match” and animated at the same time. The director himself then used it several times in the course of his works, but to arrive at an effective interaction between flesh and drawings, it would have had to wait for the 1992 with the disappointing Escape from the world of dreams.

Anyway, The Lord of the Rings cost about $ 4 million and Bakshi’s “experiment” grossed more than $ 30 and also received a nomination for theHugo and for the Saturn Award. Sure, crumbs compared to Peter Jackson’s global success, but for once we won’t talk about him. A hybrid animated feature film, I said, that he divided the critics and the fans between those who praise him and those who deny him, but then lost in time like the Ring before being found by two fishing hobbits.

In a very, very, remote past, great iron craftsmen forged magical rings. Nine were for men, seven for dwarves and three for elven kings. But at some point, the Evil One learned the technique of forging iron and made the strongest of the rings. The one that would dominate others

With this prologue on red background, some black figures depict the genesis of the Ring and its consequent war and decline until the discovery, after years of oblivion, by Sméagol and his unfortunate cousin Déagol during a day of fishing on the river Anduin.

There Sméagol will kill his cousin asserting that he wanted the Ring only for him since it was his birthday, his influence was already showing, only to be chased away by his own people by adopting the name of Gollum, a sort of nickname that came to him bestowed for his guttural verses, during the exile in the mountains.

Among cold stones and evil goblins, the Ring will be found by the brave Bilbo Baggins (protagonist of The Hobbit) who will use it to escape from a furious Gollum for losing a riddle challenge. To sum up The Hobbit well, I suggest you recover its comic version edited by Bompiani. The years pass quietly in the Shire and Bilbo spends a very long life full of comfort and carefree thanks to the presence of his “nephew” Frodo, but the shadow of Sauron has returned to shake Middle-earth and the sorcerer Gandalf knows it well.

The Ring must be absolutely destroyed and it will be the turn of the Fellowship of the Ring embark on this crazy enterprise along the enchanted territories and the mysterious creatures that populate Middle-earth. Of course this is a very reductive description of the plot, but I think that more than 90% of you know it well and therefore I would say to proceed with the analysis of Bakshi’s film which, unfortunately, does end his events after the victory at Helm’s Deep leaving room for an unreleased sequel.

Obviously to the exclusion of The Return of the King of 1980, animated film for English television made by the same authors of the animated version of The Hobbit (1977). But let’s get back to Bakshi! 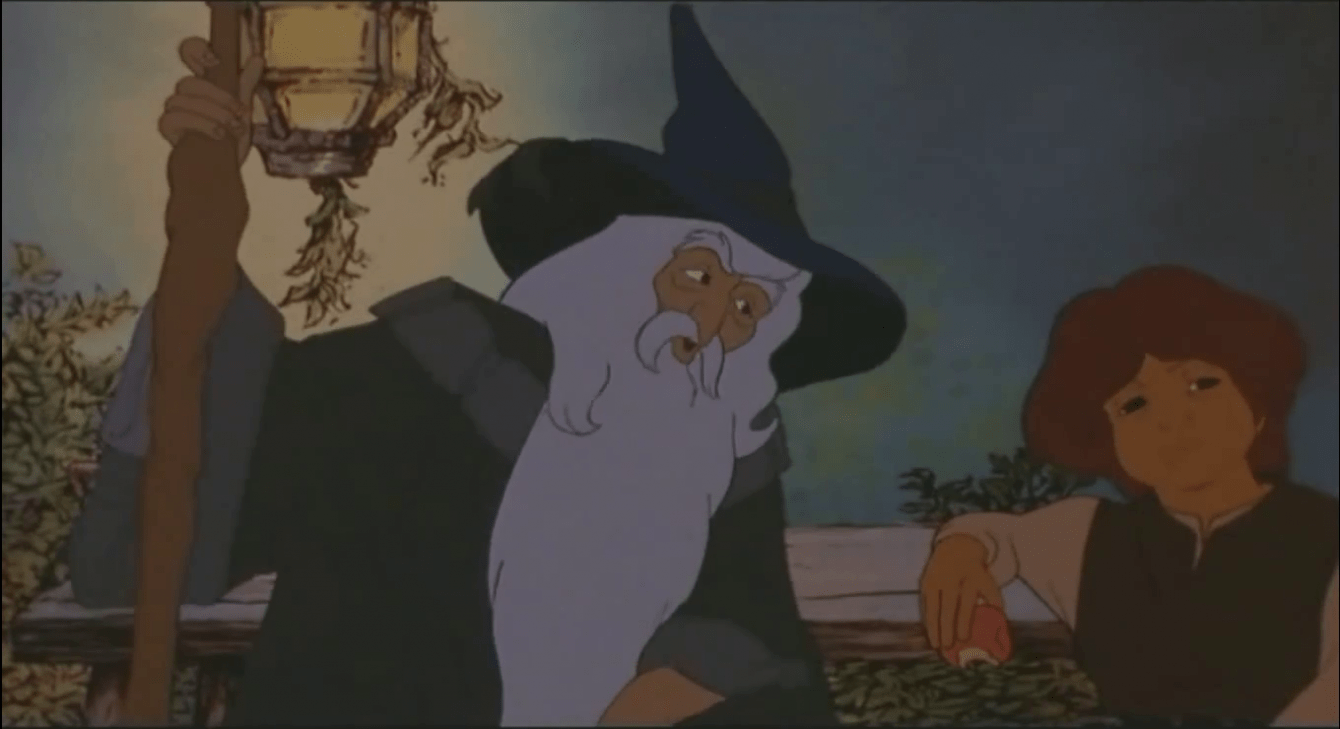 A troubled genesis | The must-sees of animation

It is undeniable that the Lord of the Rings has seen numerous attempts at transposition as evidenced by the one, never successful, of the 1967. In fact, it seems that Stanley Kubrick wanted to make a film based on Tolkien’s work starring the Beatles! Who knows how it would turn out, we will never know, but we still know that United Artists bought the rights to the book for just over £ 100,000 in 1969 entrusting the direction to John Boorman (A quiet weekend of fear, Excalibur and The Tailor of Panama among others) who would write the screenplay together with Toad Pallenberg.

Unfortunately this was very different from the book, not to mention controversial, since, it seems, there should also be a sex scene between Galadriel and Frodo. Add to this the fact that there wasn’t too much budget for Boorman ed’s other ideas either the director was fired. However, he will pick up some of his ideas for Excalibur from 1981.

From there some time passed and, finally, the ball passed to Bankshi who had already had some ideas in mind for years now. This time the script was entrusted to Chris Conkling and the fantasy writer Peter S. Beagle who, together with the director, opted for a narrative more faithful to Tolkien’s work.

The music instead they were entrusted to the American composer Leonard Rosenman (Burnt Youth, Hell Is for Heroes, A Man Called Horse and Barry Lyndon among others) whose end result was, certainly, less epic than those of Howard Shore, but well orchestrated and with many folk and medieval parts. The songs sung by the same characters then did the rest, then keep in mind that the book is full of poems and songs, helping to keep a much more fairytale and faithful atmosphere to the literary work.

A character who embodies this well fidelity is definitely the prode Aragorn who looks like a middle-aged man, albeit older, looking a bit scruffy and with a broken sword. In addition, in Colle Vento, he tells the story of Beren e Lúthien. 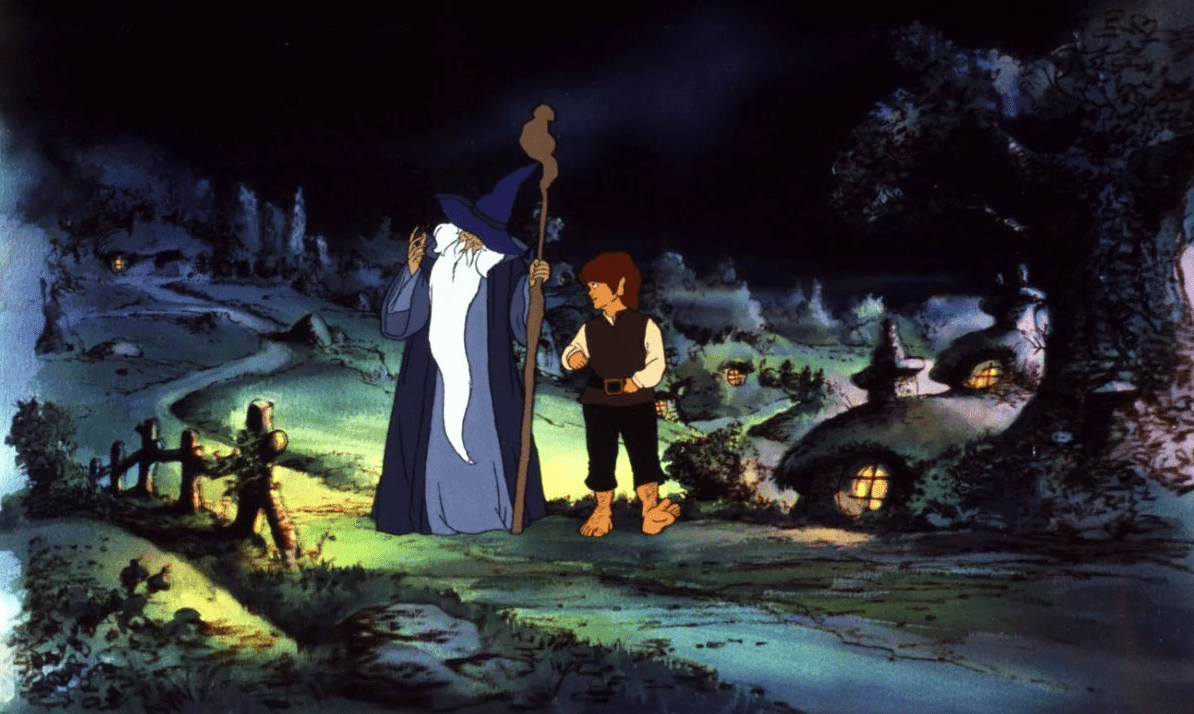 Unfortunately the rotoscope didn’t really work well in all the scenes, except for the prologue, the interventions of Ringwraiths and few fights, and there are two antagonists who have “suffered” the most. In the prologue, the shadow of Gollum, but she is extremely “puppet” and far too clumsy. Furthermore also the Balrog of the Mines of Moria he is little more than a man in costume dressed as a devil, a real shame.

Also in Moria the effect conferred on sword wounds it looks like little more than a drawing done on a photograph, but at least the sequences with i Nazgûl, especially animated, are noteworthy and convey the right anxiety.

Another element that makes you turn your nose up a bit is definitely a Sam who is far too comical and clumsy, in the book and in the films it is practically a war machine, but perhaps it is also the “fault” of Italian dubbing. Between English pronunciations, for example Underhill instead of Under the hill, and others in the elven language or in common at times dubious, still does a good job except for a few weaker moments.

But perhaps the biggest flaws are the inclement passage of time, it’s not that the film has aged very well, and the fact that it stops shortly after battle at Helm’s Deep. A battle that could have been masterful, epic, with clouds of arrows in the sky, weapons clashing, shouts of captains to overcome the clash of weapons, but the rotoscope does not forgive. So it goes sometimes. 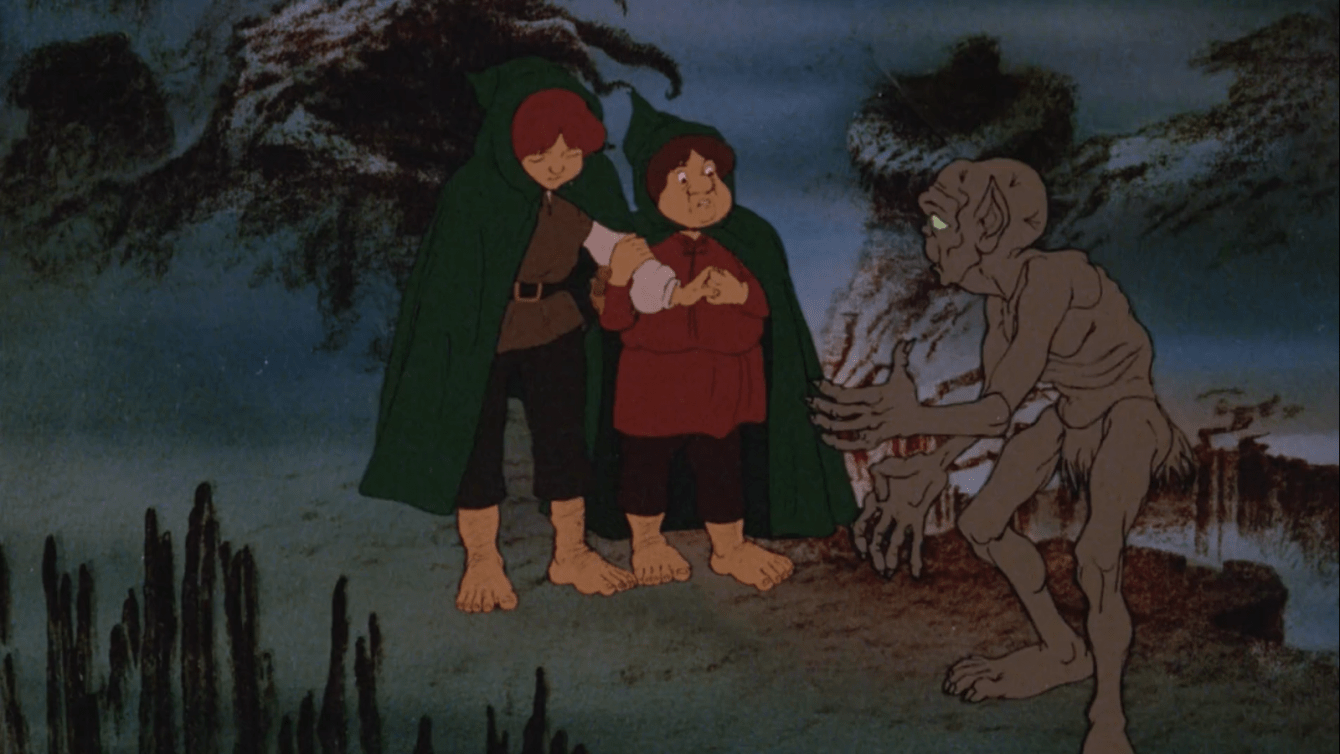 The similarities with the work of Peter Jackson

Of course Peter Jackson he was greatly influenced by Bakshi’s work and, like him, he decided to cut some parts and be directly inspired by the directorial solutions used in the animated feature film. One above all is the prologue which, despite some flaws of the rotoscope, works very well as an introduction to the events for the viewer and immediately explains the genesis of Gollum (which Jackson will leave to The Return of the King).

For example when Bilbo appoints i surnames of friends and relatives on his 111th birthday and a hobbit with his feet on the table does not fail to make his correction felt, when the four hobbits hide from the Nazgûl under the roots of a large tree in the woods, when the Ring “falls” on Frodo’s finger or when the Nazgûl gut the beds with sword strokes.

Among the cuts that both directors have adopted, those relating to the characters of Fredegario Bolgeri known as “Grassotto” and Tom Bombadil. Furthermore, the small group of hobbits seems to be jumping on a par some chapters of the book such as A Shortcut to Mushrooms, An Unmasked Conspiracy, The Old Forest, In Tom Bombadil’s House and Nebbia sui Tumulilande to name a few. 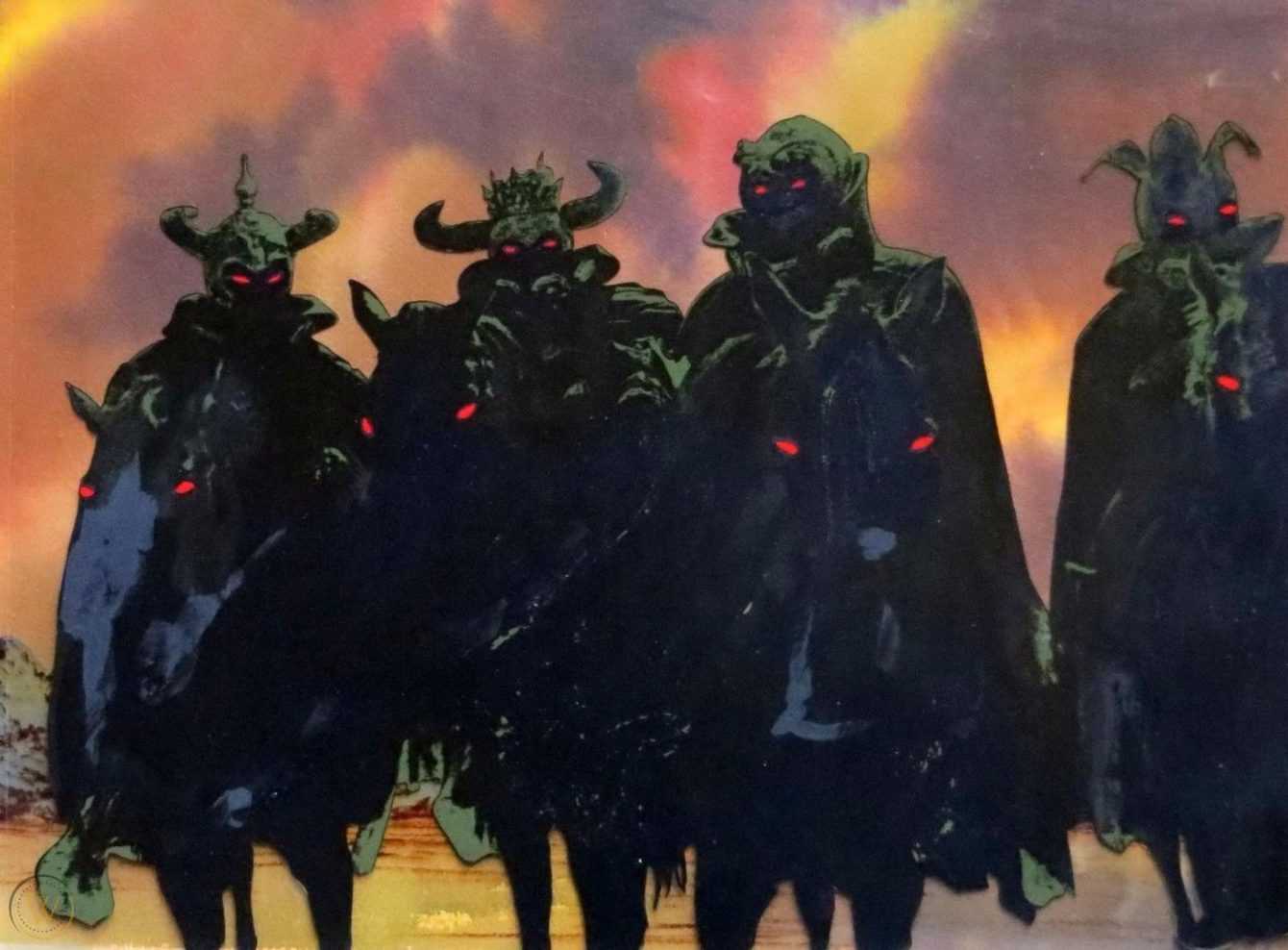 Conclusions and legacy of the Ring | The must-sees of animation

The Lord of the Rings it is much more than a simple book and the thousands of fans around the world know very well that, in Tolkien’s works, they have found a world of exciting adventures, ancient languages ​​and immortal characters. The influence it has had on imagination and creativity general is then comparable to the strength of Mount Fato that erupts and bands that have been baptized as some places or characters in the book know it, see Rivendell, Cirith Ungol, Burzum o Isengard for example, or others who have quoted some of his passages in their songs, Blind Guardian, Led Zeppelin, Rush, Wind Rose and so on.

In conclusion, the cartoon of The Lord of the Rings described at length in this retro – review yes, it has suffered the blow of time, but I’m sure the fans will want to give him a second chance, especially because many ideas and solutions were really spot on. Look at it therefore with a less critical and more dreamy eye remembering when, as a child, they told you fairy tales before falling asleep or when you leafed through the pages of that dear book for the first time.

At this point we should put a noteworthy closure that summarizes everything in a few words, but perhaps it is best to leave us with a worthy greeting in Quenya, “elen strength lumens’omentielvo“. See you soon on TechGameWorld.com!