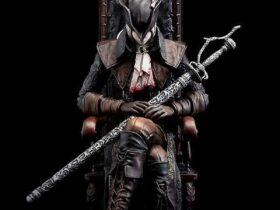 Bloodborne, Cyberpunk and more: here are the new Figma figures

Are you lovers of the recent revelation series, themed Star Wars, The Mandalorian by Disney +? Yup? Great, then the new set of statuette (with protagonists Ahsoka Tano e Yellow) presented in the last hours by the manufacturer Hot Toys it will probably make your joy. Let’s see all the details about it in the next lines of this article (photos included).

The Mandalorian: Ahsoka Tano and Grogu’s figures will be articulated in many points

The new set Hot Toys of figures in scale 1: 6 has as protagonists the former Jedi Ahsoka Tanomoreover, the “Deluxe” version of the same also presents the irresistible, as much mysterious, Yellow, two of the most beloved characters in the series The Mandalorian. The Jedi, made in PVC with dresses in real fabric, it will come with a range of respectable accessories. We list them below:

As if the statuette of Ahsoka Tano I will be a real action figure with various points of articulation who will be covered by the wide jedi tunic. The head will have movable eyes, the lightsabers will be interchangeable and the cloak will be in real fabric like the tunic.

The Grogu figure, which is part of the Deluxe set, is made with the classic detail of the Hot Toys figures and this too will have various articulated points (placed on arms). The set will be accompanied by a realistic backdrop that has the appearance of a forest lost. There will also be an exhibition base and a lantern. In short, there are precisely all the conditions to make fans relive the unforgettable first meeting of the two characters portrayed in the set of figures in question. Above you can admire the first official shots of the statuettes we are talking about. Staying on the subject The Mandalorian, have you already seen the new Death Watch bust? What about Hasbro’s Mando Black Series figures?

What do you think of this incredible set presented by Hot Toys? Are you giving us the proverbial little thought? Write it to us below in the comments section. Stay tuned on TechGameWorld.com for all the news and curiosities from the bewitching world of figures and more. Finally, for Funko POP !, LEGO, Star Wars, Disney, Marvel, Nintendo, Banpresto products and gadgets of all kinds at discounted prices, we invite you to take a look at the Zavvi.it store (Here you can find the selection of themed products Star Wars).