We tried Glyph, the new 3D platformer from Bolverk Games and we are ready to tell you what we think with this review. Our test took place on PC.

The review of Glyph, a particular 3D platformer

Glyph is the new title made by the Danish house Bolverk Games and looks like a particular 3D platform in which we will take on the role of the little one Glyph, a mechanical insect thanks to which we will explore new worlds and face solid obstacles.

Let’s not talk about enemies to fight with but of paths and roads that will put our patience to the test. If any of you are familiar with the genre and remember Kula World, we can say that this title remembers vaguely those vibes. The game mechanics and objectives they are more or less similar.

Our aim is indeed to find collectible items and proceed forward with our adventure: behind the search for these objects, however, there is a much more particular story. As we progress, as you can imagine, we will unlock more and more levels tough e difficult. However, let’s analyze the narrative sector which, although simple, is still interesting.

Our adventure begins with Anobi, a wise and important beetle who decides to bring us back to life. Through a particular ritual, Anobi makes us reborn in the form of Glyph, a mechanical insect with a goal: to restore the ruins of the civilization of beetles, once glorious.

In the course of our adventure, as we pass the levels, we will discover others information about this civilization. It is an interesting way of give thickness to a platformer. Now let’s move forward and find out what Glyph has in store for us.

Our experience begins with a tutorial level, in which other nice insects explain the game mechanics, the keys and what we need to do. From the beginning we noticed a fundamental aspect, namely i movements and their precision. Already from the tutorial you will realize how important it is have mastery and the total control of commands: it is thanks to this element that we will be able to move forward in the game.

Con Glyph we don’t have to go fast and finish the level in record time. What the title requires of us, however, is precision e attention. Just make a slightly wider or narrower turn to drop down into the sand and lose. So pay attention to the tutorial and, if necessary, repeat it several times.

During the tutorial we will learn how to move, we will collect coins, keys and we will learn a few more notions about what our robotic beetle is capable of doing.

The abilities of Glyph and the secrets of the title

If any of you have played Kula World in the past, you know very well what we are talking about. Kula World was that typical game, apparently simple, which actually played us anger much more than a shooter or other genres. There patience is the key to moving forward with similar games and is what we need with Glyph as well.

Our spherical-shaped friend can move as he prefers: obviously his movements will also depend on the you are familiar with the main keys and the mouse. Either way, Glyph can jump, make a squashed on the ground and also planar.

The rules of Kula World also apply here: if you fall or go off the predetermined path of the game, the penalty is death.

This is a real challenge. Are you a lover of challenges? Then find the beetles and get ready to say goodbye to your patience.

Inside the levels there are also some key whose purpose is to open one to the player escape from the level. They are present in all levels but they are not always easy to obtain. This means that you will have to explore the level thoroughly to find all the necessary items and also some secrets.

This aspect, and the Time Trial levels, turn out to be very interesting because they offer players various ways to have fun with the title. Lovers of‘exploration they will love going around the levels, looking for secrets and artifacts. Lovers of danger, on the other hand, they will love the timed levels. 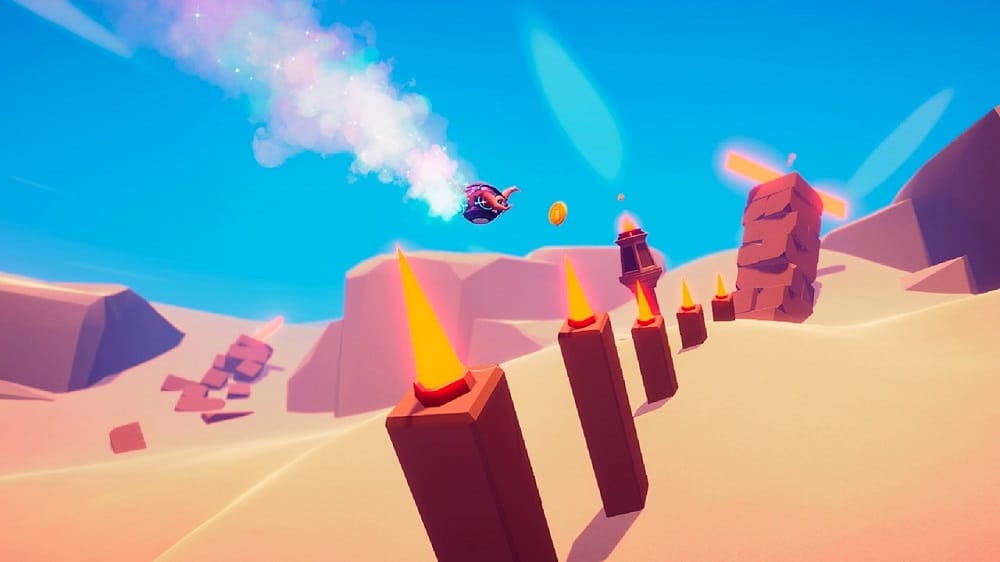 Glyph does not want to take a place in the ranking of the best games in the world but it just wants conquer lovers of the genre. Did he succeed? We can say of Yup. With this review we want to emphasize how much Glyph, with its simplicity and its vibrant colors, manages to offer a truly enjoyable gaming experience.

If you are a lover of 3D platformers and as a child you screamed at the top of your lungs with Kula World, this title is suitable for you. If, on the other hand, you love challenges or simply want to try a different game than usual, Glyph is the best choice. This is one of the main features of the title: it fits, in one way or another, to everyone.

The experience that Glyph offers is pleasant, interesting and also fun – although there are times when, at least we, we have almost broke the mouse from frustration. The beauty of games is also this.

With a minimal graphic sector, characterized by vibrant and vivid colors, suitable music and sound effects to this kind of adventure and a nice and spherical protagonist, Glyph welcomes us in its vast desert and is ready to test us.

To conclude, we remind you that the title is already available on PC via Steam and on Nintendo Switch.