Let’s see together, in our review, if even the older ones can enjoy The Smurfs – Felleaf Mission or, as per the premises, it is actually a title dedicated exclusively to the very young

Microids is a software development and publishing company based in Paris, particularly famous and appreciated for the plethora of titles dedicated to young people that it creates or markets every year. However, many also forget that, in addition to Marsupilami or the My Universe series, Microids is also behind the Oddworld series, the titles of Asterix or small pearls like Beyond a Steel Sky. In short, the key word, in this case, is versatility.

Among the titles indicated for the youngest, we recently had the pleasure (and we emphasize the word “pleasure) to try the new title dedicated to the Smurfs, a franchise that has been experiencing, in recent years, a sort of revival. Anyone born and raised between the 80s and the first half of the 90s will remember with pleasure the adventures of the little blue creatures. Microids has decided to start a kind of project, which will see, over the next few years, the arrival of four other themed titles. And given the premises laid with this chapter, we can officially define ourselves curious. Welcome to our review of The Smurfs – Fel Leaf Mission.

The main enemy of our little blue men is the plant that gives its name to the title. Felleaf is an evil plant created by Gargamel that has begun to expand in the kingdom, contaminating the lush meadows and even the Smurf village. Led by Papa Smurf, Quattrocchi, Strongman, Smurfette and Golosone will each take their own way to restore order to Pufflandia, eradicate (literally) the root of all evil and, why not, in the meantime also take a nice trip.

All thanks to the powerful weapon created by Inventor: the Smurfizer. This newfound technology will allow the Smurf on duty at that time to fire a special solution capable of eradicating the Fel Leaf and purifying the surrounding environment. Impersonating Smurfette compared to Quattrocchi or anyone else will not change absolutely anything in terms of gameplay, the various skills will be unlocked as the game progresses or by bringing the various materials scattered throughout the levels to Inventor, which can improve the Smuffer. 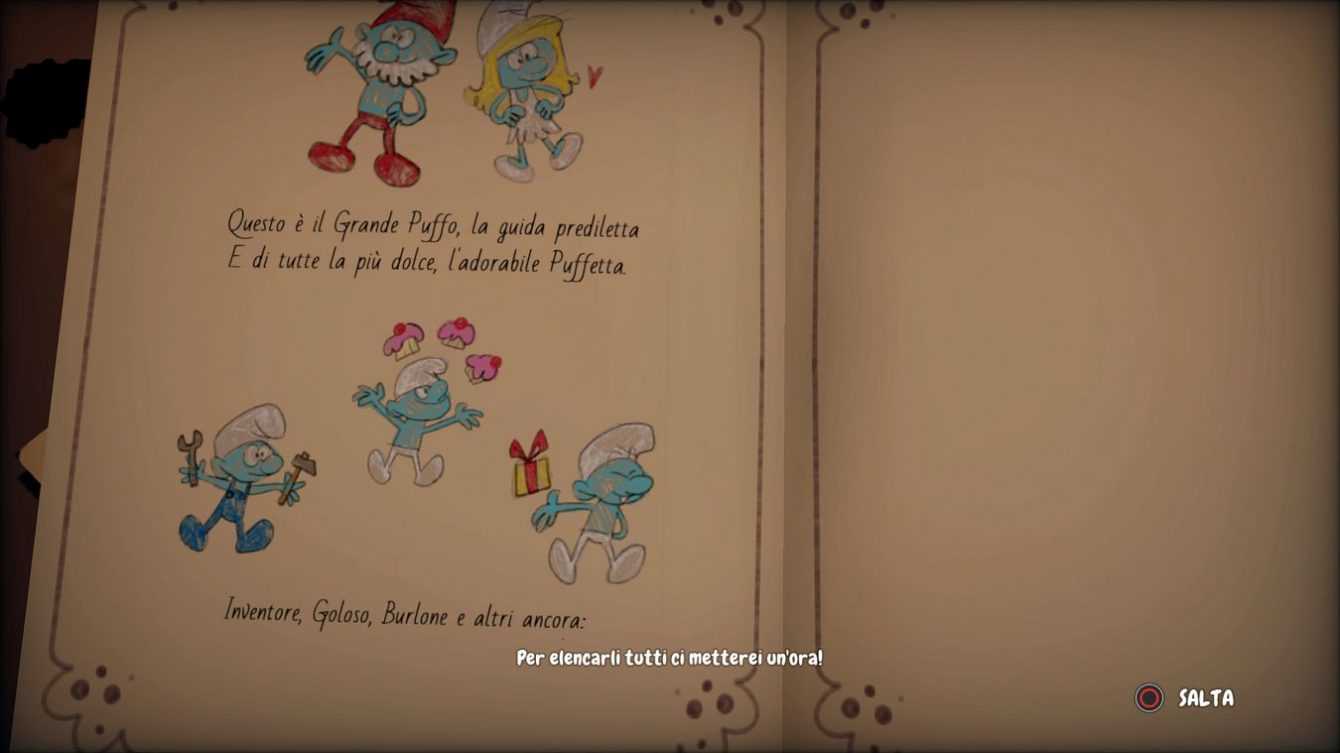 Smurf over here, smurf over there | The Smurfs Review – Fel Leaf Mission

If in the very first hours of the game the wandering in the various levels, all rather linear and not very articulated, to purify Vilplants or the like proved to be almost relaxing and fun, as the timer went on, we noticed a little big flaw in The Smurfs – Fel Leaf Mission: repetitiveness. The objective pointer will guide you firmly to the next goal, which may be to rescue a Smurf, pick up a particular object or pave your way to the next area. This is for every single portion of the map you unlock, without major variations or particular walls.

In fact, if you have to solve some more challenging puzzles to collect some material, the difficulty level of the title is obviously set downwards, given the audience it refers to most. The excessive linearity of the levels and the decidedly uninspired level design, however, certainly do not help to entertain the most experienced and experienced players, who will find themselves bored after a few hours. 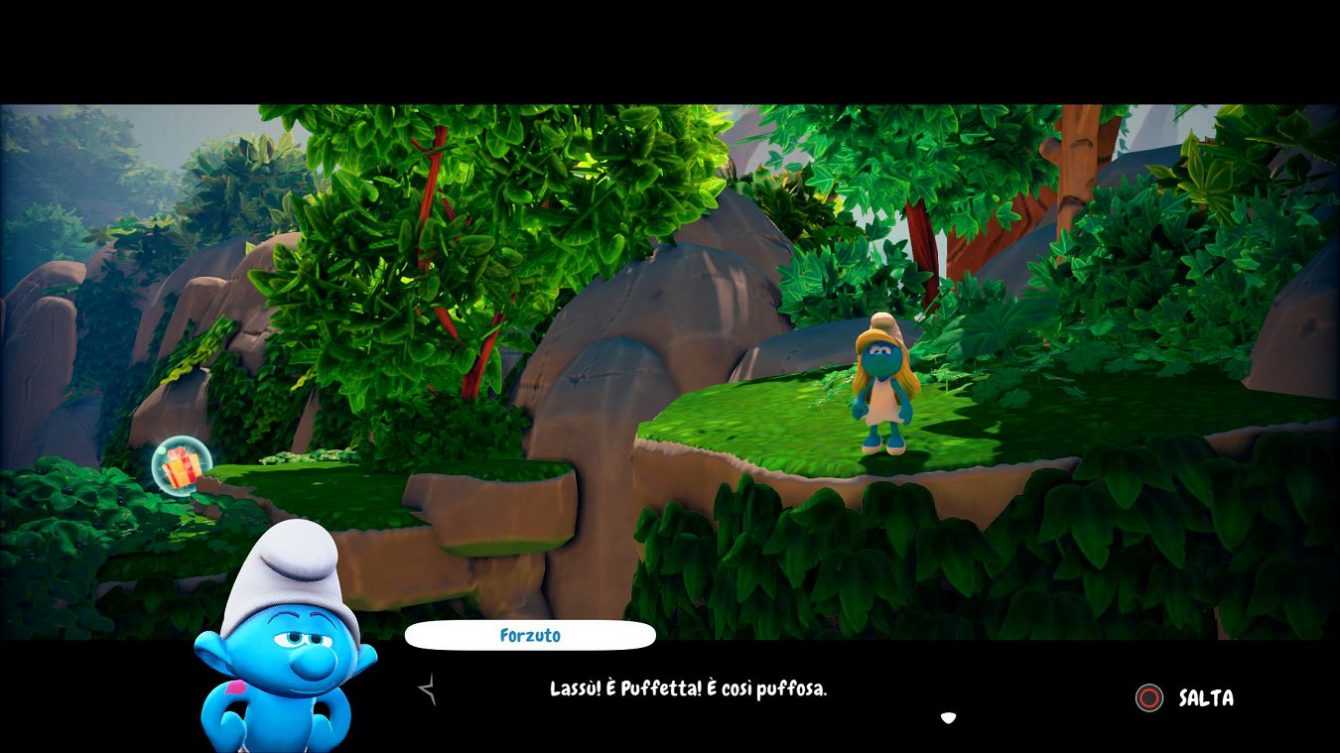 Smuffer as a way of life | The Smurfs Review – Felleaf Mission

The Smurfizer is the centerpiece of The Smurfs – Fel Leaf Mission gameplay. It works exactly like a cooldown weapon, this means that once you have used it for a while it will need a few seconds to “reload”. You can use it, based on what skills you have already unlocked per storyline, for gliding in flight, to make horizontal shots and to fight enemies, as well as, of course, to purify the various plants that you will find scattered in the levels. The latter are also equipped with a purification percentage, which you will only have to bring to 100% if you are interested in recovering all the materials to upgrade the Smurfizer.

As already mentioned, you can also use the Smurfs weapon to fight against the enemies corrupted by Felleaf. Also in this case, the fights will all be quite simple and may require special combos, such as the need to jump on the head of an enemy or shoot it down before hitting it with the Smurfizer, but it will never be too complex. Everything will also be enjoyable in the company of a friend in local co-op, a possibility that unfortunately we have not had the opportunity to explore, so we do not know how to give you additional details about it. 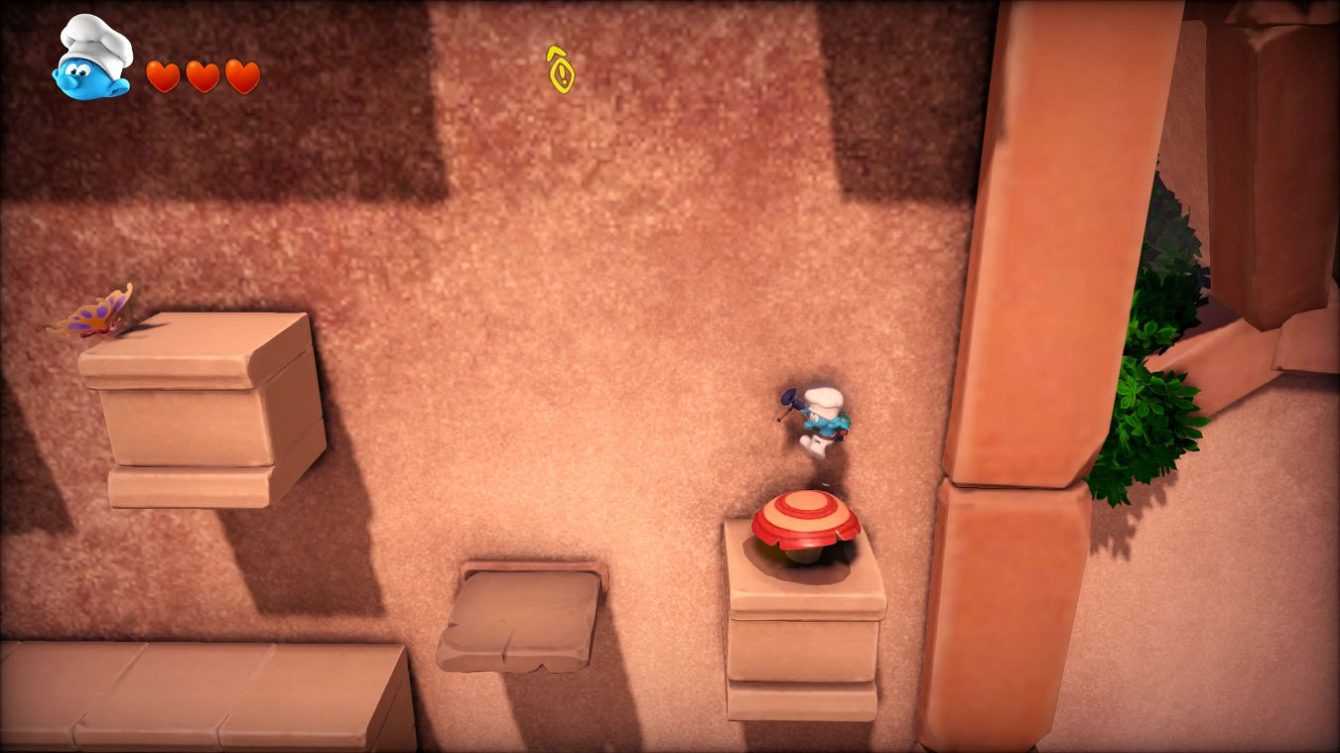 The Smurfs Game World – Fel Leaf Mission it is lively and colorful enough to make the various game sessions truly enjoyable to experience. The various game worlds are all very different and recognizable, as well as having peculiarities that make the gameplay a little more varied, although that feeling of repetition that we have already mentioned previously remains. Furthermore, the excessive simplicity of the level design and the lack of panache at the level of difficulty go very well with the inaccuracy of the commands, a bit excessive in some situations and for some puzzles that instead require a certain meticulousness.

A truly curated artistic direction is accompanied by one soundtrack created ad hoc to be perfectly in line with the goal of production. All the tracks that will be the background to your raids in the various maps will be more than catchy, and some will also tend to remain anchored in your head for hours after closing the software. 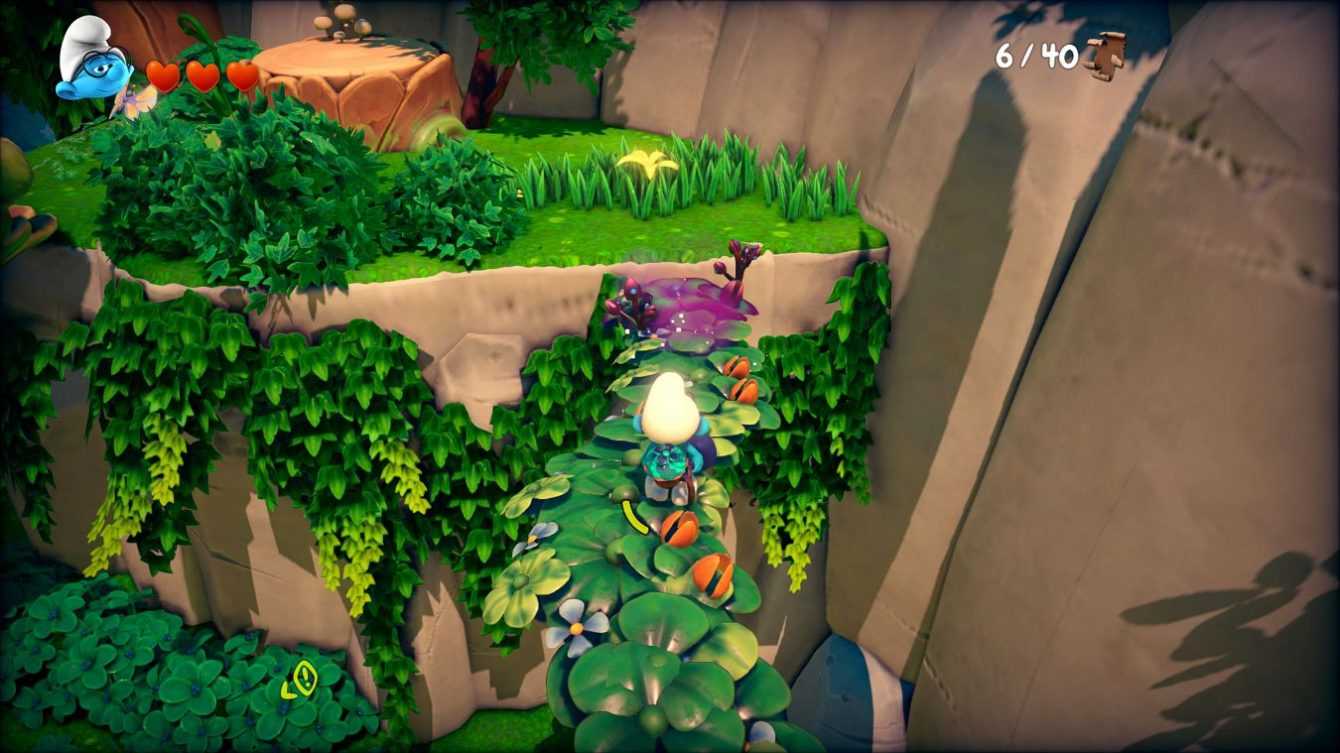 From a purely technical point of view, however, we noticed some flaws that we honestly did not expect from a title of this type. Our test of The Smurfs – Fel Leaf Mission, before writing this review, took place on a PlayStation 4 Pro, the most powerful hardware on the market if we exclude next-gen consoles (and of course the PC). We wasted time pointing out the obvious because, surprisingly, we found ourselves faced with all too frequent drops in frame rate, even in situations where there was not even the presence of Smurfette on the screen excitedly.

Nothing that can affect the enjoyment of the game for the youngest, mind you, but we were surprised by the lack of fluidity in certain situations for a title that is anything but heavy. Furthermore, considering that the title is also available on Nintendo Switch, we wonder how it could run at this point on the less performing hardware of the Nintendo hybrid. 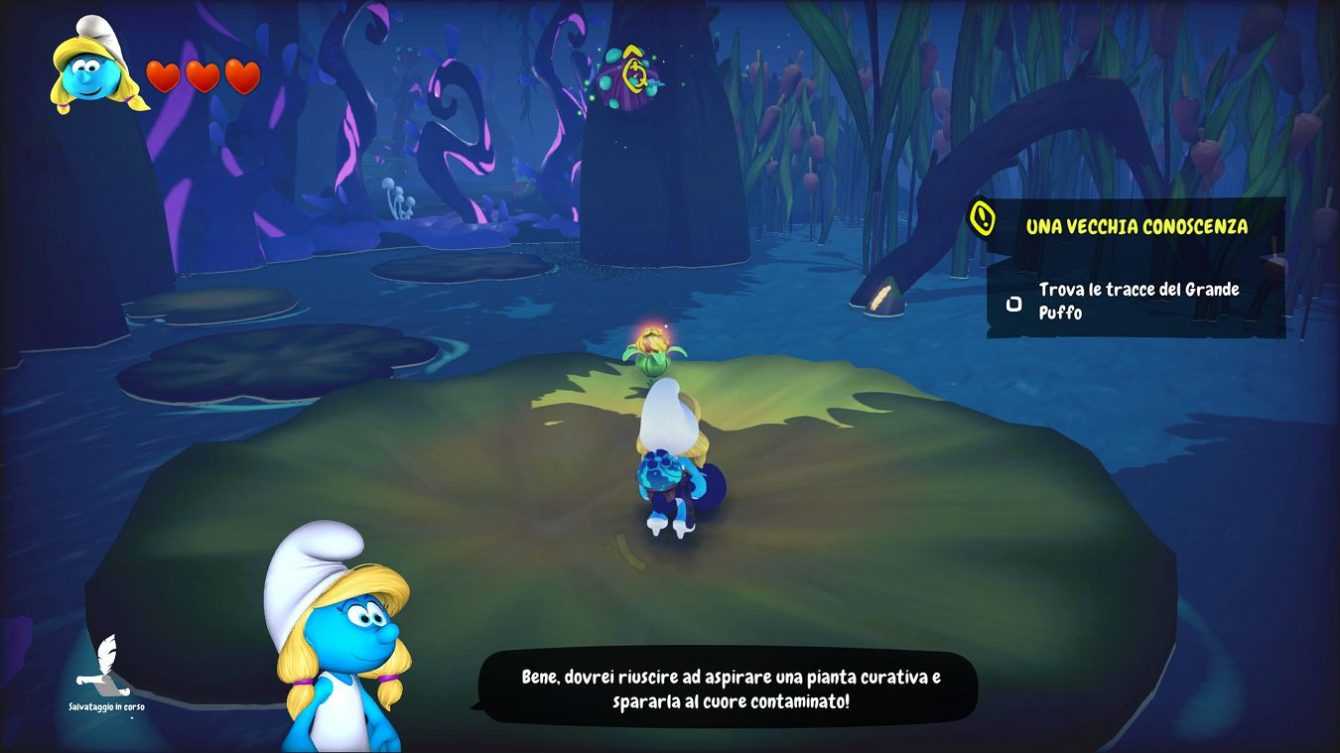 To conclude this review of The Smurfs – Felleaf Mission, we strangely find ourselves not having to exclusively recommend the title to a very young audience. This although it is true that the level of difficulty and complexity of the level design of the Microids game is calibrated downwards and that, net of everything, we find ourselves faced with a repetitive and not very varied game. There feeling of peace and tranquility, as well as the purity and vivacity of the artistic direction, will also lead the older ones to experiment a few hours in the company of the little blue men who have permeated the youth by now past.

We remind you that The Smurfs – Fel Leaf Mission is now available on PC, PS4, PS5, Xbox One, Xbox Series X | S and Nintendo Switch. Let us know what you think below in the comments, we will continue to keep you updated with all the news, guides and reviews on videogame and tech! And if you are interested in game keys at affordable prices, we recommend that you take a look at the InstantGaming catalog!