For science fiction and golf lovers, here is a sliding golf game that hides many ideas. Let’s find them all in this Wasteland Golf Club review

What are the characteristics that make a quality title? The technical sector? Duration? A huge map to explore or billions of experience points to collect? Wrong, what makes a video game interesting and innovative are the ideas. The characteristics mentioned above, if taken alone, mean nothing, but are valid only if subordinated to the originality of the ideas of game design. So if you are looking for a new game e stylistically original, continue reading ours review from Golf Club Wasteland.

Not just a simple golf game

Before starting the actual Wasteland Golf Club review, you need to provide some information about context. The title, developed by Demagog Studio and distributed by Untold Tales, it was born as a mobile game. Released in 2018 for iOS and Android, it is now proposed for all console of new and old generation. It is no coincidence that it was originally designed for mobile, the gameplay is in fact a lot basic, but we will return to this later. As already mentioned, Wasteland Golf Club is a real one concentrate of ideas.

The game indeed mixes the mechanics of a classic game of golf in 2D, in which you have to pocket a ball crossing a certain one area, with a very interesting background narrative and a visual style unique. The poetics that make Golf Club Wasteland unique in its genre lies precisely in how the history of the game world. That is through communication on several levels, diegetici ed extradiegetici, which highlight a dystopian science fiction of particular depth intellectual. 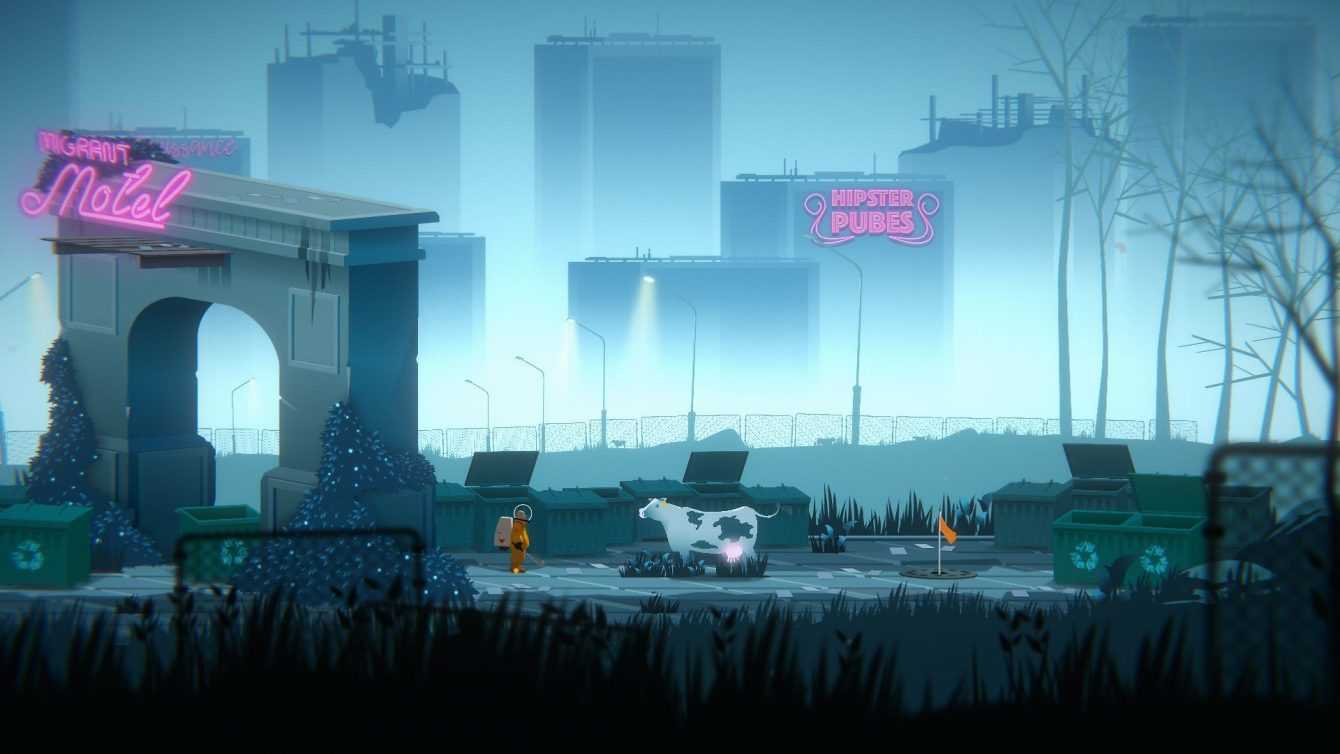 What’s a guy dressed in a astronaut playing golf in shopping malls decadenti, to parks and dilapidated buildings? To answer this question, as mentioned, we must look at the particular sector narrative of the game. The earth was devastated by a catastrophe Organic which resulted in the death of almost all individuals. I super rich of the earth have put all their energies to emigrate upon Mars. However, in the most populated city on the red planet, Tesla City, however, life is no longer what it once was. One day Charlie, former pilot of the Mars mission, he is fed up with this new life and decides to make one madness.

Stealing a spaceship caddy from one of the major interplanetary golf centers, Charlie decides to take a long and dangerous journey to return to earth and say goodbye to the late planet by playing a last game to golf. But it does not end here, in fact, hole after hole our hero realizes that he is not completely alone. But of this presence we will not speak for not spoil you the rest of the game. The planet has remained inhospitable to the vita human after ecological catastrophe, which is why we will wear a suit and helmet throughout the adventure. 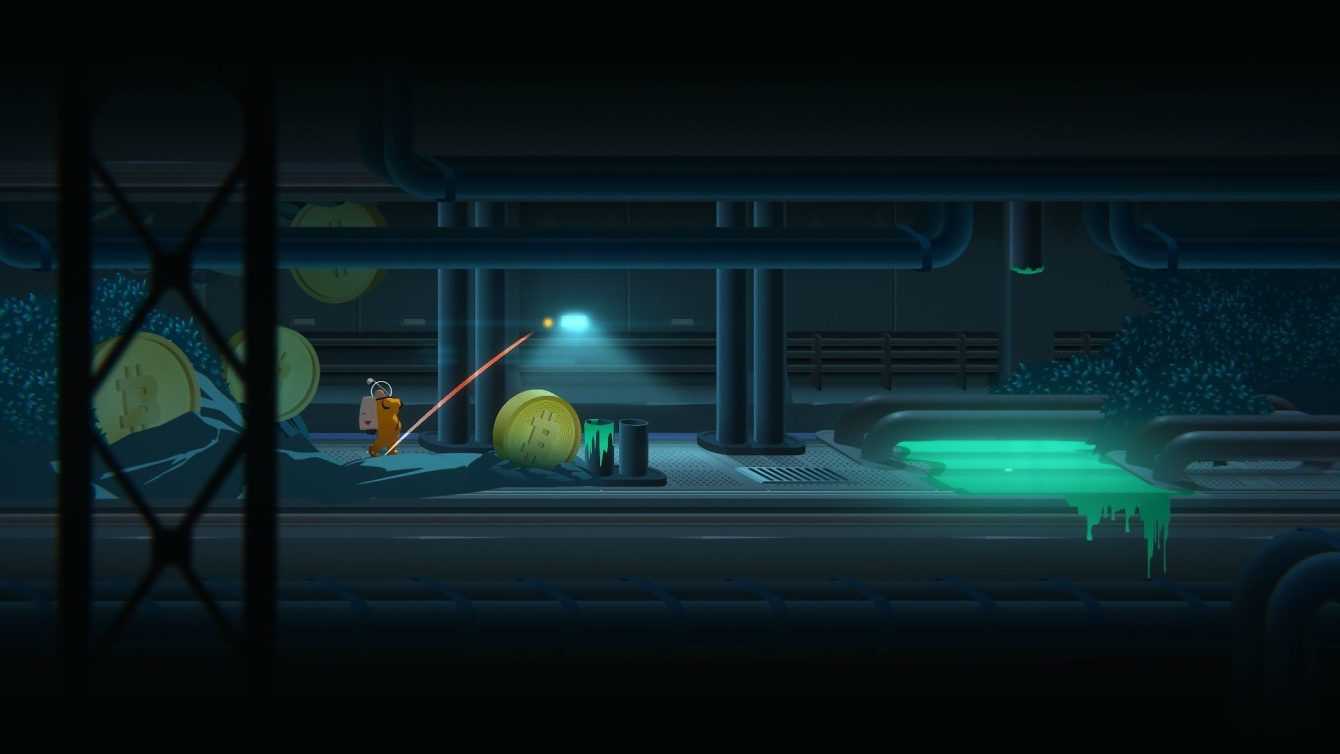 As soon as we land on planet earth, we will have to face a simple one tutorial represented by the first level. Despite, as already mentioned, the mechanical of game are enough basic, what makes the title fun to play is given by the well-kept level design. Although the number of levels is not that high, we are talking about a total of 34 beech effective, each of them presents challenges and obstacles different. With a good progression of difficulty (some are really tough), each level pushes the player to reflect on which is the best path and on which ones shortcuts take, in case of course there are any.

One of the points weak unfortunately it is in the core gameplay, or in the launch of the ball. The player, through the inclination analogue of the pad, decides how much power to give and which trajectory to let the ball perform. Here unfortunately, it happens very often that the game does not make it clear how much power to give. This results in shots that are too short, or too long as the case may be, and the more advanced levels become very soon frustrating. The game modes are three, depending on how you want to play the game. From the mode history we move on to challenge, where to move forward it is necessary not to exceed par, to finish atiron mode where no errors are allowed. 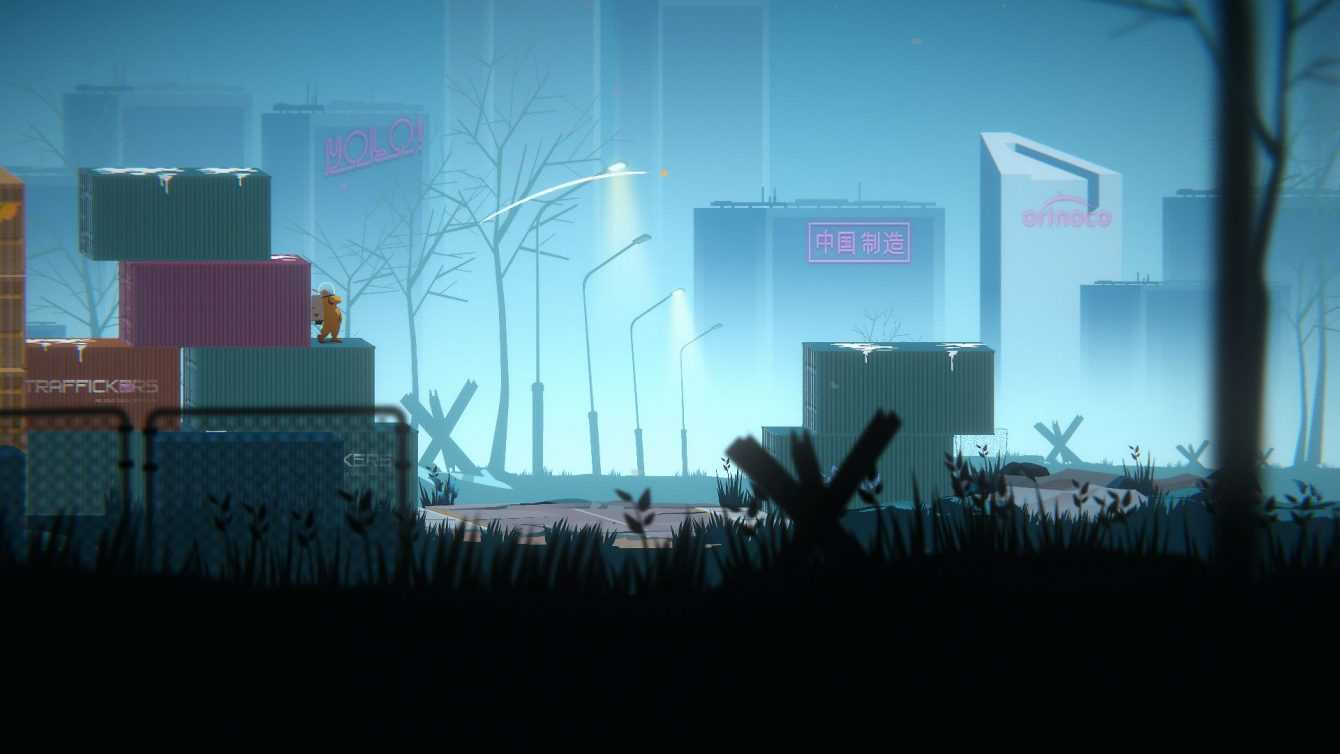 Golf Club Wasteland it’s not just the story of an astronaut returning to earth battered to play his last game. It is above all the construction of a message precise, of a broader narrative, or rather of a universe narrative. By playing, it is possible to get in touch with an entire ecosystem of signs, stories, characters that make the world feel alive and exciting. The diary in the main menu, as well as telling the story verbatim from another point of vista, that of the mysterious presence fills us with parallels and citations of works literary and pictorial.

Dall’Odyssey a Cormac McCarthy, the game (the developers) puts in analog relationship Charlie with the Hiker on the sea of ​​fog by Friedrich. Like the Wanderer, our Charlie also stands up powerless in his protective suit in front of landscapes radioactive with broken neon signs. As a kind of neo romanticism. In addition to the Diary, in the course of the game we will be accompanied by a radio that, in the way diegetico, it will make us feel more comfortable with beautiful and different music stories on the pre-catastrophe world. 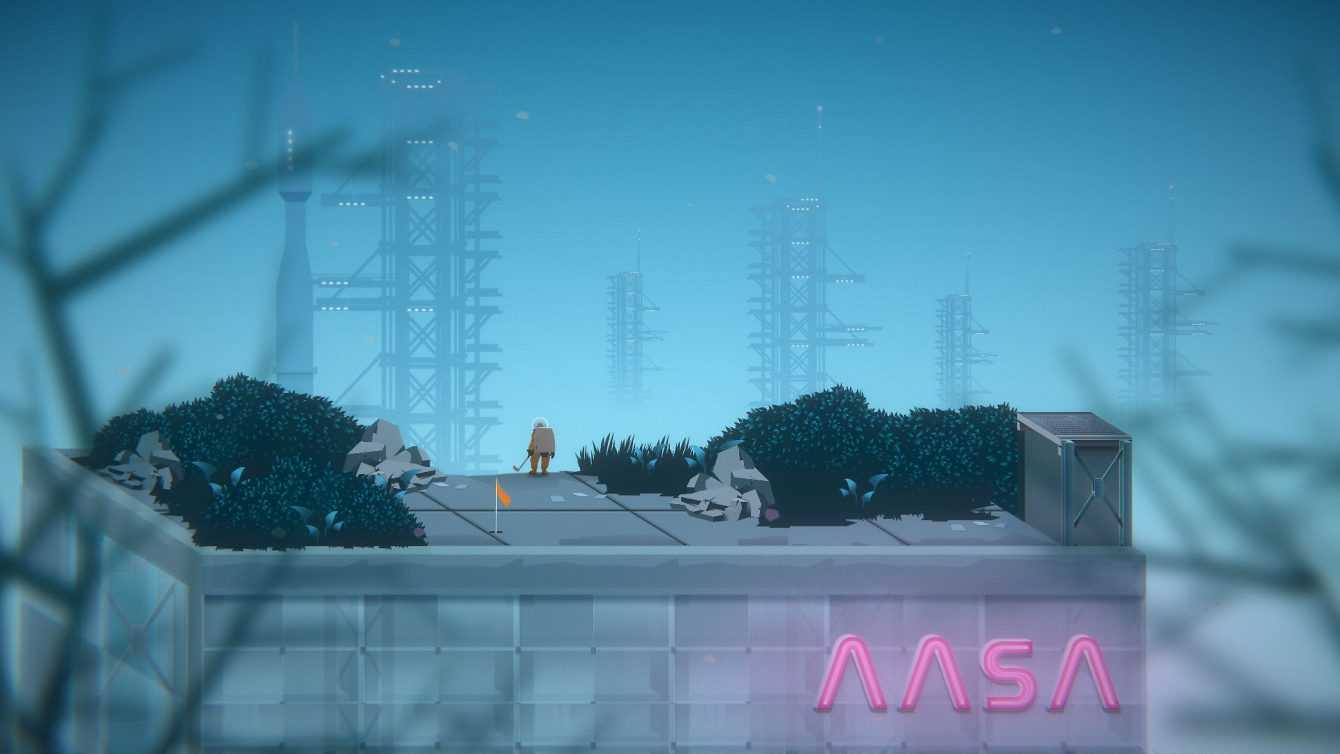 This is one of the most striking elements of the title. The people of different nationalities involved in this species of podcast, they almost make us step into their lives and savor a lost land with personal anecdotes thoughtful and nostalgic. Interesting that each person calls to mind memories which manifest themselves in sounds, smells, moods: “Every country had a smell, Mars didn’t”. To return to the game, at the end of the 34 holes a cartoon which will illustrate Charlie’s story from start to finish. The dates will be here answers to many questions about his past and his future.

Hole after hole, we will realize the treatment placed in the scenarios. These are all made with style minimal, including the character. The faded hue celeste of the backgrounds and the grays of the buildings are interrupted by hyper saturated pink neon signs, often bearing irreverent names. In the course of the game we will pass through deserted parks, popular buildings in forfeiture and interrupted highways. Style brutalist of the architecture in the background contrasts with the poverty of what happens in the foreground; garbage, radioactive animals and a great sense of desolation invade the streets of Alphaville. The only drawback, returning to the gameplay, is perhaps on some occasions where some element in the foreground dark the view of the ball.

Applause for the sector audio, together with the radio stories, we will be accompanied along our adventure by several songs. Without exaggerating we can say that the game’s soundtrack is wonderful and does not fear comparisons with AAA titles (the wonderful song “Two Astronauts”). The music helps to create an environment relaxing and at the same time vibrant. Somehow they “fill” the void and the silences of a post apocalyptic earth. The songs edited by Shane Berry they mix sinthwave sounds, pop interludes when not explicitly techno. Nostalgia Radio it is in this, a great metaphor of nostalgia for the earth by the humans who live on Mars. These in fact, living in the 2030, continue to listen to the terrestrial music of the 2021. 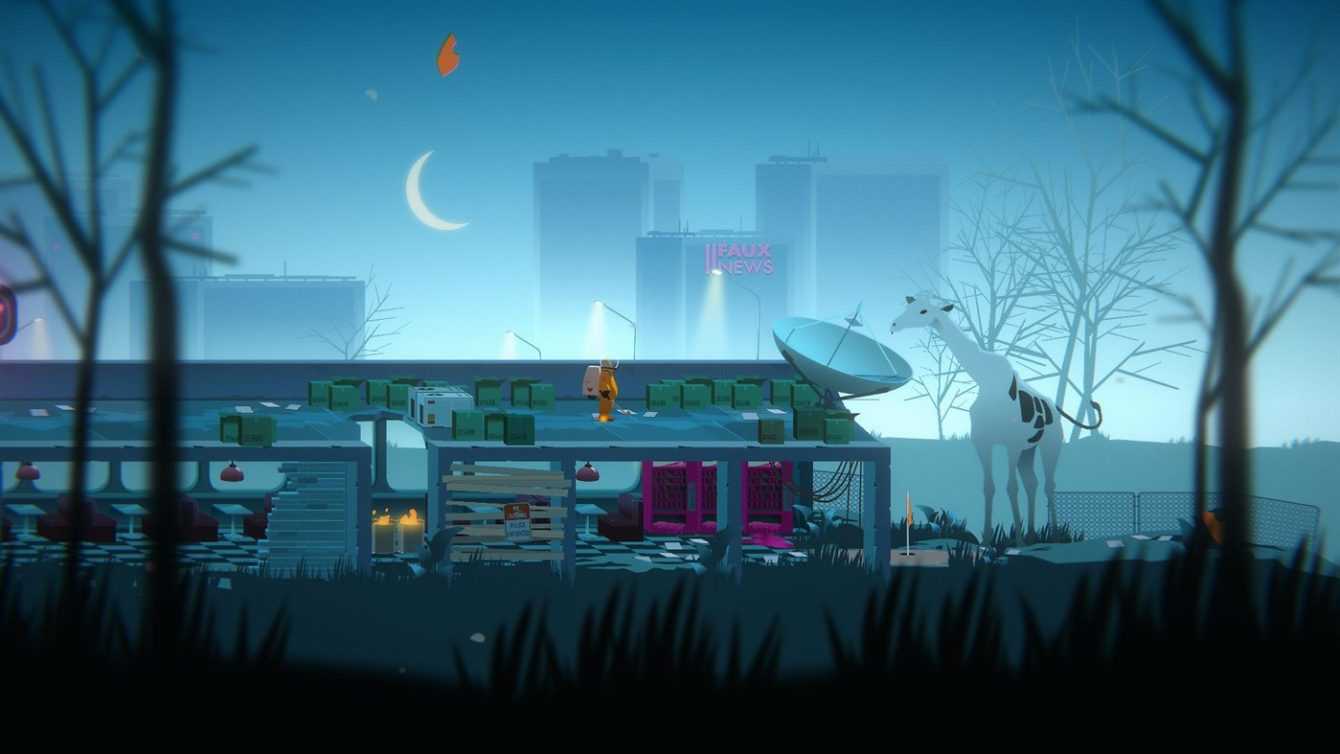 From the epochal to the anecdotal

Golf Club Wasteland it is a deception, under the guise of a trivial 2D platform golf game, there is a little one contemporary artwork. It is no coincidence that producers, i Demagog Studios, are first of all concept artists. Their approach, according to team members Igor Simić, Shane Berry e Stepko, can be summarized in Constellation Storytelling. The principles that guide this approach are an acute view of modern life, storytelling with interesting characters, world building and stories told through transmediality.

Summing up, in this review we cannot give the maximum of grades at Wasteland Golf Club just because it inherits all the limitations and gaps of an indie project. If in this particular context quantity and quality cannot be related, the title anyway does not exceed in the contents and often there is the feeling of wanting Moreover. Often gameplay also contributes negatively imprecise. To conclude, the title turned out to be an excellent one surprise for those who write and hopefully give the same vibe to anyone who approaches them.

To buy securities in Discount, go to our Instant Gaming link! For other reviews, news and insights, follow the pages of TechGameWorld.com.

A golf game that makes you think and excite