The WhatsApp App is adding yet another novelty to its messaging service. This time it’s about the ephemeral photographic messages, defined by the platform as “viewable only once”. And as the same definition provided by the App refers, these are photos and videos that can only be viewed once before disappearing permanently. A feature similar to the one already present in Snapchat, and which incorporates the best-known one of ephemeral messages launched on Instagram and Messenger.

The WhatsApp App introduces the ability to make photos and videos viewable only once. From now on, by taking a picture, users have the option to select the timer icon to choose the “view once” option. In this way it will be possible to send contents that disappear after being viewed, and that they will not be previewed in chats. And that, as ephemeral messages, they cannot even be downloaded. Precisely for this reason, Facebook is suggesting that the new feature be designed for “private moments” or for sending sensitive information, such as passwords. 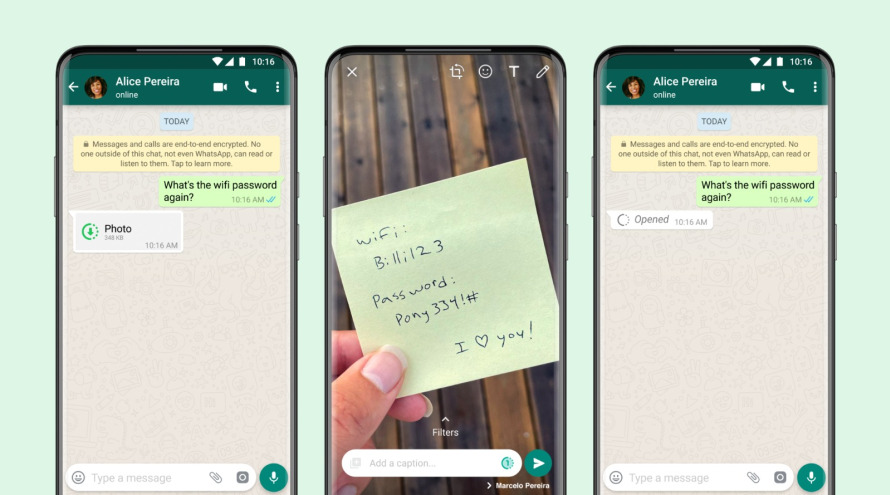 Clearly, it is not so certain that these messages are truly “private”. In an article posted on its official blog, Facebook notes that the recipient still can take a screenshot or record your screen while opening a “once viewable” photo. And, above all, unlike Snapchat, the WhatsApp App does not allow you to see when a screenshot of your messages is taken, which could be inconvenient. Furthermore, the company makes it known that the ephemeral photos reported by users will then be made visible within the application. Be careful what you send, then! It doesn’t seem like the service is all that private.