In this review, we will explore the “XP Pen Deco Pro MW” tablet without screen which, among the features, has Bluetooth v5.0 connectivity

XP Pen, the Japanese company producing graphic tablets, is no longer new on the pages of TechGameWorld.com. We have recently analyzed what is proposed as a tablet with a screen, with generous dimensions and a competitive price: the Artist 13.3 Pro model, of which you can find the review by clicking here.

In these days, with our collaborator who is passionate about animation and digital drawing, we have had the opportunity to test XP Pen Deco Pro MW: the tablet without a screen, but with a feature that could prove essential for an artist looking for comfort or often on the move, the Bluetooth v5.0 connection.

Let’s see all the details of XP Pen Deco Pro MW, in the course of this review! 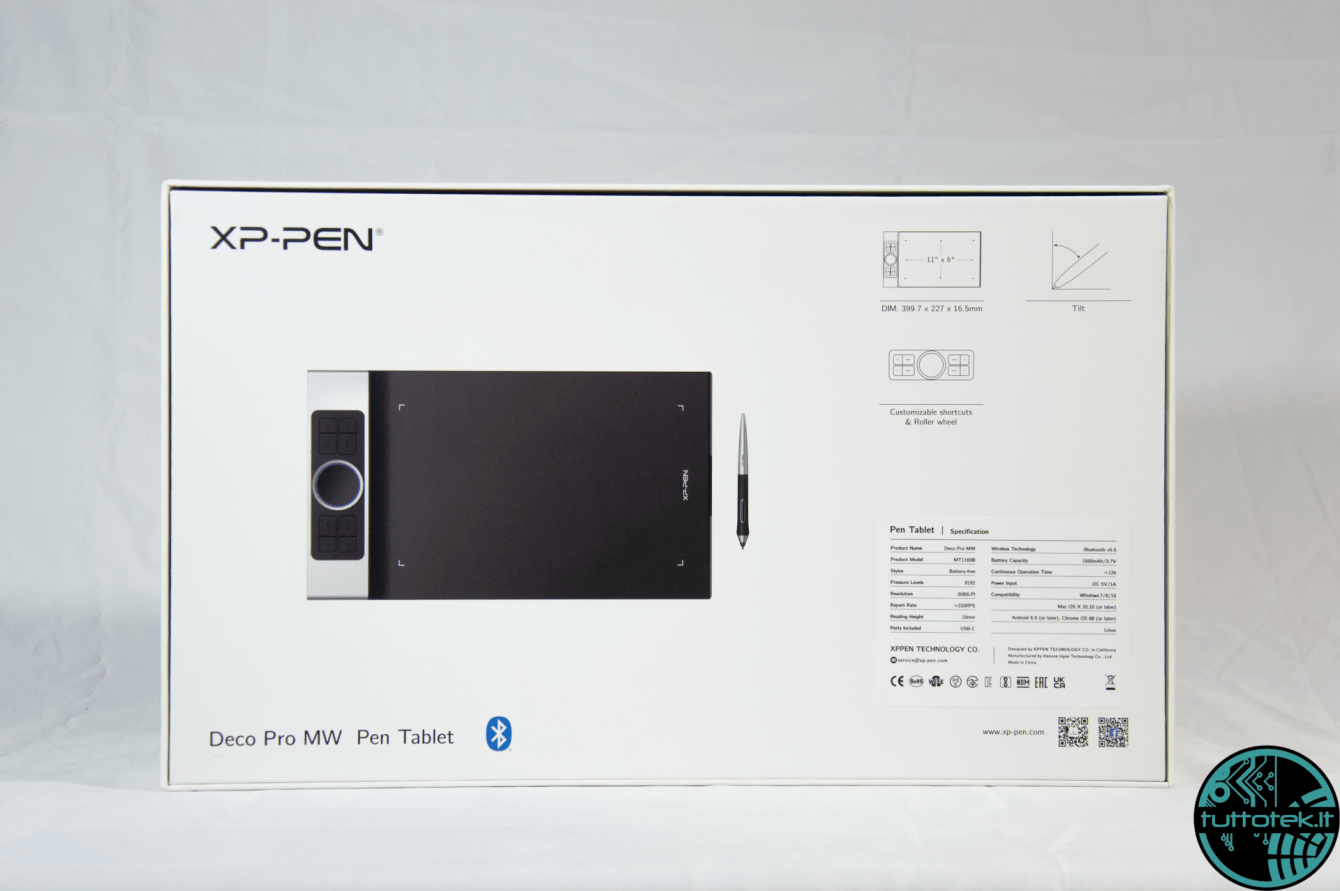 We don’t have much to say about the packaging. Following the style of Artist 13.3 Pro, once again we are faced with a pack minimal. In addition to an image of the tablet and its name, we will find the various specifications on the back and nothing more, except for the two small logos through which we can discover that it has been awarded the “Red Dot Design Award“In 2019 and with the”The Good Design Awards“In 2018.

Once the film has been removed, we can lift the cardboard lid. Below it will be the tablet in plain sight, covered with one plastic protection. Putting it aside for a moment, we will find the section dedicated to accessories. In addition to the stylus with its cover, which we will analyze later, we were surprised by the amount of cables and adapters with which this tablet is supplied. We have the Type-C cable both on one side and on the other and we have a second USB-A on one end and USB-C on the other. In addition, as if that were not enough, there is a adattatore da USB-C a micro-USB which anticipates the possibility of connecting the tablet to a smartphone or tablet.

In the boxes we find the various instruction booklets and the classic XP Pen black drawing glove. The cylindrical case containing the pen is also in total-black color. Being able to open it from both sides, one of these will be used to extract the stylus, while the other will contain well 10 spare leads it’s a Bluetooth receiver. The magnetic technology pen is truly elegant. Very similar to the version supplied with the “Artist“ series, this one is thinner and matches the colors of the tablet itself, being black and silver. Here too we will find the two classic mappable keys.

This tablet is available in two sizes as regards the model with the Bluetooth module: the SW version, more contained, and the MW version with a more generous surface. We have had the opportunity to test the latter. With a’height of 22.7cm, a width of 39.9cm is one 1.65cm thick this tablet has aactive area of ​​about 28 × 15.20cm.

And with two awards won thanks to its design, XP Pen Deco Pro MW is a truly refined tablet. Characterized by two colors already anticipated by the stylus, silver is joined by black. The drawing area is completely black, with the “guides” that delimit the active section in white color, which light up when we bring the stylus closer to the surface. On the other side we find the section dedicated to keys, consisting of a aluminum frame it’s a part in opaque plastic containing the eight keys and the double ring. The latter has a physically rotatable part (also in aluminum), while the black center is touch. Between the two sections there is a circular led, really hit the spot!

The back is entirely in aluminum and makes this tablet visibly robust and really light (only 858g). With a satin finish (similar to that of the MacBook in Silver color) the sensations that are felt using it do not absolutely lead back to a cheap product. The entire posterior surface is interrupted by two large rubber bands, which allow the tablet not to slip in the various work sessions.

The build quality really surprised us. We couldn’t find any flaws in her. Aesthetics, then, bewitched us and, by placing it next to the MacBook Pro, our desk has become a feast for the eyes.

As with the previous review, here too we took advantage of the experience gained in the artistic field of our collaborator Nicolò. After trying this XP Pen Deco Pro MW lunge he stated:

As I have already specified in the review of the XP Pen Artist 13.3 Pro, I have been drawing digitally for 7 years now and my first graphics tablet was a tablet without a display, the Wacom Bamboo One. Over time, thanks to a couple of university colleagues, I was able to try others, such as the One By Wacom and the Intuos S: two tablets that are really not bad, with a minimal design but with excellent technical quality, especially for those who are interface for the first time in the world of digital illustration or graphics in general.

When I learned that we were going to review this XP Pen Deco Pro MW which has no screen, I put my hands through what little hair I have left. This is because I asked myself “what could there ever be to say about a graphics tablet without a display?”. Well, I actually hadn’t come to terms with the surprises XP Pen has in store for us.

The thing that immediately catches the eye is the size of the product which is almost as big as the Artist 13.3 Pro, but much thinner. On the left side of the tablet, we have 8 shortcut keys and a wheel cursor, on which a small trackpad is placed. The LED that changes color according to the status of the tablet is really nice: red for connection via cable (and to indicate that the battery is low or charging), blue for connection via Bluetooth and purple for both connections at the same time. On the left edge, we then have the entrance for the power cable and we are supplied with a Type-C / microUSB adapter to connect our Deco Pro to the smartphone.

Very fine black and silver coloring. Obviously this tablet could only be accompanied by the trusty pen, without which we could not carry out our works. The latter, exactly like that of the Artist 13.3 Pro, is light and handy and does not have a battery, so it does not need to be recharged in order to function.

But let’s move on to the technical side. This Deco Pro MW has the ability to be connected to our computer via Bluetooth as well. At first I was not very convinced of this choice by the Japanese company, because I was afraid that it would compromise my work experience due to any delays, input-lag or actual battery life. I’m glad I was wrong. The total absence of latency surprised me a lot. As for the battery, XP Pen claims it should last a dozen hours. Testing it “intermittently” (by turning it off and on again), we found that 11: 30/12 hours are actually reached easily.

In case we do not have a computer with a Bluetooth connection, the dongle in the package of our pen will allow us to connect our tablet. As I said before, we are also provided with a micro-USB adapter to be able to use our Deco Pro MW on the smartphone. What can I say, it’s not really comfortable. First of all, we encountered several compatibility problems on various smartphones and, moreover, in some cases the cursor was popping up while in others not.

In my opinion, the fact of being able to connect the graphics tablet to the smartphone, yes, is a nice idea, but a little useless because, in addition to the fact that it will never offer us all the advantages that a computer offers us, it is very inconvenient to use. The positive side is that, in case you spend a lot of time on the train, bus and so on and so forth, it could be suitable as a “pastime”. 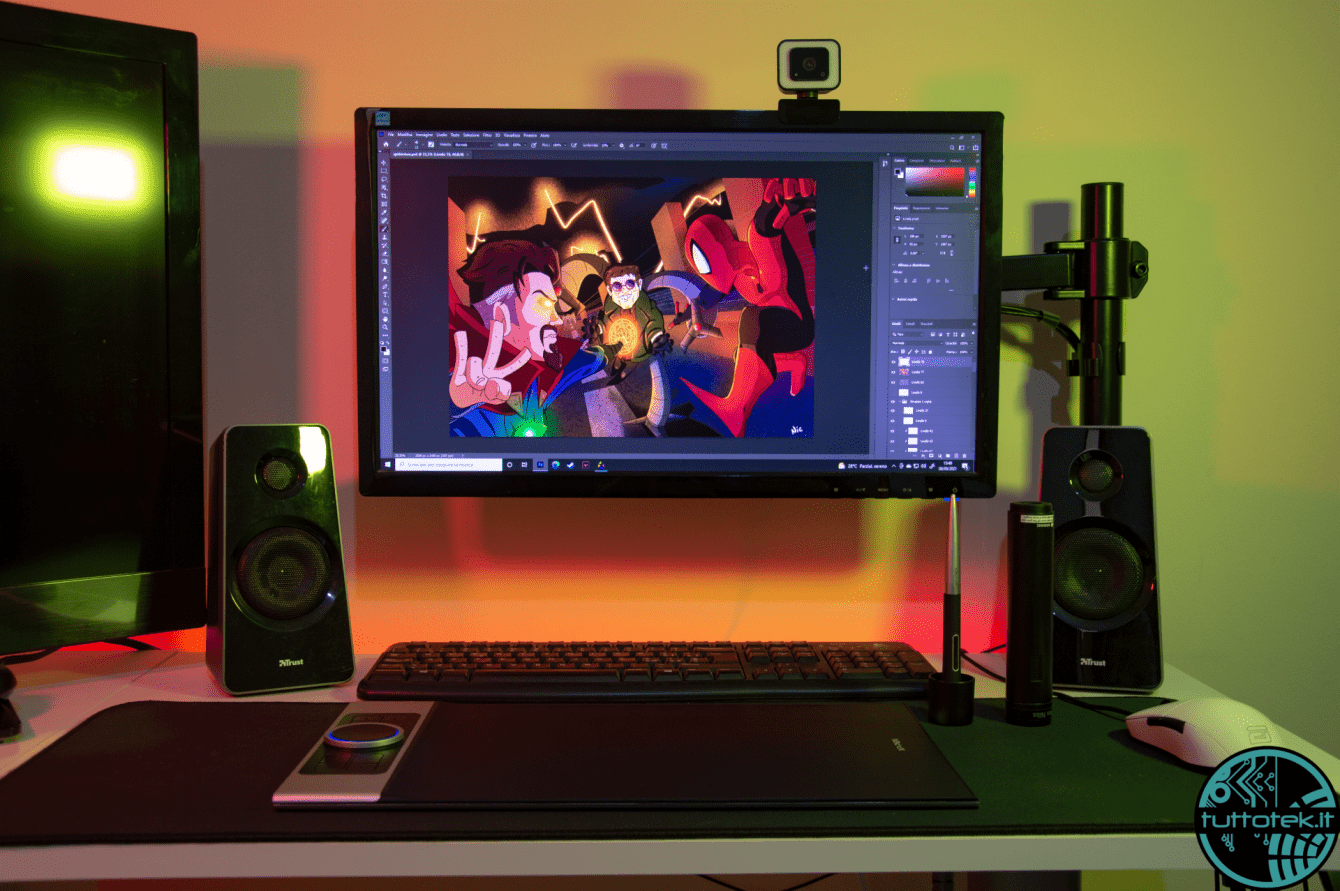 We talked a little bit about everything, but after all: what is it like to draw with this XP PEN Deco Pro MW? As in the Artist 13.3 Pro, we have 8,912 levels of pressure, eight fully mappable shortcut keys, a wheel cursor (also customizable) and a mini trackpad above it. The latter is nice, but in the end I haven’t used it a lot because I’m used to using the one from my laptop.

Drawing with this tablet is truly rewarding. Everything, then, improves once we use it wirelessly because, in addition to not having cables in the way on the desk, we will be able to move it freely and it will be free of input-lag. Based on my experience in the use of graphic tablets, I would recommend this product to everyone, but especially to those who have never had a device of this type, and are still at the beginning of their “artistic” path. This is because being able to practice on a device that offers so much quality and versatility at a consistent price will greatly facilitate learning!

That said, thank you allotek and XP Pen for giving me the chance to try and talk about their products again. I leave you with this illustration dedicated to “Spider Man: No Way Home”, made with the XP Pen Deco Pro MW. Hope you like it, bye! 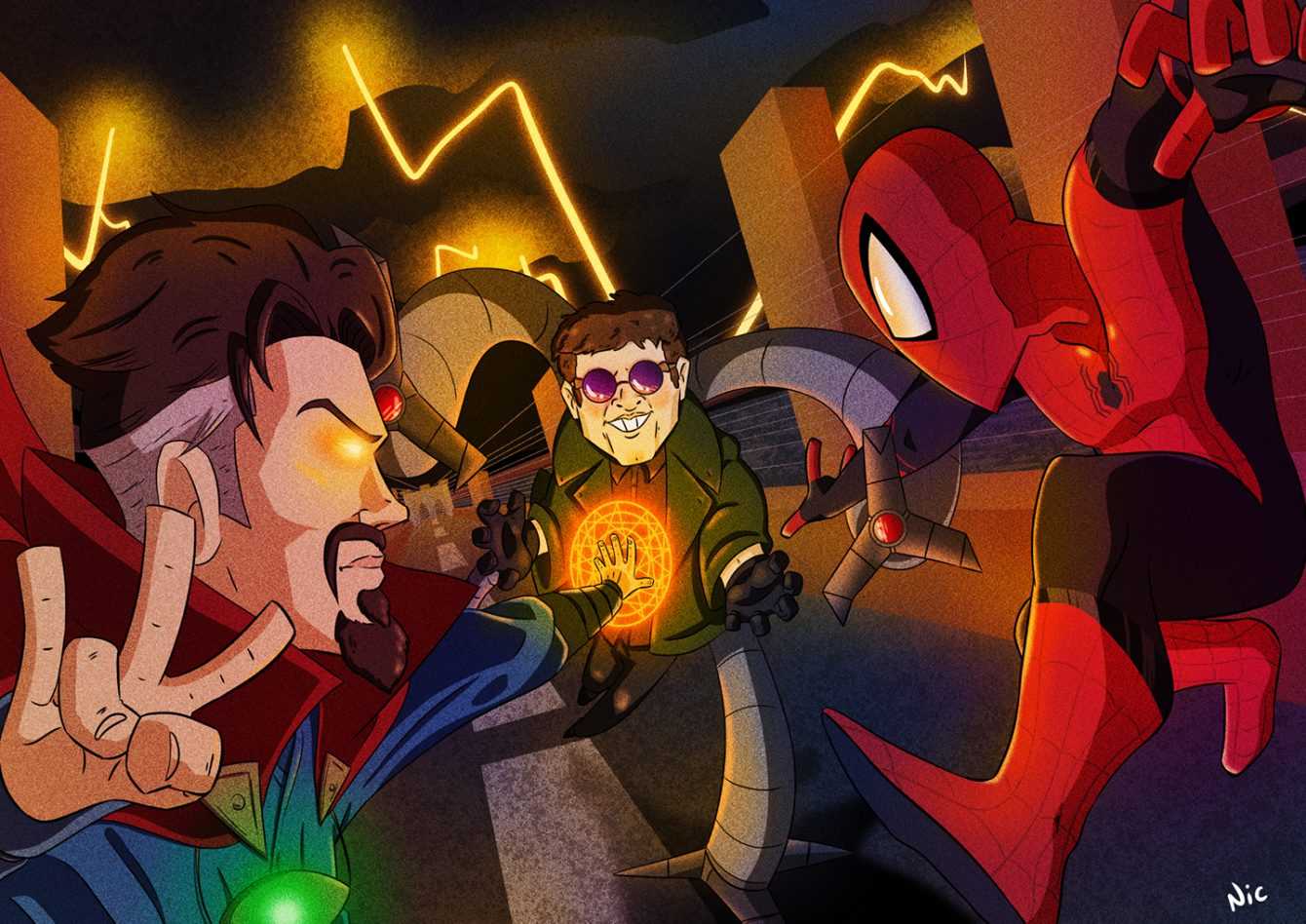 XP Pen Deco Pro MW is a full screenless graphics tablet. Whether you are new to digital drawing, or are used to using this type of peripheral without a display, the tablet in question is absolutely suitable for your purpose.

The possibility of using it in dual mode, connected through the cable or wirelessly, is the real pro of this model. Not only is this aspect beneficial in terms of convenience, but using it wirelessly we will not incur any downside.

Beko RCNA406E60LZXRN and RCNE560E61ZXN: the solar cycle in the fridge 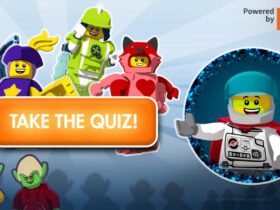 LEGO and DQ Institute together for Safer Internet Day

UGREEN 6-in-1 USB-C Hub Review: Expand the capabilities of your PC