The transition from Google Play Music to YouTube Music was anything but smooth. Yet it turned out to be incredibly profitable. Lyor Cohen, Google’s Global Head of Music for YouTube, recently said the service boasts well 50 million subscribers among the various options. A number that includes subscribers to YouTube Premium – the service that allows you to view and download content without advertising -, e YouTube Music Premium, in addition to the users who are currently trying the services. This means that it is true that the service has reached 50 million subscribers, but we don’t really know how many of those we are using the music features.

These days Lyor Cohen claimed that YouTube Music is the service of fastest growing music subscription at the moment, citing a Midia Research report as evidence. In that same report, Google claims 8% of the world market share of just under half a billion subscribers, with Spotify, Apple, Amazon and Tencent leading the rankings. For its part, Google is ahead of Netease, Deezer, Yandex and Pandora. But it must also be considered that the combination of very small sites earns 9% of the market share, thus putting itself in front of the technological giant. 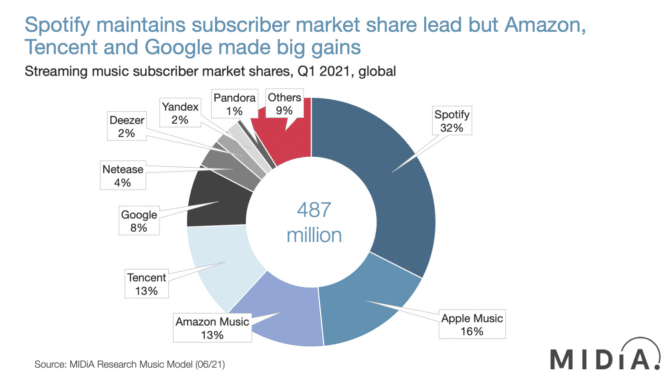 At this point it is worth pointing out that YouTube Premium and YouTube Music Premium are available in over 90 countries, which well explains the rapid growth shown by subscription services. Incidentally, the report demonstrates how Google is gaining share in crucial markets. And above all it reveals that the Generation Z subscribers have been growing quite a bit in recent months. In short, success is undeniable. Now we only have to understand if it will also be lasting and constant over time.