Among us is an imposter with a lot of money to burn: the crewmate-shaped fried chicken from Among Us reaches zany figures

You understand that you are facing a news-free day when it is the enthusiastic culture of Among Us to cause a sensation, for del crewmate-shaped fried chicken sold at astronomical prices on eBay. We allude to McDonald’s chicken nuggets, which instead of 99 cents so it was auctioned on May 28th on eBay have reached figures… let’s say a little different. After two days of flat calm, in fact, things soon reached five-character numbers, and the escalation certainly did not end there.

When the impostor is suspicious, he teases us: Among Us crewmate’s fried chicken

It would almost make you laugh, so called, but that is for the BTS themed menu (yes, the Korean band) or the shape of the fried chicken identical to the silhouette of the Among Us crewmates, one of the first offers moved the threshold from 99 cents to 14,869. We are talking about a figure that for us is in any case about twelve thousand euros, and that ended with a happy ending for the seller, as you see below. 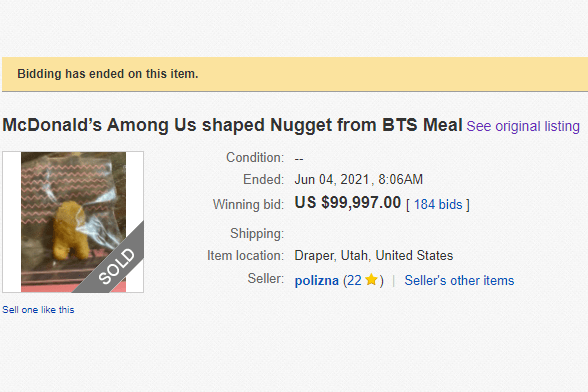 The figure is close to one hundred thousand bucks, or to be more meticulous we are talking about 99,997 dollars. For a similar figure, with which we could definitely close some mortgages, the minimum is that the nugget is at least edible. The retailer has taken care to freeze the fried chicken and put it under vacuum, for a delivery “within the expiration date” that does not go beyond two weeks anyway. At this point one wonders, given this slice of “internet nonsense”, is the Szechuan sauce popularized by Rick & Morty also planned? The answer is yes, “at the request of the buyer”. Crazy stuff.

Now it’s up to you to tell us yours: what do you think of this waste of money? Let us know below, and as always don’t forget to stay on TechGameWorld.com for all the most important news for gamers and more. For your purely gaming needs, you can instead find the best discounts in digital format on Instant Gaming.