In the prestigious setting of the Monterey Car Week, in California, we often see the launch of dream cars making their world debut in the States. And this is precisely the case with the new one Aston Martin Valkyrie Spider, the open version of the extreme Valkyrie coupe. Equipped with the same aspirated V12 with 1160 hp hybrid system and Formula 1 aerodynamics, the spider version of the British super sports car promises to offer the same performance as the covered version, only with the wind in your hair. And what performance are we talking about? Let’s find out together.

What is Aston Martin Valkyrie?

For those who have not yet encountered this incredible car, a small step back is necessary to get to know the starting Aston Martin Valkyrie better. This is the most extreme and powerful car ever produced by the legendary Gaydon House, which for a moment detaches itself from the production of Gran Turismo and “educated” sports cars to embrace a new philosophy: that of speed.

The genesis of the Valkyrie derives directly from the world of Formula 1, an environment in which Aston Martin was little more than an extra in 1959 and 1960 and to which he returned in 2018 as title sponsor of Team Red Bull. While not contributing to the creation of the single-seater, Aston Martin with this “soft” return has begun to cherish the idea of ​​entering the world of Formula 1 full time, a return that has materialized this year with the birth of the Aston Martin F1. Team.

The agreement between Aston and Red Bull, however, is fundamental for the genesis of Valkyrie, which is due to a legendary character from the world of Formula 1, the engineer Adrian Newey. For those who do not follow F1 assiduously (which I strongly recommend you do), Newey is one of the most successful designers in the history of this sport: he is the architect of the successes of Williams in the early 90s, of McLaren between the 90s and 00s and, for the past 15 years, he has been the technical manager of Red Bull. For this reason, when Red Bull and Aston Martin found themselves working together, the idea of give Adrian Newey the opportunity to create a racing car extreme and inspired by the technologies used in Formula 1, it was too greedy not to be exploited. The initial name of the project, before Valkyrie, was in fact AM-RB 001, Aston Martin-Red Bull.

As mentioned, however, Aston Martin and Red Bull ended their relationship in 2020. They did not, however, close the Valkyrie project, which was pursued with determination by Gaydon’s men.. With the acquisition of the brand by Canadian billionaire Lawrence Stroll, owner of the Racing Point team, the Valkyrie project once again had the support of a Formula 1 team, which in 2021 became the Aston Martin F1 Team. The aerodynamic project was therefore conceived and built by Newey, and then completed and finalized by the men of Aston Martin, faithful to the original project.

Valkyrie’s three highlights: the Cosworth engine, the aerodynamics and the “F1” structure

And what project is it about? Simple, of one of the most extreme road cars ever created. There are three real highlights of this car, net of the price of over 2.8 million euros: the engine, aerodynamics and chassis and suspension, which bring never-before-seen innovations to road cars. Let’s start with motor, which for hard and pure motor enthusiasts is a daydream. Unlike the conceptually similar Mercedes One, Aston Martin Valkyrie does not use a V6 engine derived from Formula 1. 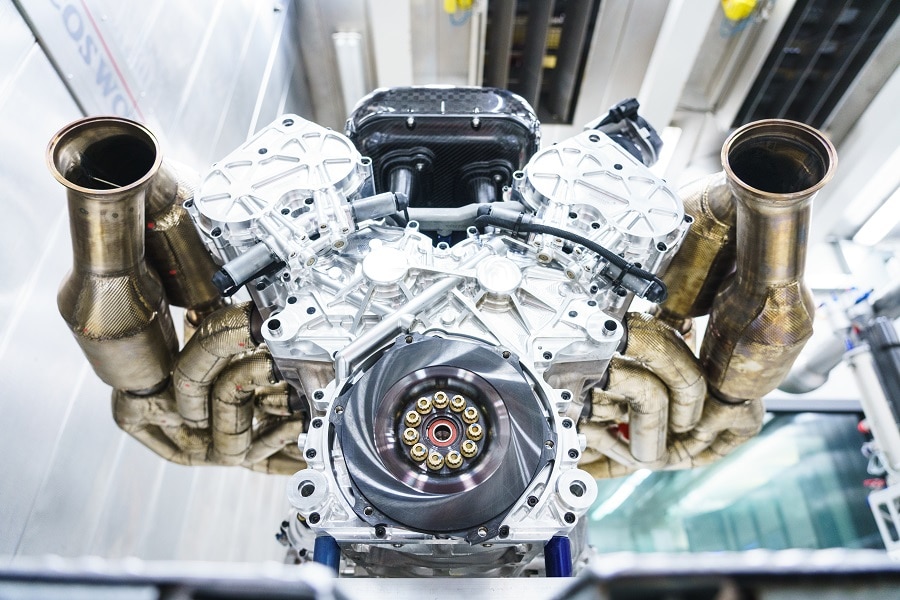 Under its narrow hood, in fact, there is a jewel, a 6.5 liter naturally aspirated V12 made by Cosworth. An engine that already excites you in this way, but that has a lot to tell. Made entirely of aluminum, it is incredibly light and amazingly powerful: by itself, it delivers 1,000 hp, and reaches up to 11,100 rpm. Yes, you read that correctly: eleven thousand one hundred rounds. Below you can find the bench test of this engine, to fully appreciate its sound: good listening.

This V12 is not alone though. Between the engine and the gearbox, a 7-speed sequential automatic made by the specialist Ricardo, there is a 160 HP electric motor developed by Rimac. Together, the two engines deliver 1,160 hp at 10,500 rpm, and 900 Nm at 6,000 rpm. The performances have not been formalized, but a 0-100 km / h of less than 2.5 seconds is expected, and a maximum speed of over 360 km / h. But it’s not just the engine that makes Aston Martin Valkyrie incredible. Its real ace in the hole is in fact aerodynamics. The focus of the entire project was in fact aerodynamic efficiency and flow management. The lines of Valkyrie in fact do not make it look like any Aston Martin, nor any other road car. From every angle, it looks like a racing car with license plates. 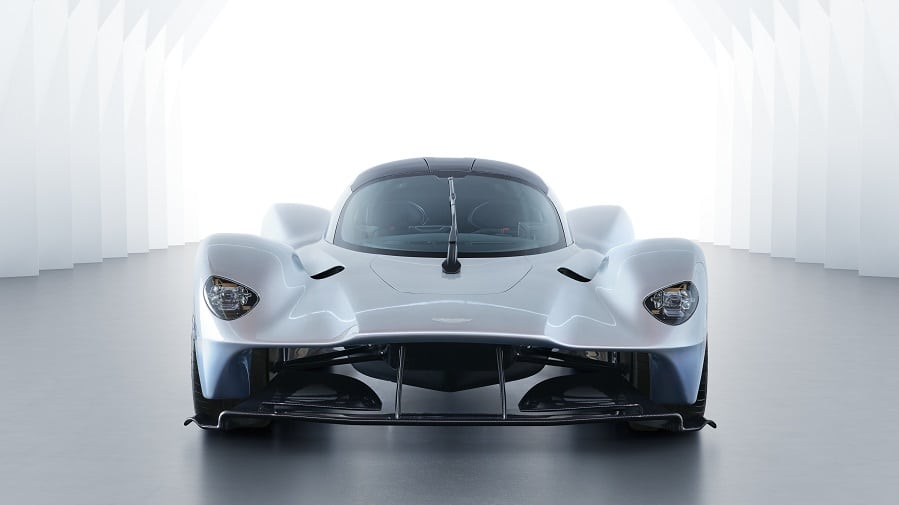 Low, very wide, with an English green bodywork that hides most of the innovations found under the carbon fiber panels. The very low front actually hides a real front wing, with the two central pillars similar to those of a Formula 1. Further back, then, we have a huge tunnel that leads from the front of the car to the hollowed side bellies, to take advantage of the fundamental Venturi effect that crushes the car to the ground. In this area then two other elements are discovered directly taken from Formula 1. Suspensions, for example, are pushrod on all four cornersi, like a single-seater, and we have on the sides i bargeboard and the flat bottom just like the cars of Sebastian Vettel and Lance Stroll. 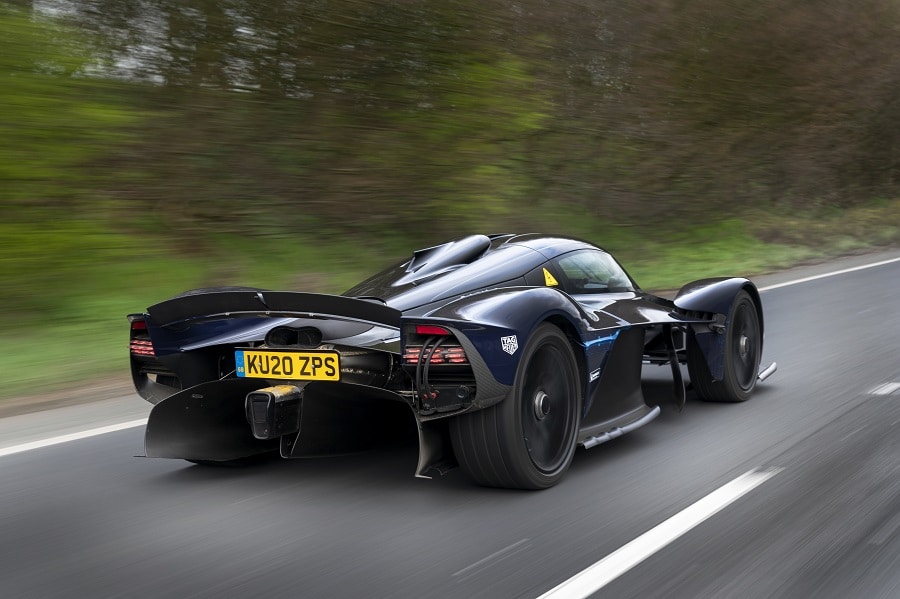 The passenger compartment is small and narrow and with a teardrop shape, extremely functional for aerodynamic flows. Behind then, the engine is a load-bearing part of the frame, and we find a huge rear diffuser. This speaker is double the size of Formula 1 cars. Because? Unlike the single-seaters of the World Championship, in fact, there are no regulatory restrictions here. And then, Aston Martin was able to create a truly gigantic loudspeaker, the secret dream of every designer on an F1 team. Think that an adult can lie down comfortably in the Venturi duct provided for the air. This huge diffuser together with the exhausts blowing on the small but tough rear wing guarantee one downforce of up to 1,800 kg, almost double the weight of the car (about 1,000 kg).

And Aston Martin Valkyrie Spider? Loses the roof, but not the vice

After having told you all the peculiarities of the incredible Valkyrie, let’s try to understand what the new Aston Martin Valkyrie Spider adds to this recipe. Its birth comes a bit of a surprise, considering the super-extreme typology of the coupe. At Aston Martin however they wanted to make the Valkyrie driving experience even more incredible by allowing the driver to enjoy even more the sound of the V12 at 11,100 rpm. 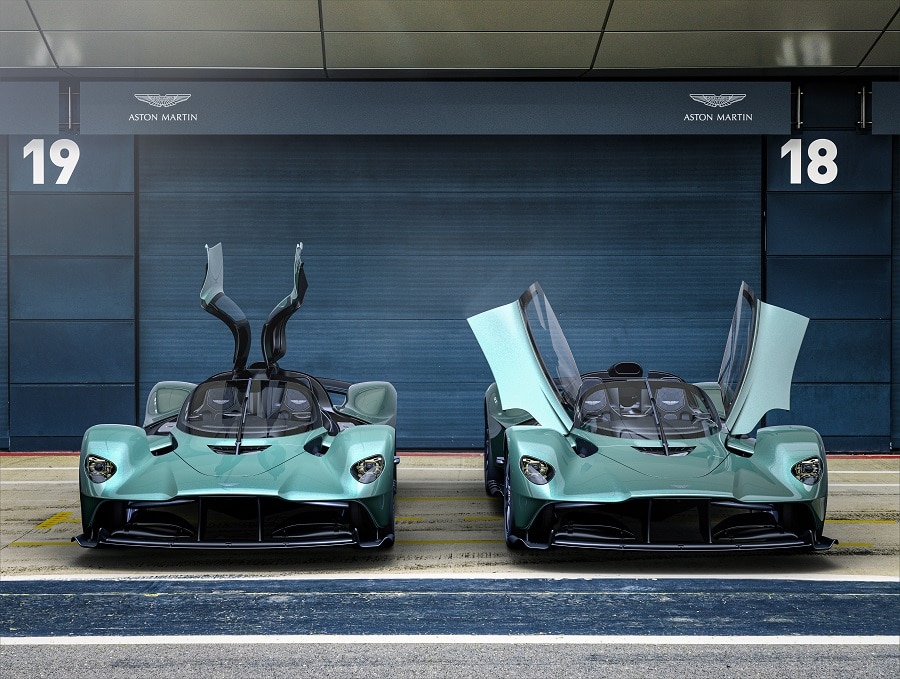 From a mechanical point of view, the differences with the traditional Valkyrie are very few. The highly sophisticated aerodynamics are almost intact, especially in the lower part of the car. The engine and its power are also unchanged, as are the interior. These are the blaze of function over form, a style not quite like Aston Martin. In fact, there are no precious materials or super-technological solutions, but there is only everything you need. The steering wheel, which recalls in shape that of the F1 single-seaters, it incorporates all the main functions and the multifunction screen with the beautiful view of the rev counter, with full scale at 12,000 rpm. 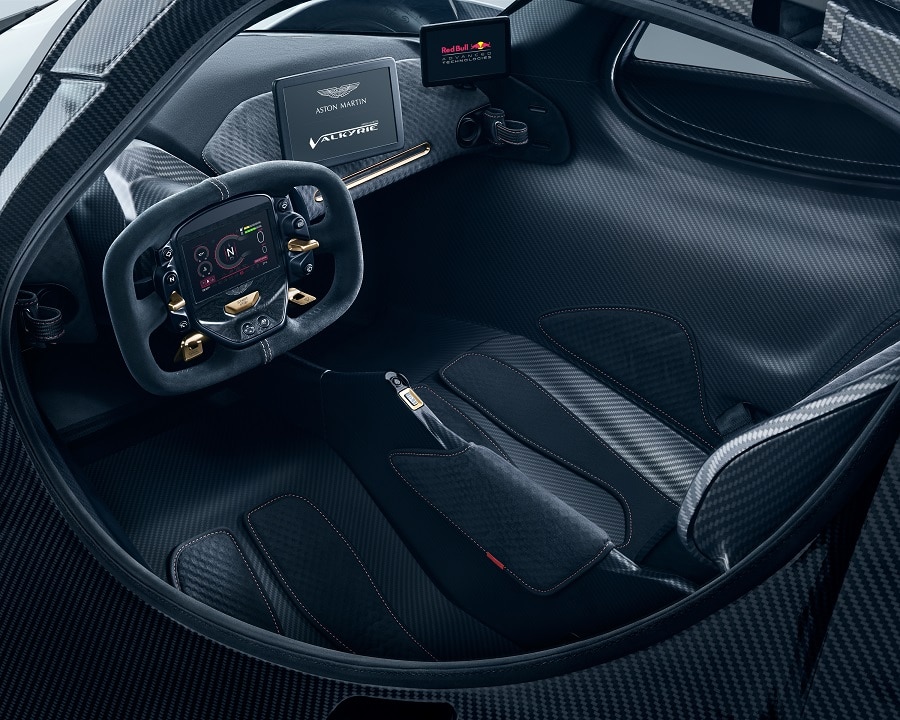 The steering wheel is quick release, and has the paddles taken from a Formula 1 single-seater. Then there is only a screen that reproduces the images of the rear-view cameras, as for aerodynamic reasons the classic mirrors are replaced by very small cameras. The seats are then directly bolted to the carbon fiber frame, e the driving position is the same as in a Formula 1: feet up, sitting lower than the feet and very stretched out.

The doors are new, and the weight of the Aston Martin Valkyrie is “marginally” higher than the coupe

The biggest difference is obviously the presence of a removable roof on the two passengers. As it is easy to imagine, however, this is not an electroactuated system. In fact, on the roof there is the air intake for the engine, as on the single-seaters, so finding space for an electric and foldable system was simply impossible. Therefore, Aston Martin has thought of a single panel, very light, in carbon fiber, removable and storable in a dedicated compartment manually. 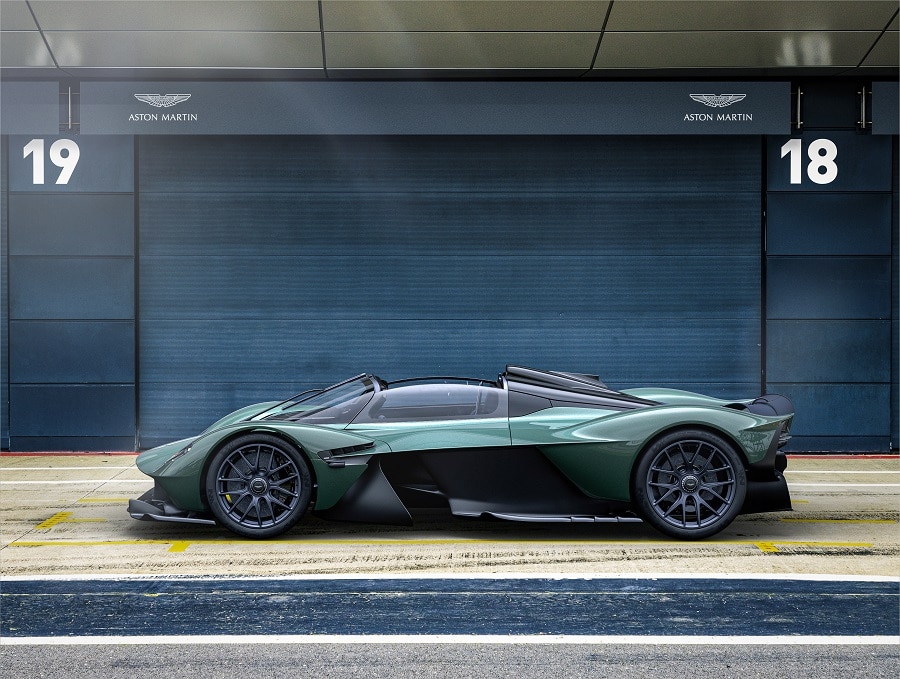 This novelty, however, forced Aston Martin to modify the upper part of its car a lot. Aston Martin Valkyrie Spider has in fact undergone several small changes to the bodywork to avoid damaging the well-kept flows that run through the entire body.. The biggest news, however, concerns the doorman. On the Valkyrie coupé, in fact, the doors are gull-winged, to allow for as comfortable entry as possible. For obvious reasons, this choice cannot be carried over to the uncovered version. How to do it then? 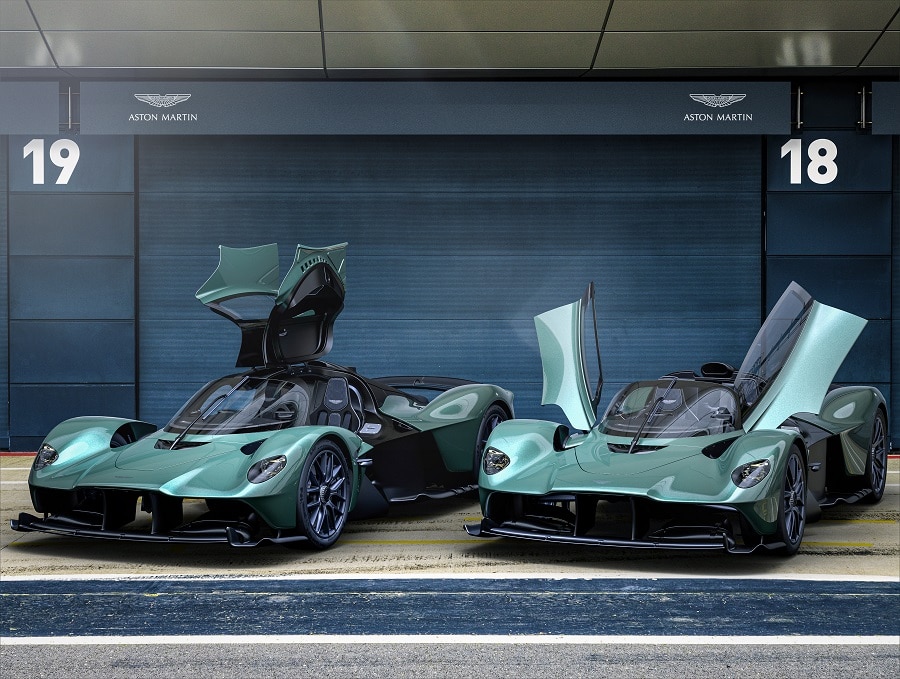 The technicians have then completely redesigned the doors of the Aston Martin Valkyrie, which now sports front hinges and a scissor opening, which maintains an easier entry than a classic door parallel to the ground. Despite this redesign and the mandatory reinforcements to the frame, necessary to recover the structural rigidity lost with the “amputation” of the roof, Aston Martin claims the Valkyrie Spider is only “marginally heavier” than the Coupé version. And since the merit of such effective aerodynamics goes to the bottom and the diffuser, aerodynamic efficiency is hardly changed at all. And also the performance they do not change much: with the roof closed, it will be possible to exceed 350 km / h, while with the roof open the maximum speed will be “only” 330 km / h.

But how much will it cost? And when will it arrive on the road?

Despite the loss of the roof, therefore, Aston Martin Valkyrie Spider does not lose a shred of its character. A character forged by the experience of one of the greatest designers in the world, and by the desire of a company to demonstrate to the world that it is alive, strong and increasingly ambitious. Aston Martin Valkyrie, both Spider and Coupé, is the first car to bring truly Formula 1 technologies and solutions to a road car. Valkyrie promises to be the first car capable of bringing the level of technology and speed …