More than a NAS, this Asustor Nimbustor 2 seemed to us a small server, usable not only for storing back-ups and data or as a multimedia station, but also as a professional device to manage websites and databases. A device that makes ductility its main feature

The acronym NAS (Network Attached Storage) means a device that makes available to users a mass storage accessible via the network. A sort of memory expansion connected to the internet rather than the USB port and always available for eventualities. But the NAS Asustor Nimbustor 2 appears to be capable of much more. In fact we are in the hands a small server which can be used simply as a back-up device, but also as a home media center or as a web server or to manage a database. The possibilities are limitless thanks to the ADM 4.0 operating system and the App Central store. Whether you are looking for a product for home use or for a small professional studio, this could be the right place: here is our Asustor Nimbustor 2 review. 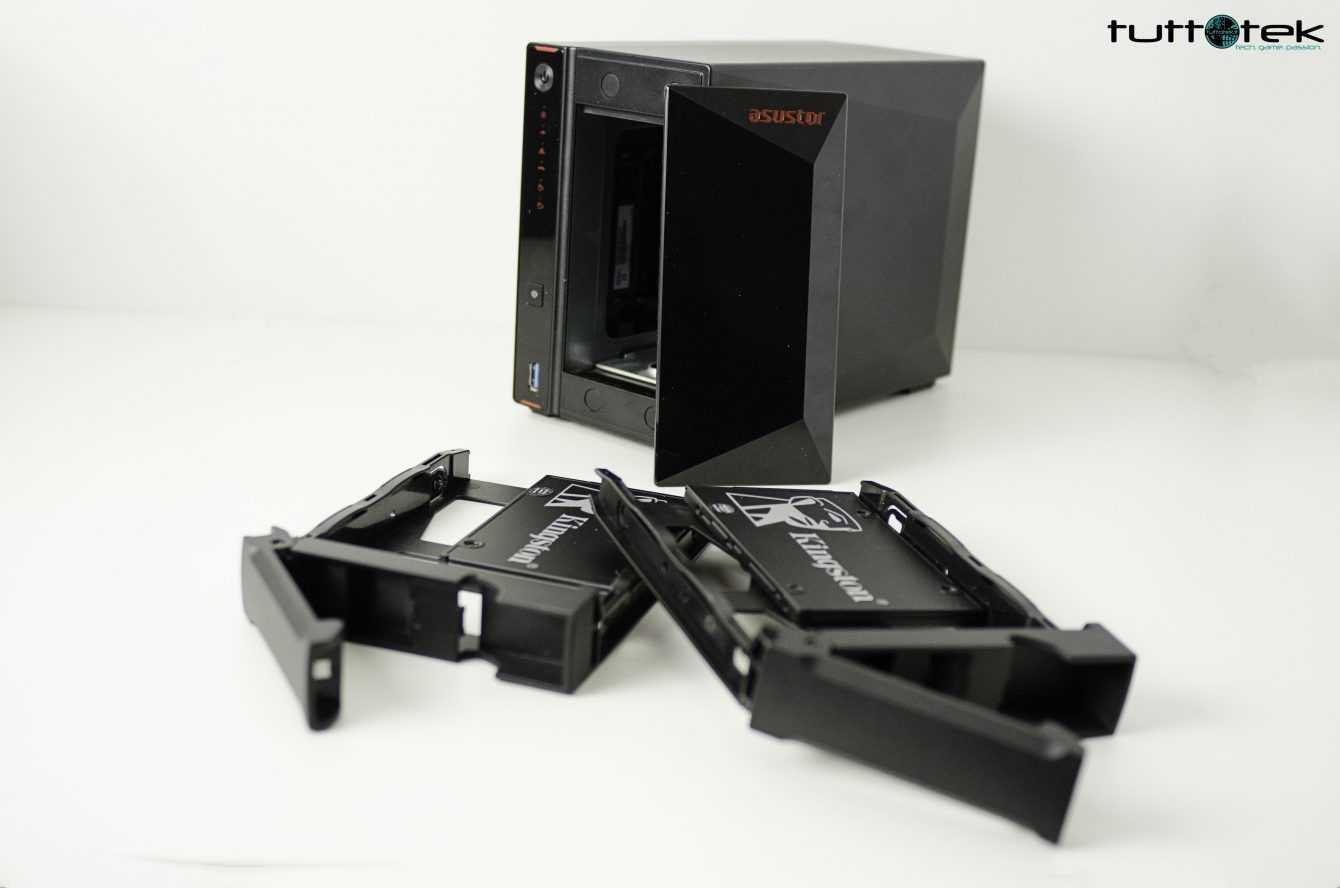 The potential of this evolved NAS lies precisely in its technical data sheet which includes hardware closer to that of a low-end PC than to a real NAS. Under the body we find a processor Intel Celeron J4125 2C / 2T with frequencies up to 2.7 GHz accompanied by 2 GB of DDR4-2400 RAM memory. While they don’t look like much, these specs are in line with the best NAS on the market. Let’s find one USB Type A 5 Gbps port on the front and two USB 3.2 (Gen 1) ports on the back, as well as an HDMI 2.0a output that allows you to transmit 4K HDR streams directly from the NAS to the TV thanks to 10-bit 4K hardware decoding, HEVC decoding and 10-bit Profile2 VP9 decoding. The connection to the router can be made via the two 2.5 Gbps Ethernet ports (RJ45) which can be combined – if the router supports the functionality – to obtain a bandwidth of up to 5 Gbps, equivalent to more than 500 MB / s. More than enough bandwidth for most applications. They are supported up to 28 TB of storage compatible with Single Disk, JBOD, RAID 0 ,, RAID 1, EXT4 and Btrfs. Testing it with two Kingston SSDs and a Technicolor Smart Modem router we achieved transfer speeds of approx 30 MB / s under Wi-Fi and about 100 MB / s over Ethernet.

Asustor Nimbustor 2 is made of fairly solid plastic. Asustor ensures that the NAS was tested to withstand shocks and vibrations. The drawers for the hard drives are hidden by a removable magnetic cover with a glossy finish that gives a touch of value to the device, but unfortunately attracts a lot of finger dirt. Also on the front we find the power button and various status LEDs. On the back, however, we have the connection ports and a fan that must cool the internal components. Here we have to make the first note: when it runs at medium or high speed the fan is quite noisy and annoying. the management softwarene in automatic mode tends to make it run often at high speeds even for no reason for whom we recommend to force low speed if you do not intend to stress the device. 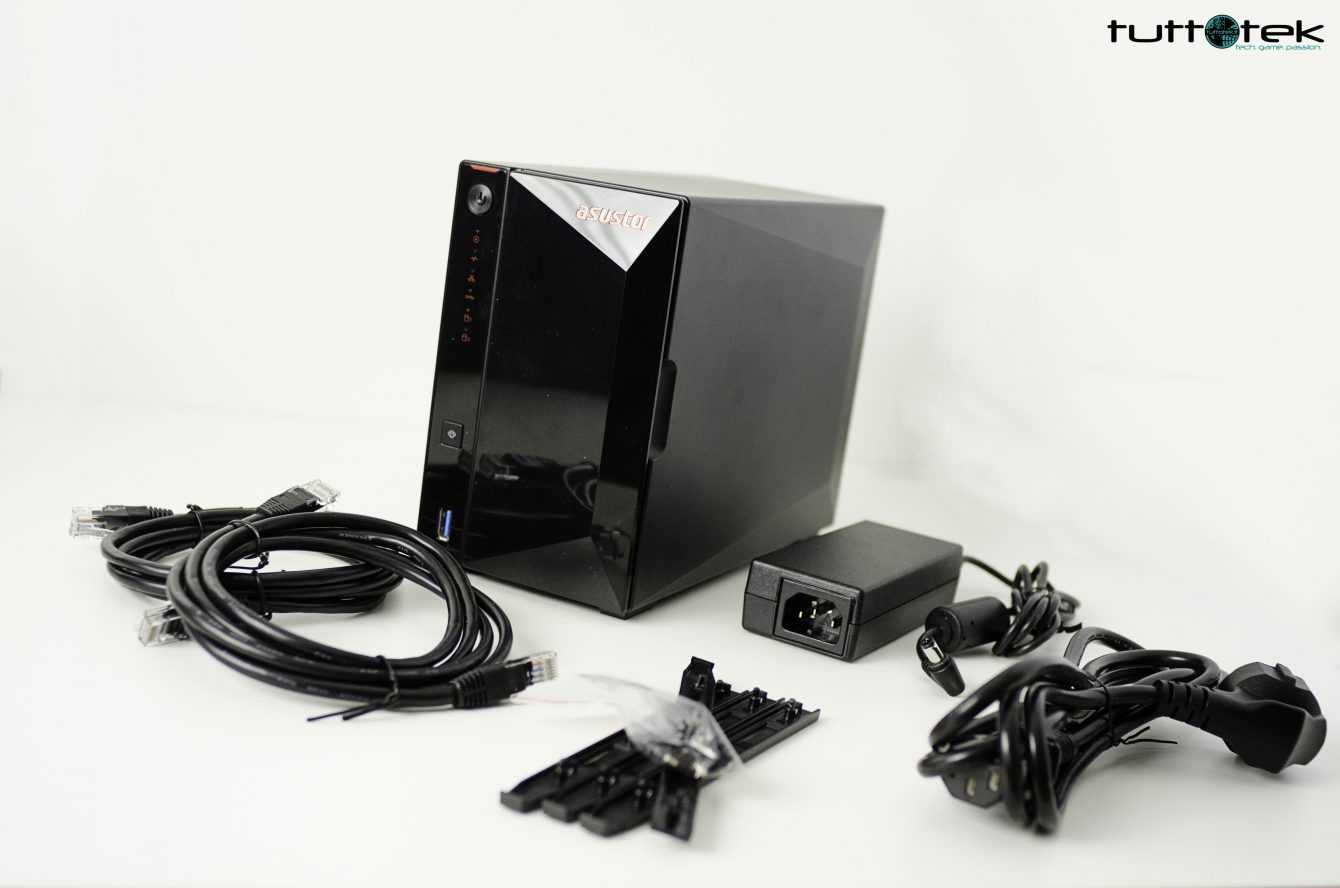 The instructions supplied are minimal, but useful. In any case the assembly of SSD or HHD is very simple: once the drawers have been removed you can easily fix the memory in the housing and reinsert it. A note of demerit: the drawers are not very smooth. Then we will need to connect the NAS to an Ethernet port on our router. Once this phase has been completed, it is possible to proceed with the ignition which takes place in a few seconds. From now on you can find the NAS at 192.168.1.8 in your local network (also via Wi-Fi connection). You will need to initially configure the device via the web interface or smartphone app. This procedure also takes a few minutes and essentially involves entering a username, password and a few other steps. In short, we can really talk about a user-friendly device, even for less experienced people. 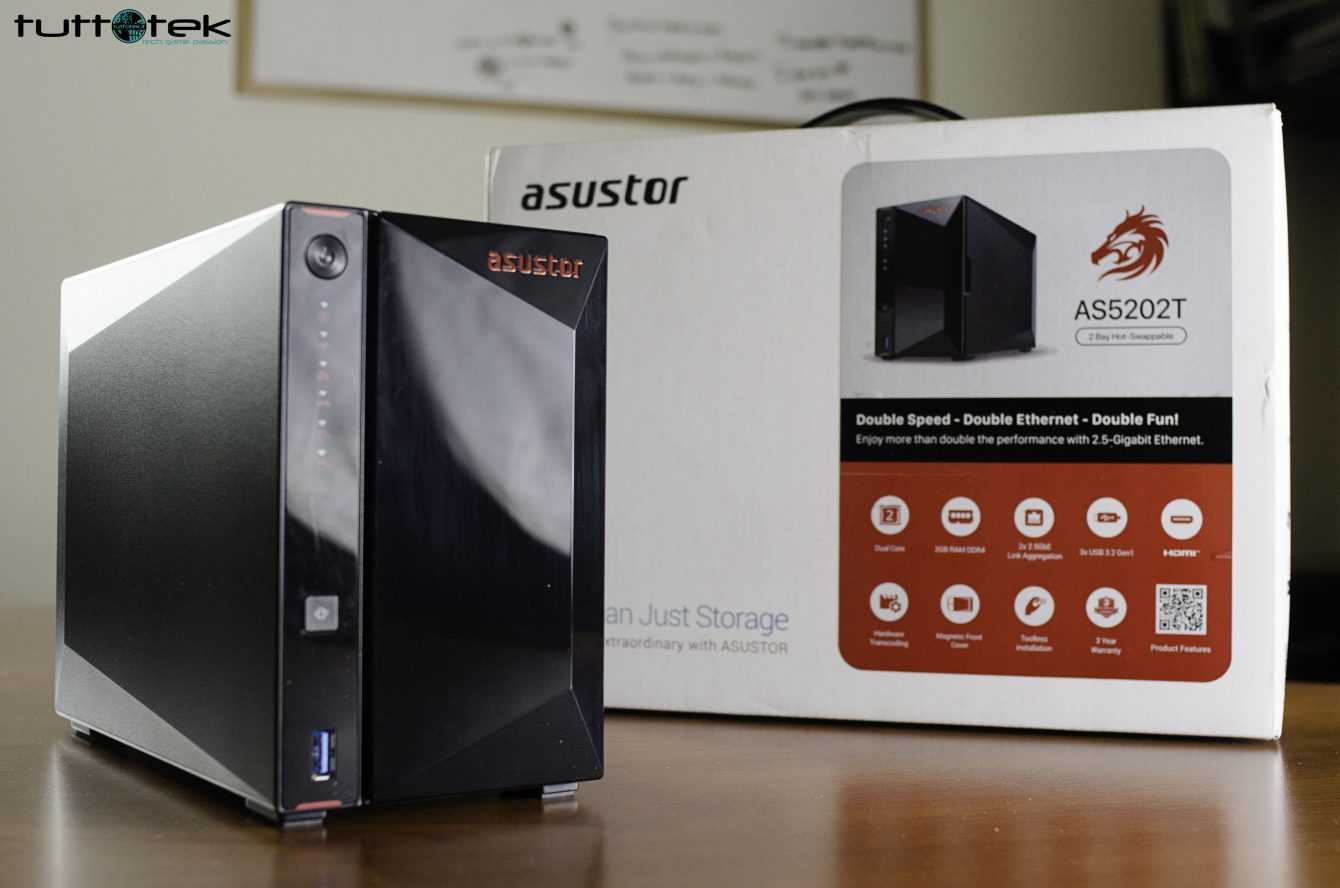 Unfortunately there are some limitations. The smartphone app is convenient, but the functionality is limited: in practice you can only check the status and settings of the device, but it is not possible to upload files. However, by installing other official or third-party applications – which we will see shortly – you will be able to access many features. The Windows PC app just doesn’t work, cannot find the device. The web interface is certainly the best method at this point to access the functionality of the NAS. The impression is that of accessing a simple operating system – in fact it is, based on Linux. On the home screen we will find all the applications, both the pre-installed ones and those of third parties that can be installed from the store. On the top instead there is the application bar that shows the open ones. We can assure you that it is quite simple to learn how to use it. From this point of view we are satisfied, even if there is some work to be done for the integration in smartphones and Windows 10. 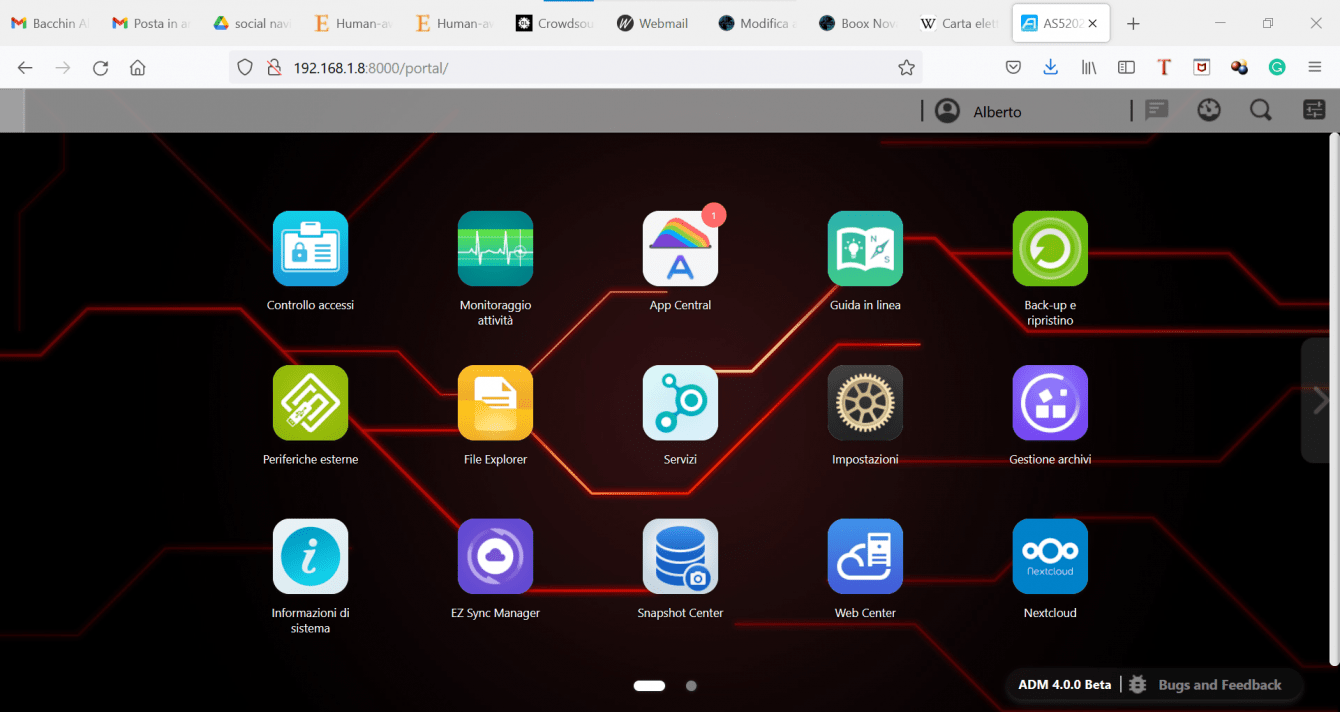 The lion’s share of this NAS is certainly the ADM 4.0 operating system that we have already briefly introduced previously. In fact, it is what turns a simple hard drive wrapper into a server. The built-in applications offer all the basic functionality to monitor Asustor Nimbustor 2 activity and manage low-level storage devices. A file manager allows us to upload our files and it is also possible to set the Web Center to use the Asustor Nimbustor 2 as a small server. Thanks to EZ-Connect it will also be possible to access the NAS remotely and with EZ-Sync it will be possible to synchronize PC and smartphone content with the NAS for back-up purposes. In short, all the basic features of a NAS that works well on this Asustor Nimbustor 2. All procedures are semi-guided, but some skills will still be required, especially to configure the web server. Apps run through docker mostly and then can be managed through web or app interfaces. The NAS can be comfortably used by multiple users at the same time, but obviously don’t expect miracles given the limited RAM and processor power.

In addition to EZ-Sync, the NAS Asustor Nimbustor 2 is equipped with a real file manager that allows you to spostare i file tramite drag&drop and then to create remote copies. Very simple and functional. Unfortunately the file manager is a bit limited, for example it doesn’t show the preview. However, there are alternative apps. We tried for example Nextcloud, an application that allows you to create your own personal cloud through the NAS. The configuration is quite simple and once completed we will be able to load the contents from any device, share them and view previews of many types of files. 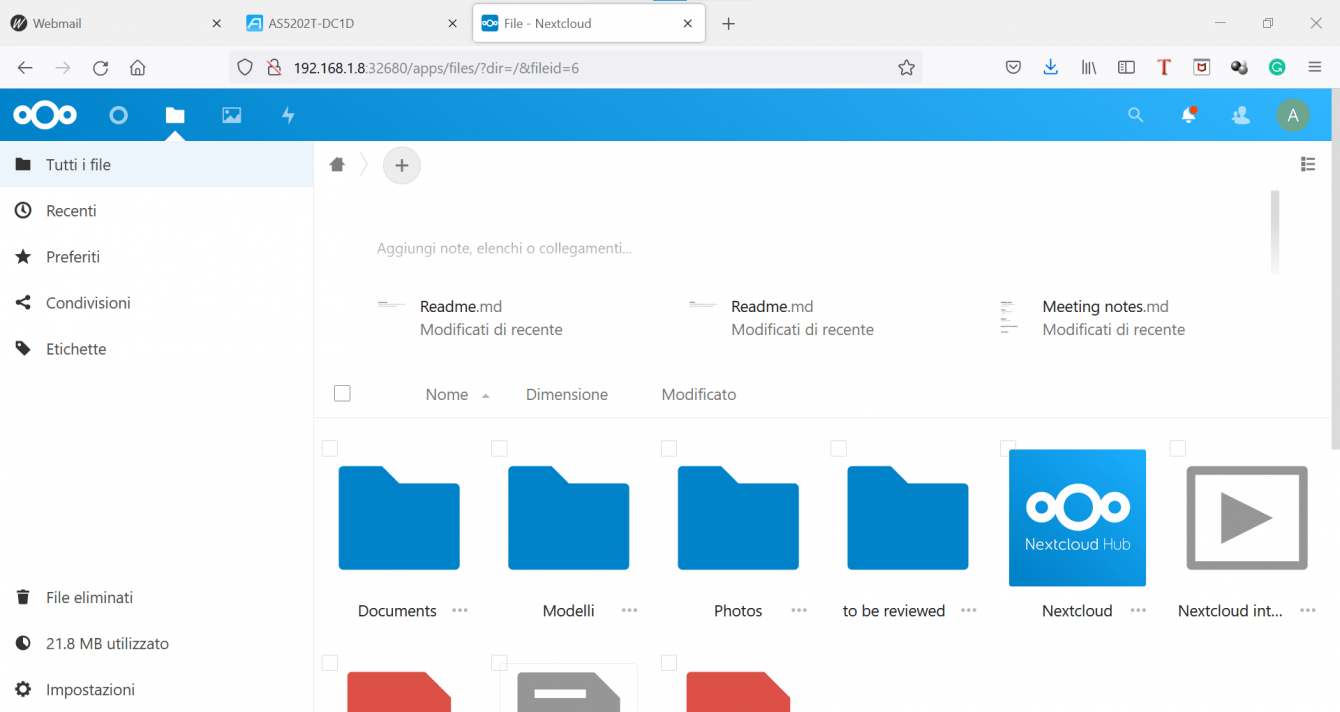 One of the most popular uses of NAS at home is as a media center. I remember how a decade ago or perhaps more the cabinet under the TV was swarming with DVDs. Then we moved on to external HDDs, much more comfortable thanks to USB. Today the NAS is certainly the most convenient solution. In fact, thanks to the home network, it is possible stream multimedia content directly to the TV. There are several possibilities to do this via Asustor Nimbustor 2. We have tried l’app Plex, one of the most popular apps for managing digital libraries. The setup is simple: just put the files in the appropriate folder and they will be found automatically in the app. After registration, you can install Plex on TVs and mobile devices so you can see your content wherever you want. The experience is very good, only some sporadic lag. To completely eliminate the problem, especially with high bitrate video, you can use the HDMI output of the NAS: very convenient and functional. 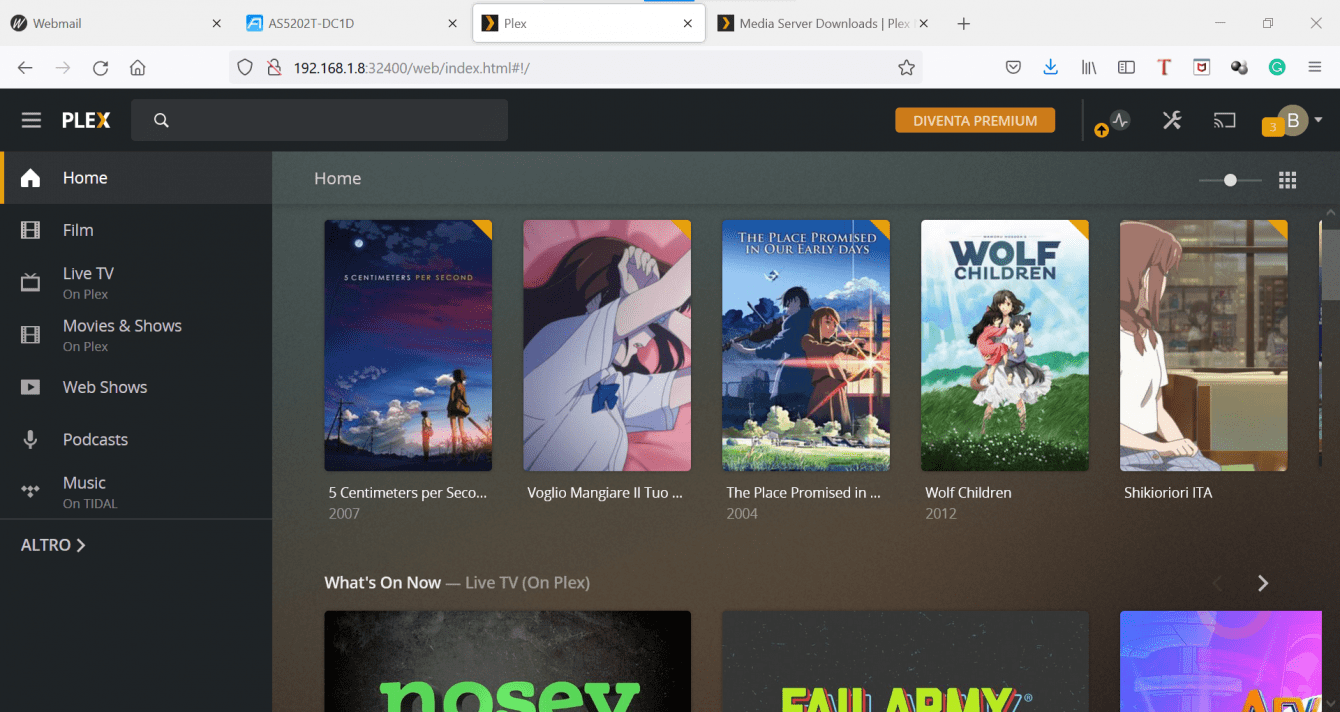 Each website has a server, large or small. With Asustor Nimbustor 2 you can manage your website without having to pay rent to an external host. Of course we can’t expect to handle large workloads, but a small business website with just a few pages runs decently. Apache HTTP Server runs well and can manage even a small business management system. Among other things there is also the possibility to install un database PostgreSQL through the graphical interface pgAdmin 4. In any case we will also have access to the SSH terminal, as in a classic Linux PC. You can also run Python scripts if you want. 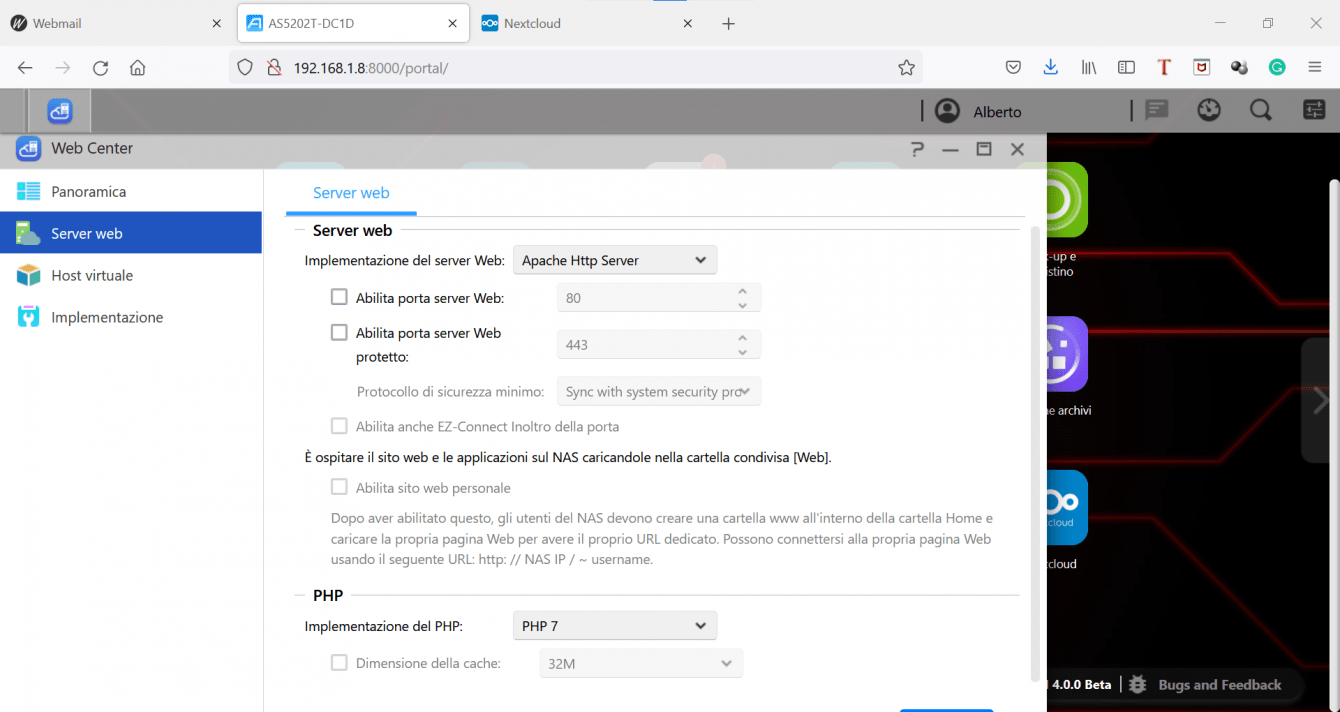 As anticipated there is no single smartphone app through which to manage everything, but there are many different ones to manage videos, photos, music, data and many other aspects. On the one hand it is good because you download only what you need without clogging the phone, on the other hand it is a bit inconvenient not to have a single app that collects the different features. Many of these need to have their counterparts installed inside the NAS to work. There App UI in general is a bit sparse, perhaps not too elegant and in step with the times. But the features are well implemented. The AiFoto 3 app, for example, is very convenient for creating a back up of the photos we take with the smartphone and organized in a similar way to the “Gallery” of smartphones, sorting the photos by date and giving the possibility to create albums.

On the safety side, we are very satisfied. In fact, in addition to the AES-256 encryption of files, we have in fact many levels of protection to guarantee high security standards. In fact, a firewall and a ClamAV antivirus. It will also be possible to take advantage of VPNs to feel safer. It is also possible to isolate important files and folders and activate two-factor authentication. But after all, these are things that a lot of commercial PCs offer.

Asustor Nimbustor 2, being designed for the storage of sensitive and important data, offers additional features. First of all we have the ability to monitor all activities so that we can easily trace suspicious activity. Since the only way to truly protect data is redundancy, Asustor Nimbustor 2 offers the ability to Easily back up the NAS to external servers or physical media. You can also program some snapshot that save the system status periodically (for a maximum of 256 snapshots) and allow you to restore the system in case of malfunctions. We can be satisfied with the protection provided. 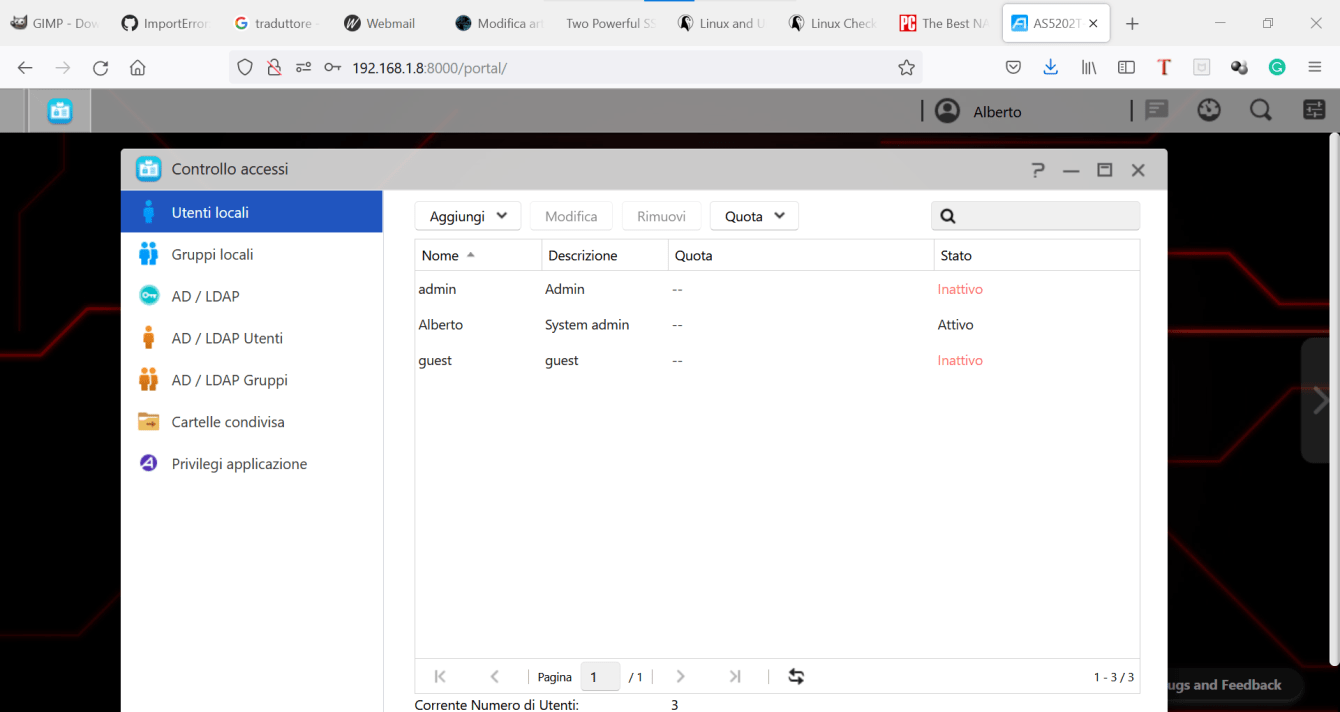 We found ourselves in front of a NAS which is in fact much more. The store really offers a lot of apps ranging from the world … 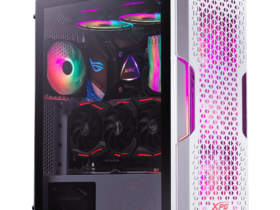 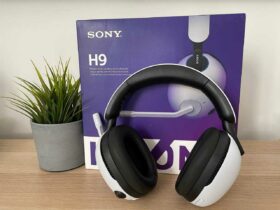 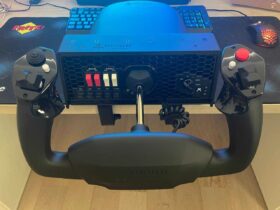