The best books of 2020, i.e. the best readings of the year by the editors of the Library section. Here are the ten titles that made this difficult year better.

Premise: the titles are not all released this year, this is a ranking put together by the editors of our section that we hope will give you ideas to include in your wishlist.

We are running out of 2020, and like every year it is time to take stock. This was probably the busiest year in the lives of many of us; we have lived through twelve difficult months, and the hope for 2021 is certainly high.

We of the library section we want to take stock of the end of the year, and being lovers of reading we certainly could not fail to draw up a list of best titles that accompanied us in 2020. Here is our ranking of the ten best books and comics read this year.

Let’s start our top ten with i five best books read in 2020, which will be followed by the five best comics. Enjoy the reading!

This book of Daniele Palmieri speaks of a cat, to be precise cynical cat, who one day decides to steal a diary from his master to tell us about his amazing adventures. This book is about a journey between the past and the present of the cynical cat.

Our editor Sonia she recommends this book for personal reasons: four years ago her family was given a cat … their first cat. Often, says Sonia, she found herself observing this solitary and mysterious creature, wondering what was going through her head; and here in his life has entered “Diary of a cynical cat” to give voice to Morgan, his black cat. We recommend this book to everyone, cat lovers and not, because it is truly magical to observe the world through the eyes of this cynical feline.

A girl like her it is a love story, a story of revenge, a story that encourages the reader to never give up in the face of any difficulty.

Chloè and Sanji they come from two different countries, but they have something in common: Deepak, the man who operated the old manual elevator of a building on Fifth Avenue. A series of events will cross the lives of our two protagonists, a series of misunderstandings will risk making them estranged.

We recommend this book because Marc Levy, for his writing style, is definitely a guarantee. The thing we certainly like about this author is his ability to write about many topics; he is a writer who has no genre. We recommend this book to romantics, to those who believe in destiny and those who always try to see the glass half full even in the most difficult moments.

The Missing of Moonlight | Best books 2020

Second book in the saga ofThrough mirrors, The Missing of Moonlight takes us into the heart of the story between Ofelia and Thorn, destined to get married despite never having seen each other before and despite their totally different personalities. In this second book, our protagonist begins her new life on the ark of the Pole, and precisely at C.itta-Heaven, where the marvelous rooms and the very rich decorations are nothing but illusions created by the powers of the gods Mirages, the ruling caste of this ark. In this new scenario, Ofelia will learn about the intrigues of the families who live in this palace of illusions, paying attention to the various feuds between families and envy, which on the Polo can also be paid for with life.

We recommend The Disappeared of Chiardiluna because it is a book that, with its simple narration, will be able to transport you into the vicissitudes of the protagonists; we are sure that after reading it (but not before having recovered Winter’s Boyfriends, the first volume) you can’t wait to read the other two chapters of the saga as well.

We all know Liliana Segre, a life senator of the Italian Republic who survived the Holocaust. Its story has reached everyone thanks to the commitment of the latter, which absolutely did not want to let such a genocide be forgotten. Memory makes you free, written by Segre thanks to the collaboration with Enrico Mentana, collects the story of Liliana, who as a free child finds herself first interned in Auschwitz, and then a free teenager who will have to deal with the traumas that a similar experience inevitably leaves.

We recommend this book because it is not just a chronicle of what happened; in this reading, Segre allows us to see much more than is normally told: depression, the difficulty of returning to a normal life … all aspects that we may never have given weight to when listening to the stories of the survivors.

This short story, written by Antonella di Pierantonio, is about a young girl whose name is never mentioned; the protagonist will in fact always be defined as the “arminuta”, “the return” in the Abruzzese dialect. This nickname could not actually be more suitable, since this book speaks of a return to the origins.

The young protagonist, at the age of thirteen, discovers that she is not the biological daughter of her parents and is sent back by her real family, a fairly large nucleus that lives in the Abruzzo hinterland. The change could not be greater for a young girl: accustomed to luxury and practically served, the arminuta will find herself living in destitute conditions, and will have to forge a bond with people she did not know existed until the day before. .

We recommend this book because the author’s style will make you feel at home: the dry language and the clear chronological narration of the facts will allow almost every reader to experience first hand the daily life and the difficulties of the young “returned”.

Finally, here is our selection of the five best comics that have accompanied our 2020.

Let’s talk about the news of Weekly Shonen Jump for 2020, which presented an unusually long list of titles this year. Between newcomers and veteran mangaka with their new proposals, a novelty, signed Yoshifumi Tozuka, above all it stands out for its dynamism and the aspirations of a great combat shonen: let’s talk about Undead Unluck.

In Undead Unluck, you never have a breather, never a dead moment. Chapter after chapter, the universe of the work is expanded, with new characters, powers and elements of the macrotrama. Basically, after capturing us with explosive and crazy action sequences, like a textbook shonen, the manga convinces us to stay thanks to the increasingly solid and intricate foundations of the history of its world.

The two protagonists Andy e Fuuko, while in completely different ways, they are both over the top. The self-confidence of the immortal man and the nerdy character of the coprimaria complement each other, making their interactions never boring. The leitmotif of the work is theirony, but there is no lack of pathos and moving moments: even here, as per the textbook.
Yet despite the canon adherence and relatively classic skill system, Undead Unluck has a clear identity of its own, tangible in every board. With such energy, its success as it spreads to countries outside of Japan, and when it conquers the animated media, is virtually guaranteed. Too bad only for the ecchi component, which is no longer perceived by a part of the Western public in the same way as ten or twenty years ago, and has already attracted some controversy about the work.

We recommend Undead Unluck as a high quality product, at the moment, probably, the novelty of Jump of 2020 closest to reaching the Olympus of great manga. 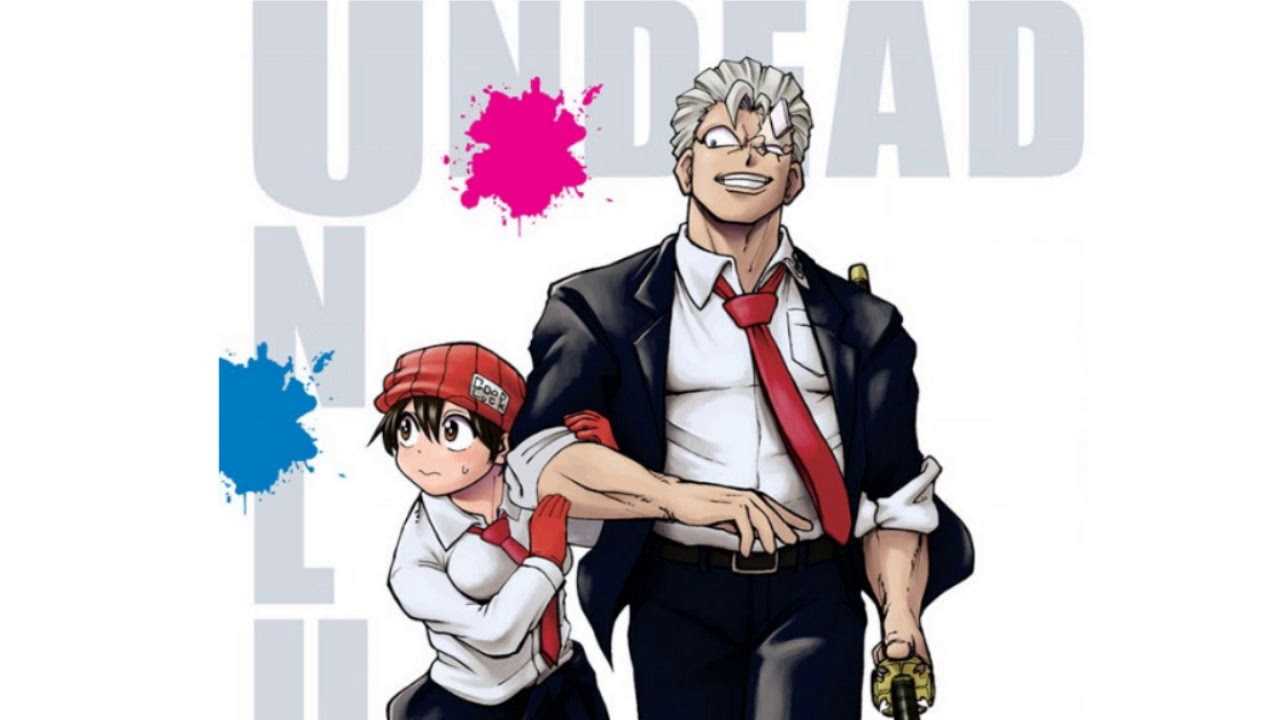 Chainsaw Man made his debut in 2018, but over the last year his popularity has skyrocketed, and unexpectedly for the same Tatsuki Fujimoto. So much so that, from the conviction to definitively conclude the manga in a short time, he has changed his mind. In fact, the finale a few weeks ago has turned into an “end of the first narrative arc”, with an expected return on Jump +. A success of this kind must be sought in the retro graphic style of the work, but not only. In its being a horse between shonen and seinen, is as much appreciated by young adults who are transitioning between the two genders as by adults themselves, looking for something light. These two elements have sometimes brought him close to Dorohedoro, manga that is reliving thanks to the anime series.

Chainsaw Man is a merciless work, set in a rather sad world, and in which one often dies; it doesn’t matter if you are devil or human. The path of Denji the protagonist is somewhat depressing and made up of illusions and above all deceptions. Yet he pulls on and on fights to the endno matter how hurt his body and heart are. In Denji we see the portrait of a generation, and this is probably also what makes the manga so popular.

However, there is no lack ofirony, declined in black humor for the occasion – again, something that today’s teenagers love. Power has always been at the top of the popularity charts, a comic relief with a discreet but unique presence, also able to convey a bit of much-needed sweetness.
A manga to be recovered, waiting for new developments both on paper and animated.

Zerocalcare, who is devoting his life to writing, this year has been particularly prolific. Among new film and television developments, and now also on the web with the new Netflix series, 2020 certainly wasn’t a bad year for him, quite the contrary. In short, we also found it on newsstands with a series of dedicated statuettes.

Skeletons, released towards the end of the year, summarizes a new stage of artistic maturity for Zero. In fact, it is part of those volumes of his in which the space for self-contained gags and stories is reduced, in favor of an organic plot and very serious themes. After Forget My Name, after the reportages by Kobane Calling, Zerocalcare finally gives us the first great story set in “his home”, Rebibbia. It does so with a volume of unprecedented length, but which one cannot help but devour in one day, the story is so intense. From the very first pages, we understand that Skeletons is reserved for strong stomachs, with Zero finding a severed finger in front of his house, represented in vivid graphic and descriptive details. The following is a story of typical and atypical adolescence at the same time: it depends on where the reader grew up.

If in fact the fear of facing the university can be shared by many, only those who have lived in certain residential realities of the metropolis will know how much certain extreme situations of the story are instead pure everyday life. A…