BMW presented itself, or rather, presented the new iX M60 in live streaming from Munich during the CES event in Las Vegas. Despite the choice not to physically attend America, BMW presented two truly amazing innovations at CES 2022the. The first, almost muted compared to the real news of the day, is the B.MW Theatre Screen, a complete and never-before-seen entertainment system for the rear seats. The second and astonishing novelty is a special one BMW iX Flow: your specialty? Can… change color. No, really! Now we explain everything.

The presence of BMW was one of the most anticipated at the CES in Las Vegas 2022, which the House of Monaco had indicated as a reference point for some new revolutionary technologies on the way. The German company had a press conference and on-site experiences planned, but like many other companies, the very difficult situation of the pandemic with the spread of the Omicron variant of Covid-19 led BMW to cancel its physical presence in Las Vegas . However, this did not mean an abandonment of the American event: BMW has arrived at CES 2022, but in telematic form.

And, despite her physical absence and her experiences, she managed to bring truly innovative projects never seen before in the automotive world to the world debut. The first world premiere was that of the new one BMW iX M60, the second fully electric car revised and corrected by the Motorsport department. Capable of 619 hp, 1,100 Nm of torque and better speed performance than the new M3 Competition, we told you yesterday morning about the BMW iX M60. To find out more, you can click here or follow the link at the bottom of the page.

BMW brings the Theater Screen, a cinema for the rear seats, to CES 2022

Let’s move on to the others two big news brought by BMW to CES 2022, starting with the revolution for rear passenger entertainment. This is how BMW understands its new Theatre Screen, a solution that allows those occupying the rear seats to have access to a real one cinema experience… on the go. But how does it work, and what makes up this particular “moving cinema”? Just what you would expect: an excellent quality screen, a reference sound reproduction system and blinds that cover the light coming from the rear side windows and rear window. 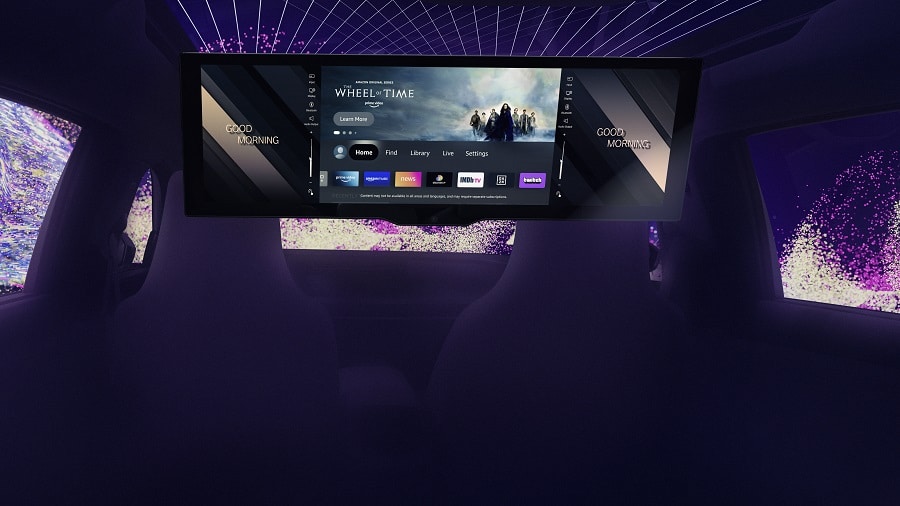 Let’s get our hands on immediately, specifying that unfortunately this is a prototype, an idea that could (and should) arrive in the future on the most luxurious BMW cars, but for this concept BMW has thought of everything. The screen of the “cinema” is placed flat on the roof of the car: when it is “awakened”, the motorized guides allow the screen to move towards the rear seats, rotate and be adjusted to the desired angle. At this juncture, the car will play music composed for the occasion by Oscar winner Hans Zimmer, and the curtains on the windows and rear window will close.

Once the environment is ready, the BMW My Modes Theater system will be ready for playback. The “in car” cinema system consists of one 31-inch ultra-wide screen with 32: 9 aspect ratio and 8K resolution, of the highest quality. Inside, there is the 5G connectivity and Smart TV features assigned to one Amazon Fire TV integrata in the display operating system. The system can play content in 16, 21 or 32: 9 via the Zoom function, and the Fire TV can go up to a maximum resolution of 4K. To control the contents and the Fire TV, it will be possible to use a remote control or through the touchpads positioned on the rear doors, but not only. 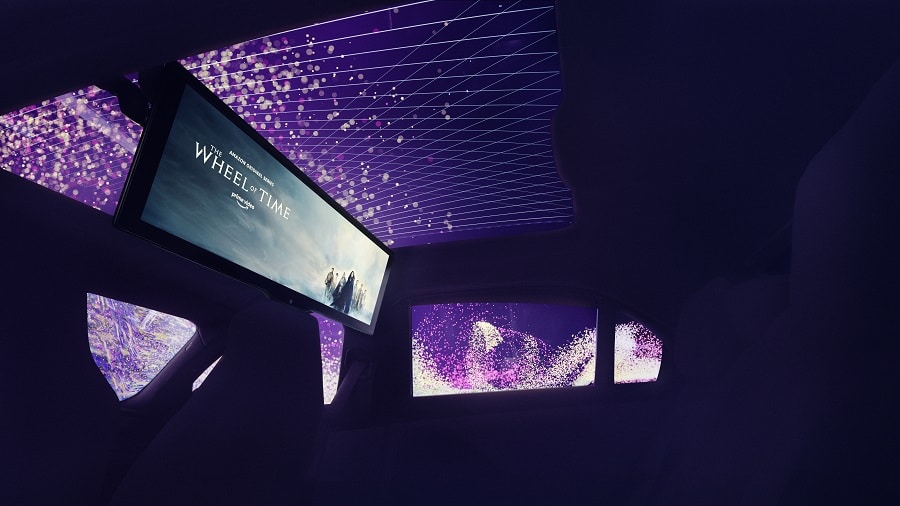 In fact, there will be controls integrated into the door handles, and physical controls on the sides of the screen, so as to allow all rear passengers to control operations at any time. The sistema audio Bowers&Wilkins Diamond Surround, already seen on iX and of incredible effect. Finally, thanks to the 5G connectivity, the reproduction of streaming content will be guaranteed in the best possible quality, similar to the home one with the use of Gigabit fiber.

Mind you, the self-propelled cinema designed by BMW is beautiful, and it will be a feature that we will be able to see very soon on the cars of the Elica. However, it was a very special prototype of BMW iX, which at CES 2022 showed an incredible function to say the least: one bodywork able to change color. But what kind of witchcraft is this? Our Fjona would say. Is called BMW iX Flow, and is an astonishing prototype of the German electric SUV covered in a unedited film, with a wrap that completely covers the bodywork. This film is made up of a so-called coating electrophoretic, known worldwide as E-Ink. 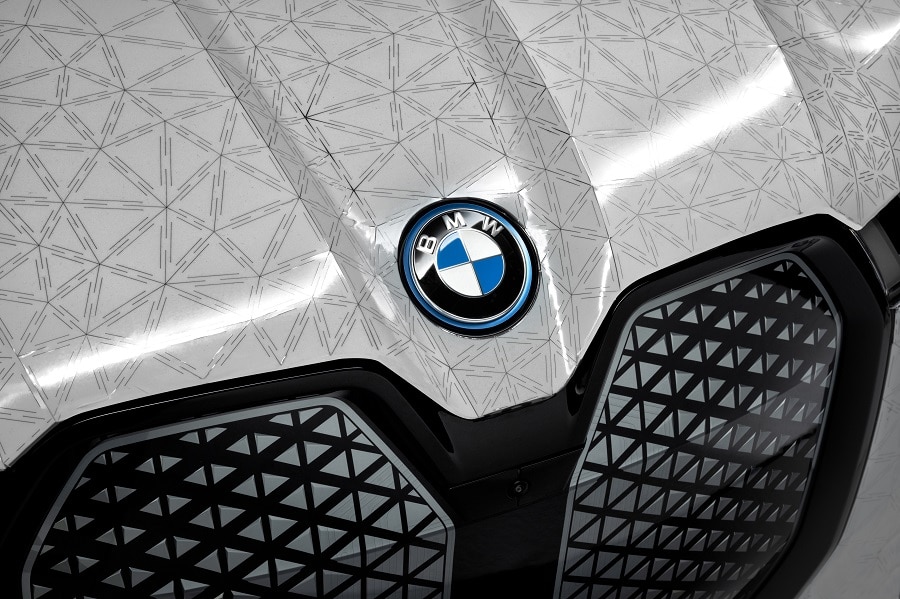 Yes, it is the same technology used on the e-book, only here it’s … much bigger. But how does it work? Its operation is as innovative as it is simple. Simply put, within the E-Ink film that BMW iX Flow is coated with are present hundreds of thousands of small micro-capsules, the diameter of a human hair, inside which there is negatively charged white pigment, and a positively charged black pigment. Depending on the chosen setting inside the car, the electrical system will send a very short impulse negatively or positively charged, which will stimulate the whole film. At this point, depending on the charge given to the electric field, the white or black pigments will be positioned in the external and visible part, suitably charged, of the micro-capsule, giving life to an incredible and almost magical change of color. 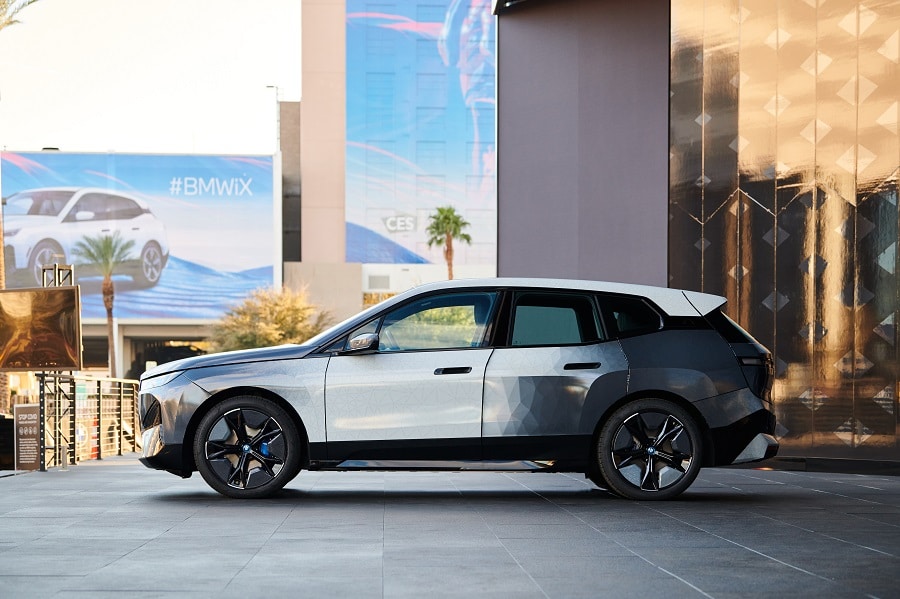 To achieve this, the iX’s bodywork was covered with dozens and dozens of ePaper sections, the paper containing the E-Ink, in order to allow the perfect adhesion of the “paper” and the electrophoretic ink to the lines of the car. But… what is all this for, you may be wondering? First of all, being able to change the color of your car according to your mood or tastes is something incredible. In addition, for BMW it can be a solution that aims at the maximum efficiency. How? By exploiting the phenomena of refraction and heat absorption of different shades of color. We all know, in fact, that white reflects heat, while black absorbs it more, as anyone who owns a black car knows in the summer … 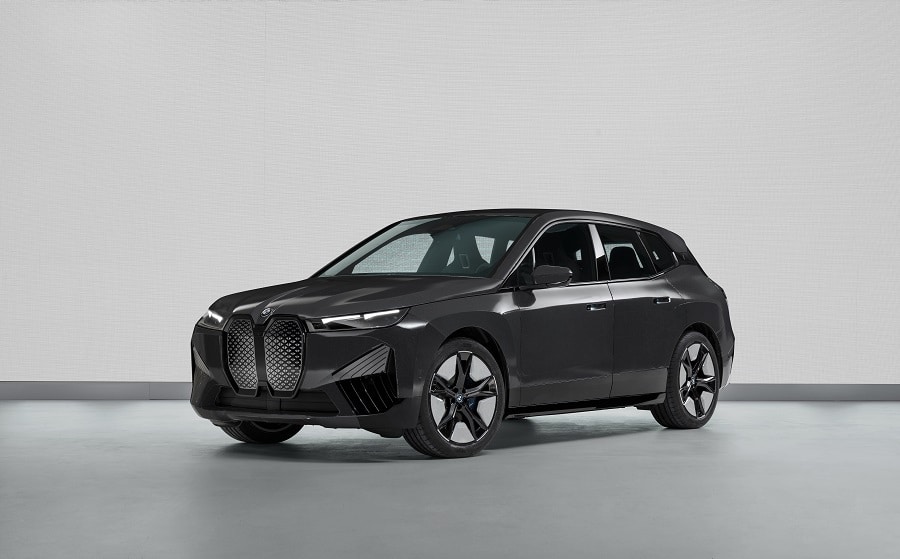 Precisely for this reason, BMW has tried to think “out of the box” in order to take advantage of these phenomena of absorption and refraction of sunlight. For example, BMW speculates how it would be possible to use a white paint job in the summer, in order to keep the passenger compartment and electrical components cooler. In winter, however, you could focus on black, to earn a few more degrees. In this way, the color of the car becomes important for efficiency, improving the autonomy and mileage of the car. In this way, in fact, it would be possible to improve the performance of the air conditioning system, and the thermal efficiency of the mechanical components.

When will we see these incredible news on the road?

It sounds like science fiction, but the idea, the construction and the photos of the car are all true. BMW really unveiled a color-changing iX at CES 2022. But before you plan to buy your next 5 Series with “on demand” paint job, calm the hot spirits. BMW has in fact immediately specified how this technology is still in its infancy, and will take some time to get to market. How much time? The technicians who worked on the project speak of “About ten years”, but we hope they can make it sooner. This technology could also have other uses, such as the ability to use logos, information or even advertising banners at the owner’s choice.

Addior therefore traditional paints? Well, it’s too early to tell. However, BMW brought a car to CES 2022 that really makes the viewer say wow, a true technological innovation. Without forgetting the new BMW Theatre Screen, an innovative solution never seen before, which could give a new development sector for the car. Just think, change the color of the car to see a movie at the “cinema” with your sweetheart … Science fiction for now. But not too much: it will soon be possible, we are sure. And you? What do you think? Would you buy a car with bodywork with an E-Ink “wrap”? What about a car with an 8K cinema in the rear seats? Let us know below in the comments – it’s your time.

Don’t miss the article dedicated to the BMW iX M60 and the test of the new iX! 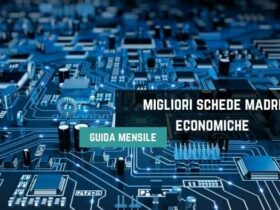 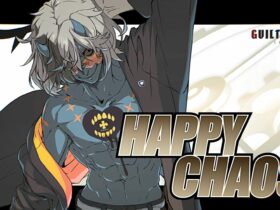